This month we travel out of this world to find out why half a century after Apollo 11 we no longer go to the moon. On a similar theme, if we ever found ourselves in deep space, who exactly would we meet and why are they avoiding us? Closer to home, we explore the wilds of Yellowstone in pursuit of wolves, the British countryside and much more besides… 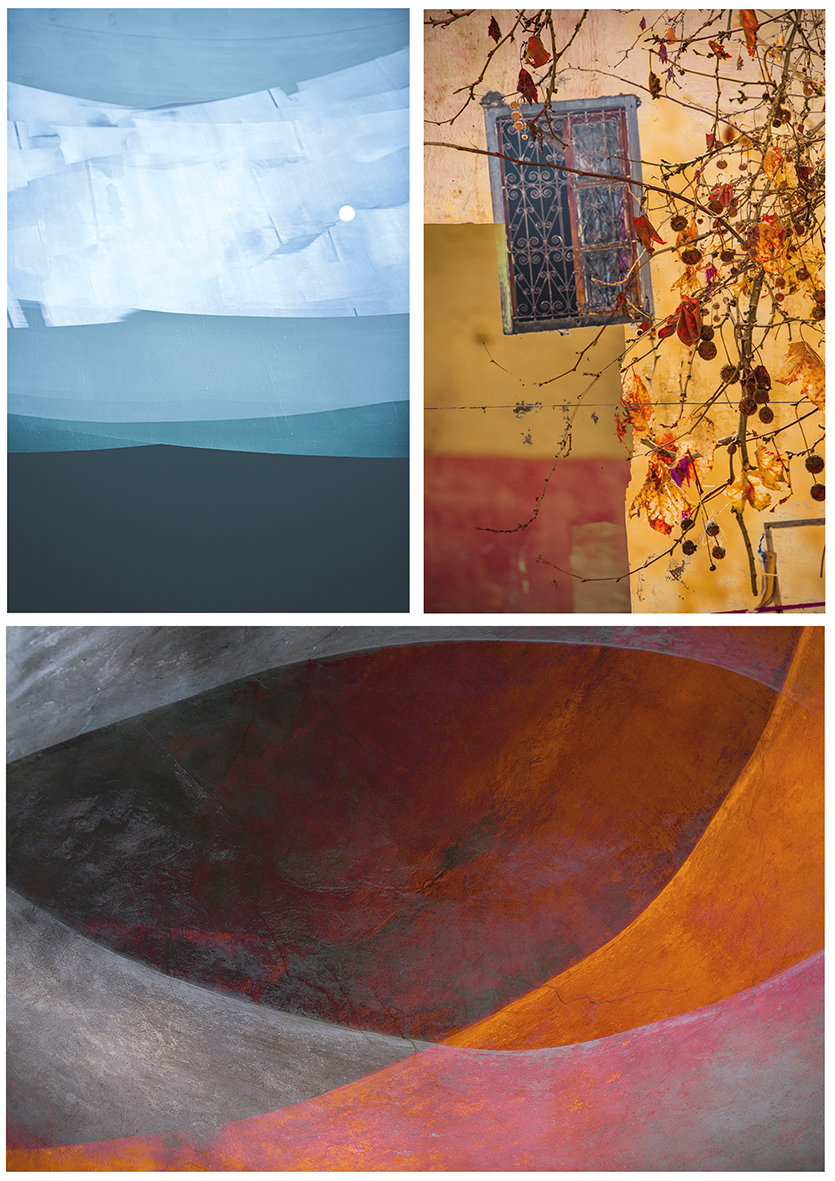 A selection of images from Abstract Mindedness 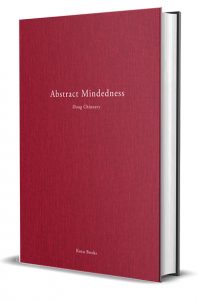 For anyone wondering what abstract photography is, put in its simplest terms it’s camera-produced imagery that doesn’t look like conventional everyday photography. The usual ‘real’ things you see in photographs are absent, with the images concentrating more on visual ideas such as colour and shape. More than that, abstract photographs don’t represent anything in a literal sense and don’t necessarily have a direct meaning that will be the same to everybody looking at them. For anyone wondering what its purpose might be, I can only point them in the direction of Doug Chinnery’s stunning new coffee table book Abstract Mindedness, which is a feast of contrasting atmospheres, moods, colours and emotions. And it’s fantastic.

The title of Chinnery’s book works well in uniting the idea of photography as abstract art with the reason he created it in the first place, which was that in April 2018 he had what his GP diagnosed as a ‘breakdown’. Abstract Mindedness is a year’s worth of images created by the acclaimed photographer as a mode of therapy, as well as to communicate to others something of the ordeal he was going through. He admits in his introduction that while his encounter with deteriorating mental health might not have been as bad as others suffer, there were times when he regretted taking on the project, feeling there was little worth to his work.

In this Chinnery was simply wrong, because this limited edition portfolio is alive with creativity that is wide-ranging and uplifting. It may seem strange that such joyful and expressive imagery comes from a man who was at the depths of depression. But knowing his story, you can feel the healing power of his work slowly putting the man back together. Of course, it’s not all bright colours and pleasing shapes, but the contrasting darker images contribute to a story that is supported by his own poems. As well as being apex abstract photography, it’s also powerfully and genuinely moving. And as if that’s not enough, Chinnery is donating any profits from his book to the Young Minds mental health charity. 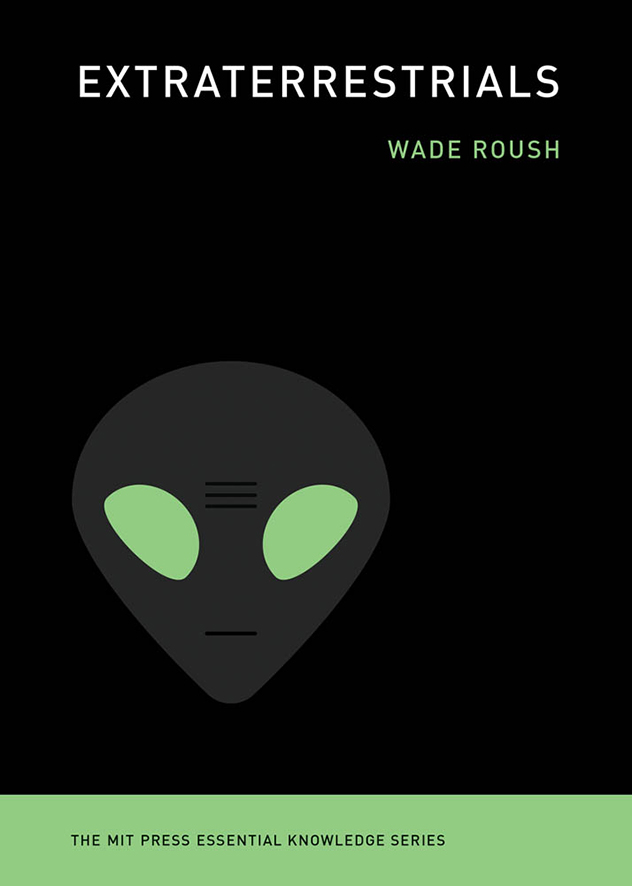 Everything we know about how planets form and the origins of life itself seems to suggest that there’s nothing new or unique about humankind. And yet, here we are, alone in the vast reaches of the cosmos with nobody to talk to. Most mathematicians, statisticians and space scientists agree that it’s just not possible that there aren’t other intelligent civilisations out there somewhere. So, the big question is: “Where on earth – or rather, not on earth – are they?

It’s a question famously attributed to the nuclear physicist Enrico Fermi back in 1950, and the so-called ‘Fermi Paradox’ has been at the forefront of our minds ever since. The search for a modern answer to the paradox is the subject of a brilliant new book – Extraterrestrials – by Wade Roush, who examines pretty much everything there is to examine in his quest to solve the riddle: from the earliest and bizarre speculation to current thinking by reputable astronomers and astro-biologists. He covers the emergence of SETI (Search for Extraterrestrial Intelligence), the increased use of radio and optical instrumentation, as well as exoplanetary research. But the book’s highlight is his examination of the Fermi Paradox itself (that he summarises as: “Are we alone in the Universe? If not, where is everybody?”). You’ll be amazed at how a little simple logic throws out some profound conclusions. 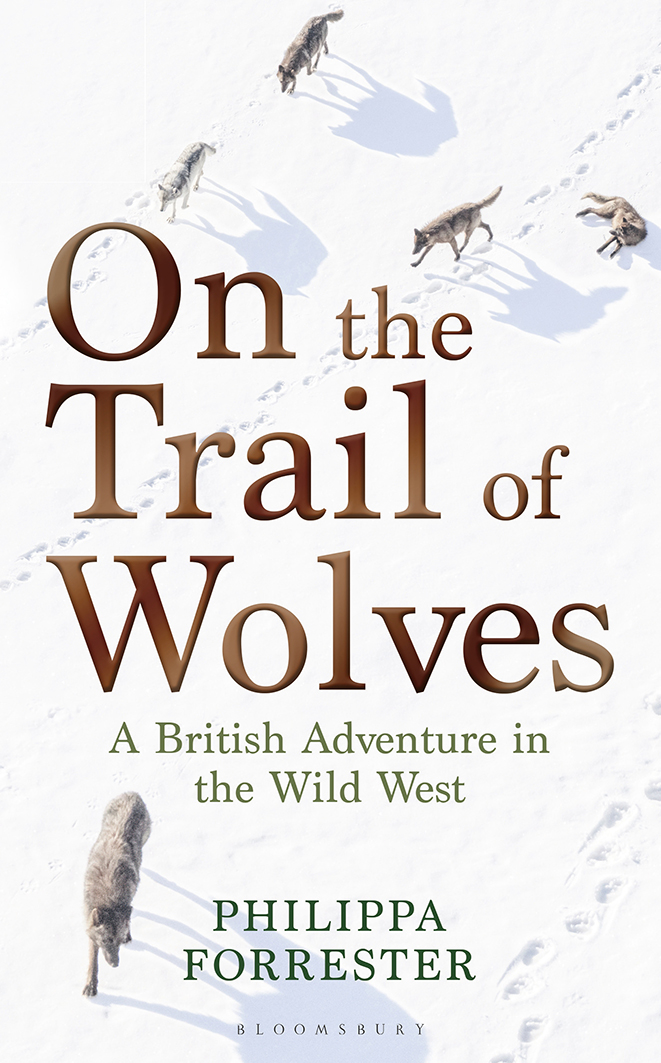 ‘On the Trail of Wolves’ by Philippa Forrester, Bloomsbury, £17.99, hb

When BBC TV presenter and producer Philippa Forrester moved to the wilds of Wyoming, the sound of wolves in the nearby wilder-ness rekindled her lifelong interest in these large, almost mythical canines. But as she settled into her snow-clad log cabin in North America, she discovered that her new neighbours didn’t share her positive attitude to wolves and were distinctly unhappy to be living alongside them. On the Trail of Wolves is her spell-binding account of her adventures with wild wolves, track-ing them through the Yellowstone National Park, learning their ways and trying to understand what makes these creatures so special.

After listening to the prejudices of her new neighbours, Forrester decided to get to the bottom of why wolves create such a polarity of opinion. She ventured far and wide to talk to rangers and conservationists, hunters and ranchers, all the while assembling a bigger picture of what makes these predators tick and how humans can peacefully co-exist with them.

It’s now more than a decade since wolves were reintroduced to Yellowstone, and while this event seemed to the wildlife lobby to be a cause for celebration, there remains a threat lurking in the shadows from a human population that increasingly resents their presence. In a story of the animal kingdom in conflict with humans, Forrester tells her tale with fire and passion. 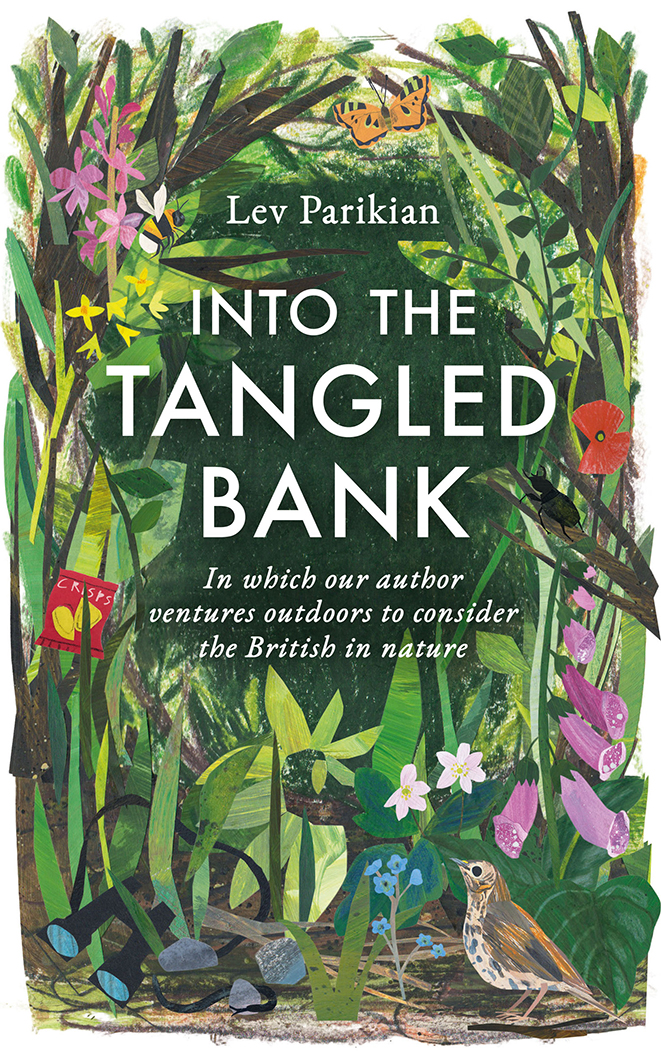 It was the legendary English naturalist Charles Darwin who mentioned contemplating the ‘tangled bank’ in his scientifically ground-breaking book On the Origin of Species. And while others might have been tempted to skip this bit and crack onto the important stuff about evolution, Lev Parikian dwells on Darwin’s description of “birds singing on the bushes.” So much so that his latest book – Into the Tangled Bank – borrows its title from Darwin. Not only that, the tangled bank itself becomes a destination for exploring Britain.

Parikian, who in real life conducts a classical orchestra, is enthralled not only by nature, but by the way the British approach it. It’s often said that the British are a nation of nature lovers, but what does that really mean, he asks. For some it’s watching racer snakes chasing iguanas on TV mesmerised by the honeyed tones of David Attenborough’s narration. For others, it’s a quick trip to the zoo to have a look at some monkeys. Or it could be a stiff hike up a tall mountain to try to get a glimpse of a rare bird on the wing. And while it could be any of these, for our author it all starts with the pavement outside his London house from which he gradu-ally roams as far as the Isle of Skye, recording in fabulous detail his encounters with other, equally mildly eccentric nature lovers as he ventures into the tangled bank. Great stuff. 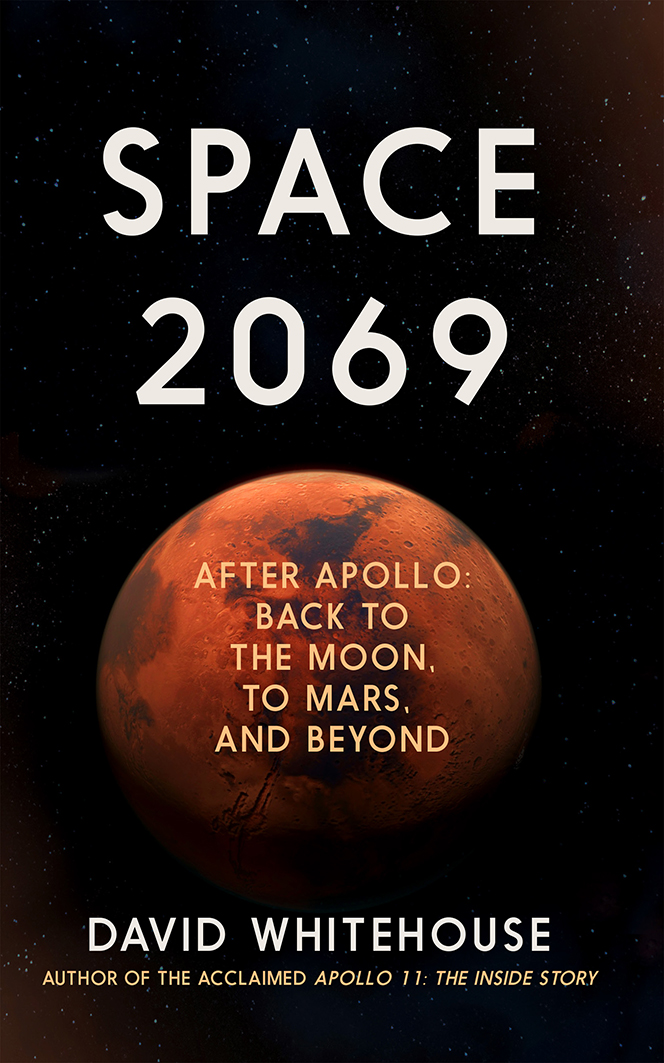 Last year saw the fiftieth anniversary of Apollo 11 that made Neil Armstrong and Buzz Aldrin the first humans to ever set foot on a planetary body other than our own. Revisiting this milestone was author David Whitehouse, whose quite brilliant Apollo 11: The Inside Story would have made anyone with even so much as a passing interest in space exploration wonder why, after all these years, we have simply lost interest in going there. In his follow-up, Space 2069: The Moon, Mars and Beyond, Whitehouse sets about not so much answering that question, but considering what the next person to set foot on the moon will be doing there. Most probably we would be “establishing a base on the lip of a crater at the lunar south pole.”

This is where we know there’s ice, meaning that there’s potential for sustaining a colony of lunar humans. The purpose of the base, of course, would be to act as a jumping off point for further explorations, first port of call Mars, where we also know there’s ice. From Mars we can propel ourselves further and deeper into the known universe. But the obstacles are many, says Whitehouse, not the least significant being the astronauts’ ability to physically withstand the demands of alien environments. And then there’s the thorny issue of money. Assuming we could get to Mars in the next fifty years (as the book’s title optimistically suggests), what sort of world awaits us there? 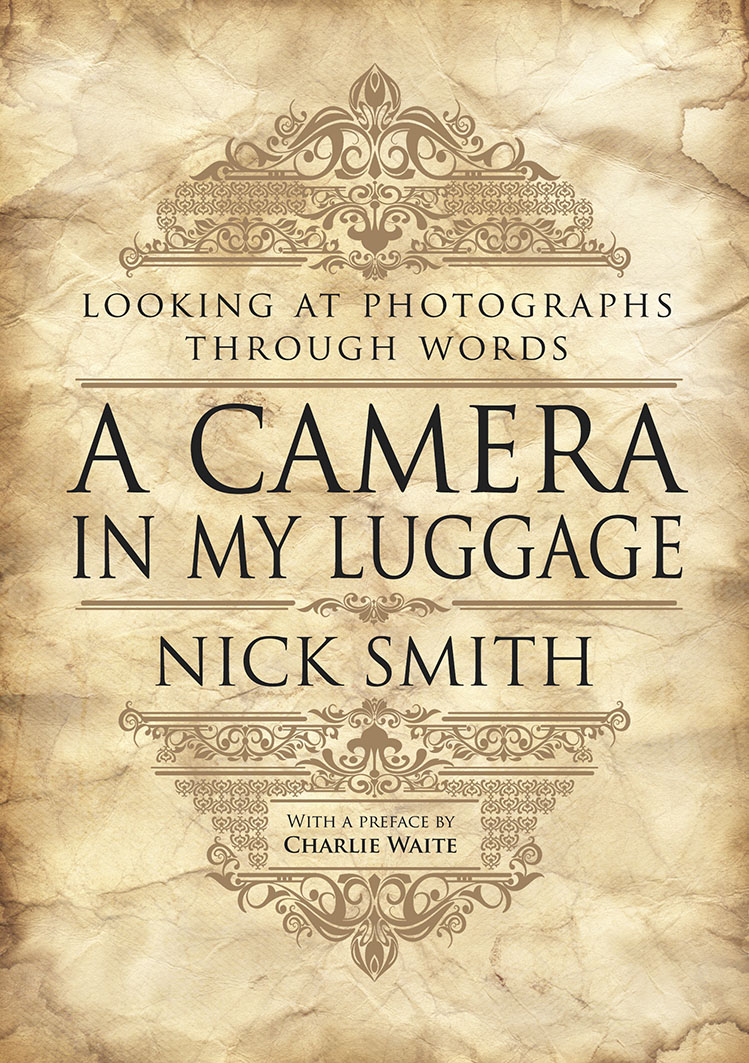 Regular Bay contributor Nick Smith has been a busy chap during the lockdown. Last month we published an article on his new book of smartphone photography – To the Lighthouse – and this month we’re reviewing his latest book of words, A Camera in My Luggage. Those of you that know Nick’s adventure features in this very publication will also know that over the years he’s been to the ends of the earth as a professional travel photographer on assignment for national magazines and newspapers, and that the stories behind the images are often as intriguing as the photos themselves. You are always left wondering how you can read more.

Well, help is at hand in the form of A Camera in My Luggage that collects fifty anecdotes based on Nick’s travels from China to Sri Lanka, the Galápagos Islands to Namibia, from Antarctica to the Heart of Wales railway that starts on our doorstep here in Swansea. And good fun it is too, with the author spinning plenty of shaggy dog yarns while pretending to write seriously about the life of the professional photographer on the road. In his preface to the book, legendary British landscape photographer Charlie Waite claims that “there is something of a top comedian often emerging from within these pages”. And while that might be pushing it a bit far, there no doubt are some extremely extraordinary events recorded, most notably the explorers who, in the High Arctic, lit a bonfire inside their airborne helicopter in an attempt to stay warm. An easy-going and highly entertaining read for anyone interested in either global travel or the art of photography, but preferably both at the same time. Oh, and the sumptuous cover is by Bay’s art guru Simon Williams.