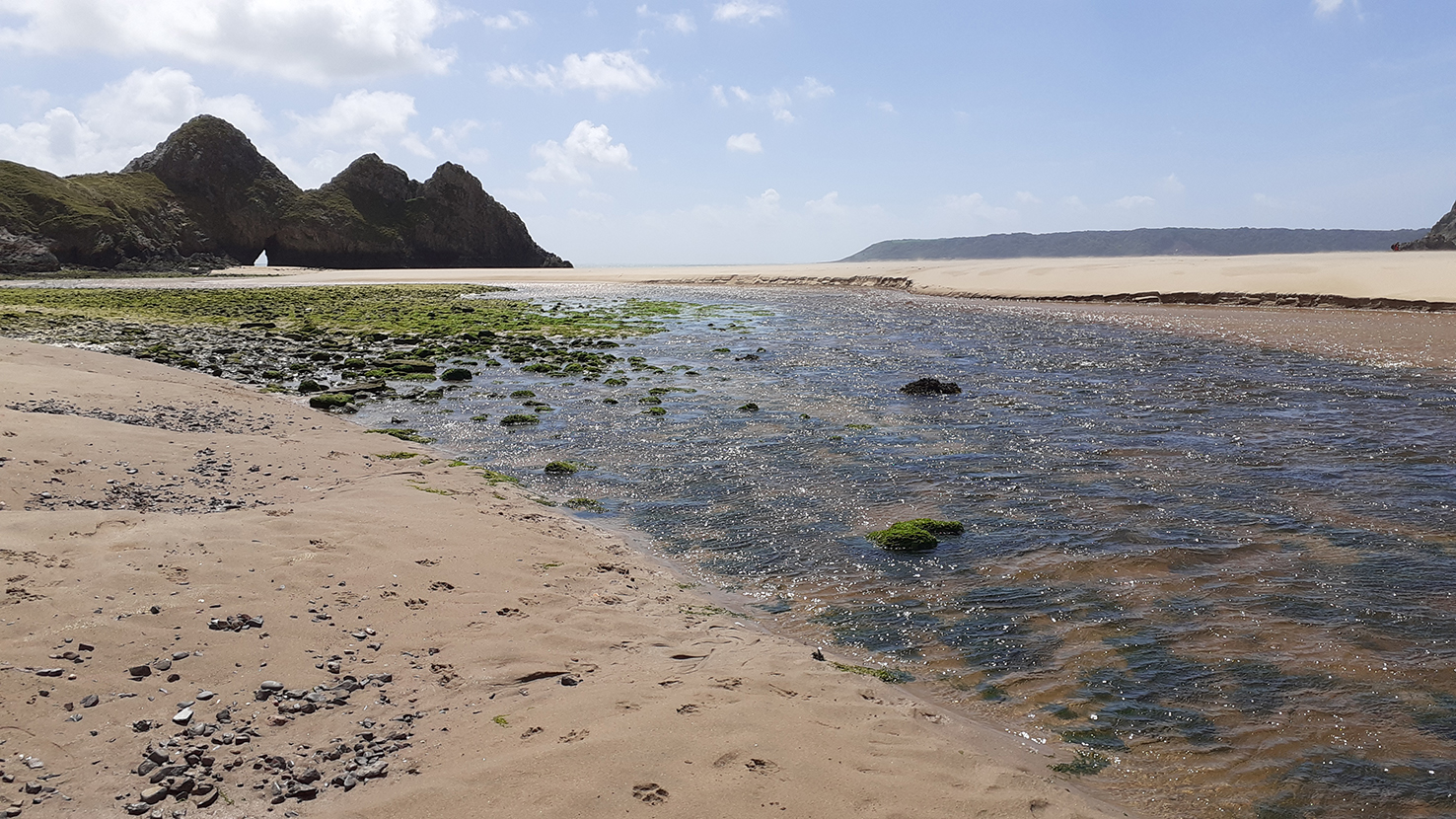 This month Ian Bateman takes us on a route that will be familiar to many. It is a hilly walk but with some spectacular views as a reward for your efforts. There are a couple of places to get refreshments en-route but it’s always advisable to pack a picnic, just in case. 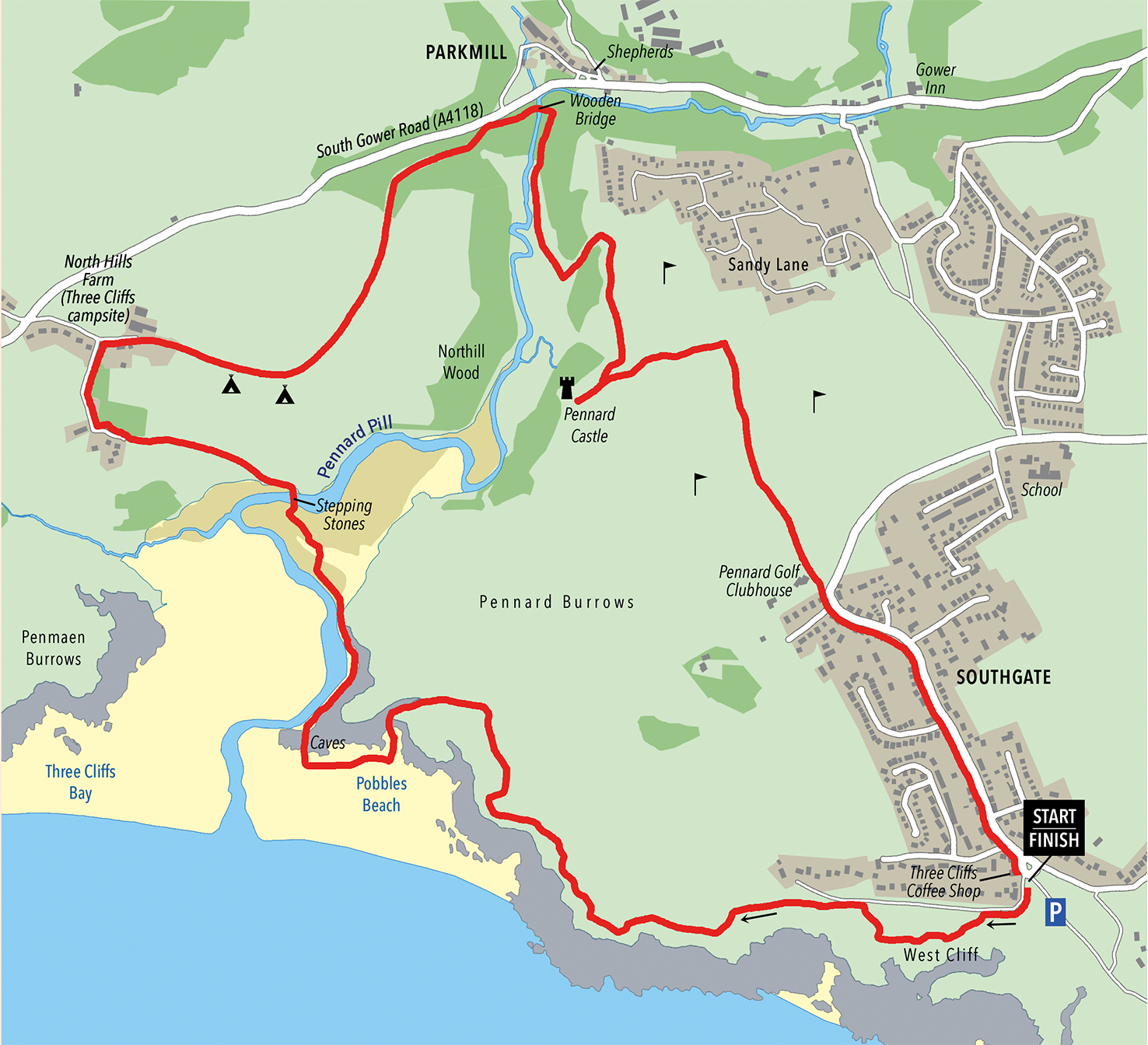 I thought I’d continue with a local theme this month, even though the 5 mile rule at the time of writing has been relaxed. Mainly because it occurred to me that we haven’t got down and dirty with Three Cliffs Bay yet, despite flirting with it on a couple of occasions. So, a walk around the area was long overdue. Of course, being so familiar to us all it’s easy to forget that it’s one of the most rewarding walks in the whole of the UK in terms of unadulterated beauty and wonder. The sheer variety of views on show is quite astonishing. You may also recall that a number of years ago there was a TV programme seeking to find the UK’s favourite view. Each location was championed by a celebrity and Neath’s very own Katherine Jenkins advocated Three Cliffs. If my memory serves me correctly and after a public vote, it finished second to Wastwater in the Lake District which was the favourite of Sally Webster from Coronation Street. Not that I was bitter about the defeat, but I can only imagine that more people watched the Street than bought Katherine Jenkins’ CDs.

If I ever needed reminding how stunning this place is, by way of comparison, just after lockdown was lifted I spent a day walking in the much heralded Chilterns which itself is a designated Area of Outstanding Natural Beauty. The walk took in the village of Turville (above left), which doubles as the fictional village of Dibley in the TV series and is overlooked from a nearby ridge by the Cobstone Windmill (above right), which features in the film Chitty Chitty Bang Bang. And whilst the villages were undoubtedly beautiful in a very English chocolate-box sort of way and the countryside enchanting, it didn’t quite have the ‘wow ‘ factor that much of Gower possesses and in particular this bay. Although to be fair, I could be accused of not comparing apples with apples, but still. But what’s for certain is, if anything deserves the moniker of Truly Scrumptious, then it’s Three Cliffs. 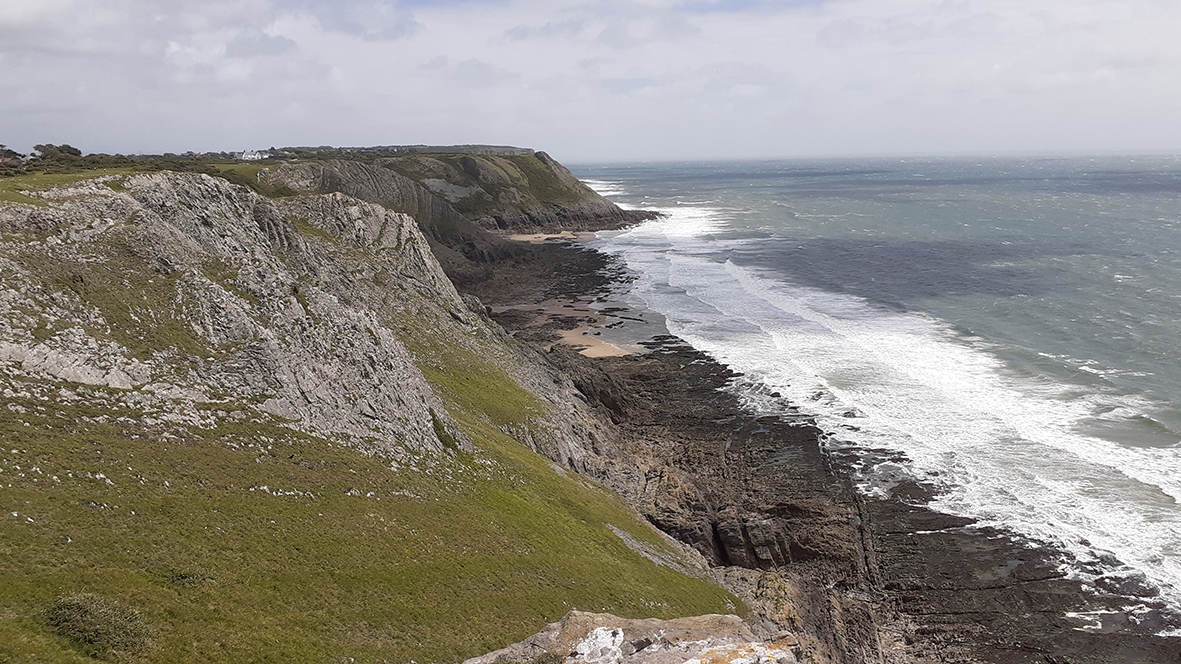 Directions for this walk are relatively simple and easy to follow and I’d imagine many of you will already be familiar in any case. Starting from the car park at Southgate, follow the coast path heading west and past the Heatherslade Residential Home. This used to be the boyhood family home of the Welsh poet and Kardomah boy, Vernon Watkins and where his mate Dylan Thomas often visited. There’s a road you can follow but the more rewarding route would be along the cliff line which affords the better views, but obviously where care is needed. A mistake I often make 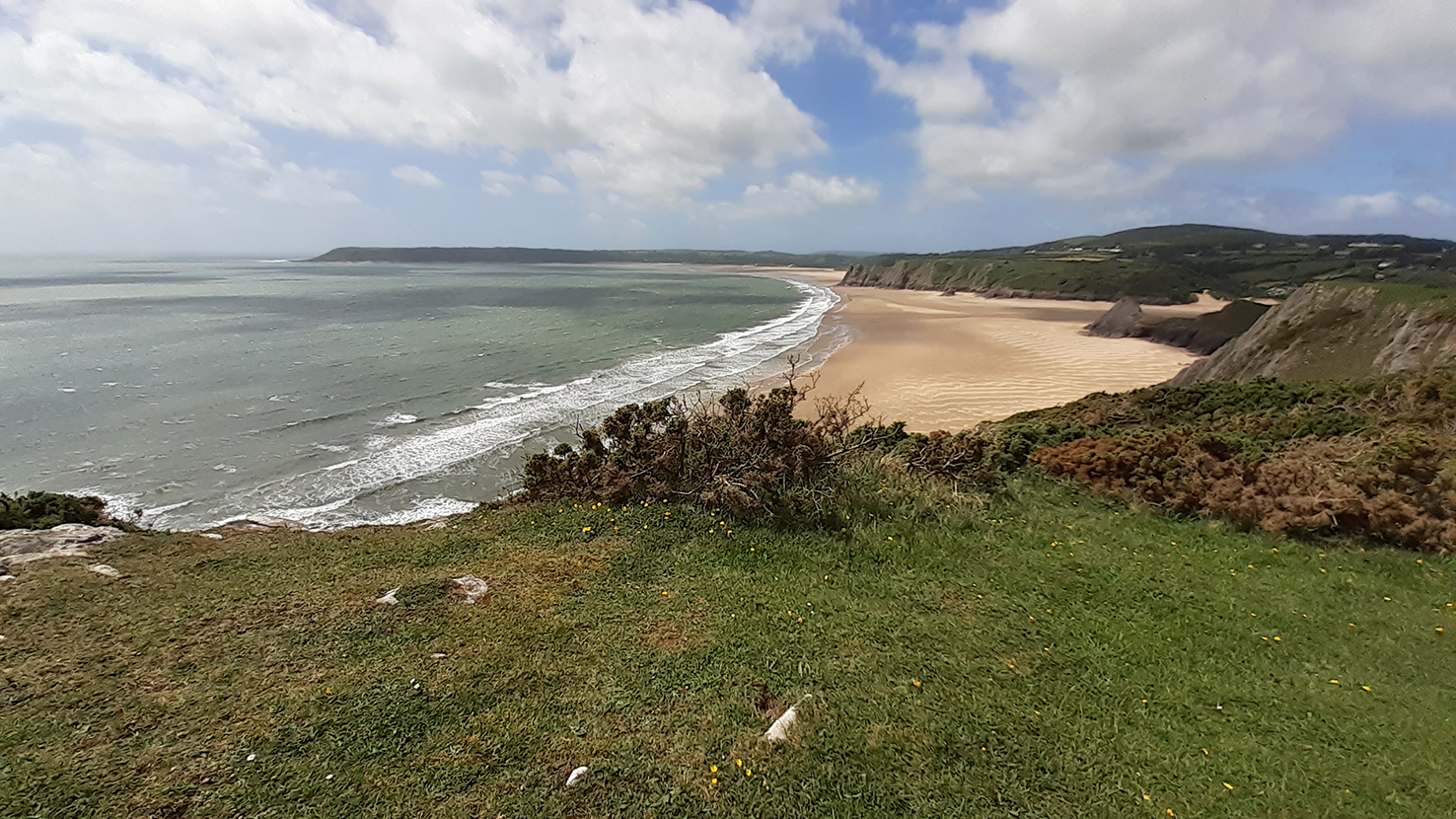 when out walking is to take in the view either straight ahead or side to side forgetting to glance behind, so it’s worth doing it here as it gives you a great view of the rock strata of the cliffs around Pwll Du Head (pic above). After 10 minutes or so, the magnificent arc of Oxwich Bay comes into sight smacking you right between the eyes. This is serious loveliness. Below is Three Cliffs Bay itself (pic right) which at this point, because of the angle of approach, hides the full extent of its beauty. Then stretching out beyond Great Tor which protrudes in 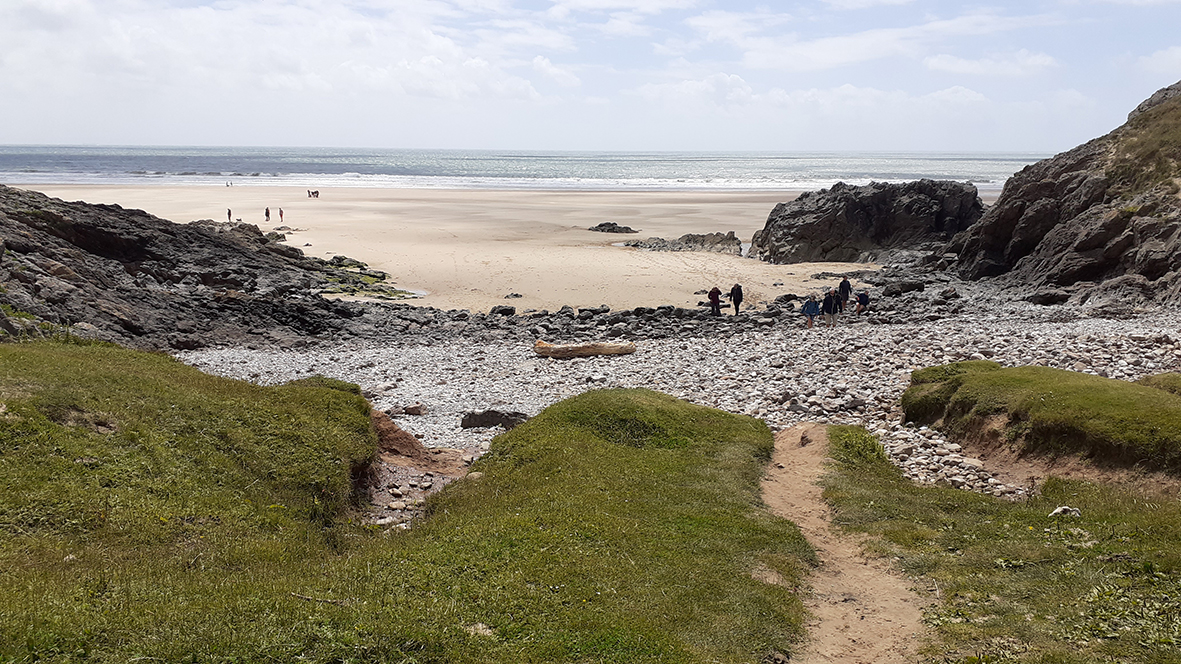 to the bay in the middle distance, Nicholaston Burrows and Oxwich sweep majestically beyond. I suggest you pause awhile here and drink in its splendour. In fact, it may be advisable to sit, as you might get all weak at the knees.

It’s best if you attempt this walk at low tide because that’s when you can get up close to the cliffs themselves. If it’s high tide your route around the cliffs will be blocked. Descend into the ravine which leads you onto Pobbles (above) beach to the left but if the tide is in then you’ll have to scale the dunes in front of you to access the valley beyond. 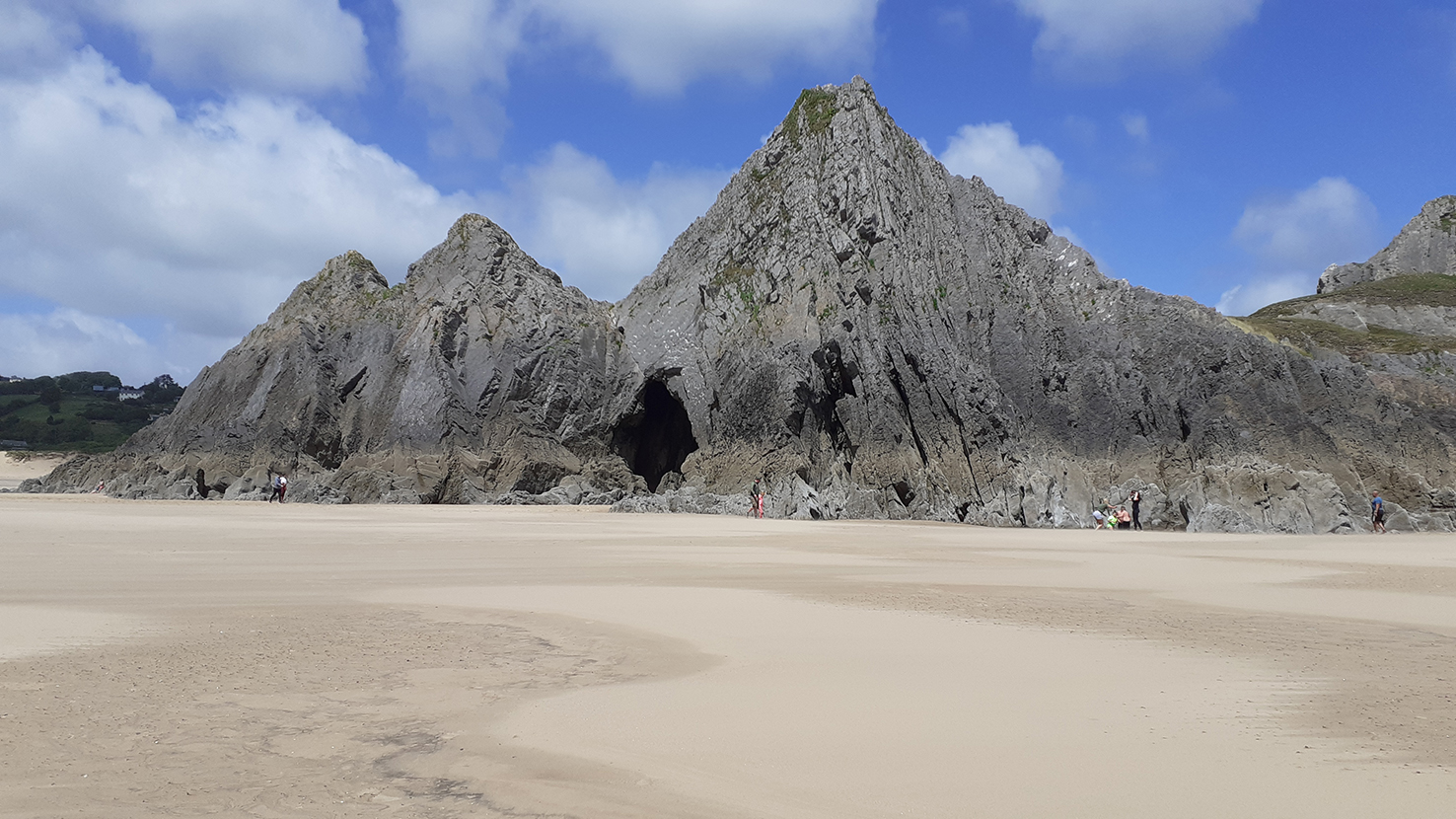 Onto Pobbles beach and around the corner to the right to get a close up view of the main attraction (right). Shaped by coastal erosion, wi 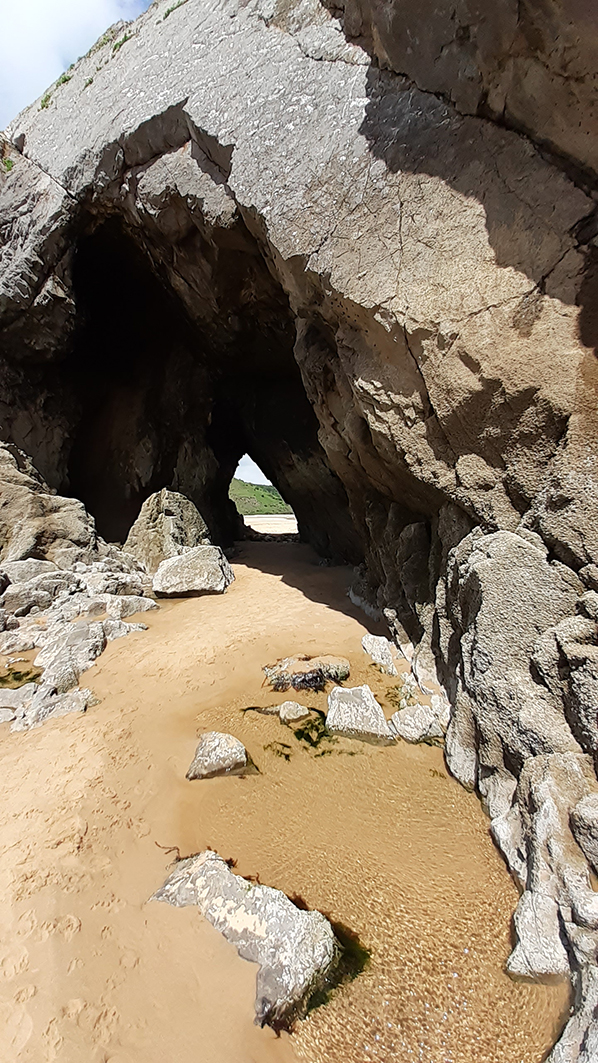 th an archway through which you can walk (left). These limestone cliffs appearing like three sharp teeth sticking out of the golden sands is an iconic and much photographed Gower landmark. 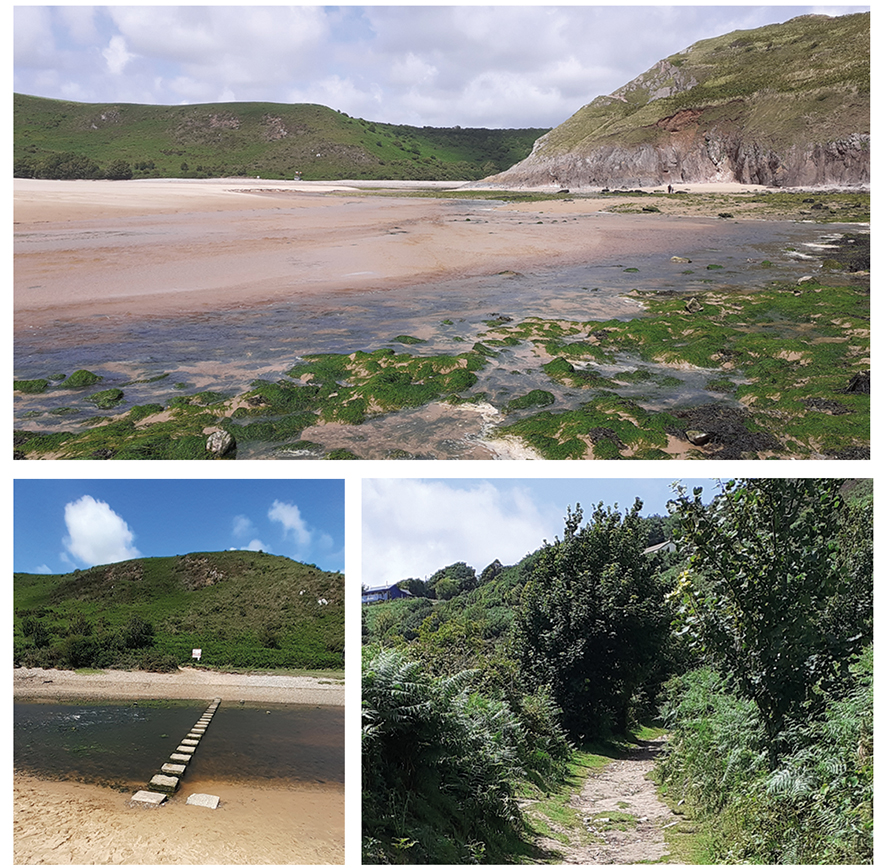 Keeping the stream to your left, you’re heading for the lifeguard hut over the opposite side of the valley (pic top right), although it will mean you’ll have to scramble over some rocks to do so – they can be slippery and difficult to negotiate if agility is your problem. You’re better off therefore, taking off your shoes and socks and paddling across the stream (if it’s safe to do so) and head for the dunes across the bay and then bear right towards the hut.

Cross the river via the stepping stones (pic right) and take the path (far right) which ascends the cliff just to the left of the hut. As you climb, the view over the bay is the one that we’re all familiar with (below). Up to the 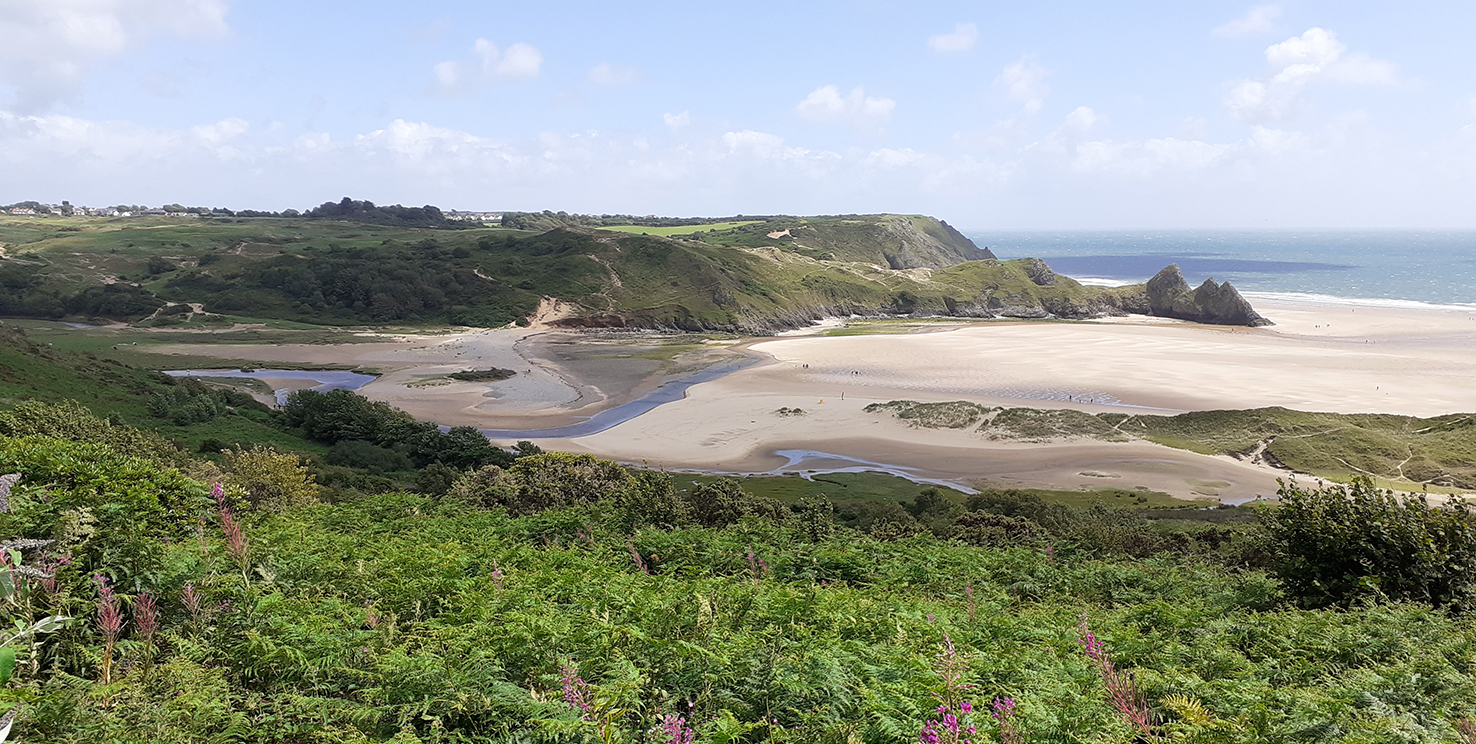 top where you join a tarmac road and head to the junction as it levels out and take a right towards Three Cliffs Bay campsite. You have to take a little detour here to the left as only vehicles are allowed down the road as it narrows but you rejoin it 100 yards or so along. You can take another detour here too, by taking in the view of the

bay from the award-winning camp-site itself. Back on the route then, straight ahead and through the gate following the path (above left) which eventually descends into the valley via a canopy of trees accompanied by that unmistakable smell of summer, wild garlic. You’ll also have the unmistakable sound of traffic on the south Gower Road which will be thundering along to your left (above centre).

Once you reach the valley floor follow the path to the left which after a few hundred yards takes you over a wooden bridge (above right) and then turn immediately right. You’ll emerge from the tree covering and to a view that is also 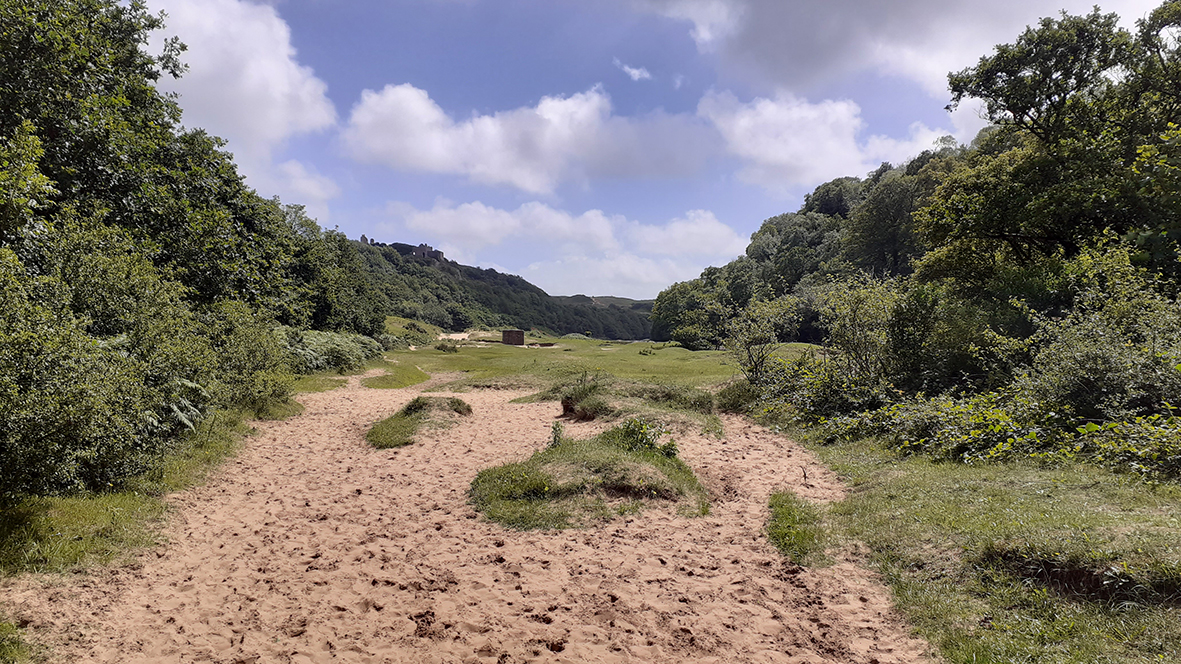 very pleasing on the eye (right): the lush and beautiful valley of Ilston Cwm with Ilston Pil running lazily along, flanked by the steep green wooded valley sides and sitting dramatically on the edge of the eastern slope, the ruins of Pennard Castle. I really wish Sally was here to see this.

Keep an eye out for a

sandy path (right) a few hundred yards before the castle which will be behind your left shoulder which takes you up to the golf course. It will be remiss of you not to go over to the castle (far right) itself as the view is pretty spectacular (below). The castle was thought to be built in the late early 13th/14th centuries but was abandoned not long after because of the encroachment of sand. Who’d have guessed? 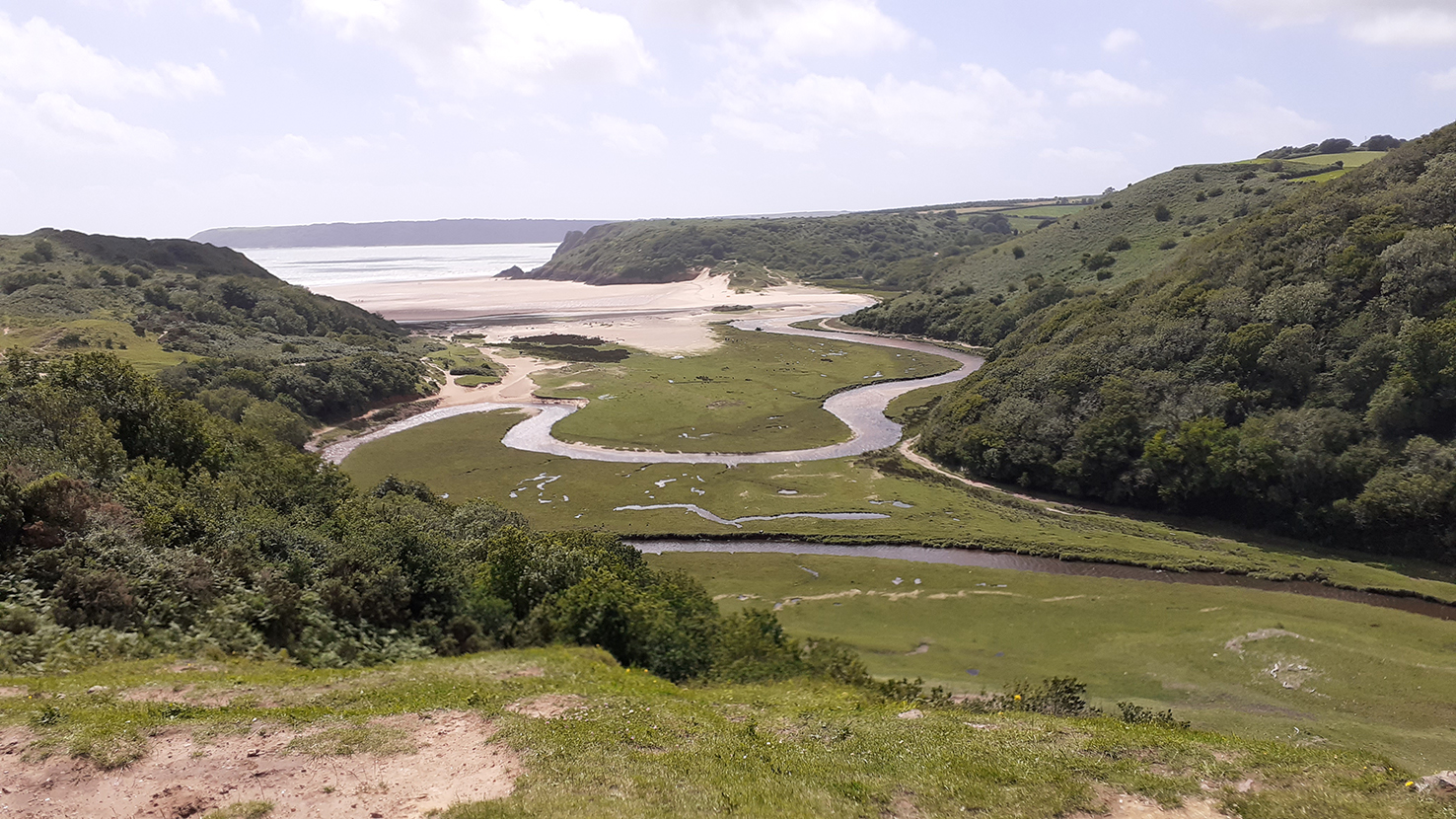 Retrace your steps and head for the rather incongruous site of the concrete water tower ahead. Then look out to your right, where white painted rocks will mark the path which directs you over the links and towards the clubhouse and then back to the start. It goes without saying that you need to be respectful and mindful of the golfers here, even if it’s for your own safety, because judging by a few wayward tee shots I witnessed, the lockdown hasn’t been kind to some.

Grade: Moderate (with some scrambling)