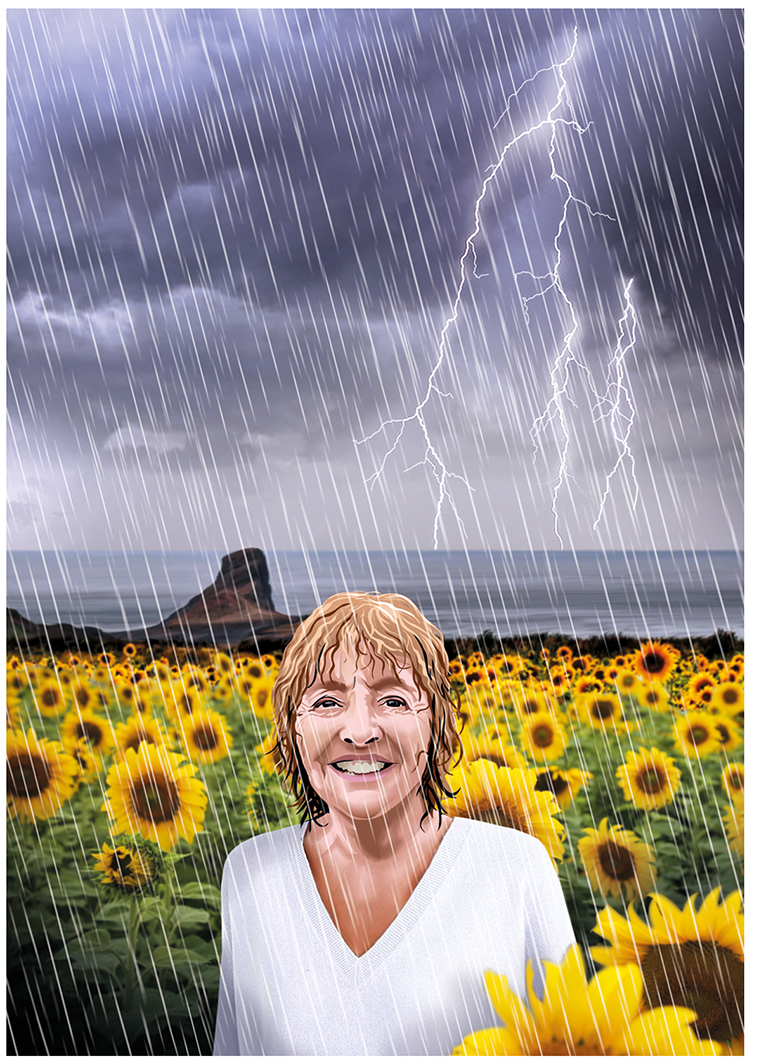 This month Liz Hinds gets unusually frustrated and angry – and rather wet.

It was a sunny morning, the weatherman said it wasn’t going to rain, and so, ‘Let’s go and see the sunflowers at Rhossili!’ I said.

That was my first mistake.

‘It’ll be quiet at this time of day on a Monday,’

I said just before we drove into a car park already fairly crowded.

‘At least it’s not raining,’ I said just as I felt the first drops. ‘It’s okay, it’s going the other way.’

It stopped. I looked around smugly. My inbuilt optimism was being rewarded.

We walked down to the Vile and were in the midst of the flowers when we saw the first lightning over the Worm. ‘It’s okay,’ I said. ‘It’ll pass.’ But walking with a stoop to ensure I wasn’t the tallest thing in sight seemed a wise precaution.

Then the rain started in earnest.

‘Atmospheric isn’t it?’ another visitor shouted across at me.

A smile quickly followed by a scream as lightning flashed and thunder cracked immediately over our heads. ‘Shall we turn back?’ I squeaked.

It’s surprising how far a short walk can feel when it’s pouring with rain and you’re in summer clothes. I had to drive home in my knickers. That’ll teach me to listen to weathermen.

The weather, politicians, life in general, all have a habit of letting us down.

I didn’t know until recently that, after the end of World War 2, Nazi scientists who’d done the most hideous experiments on Jewish people, were much sought after by various governments – including the British – not to be punished but to be employed. Our government chose to use the knowledge these evil men acquired for their own purposes and, no doubt, they came up with good arguments to support their action. There is always evidence as long you don’t think too much.

I recently read a book set in the ancient Persian Empire. The king was a pathetic sort of creature who spent most of his time partying and relied heavily on his advisers and on one adviser in particular who was the king’s puppet-master.

This adviser proposed that, for the good of the empire, there should be a period of ethnic cleansing.

The king agreed, and it was only the courage of one woman that prevented a whole nation being exterminated. She stood up against the adviser and used her feminine charms to turn the king to her point of view. Yes, there are several dubious aspects to this story, but they are still more honest and less pernicious than the practices carried out by some in today’s nepotistic society.

This is all getting very dark and political and not what you expect from Hinds’ Sight. But like many people I get frustrated and angry and saddened when I listen to the news. I feel help-less, so I sup-pose what I’m trying to say is that what is happen-ing is not new.

2020 certainly hasn’t lived up to expect-ations. For many, the hopes and dreams with which they began the year have been painfully quashed. Weddings have been postponed, businesses have ceased trading with a huge resultant job loss, and people who shouldn’t have, have died.

It’s hard under these conditions to take com-fort in these words that Paul wrote to the church in Rome: ‘And we know that in all things God works for the good of those that love him …’ because it doesn’t feel like it. It doesn’t feel like it when you’ve lost your job and you’re wondering how you’re going to feed your family.

It doesn’t feel like it when your husband, who’s always worked hard to help sick people, becomes sick himself and dies.*

The trouble with bible sound bites that may be trotted out on such occasions is that the full context isn’t explained. If you read further on in the same chapter of Paul’s letter you’ll find that he stresses that nothing, absolutely nothing, that we do or go through, can separate us from God’s love. He is in it with us and helping us in our weakness.

We learn from history that there are ups and downs, but life goes on. We also learn that sometimes all it takes is just one brave person to stand up to evil.

The courageous woman in the story is called Esther. She was willing to risk it all to save her people. Today I’d suggest that we have lots of Esthers – men and women who carry their children onto dinghies, risking all their lives – for a chance of life. Nurses who work ridiculously long shifts in Covid wards because others need help.

Everyday Esthers who make a difference to someone’s life, and these are the people who give us hope for the future.

*And it doesn’t feel like it when you’re wet through to your underwear in the middle of a field.