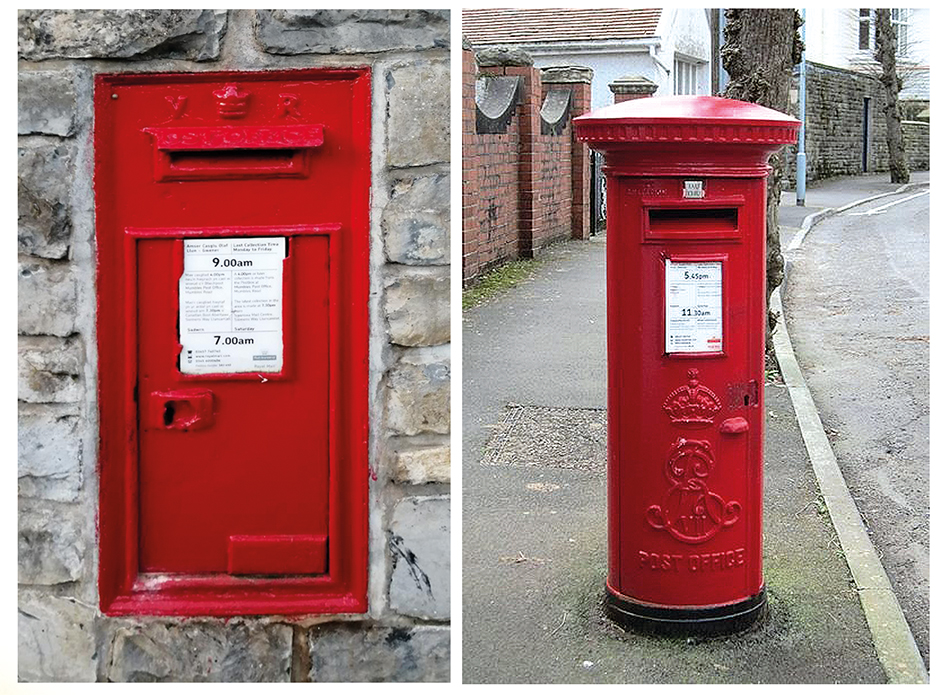 There are on average 72,300 post-boxes situated around the country today, with 2,722 in Wales and 208 post-boxes in Swansea. The red post-box is regarded today as a British cultural icon but where did it first begin?

The origin of the post-box dates back to 1852, and it was on the recommendation of novelist Anthony Trollope (below), that it was approved. Pillar boxes had been used in a trial run on the island of Jersey, in St Helier, and in 1854, they were first introduced 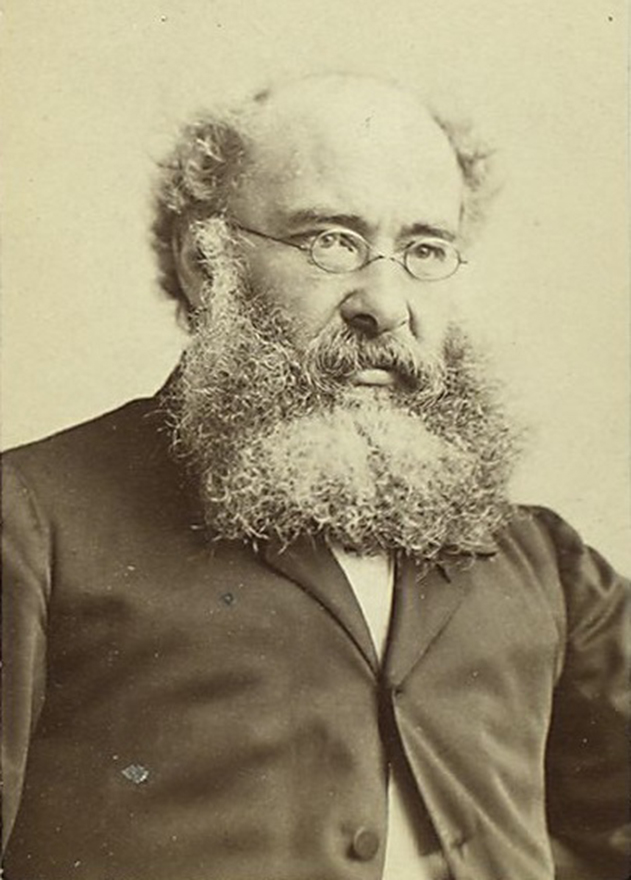 The front of a post-box bears the royal cypher, beginning with Queen Victoria right up to Queen Elizabeth II.  Pillar boxes gave the freedom to people to post letters without having to make a trip to a Post Office.

The Royal Mail can be traced back to 1516 when Henry VIII created the Master of the Posts, renamed Postmaster General in 1710. The original mail service was created only for the King and his court, and it wasn’t until 1635 the Charles 1 opened it up to the general public.

In 1660 The Post Office Act created the publicly owned postal service. At this time the Postmaster General was Henry Bishop and in 1661 when the first postmark was used it was called a Bishop mark. 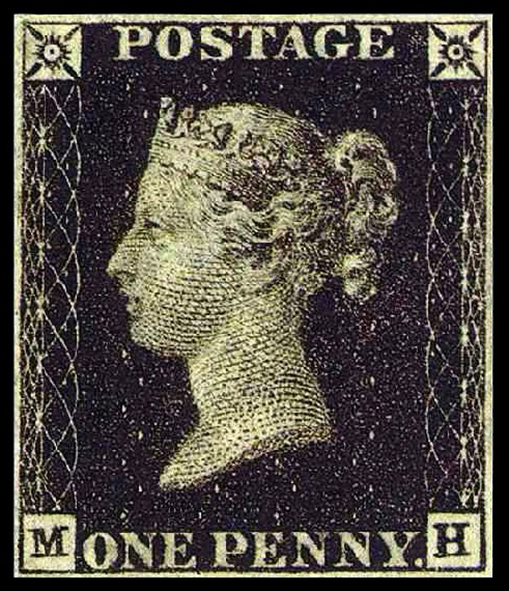 The first postage stamp was introduced in 1840 – the Penny Black (right). Up until 1839 it was the recipient of the letter that paid the postage. In 1837 Rowland Hill, an English teacher, inventor and social reformer published a pamphlet entitled “Post Office Reform its Importance and Practicability”. Hill wanted to make the cost of sending a letter affordable to everyone and proposed an adhesive stamp to indicate pre-payment. He called for “low and uniform rates” and said the cost of postage could be dramatically reduced if the postage had been prepaid by the sender. The Penny Black was first issued on 6 May 1840. 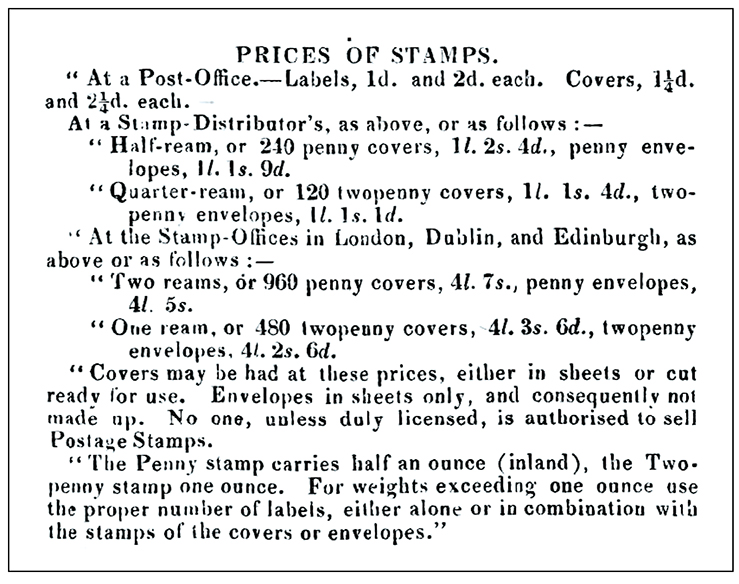 The Cambrian – published on the 2nd May – printed the price of stamps (right). Today the price isn’t put on the stamps – they simply say 1st or 2nd Class so the price can go up and there is no need to reprint the stamps. 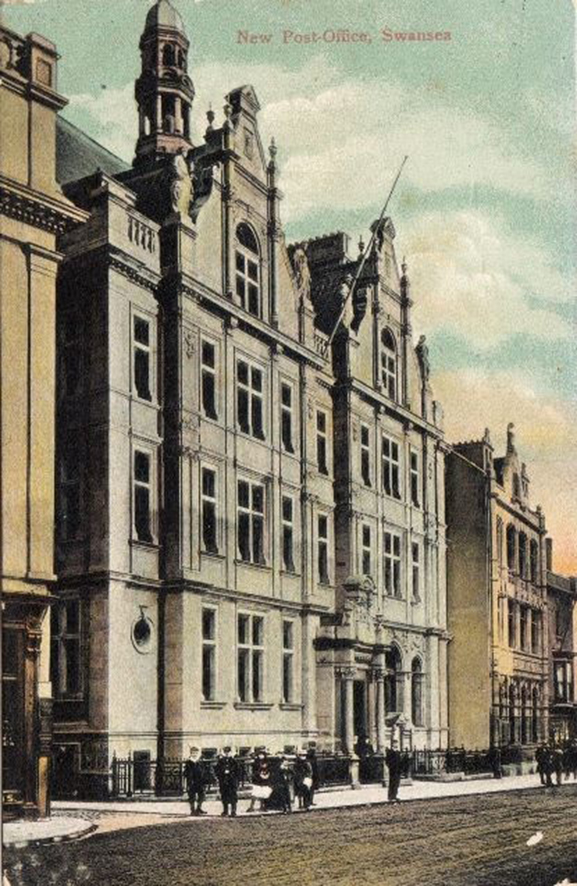 In 1896 the Postmaster General at the time, Henry Howard, went against the wishes of the public and purchased The Mackworth Hotel in Wind Street. In its heyday, The Mackworth Hotel, was a coaching inn, and it was here in 1816, that Fanny Imlay, “committed suicide”. (I covered this in my article in Bay Winter 2016) The Post Office replaced the hotel at a cost of £47,000. The new Post Office (right), 10 Wind Street, was opened in 1901.

Some moving letters were to be published in the local newspapers such as, The Cambria Daily Leader and South Wales Weekly Post. 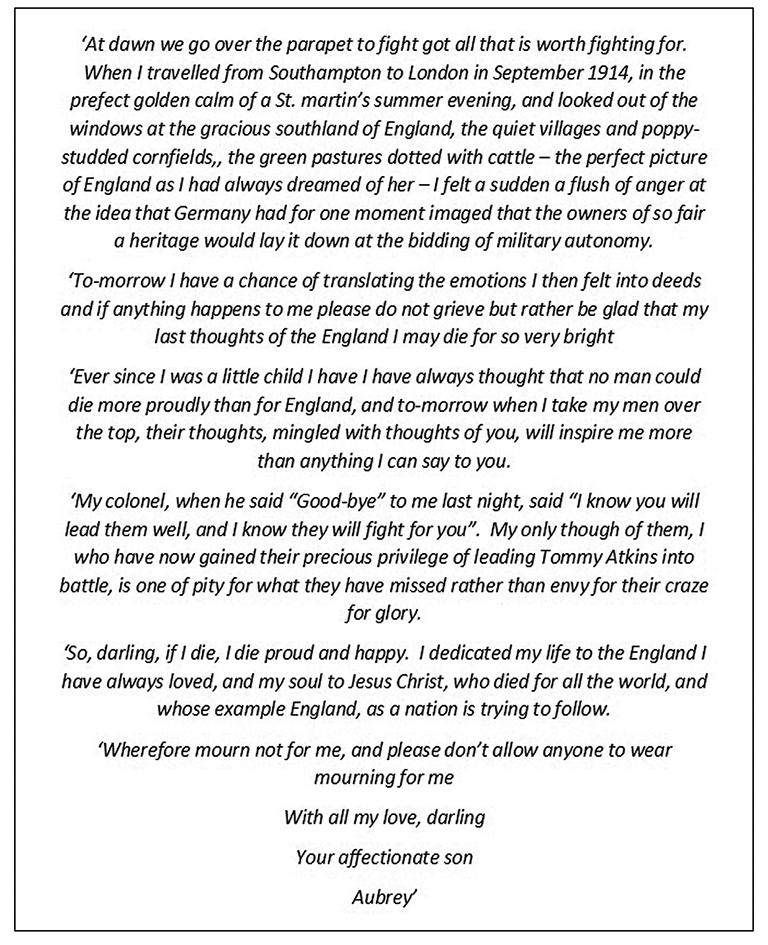 One example (right) was published on the 11th August 1917, written by Captain D.A. Sandbrook, (above) who was killed in action on 31st July 1917. During the inter-war years and then during its hey-day in the 1930s, right up until the 1970s it was common to see Telegram Messenger Boys (right). Black-edged telegrams were sent to families informing them of the death of service man or woman.

Again, during the Second World War, the power of the written word, proved important to serving soldiers and people back home. It was during this period that postal acronyms were being used. These also included R.A.D.I.O, (Romance and delight I offer) H.O.L.L.A.N.D, (Hope our love lasts and never dies) I.T.A.L.Y (I trust and love you) and F.R.A.N.C.E. (Friendship remains and never can end) and some that are too racy to be published here!

To conclude, letters can provide an insight, however raw, into the lives of our forefathers, during turbulent periods of time. 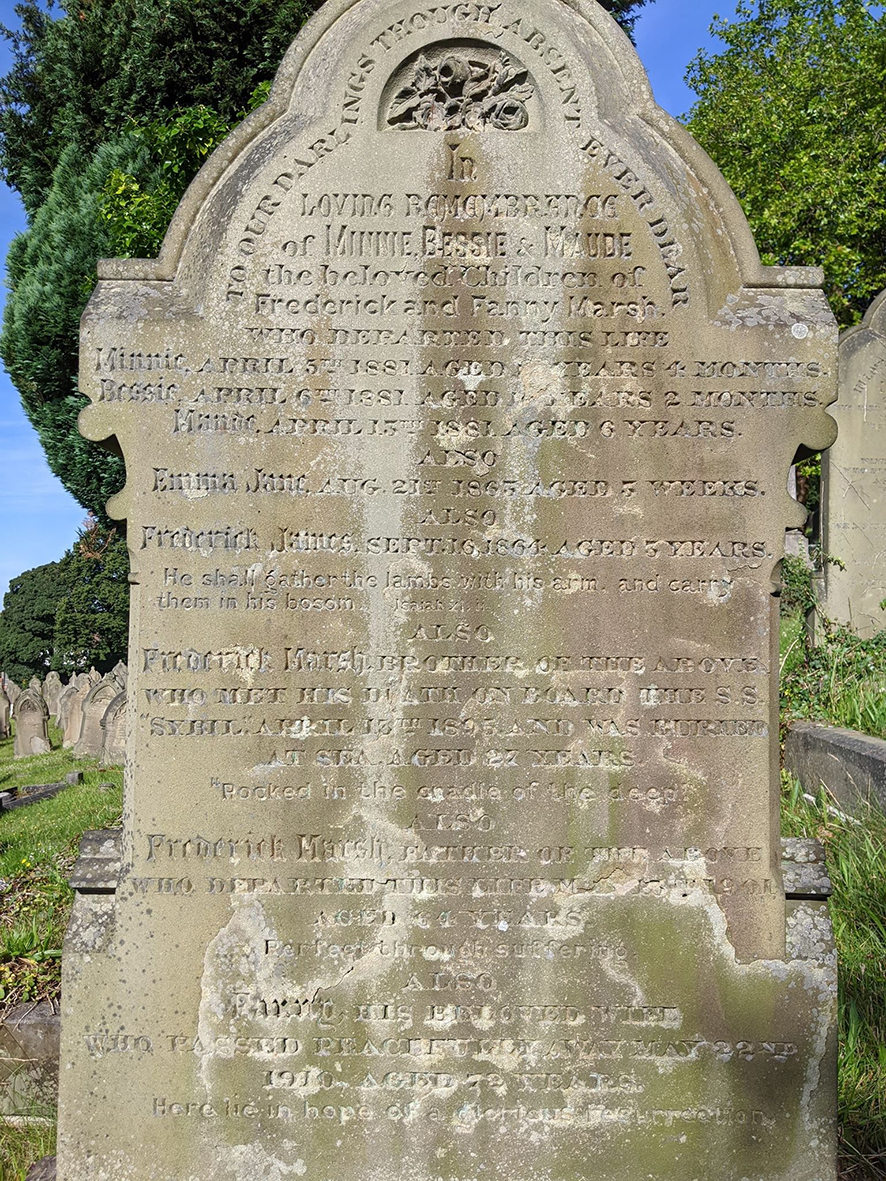 I was recently sent a photograph (right) of a headstone in Danygraig Cemetery, by Mr P. May. The name in question that he wanted to know was Frederick Marsh, who served and met his death on board the S.S. “Sybil”.

Was Frederick buried there?

Frederick Marsh is only commemorated on the headstone. 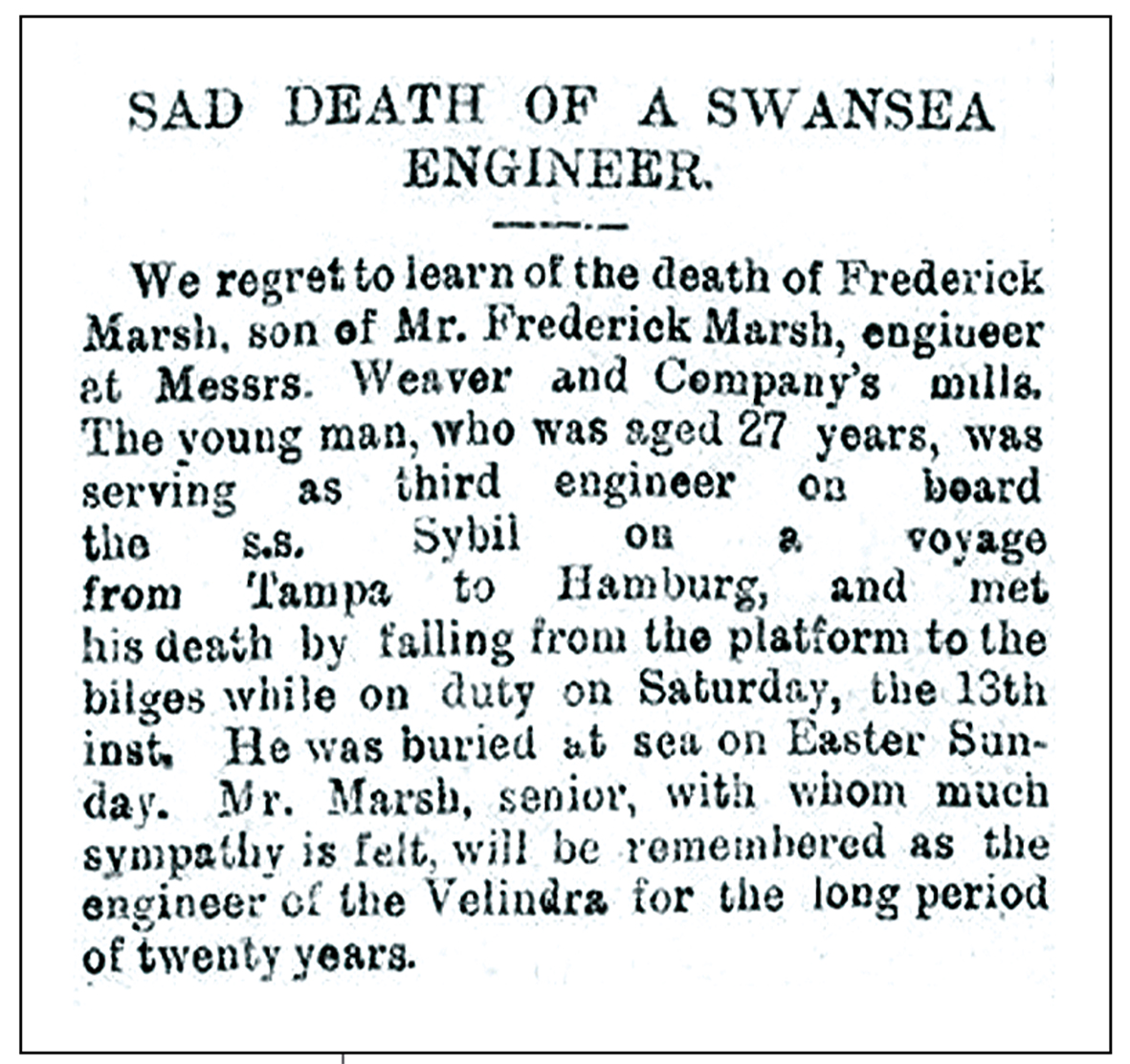 The Merchant Shipping Act, 1854, required that all sea captains recorded any British births, marriages and deaths that occur-red at sea. This infor-mation was then sent to the Registrar General Shipping and Seamen.  All certificates can be obtained from the General Register Office.

What other information is there on Frederick?

A newspaper article, published in The South Wales Daily Post (above), 23rd April 1895, and relates to the cause of his death and who his father was.

With further research, the location of the S.S. Sybil was found at latitude 48 degrees/longitude 4 degrees, which can be seen in the map right. Frederick Marsh was buried at this location on Easter Sunday 1895.