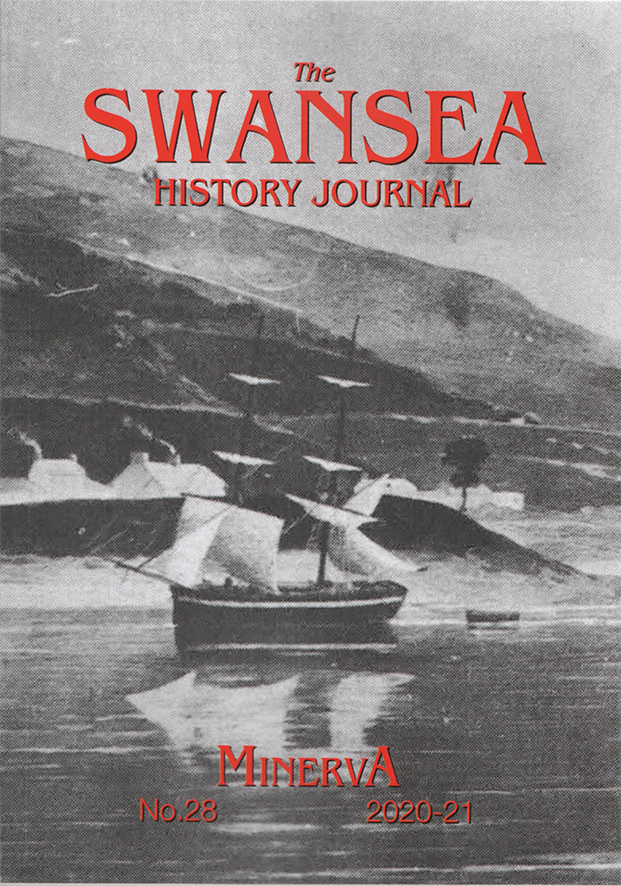 The Swansea History Journal or Minerva has been published by the Royal Institution of South Wales, annually, since 1993. It is a collection of articles and stories all relating to the history of Swansea.

You may have heard that a Swansea man, Lewis Roteley, whose father ran the Mackworth in Wind Street, was at the battle of Trafalgar. John Law gives us a full account, explaining just how close Roteley was to Nelson when he was mortally wounded.

In contrast, Katie Millien fixes on an ordinary, not untroubled, Swansea life, and explains, stage by stage, what sources are available to find out about him – he was William Boatwright (1879-1963).

There are two follow-ups from last year. John Wright takes his authoritative account of Swansea’s water supply into the 20th Century.

And John Andrew gives us a second chapter of baking in Mount Pleasant; he knows his Swansea street by street.

Richard Daugherty explores Swansea to Mumbles routeways and Roger Brown gives the first part of his picture of Swansea in 1902, using parish magazines as his source.

In 1807 Benjamin French began the pioneering passenger service on the then tramway to Mumbles – Martyn Griffiths has discovered more about him.

Two authors make use of phenomenally retentive memories. Bernard Humphreys takes you into the classrooms of the Grammar School on Mount Pleasant, and Grafton Maggs (joyously) into the rather turgid waters of the old Swansea Baths. In both cases we are in the 1930s.

Bill Bytheway has researched life on “the Island” between the North Dock and the New Cut.

Beau Jones writes on Hendrefoilan House near Killay, and its owner Lewis Llewelyn Dillwyn – it’s been in the news recently.

So how do you get a copy of the journal?

Many people buy their copy at the September History Day or the October Local History Bookfair at Swansea Museum. The RI has decided that it is prudent to cancel both this year.

You can buy it from Cover to Cover in Mumbles, Swansea Museum aims to re-open in September, and will have stocks.

Or order by post by sending a cheque for £10 made payable to RISW (each copy costs £8, plus £2 for postage & packing)