This month we look at why it’s not just weirdos who want to live underground, go behind the scenes of snowboarding’s Welsh connection, discover exciting ways to take the pain out of earning maths and chemistry, and head off for the outer reaches of the known Universe… 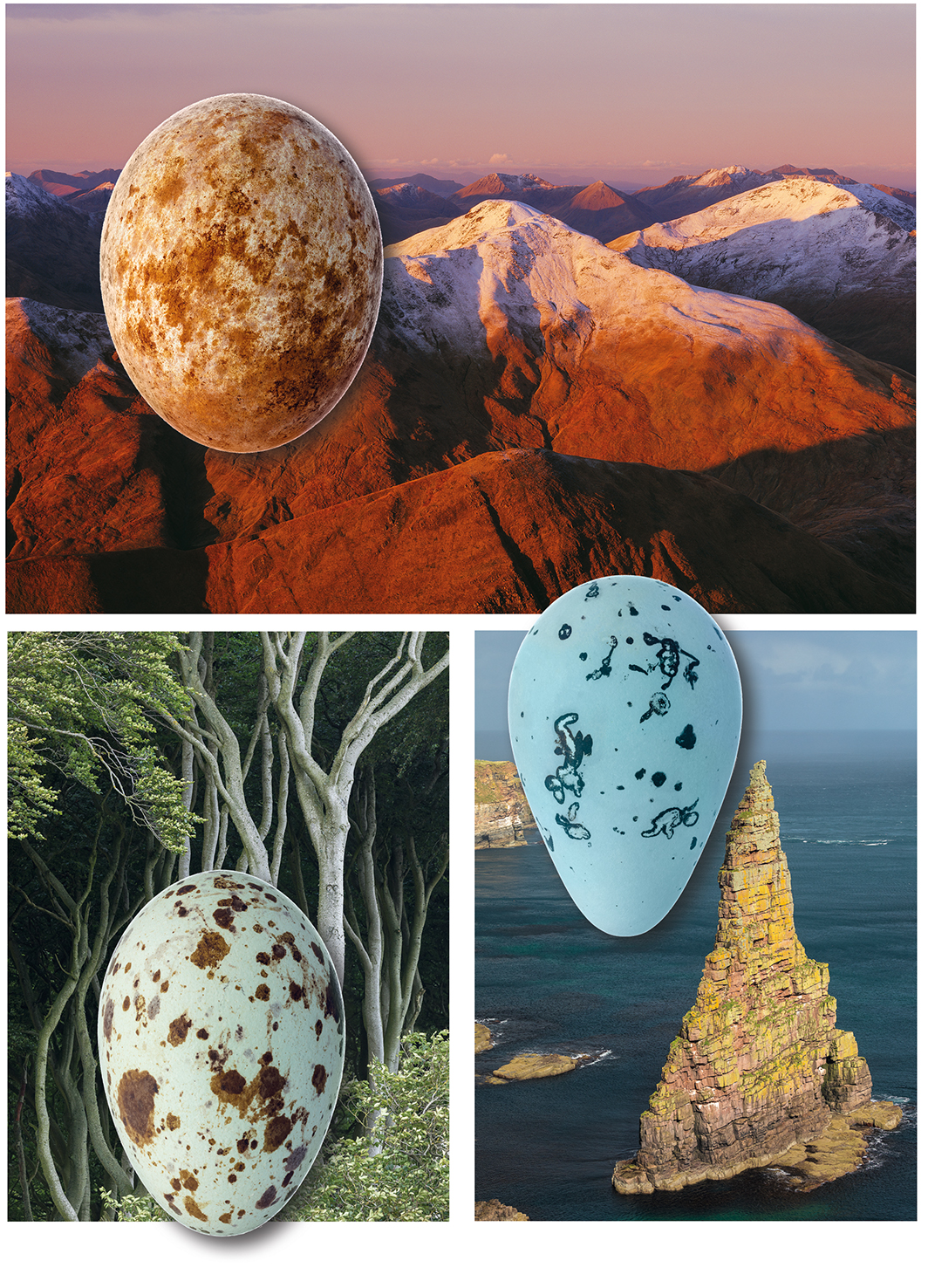 BAY Book of the Month 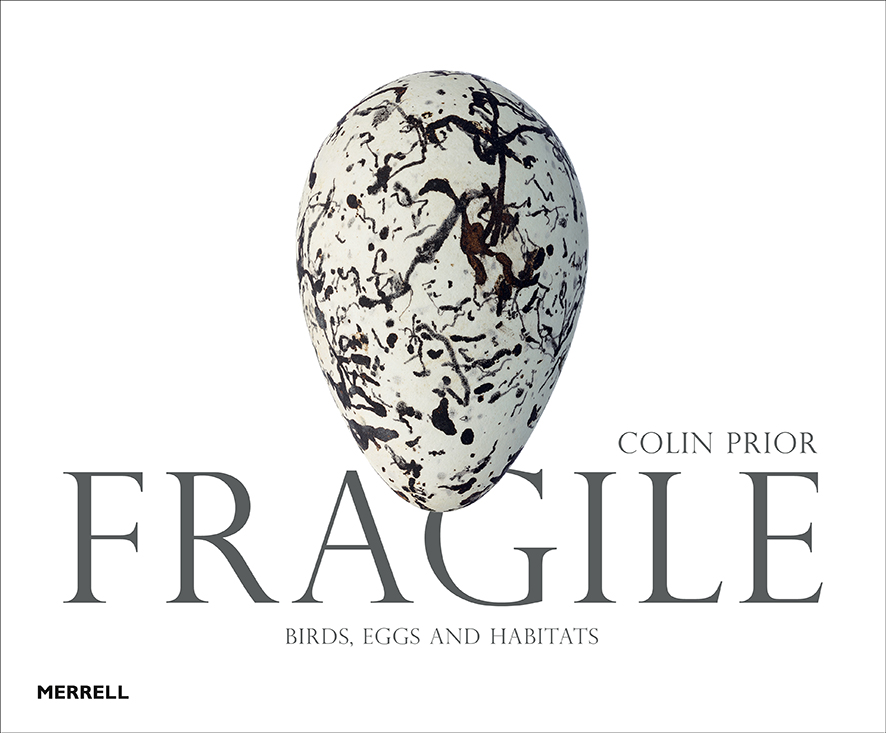 ‘Fragile: Birds, Eggs and Habitats’ by Colin Prior, published by Merrell, £40, hb

Birds’ eggs are one of the true wonders of the natural world. An external womb, arguably the largest single cell, so tough they can protect the developing embryo within and yet fragile enough that, when the time comes, the unborn hatchling can successfully fight its way out. Avian eggs come in an untold variety of colour, pattern, shape and size. And so, it is little wonder that they were once a collector’s obsession, a compulsion that has been handed onto the photographer, in the case of the extraordinary ‘Fragile’, legendary landscaper Colin Prior.

These days of course wild birds’ eggs are protected, and you can’t just go around the countryside photographing them. So Prior, who is one of the UK’s leading landscape photographers, contented himself with the egg collection of National Museums Scotland (one of the largest in the world), where he clicked away using state-of-the-art image layering technology to produce a stunning portfolio of (almost) 3D images, razor sharp from front to back, each photo comprising as many as eighty exposures digitally blended to produce the final result. These egg icons alone would be enough to justify the cost of the book, but because Prior is an artist with a camera, he’s continually looking for the hidden connections in the world before him, and so he took it upon himself to photograph the habitat from which the eggs originate. The result is that each egg is presented in a diptych opposite some proper old school landscapes for which Prior is best known. One of the most stunning effects of this beautiful book is the way in which the photographer connects the colours and patterns of both egg and landscape in a way that forces your eye to flick back and forth from one to the other.

It’s quite frankly a brilliant concept, executed with the deftness of a world class photographer at the very top of his creative game. Coming at a time when the natural environment feels more vulnerable and frangible than ever, Prior’s ‘Fragile’ serves as a reminder that there is a beauty and complexity to our world that can be expressed in something as simple as an egg. 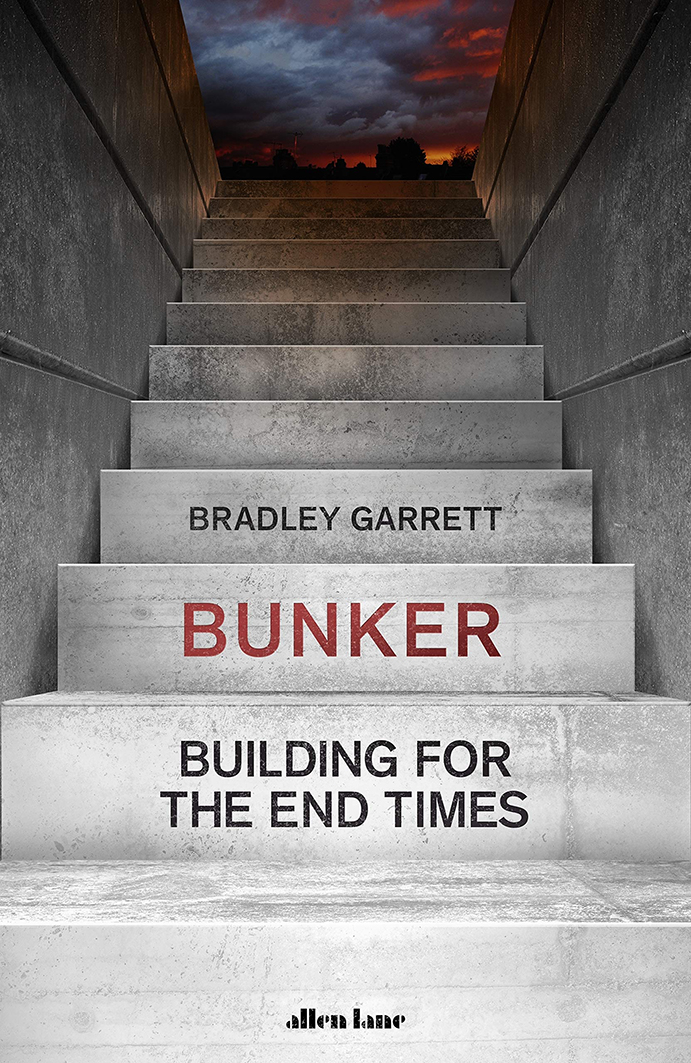 If you’re tempted to think of bunkers as the architecture of the paranoid, insane or just plain weird, it’s time to think again because ‘Bunker: Building for the End Times’ is as much about the need for sensible, structured preparation for societal collapse as it is the camouflaged ‘survivalist’ cliché. Author and urban explorer Bradley Garrett has spent years travelling the world visiting some of the strangest subterranean buildings known (and often unknown) to the wider public. In the process he’s put himself in personal danger, ended up with a criminal record and written an extremely thought-provoking book.

Humans, as Garrett tells us, have been bunker-aware since prehistory, and yet it seems that these days there’s more for those preparing for Armageddon (so-called ‘preppers’) to be on the alert for than ever. Of the Covid-19 pandemic, Garrett says: “The pandemic was precisely the kind of breakdown preppers had prepared for. While most people panic-bought toilet paper, the preppers closed their blast doors.”

What makes Garrett’s book so gripping is his presentation of the balance between fringe thinking and mainstream thought in such a plausible way. On the one hand, we get to know the self-important prepper entrepreneur whose paranoid daydreams seldom get further than the drawing board, while on the other we have credible accounts of substantial architecture designed to sustain post-apocalyptic communities underground. All of which exposes the tension that will consume readers of this mind-expanding book: that of wanting to dismiss the world of bunkers as the domain of the ‘green ink brigade’, while acknowledging that there has never been a more compelling case for taking emergency preparation seriously. 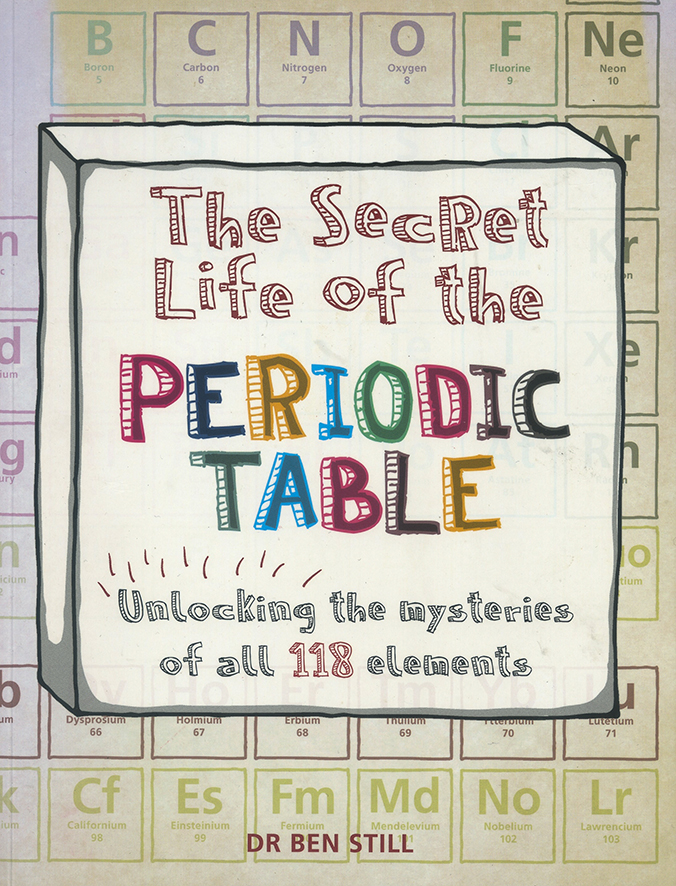 With any luck by the time you read this your kids and grandlings will be back at school sweating away over their textbooks having a thoroughly miserable time, just as we all did back in the day. And of course, there is no misery greater than chemistry, what with all those elements, numbers and symbols that never seem to match up to anything. Of course, I’m talking about the Periodic Table, a graphical index of the 118 elements that make up the world. Put like that, it really should be more interesting than we remember it, shouldn’t it? Well, with the help of Dr Ben Still’s ‘The Secret Life of the Periodic Table’ the whole thing comes to life and starts making sense. It’s friendly too. Those of us of a certain age will recognise the illustrative style of the cover as an unashamed homage to the Adrian Mole franchise. And while it might require a certain type of mind to find the fact that the element polonium is named after the native land of its discoverers, we’ll all take ghoulish delight in recognising it as the poison that did for the Russian defector Alexander Litvinenko after the only recorded case of polonium poisoning. The book is crammed with juicy facts like this, to the point where I really wish that I’d had this book at school. Great stuff. 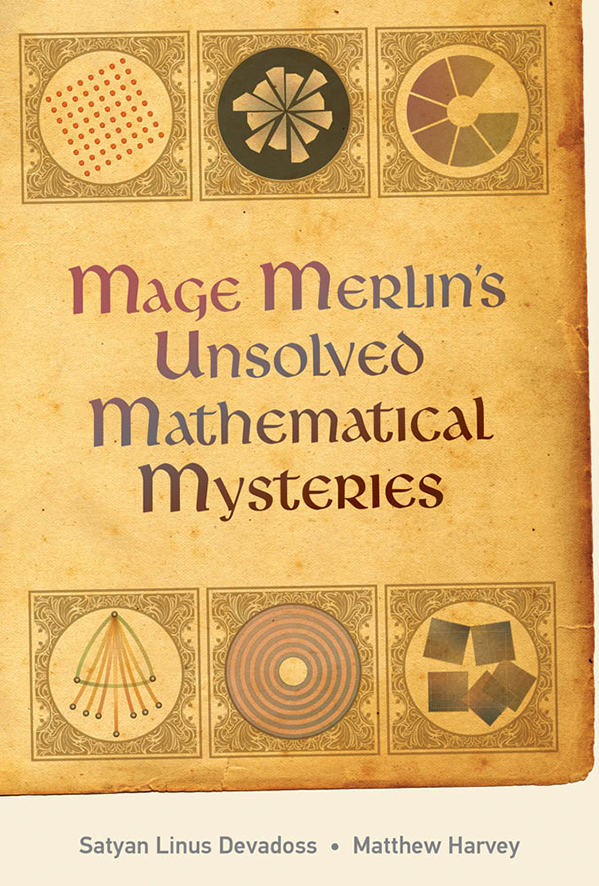 For most of us mathematics is just one of those complicated inconveniences in life that has thankfully been taken away from us by the processing power of laptops, mobile phones and credit card readers. For a few of us, perhaps, maths is a set of useful tools handed down to us through the ages from its origins in the counting of livestock on our fingers, to the abstract brainy stuff that goes into the integrated circuits that power our laptops, mobile phones and credit card readers. And there it ends, with the exception perhaps of some bizarre abstract maths that has nothing to do with everyday life and is reserved for bearded, socially awkward professors. Not so, say the authors of ‘Mage Merlin’s Unsolved Mathematical Mysteries’: maths shouldn’t just be seen as a utilitarian toolkit for the digital age, because it’s full of wonder and mystery that takes us ‘to the edge of the unknown.’ One of the things about maths that is so appealing to the authors is that there are puzzles that are as old as the hills that simply have never been solved despite our throwing masses of computing power at them. To draw attention to how old some of these conundra are, the authors frame them in Arthurian legend, with each mystery a sword awaiting to be pulled from the stone and each solution a Holy Grail. Added to that, the beauty of this book is that to the non-mathematician the 16 mysteries look so easy to solve, which means that it comes as something of a surprise at the end of every chapter to find Mage Merlin “with all my powers of magic and logic” is unable to produce the answer. 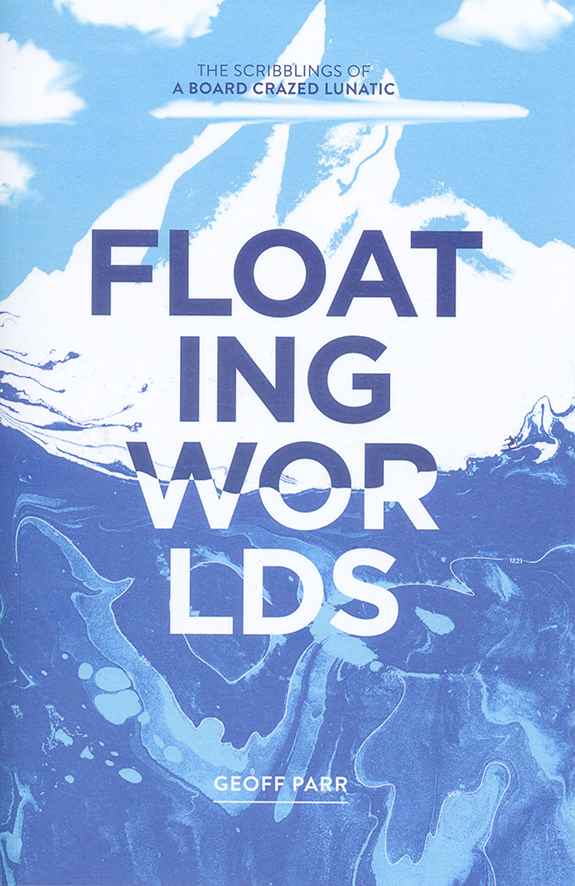 Somewhere deep inside Geoff Parr’s Floating Worlds there’s a story made of loosely interwoven threads, that at first glance is all about skateboarding, surfing and snow-boarding. But it’s actually about so much more. While the rudimentary ‘facts’ of Parr’s tale (the rise of snowboarding in the UK and the ‘Welsh connection’) propel us along a literal path, Floating Worlds is also a charming account of how a counter-culture edged its way into a mainstream of sorts, bringing with it the unexpected rubble of practical experience. But if you treat it as just that, you’ll miss so much of the joy of wandering around inside the musings of a self-confessed ‘board-crazed lunatic’. Board-crazed he might well be, but he’s also a Swansea boy who once revelled in an easy-going sunlit world where there weren’t so many boring rules as there are today. One of the reasons he intellectually rejects an early snowboarding manual is because it has the word ‘ski’ in the title.

And that’s no good for Parr because skiing represents the old guard, the fossilised snobbery of a world in which fun seems to have left the room. Amid the details of the politics and commercialisation of a fledgling rebel sport, there’s also a tale of growing up, of having to make decisions about what’s important in life. All of which means Floating Worlds is a fine book, not so much for its account of board sports, but because of its outlook on life. I’ve never been on a snowboard in my life, and yet such is the weird and wonderful world of Geoff Parr that I couldn’t put his book down. 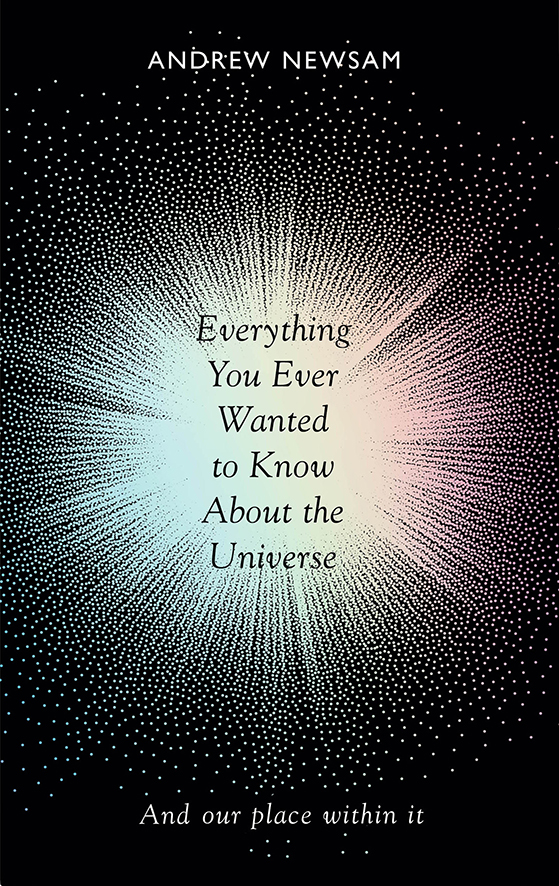 ‘Everything you ever wanted to know about the Universe’ by Andrew Newsam, Elliott & Thompson, £11.99, pb

The Universe is a beautiful, awe-inspiring place – from glowing nebulae to the sweeping majesty of the Milky Way, from complex cloud patterns on Jupiter to the rippling curtains of aurorae. But, says Andrew Newsam early in his fantastic new book – ‘Everything you ever wanted to know about the Universe’ – many of us struggle to grasp the complex ideas and science behind it all, making it hard to see how it relates to our everyday lives.

Professor of Astronomy at Liverpool John Moores University, Newsam has spent the past two decades (among other things) working on some of the largest astronomy projects in the world, and he draws on this experience to show us what’s going on beyond the limits of our planet, from our solar system to distant galaxies. More than that, he gives us the lowdown on just what this tells us about our own place in this vast expanse called ‘the Universe’.

Will our explorations of our neighbouring planets reveal life or a new place to settle? What happens inside black holes? Is dark matter real? Would a solar flare have a devastating effect on our planet? Could we do anything to prevent being wiped out by an approaching asteroid? What can observations of stars reveal about our origins, and our future?

Everything You Ever Wanted to Know about the Universe is one of those books that is crammed with technical stuff, but by some miracle of authorship is simultaneously a really good read in which it’s just about possible for the non-technical reader to understand enough of what’s going on to realise that there’s way much more to the Universe than meets the eye.