Continuing with her journey through west Scotland, Liz and her partner Gareth travelled to the Isle of Skye, capturing its rugged beauty with her camera 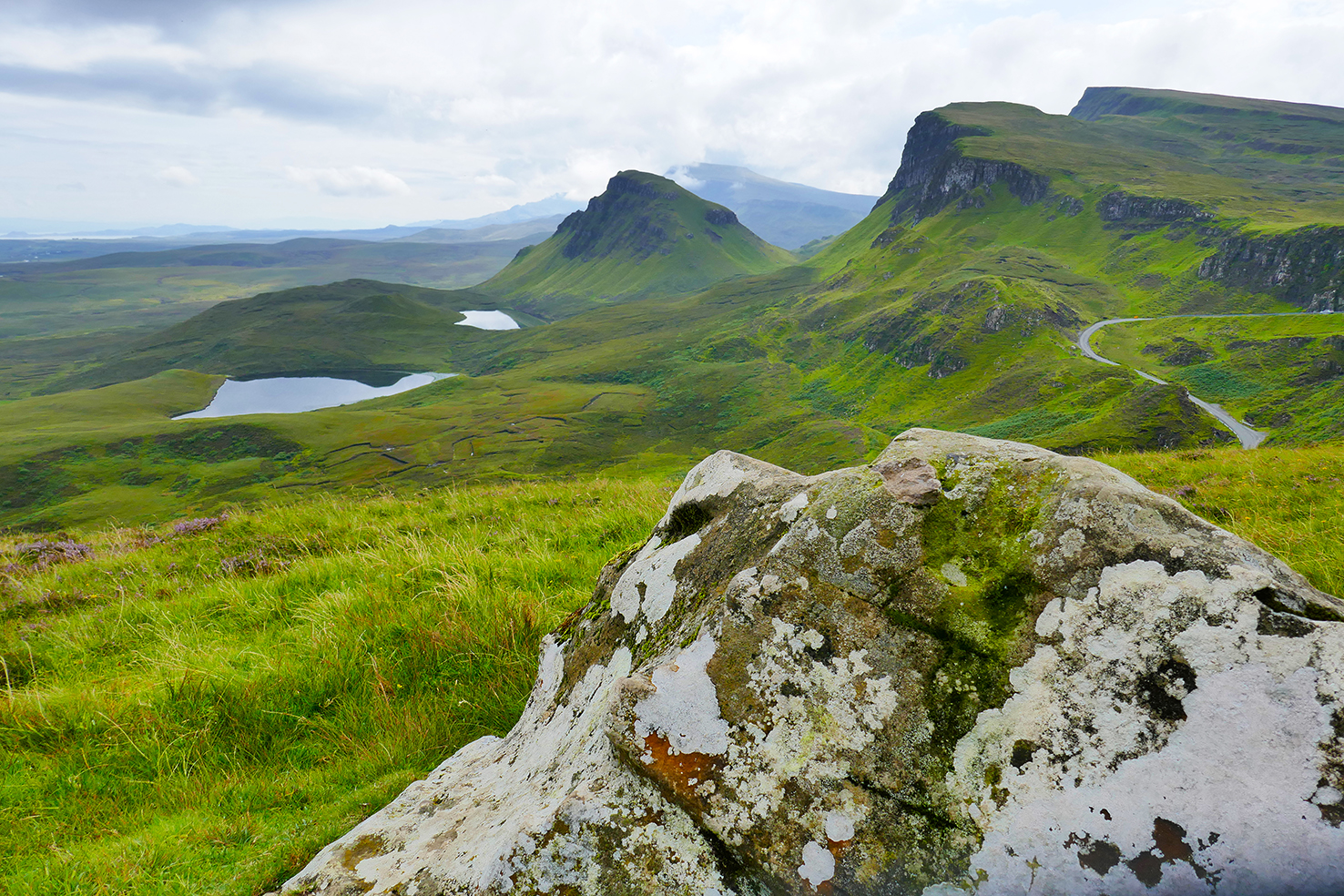 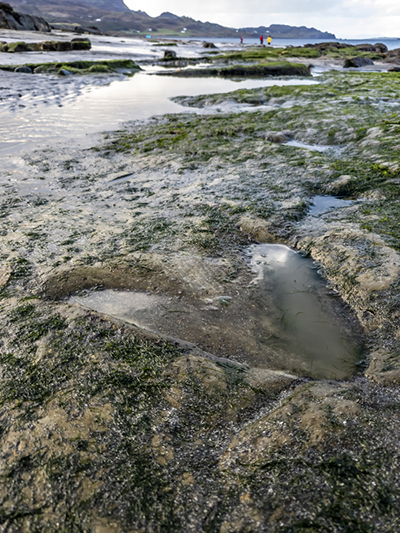 Skye is the largest of the islands in the Inner Hebrides, and its history stretches back in time to when dinosaurs walked the land leaving footprints on the shores of Staffin beach on the north east coast of the island. It’s a magical mystical place infused in legend, with tales of giants and fairies who make their presence felt in the rock formations and glens.

The island has been inhabited for more than 6000 years, and it has a turbulent history. There are castles, clans and tales of Bonnie Prince Charlie who crossed over to the island whilst escaping to France disguised as a servant, after the failure of the Jacobite uprising of 1745.

There are mountains and water-falls, white beaches and a solitary lighthouse, a landscape where sheep and cattle roam freely throughout the farming crofts. Artists and artisans inspired by the landscape, produce textiles, pottery, jewellery and crafts in homely workshops and galleries. The open sea is teeming with wildlife, best explored by boat to the sounds of seabirds soaring on the wind. 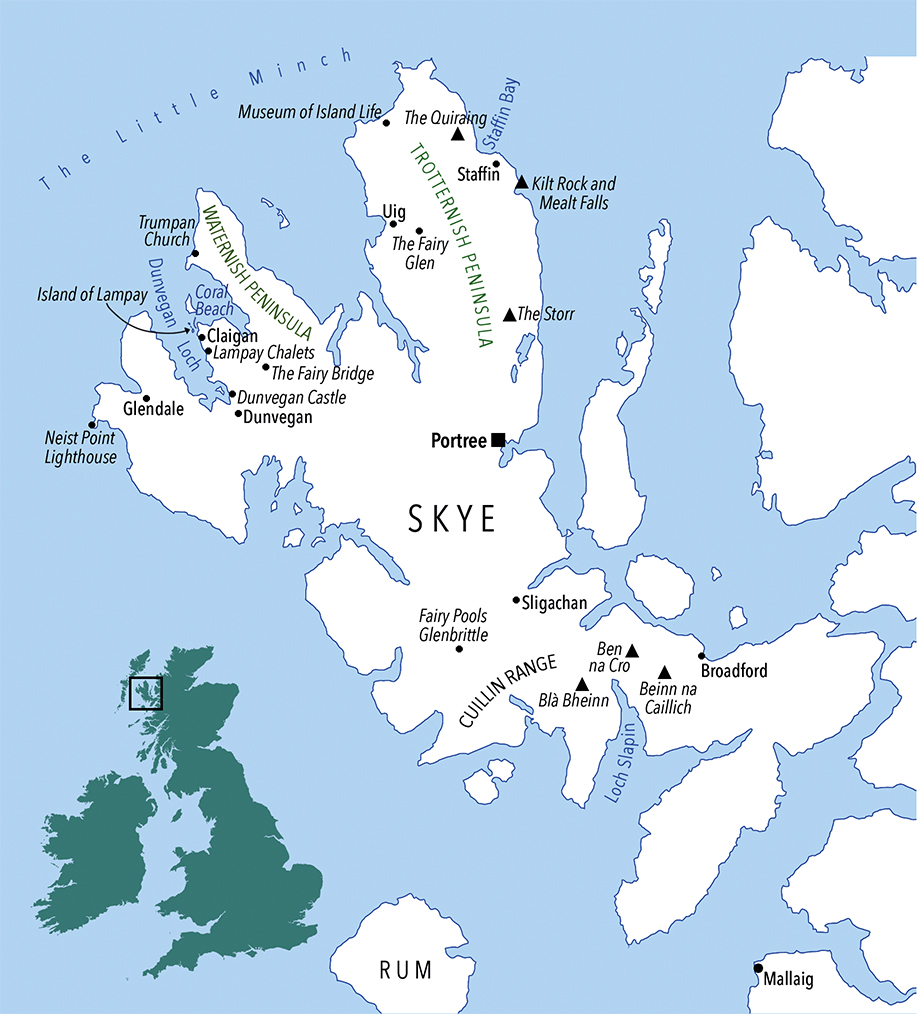 It’s a perfect location to seek out the elusive Northern Lights and the dramatic sunsets are bewitching, silhouetting the islands of the Outer Hebrides across the Little Minch. The silvery waters mirror the sky like an artist’s canvas swept with brush strokes of gold, pinks, fiery orange and red.

Skye is an island of culture and tradition, where road signs are in Scottish Gaelic, a Celtic language native to Scotland still heard when locals are chatting.

It took 45 minutes by ferry to sail from Mallaig on the mainland to the 50-mile long island. As it was midge season on Skye (they were the most annoying here out of all our trip), we chose to stay at Lampay Chalets, a family croft situated on the north west of the island overlooking Dunvegan Loch. We shared the site with a flock of Cheviot sheep, hens, ducks and a pair of boxer dogs called Murphy and Skye. An idyllic, peaceful location that meant I only had to step outside, point my camera and click away to capture the most amazing sunsets.

Four days was certainly not long enough to appreciate all the island has to offer. The scenery was out of this world and these images only capture a fleeting visit to the Isle of Skye.

The John Muir Trust looks after three estates on south-ern Skye, Torrin, Sconser and Straithard which covers the area between Broadford and the Cuillins, incorporating rugged coastline, peat lands, crofts and grand mountains. The Cuillin Range has 12 Munros – peaks above 3000ft (914m) formed by moraines, scree and frost shattered rocks created over 10,000 years ago. A paradise for walkers and climbers, the spectacular mountain landscape also becomes a familiar backdrop as you drive across the island.

Loch Slapin is a 6km long sea loch in the south west of Skye, the deep blue water is framed by several of the Cuillin Mountains including Bla Bhenin, an area where the transition from Black to Red Cuillin begins. 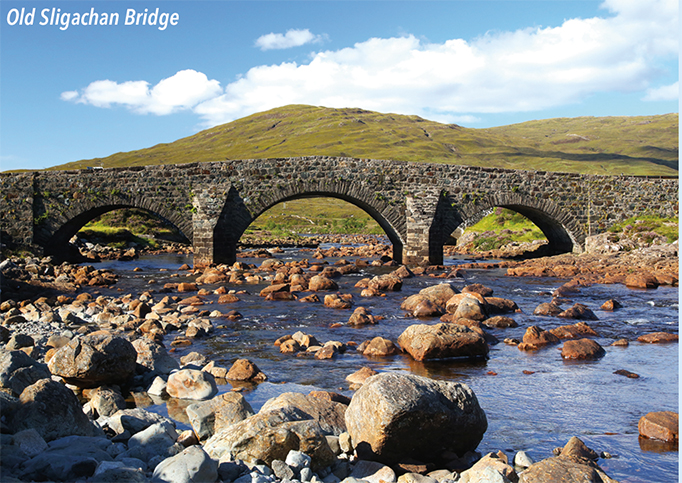 Old Sligachan Bridge has a tale attached to it; a fierce female warrior called Scathach roamed Skye, her reputation reached Ireland and Cu Chulainn the country’s favourite warrior travelled here to fight her. The battle raged on for weeks, Scathach had a daughter, who grew tired of the fighting, fearing for her mother’s life, she ran to the river tears flowing pleading for the fighting to stop. Unbeknown to her the water is a gateway between our world and the faerie world, they heard her plea and told her if she placed her face in the water for 7 seconds she would have a solution. She g 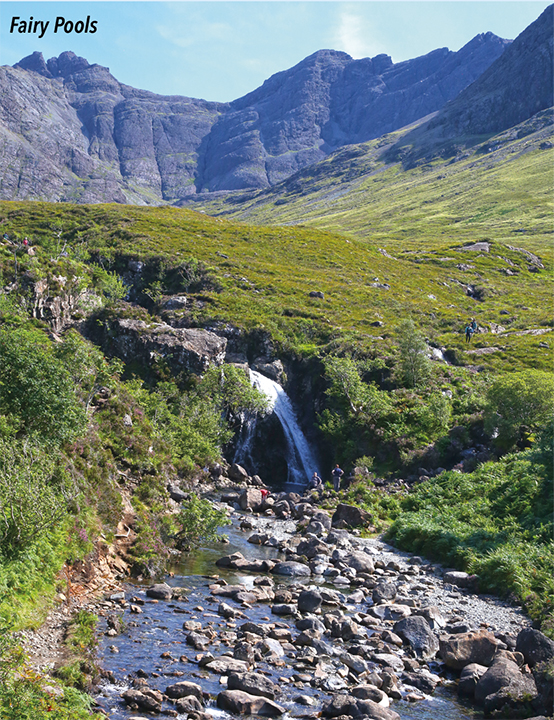 athered ingredients from across the island and prepared a meal, the delicious smell reached the battling warriors, they took a break and returned to Scathach’s home to eat. Cu Chulainn had become a guest and that meant you can do no harm to your host or anyone within, the fighting ended, and a truce was called between the two. And to this day it is believed if you can brave the cold water that flows beneath the bridge and stick your face in it for 7 seconds, letting it dry naturally the Fairies will grant you eternal beauty, due to the tears of love that poured into the Sligachan River by Scathach’s beautiful daughter.

Following on from fairy tales, the Fairy Pools in Glen Brittle are filled with clear water from the Cuillin, the deep blue pools have become popular for wild swimming and on warm sunny days the area is filled with families walking along the paths which cross the river, to brave a dip in the magical mountain water. 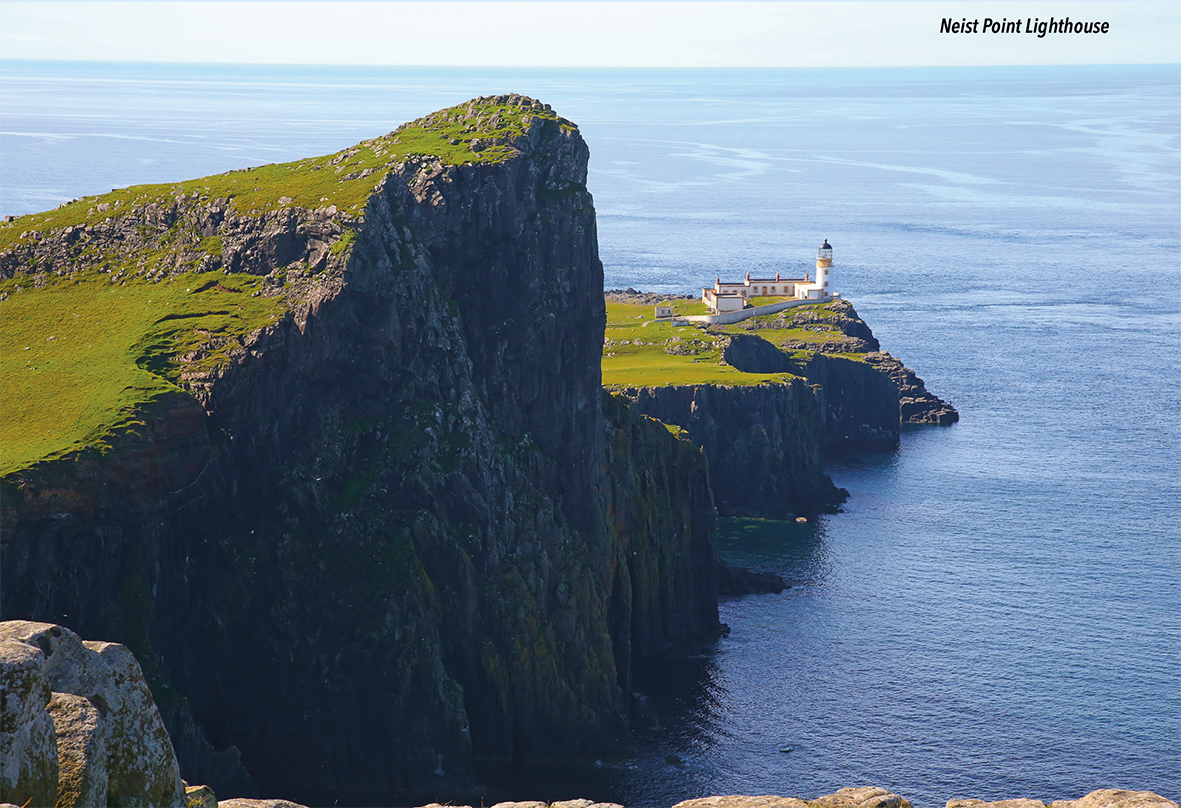 Neist Point Lighthouse sits on its own little nest of rocky land at the base of crinkled cliffs dipping into the sea at the most westerly point of Skye near Glendale. At sunset the headland above is lined with tripods as landscape photographers capture the view. 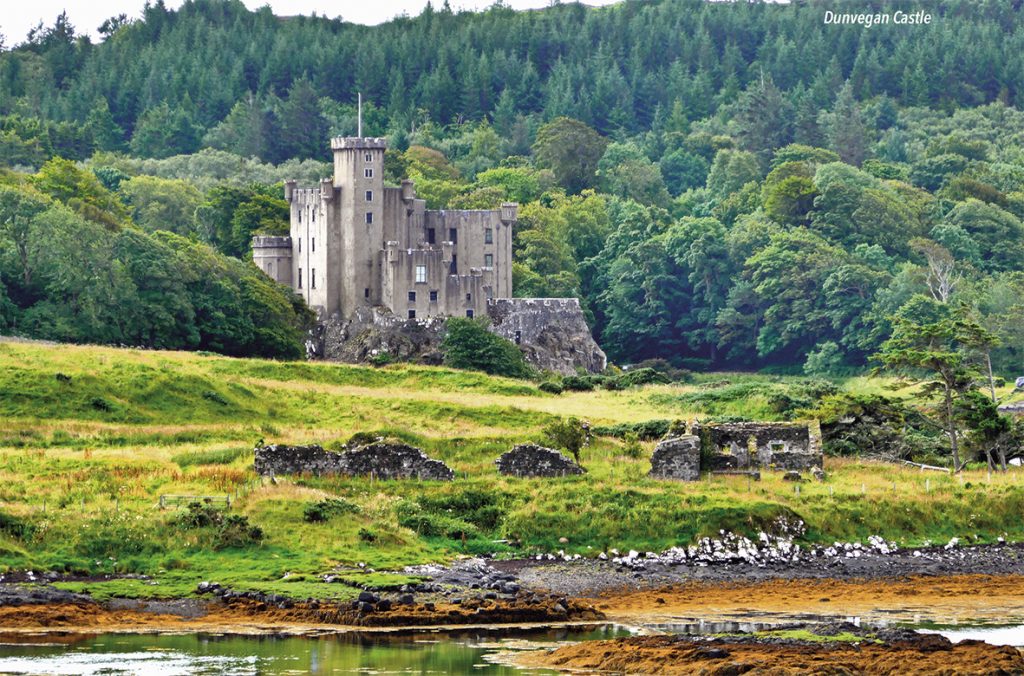 Dunvegan Castle is the ancestral home of the Chiefs of clan MacLeod and has been for the past 800 years, it is the oldest continuously inhabited castle in Scotland. The fortress and gardens poised atop a rocky outcrop skirted by Loch Dunvegan built to keep people out now welcomes visitors to the estate.

Skye is not known for its beaches though one stands out from all the rest, Coral Beach in Claigan, just north of Dunvegan. It is not actually made up of coral, but pieces of calcified, sun bleached seaweed 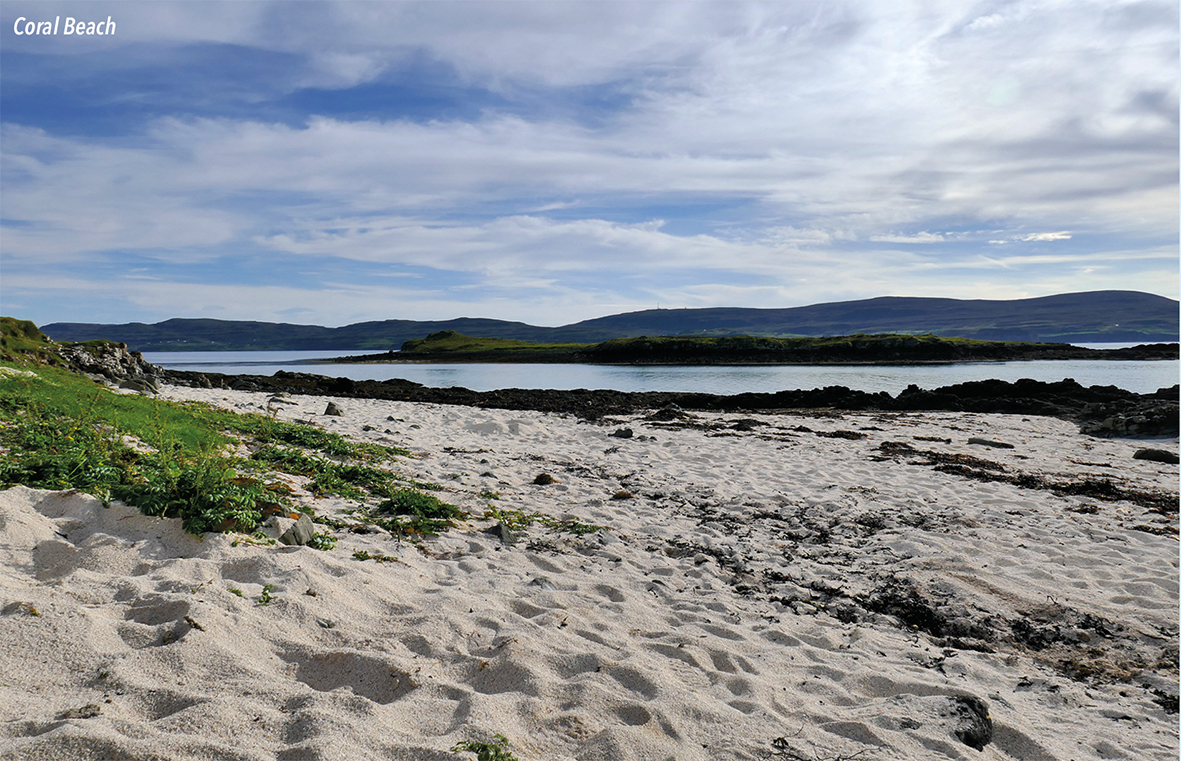 known as maerl, so white that when the sun comes out it transforms the water into a tropical blue. The uninhabited tidal island of Lampay can be explored at low tide just a short walk from the shore.

Passage to the Waternish Peninsula is across a Fairy Bridge. A Chief of the MacLeod’s married a fairy, she could only stay with him a year before returning to her people, the bridge is where she departed. She left their son behind wrapped in a Fairy Flag, which could be used three times to protect the clan, the flag can still be seen today at Dunvegan Castle.

Trumpan Church now in ruins used to be at the heart of a thriving medieval township. Both came to an end on the first Sunday in May 1578 following The Battle of the Spoiling of the Dyke. While the MacLeods were at prayer, the MacDonalds of Uist barricaded the church and set the thatch alight, this was a revenge attack. A young girl from the MacLeods survived, she escaped through a window and ran to Dunvegan for help. Having raised the Fairy Flag an army of MacLeods arrived at Trumpan. Through exertion and drink they found the MacDonalds asleep and proceeded to kill them. The bodies were then lined up beneath a dry stone wall (dyke in Scottish) and buried as it was pushed on top of them. 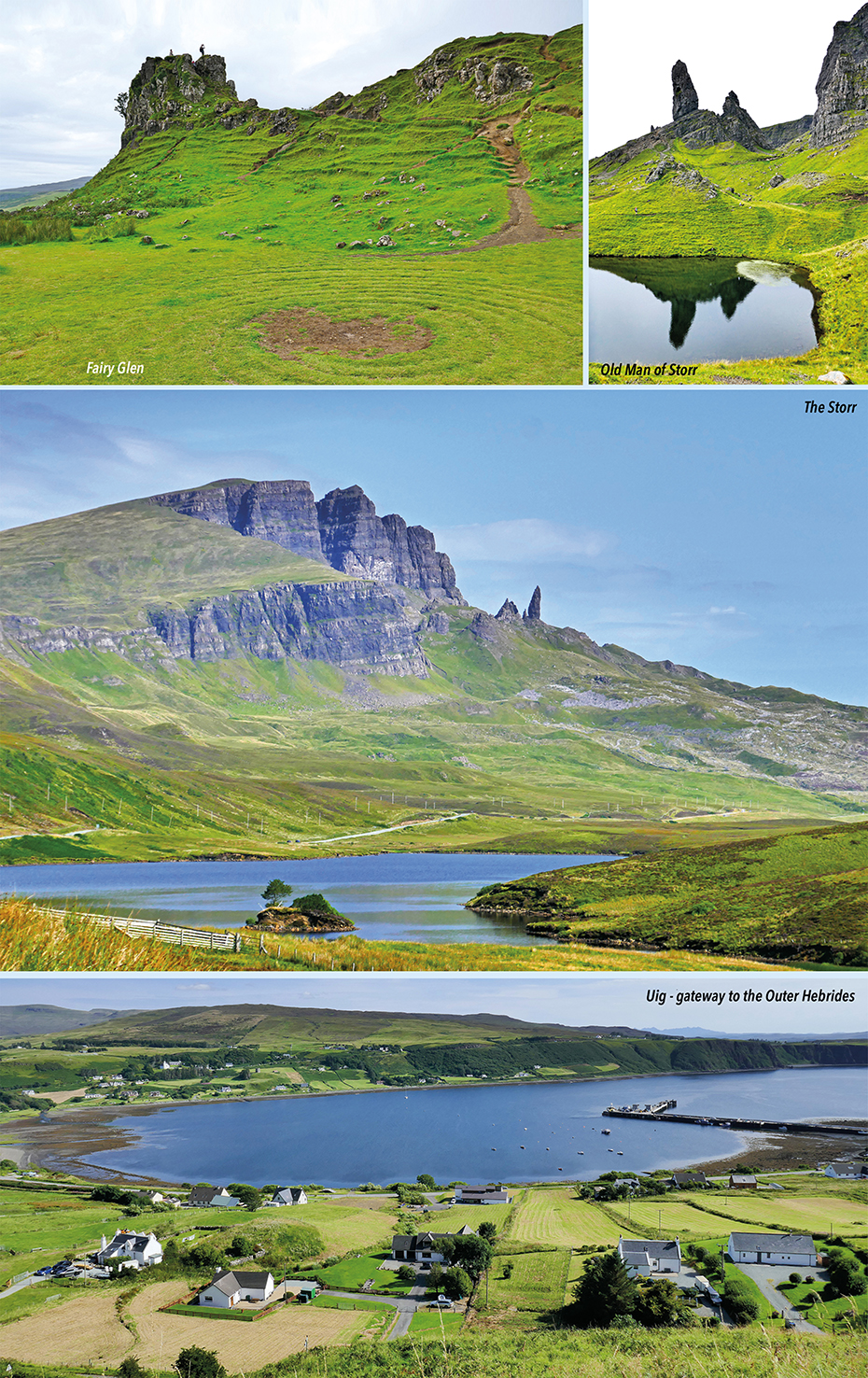 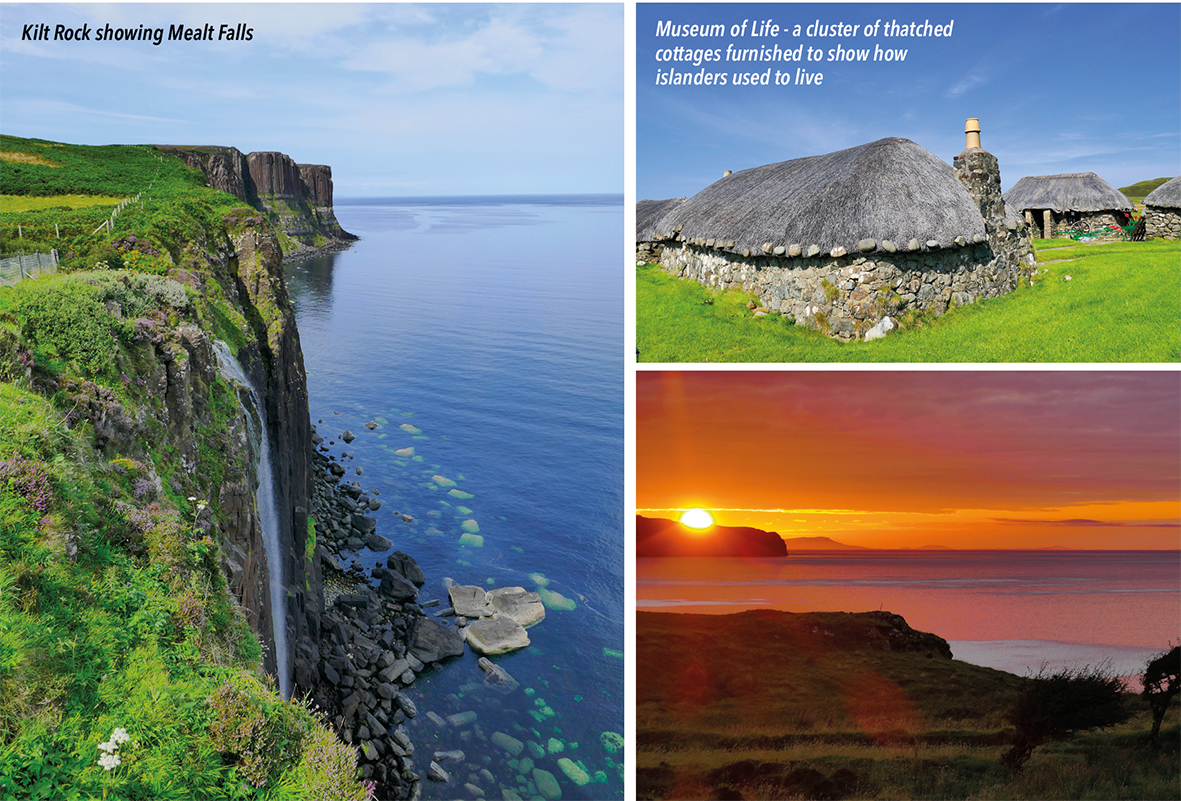 Fairy Glen is like a miniature Quirang, paths wind around grassy hillocks and ponds creating an otherworldly atmosphere.

The Quiraing, derives from the Old Norse word Kvi Rand meaning Round Fold, an elevated fold lies within pillars and is believed to be where Vikings hid their cattle from raiders. Sitting along the eastern escarpment of the Totternish peninsular the series of imposing peaks and valleys moulded from a landslide has produced a distinctive landscape, moody formations that emerge through the clouds have been named The Needle, The Table and The Prison. 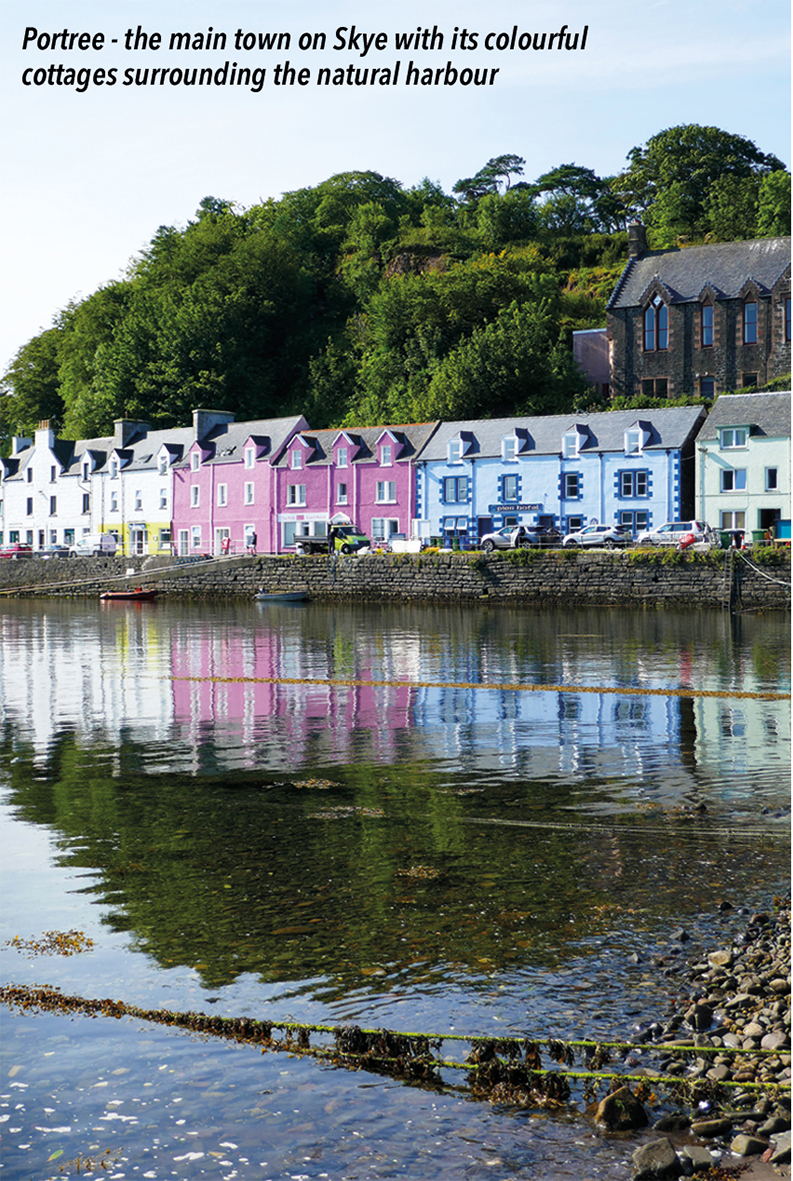 The Storr was also created by an ancient landside, though legend has it that Old Man of Storr was a giant who lived in the Trotternish Ridge and when buried, his thumb was left jutting out the ground, creating the famous jagged landscape seen today.

At Kilt Rock, as if following the highland traditional fashion, the dark sea weathered basalt columns sweep across the landscape like a pleated kilt, washed over by the 328 feet Mealt Falls which plummet onto the shoreline below.