This month we take a look at the designs of the heyday of the American railroad, find out from one of our best landscape photographers how to photo-graph South Wales, discover the secret mathematics that will give you the edge over the modern world, plus much more…

Bay Book of the Month 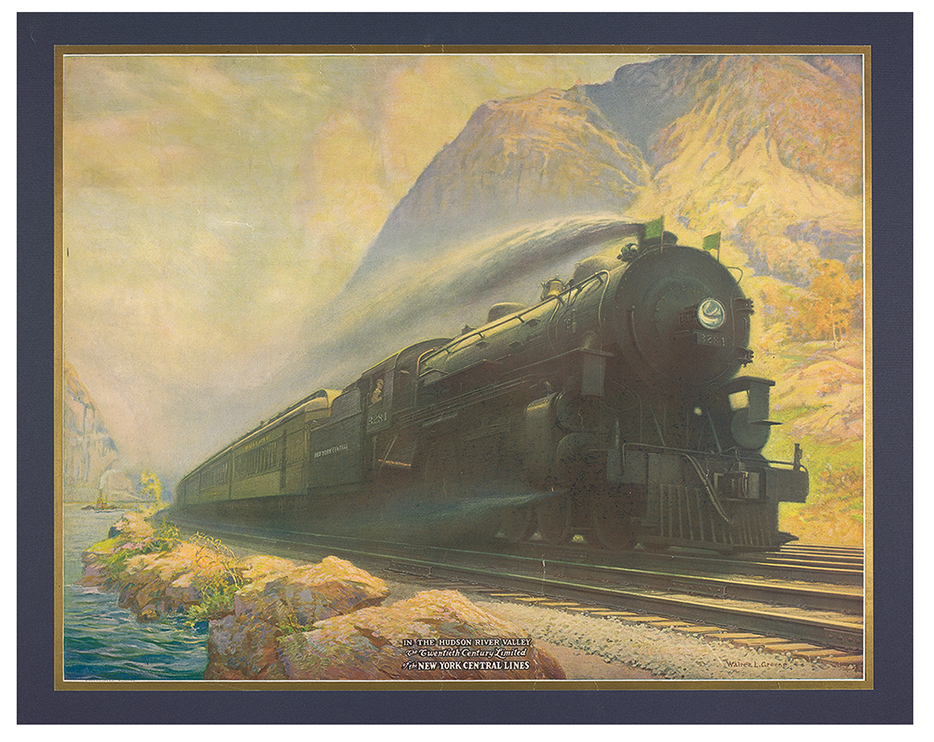 It doesn’t really matter where you come from, there’s something about the heyday of the great American railroad that touches the nerve that goes straight to the nostalgia receptors in the brain. For some, it will be the dream of endless journeys across the Big Country to the rhythm of the rolling stock so perfectly captured in the classic songs of the likes of Johnny Cash. For others, it will be the livery of the railway companies, the graphic designs of their posters and fliers, and the classic logos of the locomotives themselves. 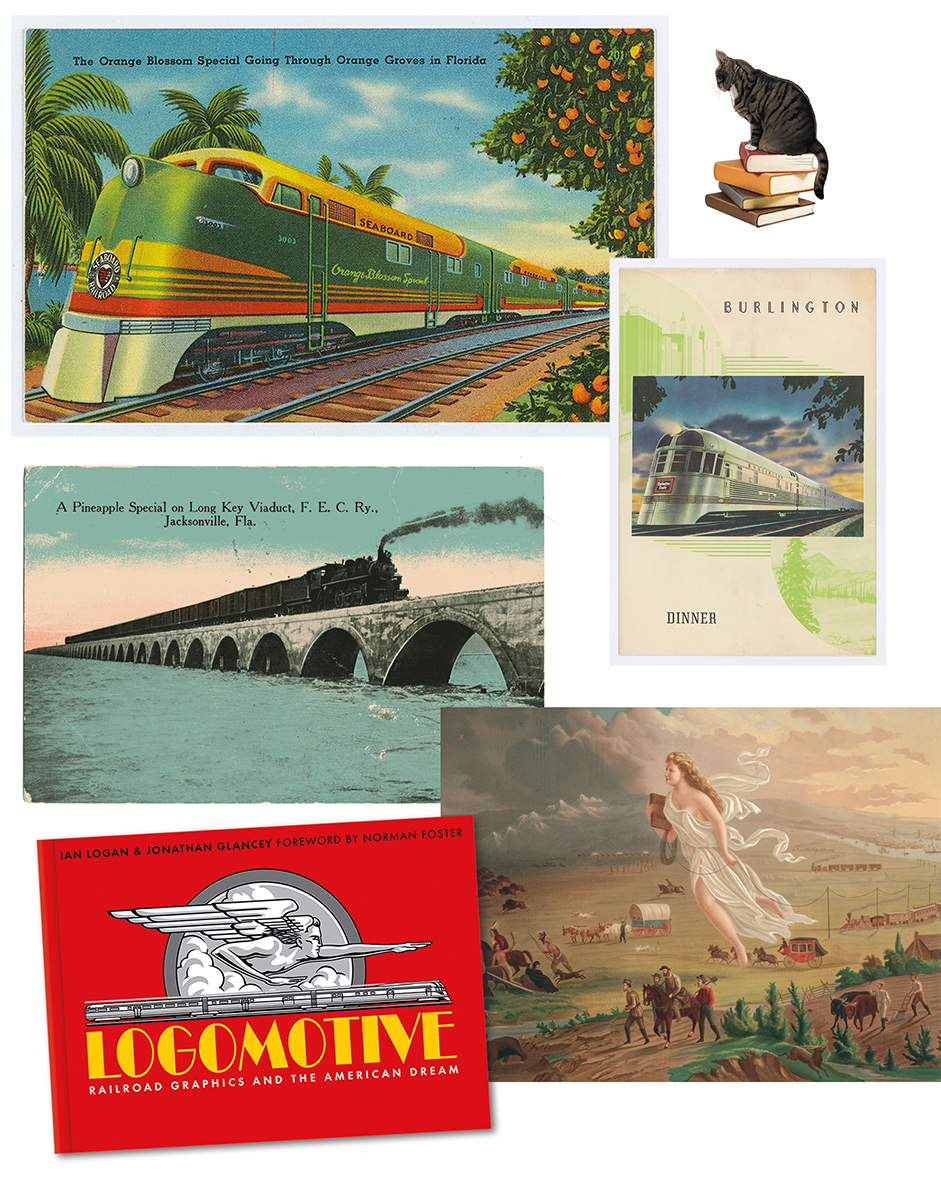 If you are Ian Logan or Jonathan Glancey, co-authors of the irresistible ‘Logomotive’, as the book’s title suggests, the two concepts can’t be separated as they speak of a bygone age.

‘Logomotive: Railroad Graphics and the American Dream’ is their tribute to the heyday of railroad graphics and design in mid-century America, when cars were big, had fins and plenty of chrome, while trains, far from being the utilitarian vehicles that they are today, were designed to look like aeroplanes. Arriving in the States in 1968, London designer Ian Logan – who made his name designing fabrics for Mary Quant and Jeff Banks – was ‘blown away’ by the logos and slogans he saw painted on the sides of freight cars rumbling down Main Street.

Graphics became his secret romance, and in the decades following he returned time after time, photo-graphing logos on the sides of trains, collecting old timetables and buying up railroad ephemera in antique shops. He discovered the Rock Island Line, the Burlington Route, the Route of the Eagles, the Speedway to America’s Playground and many other mesmerising advertising ideas of the day. He even got to ride in the cab of the California Zephyr. In this sumptuously illustrated collection, transport journalist Jonathan Glancey looks behind Logan’s wonderful collection, telling the story of the com-panies that commissioned them. He shows how every aspect of the railways was designed to project an image of speed, efficiency, adventure and the American Dream. It’s a terrific book and one that is an enduring testament to the way advertising once used to be: confident and classy. 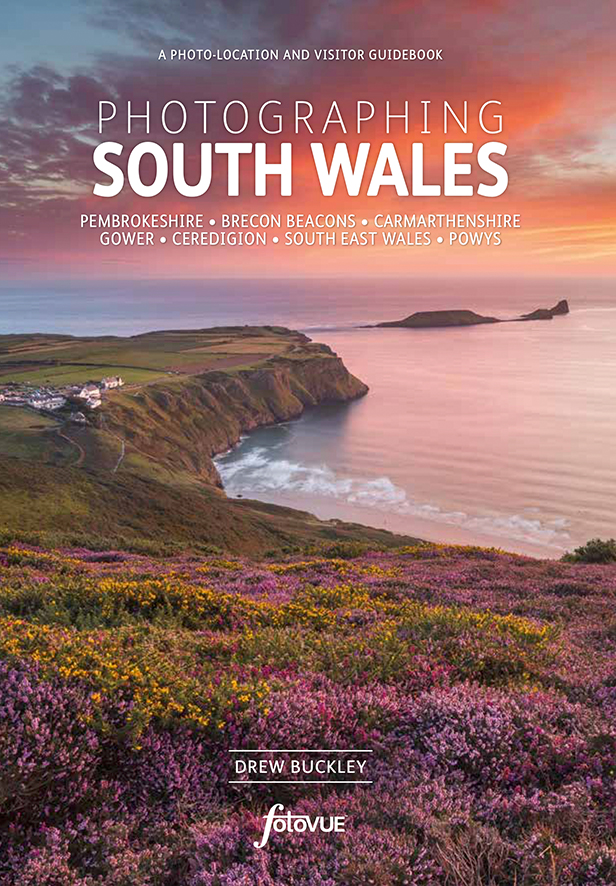 While none of us will need telling just how spectacular the coastline of South Wales is, we could probably all do with a helping hand when it comes to photo-graphing it. We all feel extremely sorry for those poor unfortunates who are yet to appreciate the glories of South Wales, but without decent photos it’s going to be pretty difficult to show off to others exactly what they’re missing. Well, help is at hand in the form of Drew Buckley’s superb ‘Photographing South Wales’, a 400-plus page monster of a book, that the author tells me took a whopping four years to put together. And it shows, because not only has Buckley managed to present the region in photographs of the highest professional standard, but he’s also captured the seasons, the weather, the wildlife, the botany and much more besides.

Divided into geographical regions, ‘Photographing South Wales’ covers Buckley’s home territory of Pembrokeshire, as well as our very own Lordship of Gower, with the Brecon Beacons, Carmarthenshire, Ceredigion, Powys and South East Wales making up the rest of the book. He writes in a comprehensive and authoritative manner about the places you can expect to visit: how to get there, the best times of the day or year to do so and what the best view-points are. It’s often been said that you shouldn’t judge a book by its cover, but Buckley’s shot of Worm’s Head at sunset with heather and gorse in the fore-ground that forms the opening shot of his book is a stunner, as are all the others that follow. 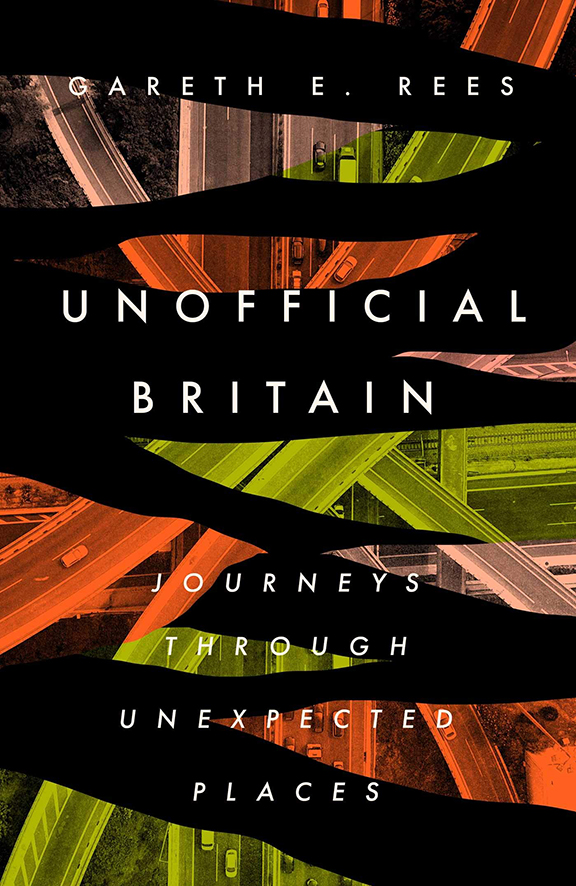 According to Gareth E Rees, there is a Britain that exists outside of the official histories and guidebooks: places that lie on the margins, left behind. It is a Britain shuffled into the cracks of the urban facade where unexpected lives go unnoticed. This ambience is what gives the title to his book ‘Unofficial Britain’, and this is his journey through those unexpected places. A writer on modern myths and living folklore, Rees (who is of both Welsh and Scottish descent) escorts us through a land of indust-rial estates, factories and electricity pylons. His is a realm of motor-ways and ring roads, of hospitals and housing estates, of roundabouts and flyovers. These are the places where modern life speeds past, but where people and stories nevertheless collect. As a geographer of these fringe zones, Rees goes in search of human drama, along the way meeting outcasts, artists, the homeless and the disenfranchised.

The result is a rich and powerful, though at times thoroughly uncomfortable, account of an overlooked and often deliberately ignored landscape that runs like a thread through the fabric of the history and geography of Britain. Though mundane and neglected, these places can be as influential in our lives and imaginations as any picture postcard tourist destination.

‘Unofficial Britain’ is one man’s well-observed and riveting voyage of discovery along the edges of a land brimming with mystery, folklore and myth. Not to be missed. 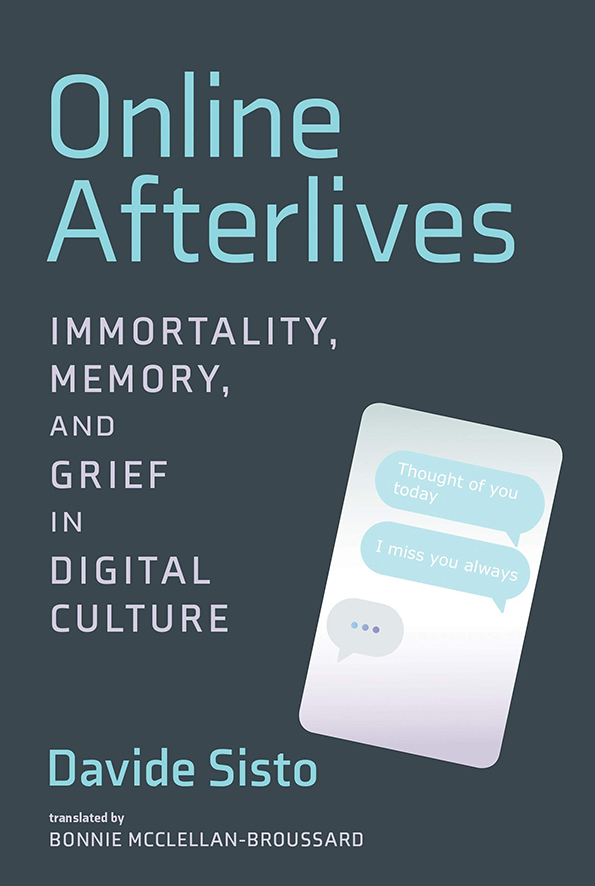 The idea that you continue to exist digitally after you’ve physically shuffled off this mortal coil is in some respects quite subtle. As anyone who has experienced receiving social media updates from someone you know to be dead can confirm, it can be a weird experience. This is because in the digital age, there’s another layer to the ‘beyond’ quite unlike any society has experienc-ed before. ‘Online Afterlives’ is Davide Sisto’s valiant attempt to explain the phenomenon of cyberspace as the biggest graveyard ever created, in which ‘countless acres’ are taken up by photographs and videos, as well as the thoughts and memories of those that have shared their last status updates. ‘Online Afterlives’ essentially deals with digital ghosts.

But the concept can be quite blunt too, and when Sisto reminds us that while Shakespeare, Mozart and Rembrandt are literally dead ‘as physical human beings’ – a phenomenon he labels ‘ordinary mortality’ – they live on through their creations, we’re left wondering in what sense ‘extraordinary’ mortality in the digital space might be different. Again, it’s a split decision, because on the one hand there is overwhelming trivialness (screeds of old emails, prescriptions and pdfs), while on the other there is the important point that the digital world has shunted us out of our embarrassed silence of something that’s ‘not talked about’ to the world of social media in which all opinion is valid as long as you agree with it. Thought-provoking and digitally macabre, ‘Online Afterlives’ will have you deleting everything. 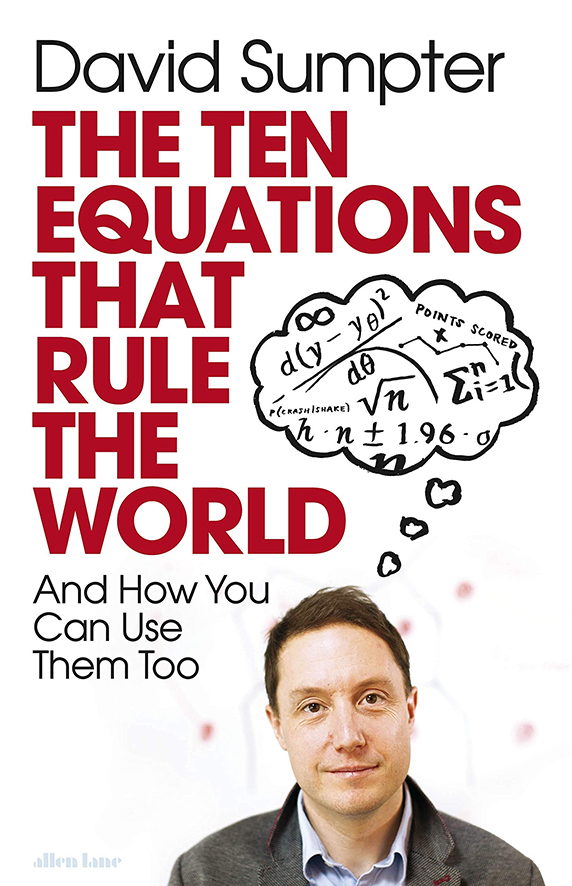 ‘The Ten Equations that Rule the World’ by David Sumpter, Allen Lane, £20, hb

There is something comforting in the idea that everything messy in our lives can be explained with mathematics. That there are equations tucked away in some seldom-visited corner of academia that can provide solutions to the chaos won’t come as much of a surprise. But the fact that there is a mathematician patient enough to explain it all, quite frankly, is. If you’ve ever wondered if there could be some sort maths to determine how far into a Netflix boxed-set you should descend before bowing to the inevitable, help is at hand with David Sumpter’s brilliant ‘The Ten Equations that Rule the World’. ‘Help’ might be the wrong word because, while having the appearance of a business ‘self-help’ manual, this is in fact a quite serious (although remarkably easy to get stuck in to) analysis of those seemingly random (and often trivial) aspects of our lives that are just crying out to be tidied up.

Although hugely entertaining, ‘Ten Equations’ presents a slight problem in that, unless you’re a maths wizard, you’re going to find it difficult to apply these equations to winning money on the Grand

National, despite the fact that if you have enough time, it is mathematically certain that you will eventually come out on top (please note, by ‘time’, here we are talking in terms more closely associated geological era and don’t blame Bay magazine if you come unstuck). But what you will come away with is a much clearer idea of why the world is less messy than it appears, if not exactly how this can be expressed (or even understood) in mathematical hieroglyphs. 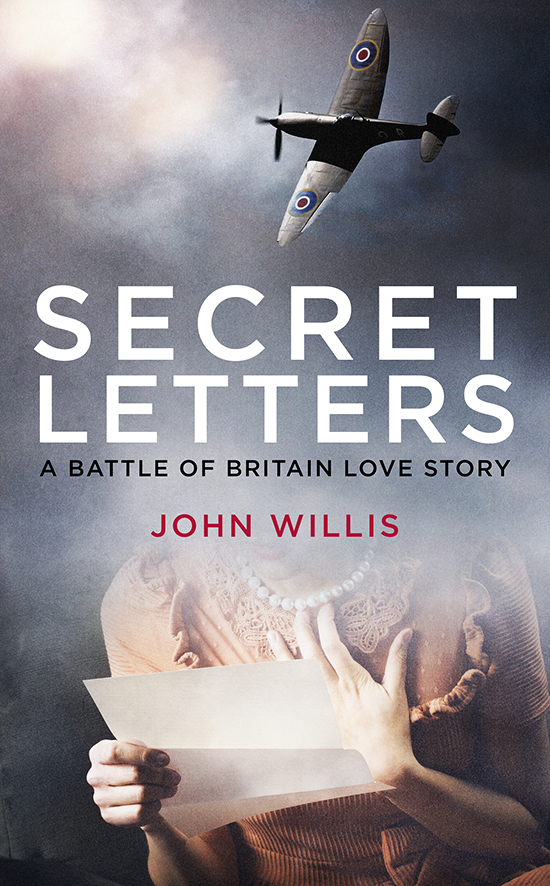 As the Battle of Britain makes its stately progress from living memory to the history books, it’s tempting to see one of the turning points in the Allied march to victory in the Second World War as an abstract game of statistics payed out by academics and economists with competing theories. And so, it is something of a timely reminder of the human side of war to come face to face with newly discovered contemporary letters that tell in the most personal and human terms imaginable what it meant to be caught up in that moment in history.

Published to coincide with the eightieth anniversary of the first large-scale military battle to be fought entirely by air forces, TV documentary producer John Willis’s ‘Secret Letters’ is based on a series of until now unpublished letters from British intelligence officer Geoffrey Myers to his French wife and two half-Jewish children who were desperately trying to escape from Nazi-occupied France. Written from ‘beyond the grave’ (Myers assumed he would be killed during the war), the letters were never posted, and neither were they read by his family until later in the war. Author Wills says that, “contemporary personal accounts of the Battle of Britain of such frankness are extremely rare,” while individual narratives of this scale, “just do not exist,” making these letters from Myers to his family an incalculable insight from a witness to some of the most important moments in twentieth century history. They are also an extraordinary window into the mind of a man who had every reason to believe he’d never see his family again. An unvarnished, clear-headed and sometimes brutal portrayal of war, ‘Secret Letters’ is destined to become one of the books of the year.