The year 2020 is one that we will never forget, and it will certainly have an entry in future history books! But Covid – 19 isn’t the first virus to have a world-wide devastating effect. In this article I am going to look at previous pandemics and their impact on Swansea and Gower.

Swansea during the early 1300s was under the lordship of William de Braose. Just like today, there were major changes being made to Swansea during the 1300s. The townscape included the construction of the town’s walls and gates, the present location being near St. Mary’s church. A ditch had been dug on the northside of the town, our present-day High Street.

During 1332, Bishop Henry de Gower, had laid the foundation stone of the ‘new’ Hospital of St. David – on the site of the Cross Keys pub opposite St Mary’s Church. 16 years later, in 1348, Swansea was hit with the Black Death, the bubonic plague.

The Black Death is thought to have originated in Central or East Asia where it travelled along the Silk Route reaching Crimea in 1347. It was probably carried by flea infested rats that travelled on the merchant ships that brought goods in to the Italian Peninsula. From here the plague came into Wales via Southern England.

The population of Swansea at this time was hit badly by the Black Death outbreak. The plague eventually died out as it killed so many people – a worldwide estimate of up to 75-200 million deaths.

Despite the ravages of the Black Death, Swansea’s population did prosper, with the start of the coal industry.

The last major epidemic of the Black Death was the London Great Plague, from 1665-1666. Yet again, the disease was carried by rats, and it was estimated there were 100,000 deaths. It was an-other catastrophe that brought about an end to the epidemic – the Great Fire of London in 1666. 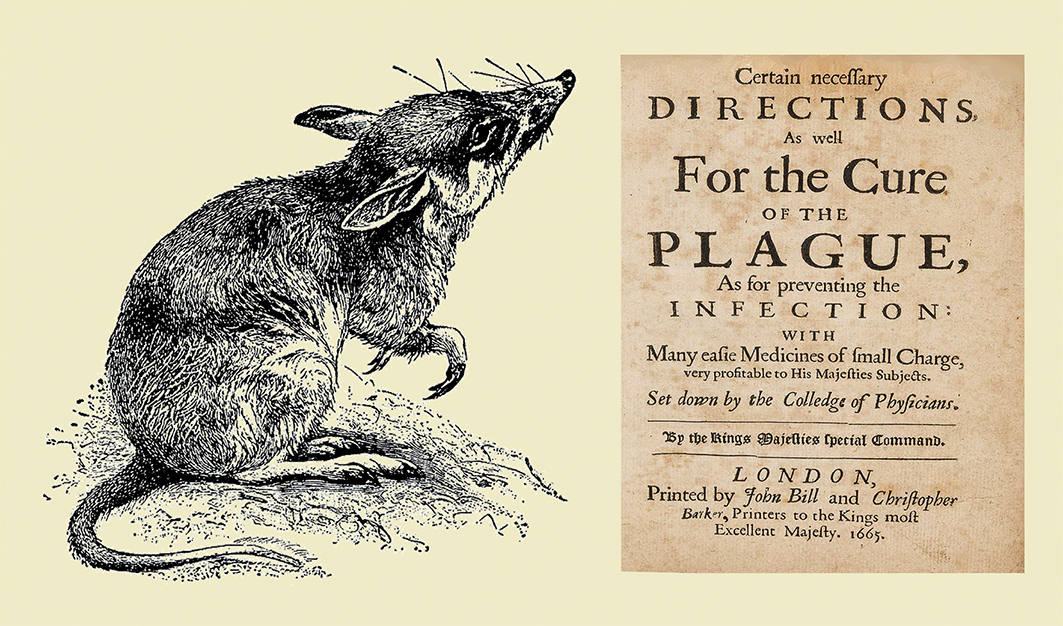 Just as we are instructed by the government today, the official advice printed in a pamphlet (left), advised Londoners of 1665, to avoid crowds, and also to quarantine. Some things never change.

It was in the port of Sunderland, in October 1831, that the first case of cholera was diagnosed. Cholera had been the scourge of the British Army, fighting in India, and it was thought that the English Channel would keep the disease at bay. The following year, the disease spread like wildfire, and sadly with the arrival of the Mary Ann, at Swansea Docks, with two of the crew suffering, it came to Swansea. 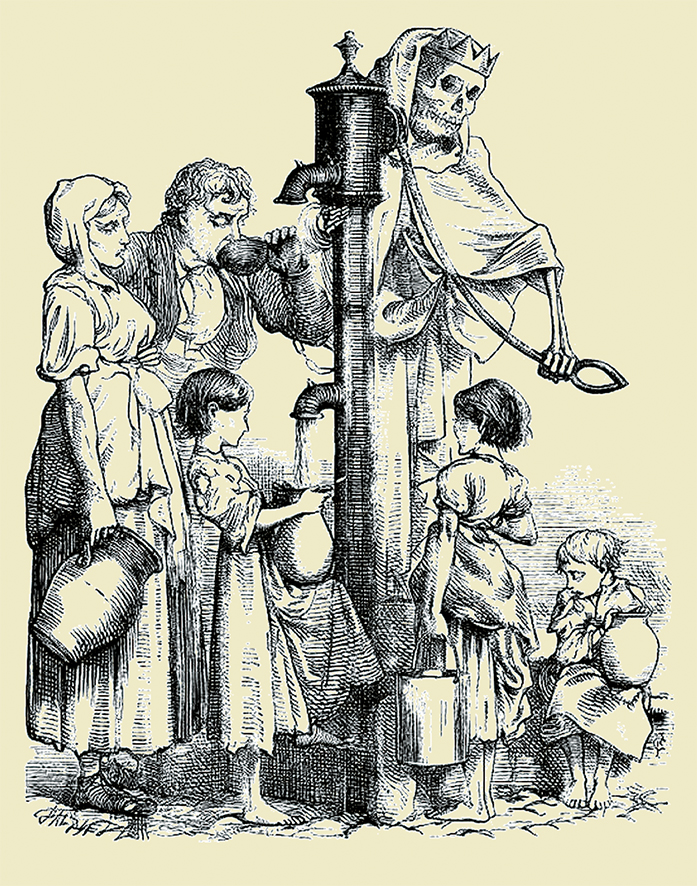 In the summer of 1849, the next Swansea Cholera outbreak occurred. By 1847 the Brynmill reservoir had been constructed, providing cleaner water to southern and low-lying parts of Swansea but did not reach the densely populated Greenhill area. The locals were forced to drink contaminated water which resulted in 150 deaths.

In 1850, the Swansea Local Board of Health was established; it was established to oversee the sanitation of public health within the Borough of Swansea, and the introduction of the sewage system during 1857.

By 1865, Swansea was the only place on mainland Britain to have had an epidemic of yellow fever. In mid – September the Hecla from Santiago de Cuba, Chile, arrived in the North Dock loaded with a cargo of copper ore.

The cargo was duly unloaded, along with the mosquitoes that carried the deadly disease. The weather was noted to have been very warm, which enabled the mosquitoes to survive. In the next 25 days, at least 27 people were infected and 15 of them died.

William Thomas who was unloading the ship, succumbed to Yellow Fever on the 29th September and was buried at St. Pauls, Sketty (right).

In 1866, there was another outbreak of Cholera affecting Swansea, Neath and Merthyr Tydfil. The number of those who died is thought to be around 2,500. Those who died in Swansea during this outbreak are buried in a common grave at St Matthews (middle, right), High Street. Today the grave is marked by paving slabs.

The Perch cocktail bar (below, right), 66 Wind Street was the residence of sailor WilliammCaldwell, 1892. Several Swansea men including Caldwell were the crew of the Swansea steamship Etna, 1893, ferrying Arab pilgrims across the sea. An outbreak of cholera broke out on board the ship, and a majority of the crew including Caldwell, lost their lives.

During the end of the 19th century, from 1889-1890 the first flu pandemic occurred, also known as the “Russian flu”. Initially reported in the city of Burhara, Uzbekistan during May 1889; by December the flu had arrived in London, having travelled via northern Europe. There is no reference to this flu in the Cambrian newspaper of the time, did it not arrive in Swansea? The Russian flu was the pre-cursor to the Spanish flu Pandemic, 1918-1920.

The Spanish Flu outbreak during February 1918 has its origins in one of two sources, either at the British army base at Etaples in northern France, or at Fort Riley, Kansas, USA. This is where a new army training camp Camp Funston was located. It was home to at least 50,000 serving soldiers and was where a case of flu was recorded in March 1918.

There were to be four waves of the virus. The first wave, which followed the first case and lasted the first quarter of 1918, was relatively mild. One of those who died during this period was David Evans (far left) the landlord of The Adelphi (left), in Wind Street. It was thought by August 1918, that the virus had been eradicated. It was the second wave which was more-deadly, lasting from October to December 1918.  Australia was hit for the first time in January 1919, during the start of the third wave, which lasted until June.

The UK was one of the main countries to be hardest hit by the last wave, however in the spring of 1920 the virus hit for a final time before dying out in the summer. Reverend John Richards, the pastor of Bebell Chapel– 1896 to 1920, was reported to have died as a result of the Spanish Flu, in 1920. 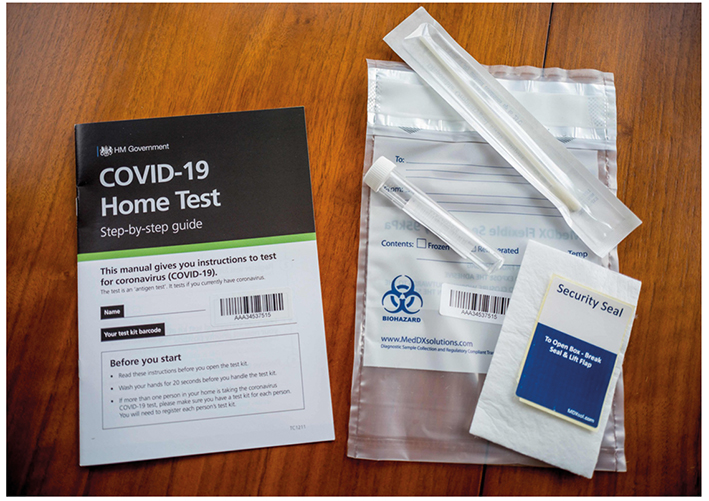 Before returning to Swansea I undertook a Covid test to make sure I wasn’t carrying the virus. It arrived via Amazon and comprised of a flat-pack cardboard box that had to be assembled to return the sample, a stick with which to take the sample, a small test-tube of preservative solution, two bags and a cloth. The box took for-ever to put together, as the holes did not match up with the adjacent tabs. As instructed, I used the sample stick to take a swab from the back of my throat – this made me gag – and with the same stick I had to swab the inside of my nose for 10 to 15 seconds. The stick then had to be placed in the test-tube – it didn’t fit so I had to break a bit off. The test-tube along with the cloth had to be placed in one of the bags, this then went into the second bag, then finally it had to be placed in the box. It was a tight fit!

Thankfully the result came back negative, and I could return home to Swansea before lock-down.

This year the National Service of Remembrance was held on 8th November 2020, at the Cenotaph, in Whitehall, London. The British Legion who organise the event, complied with the necessary social distancing measures. Sadly, the numbers of those who took part in the march past was lower.

Bay Magazine was contacted by reader Brian Morgan, who wanted to share the story of his grandfather, Evan Morgan, and great uncle, Llewellyn Morgan. 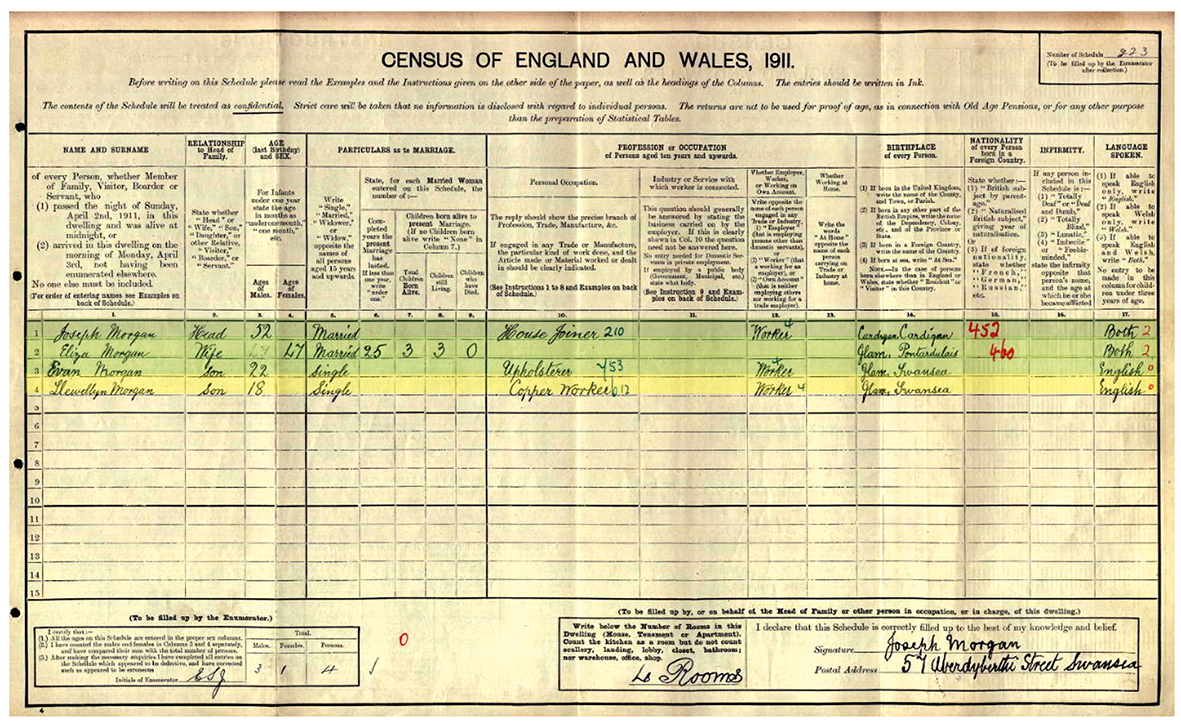 Brothers Evan and Llewellyn Morgan were the sons of house joiner, Joseph and Elizabeth Morgan. At the time of the 1911 Census (see above), the family were living at 57 Aberdyberthi Street, Swansea. Evan’s occupation was an upholsterer and Llewellyn’s a copper worker.

At the time of the outbreak of the First World War, the brothers enlisted in Oxford, having joined the Oxfordshire and Buckinghamshire Light Infantry, 7th Battalion.

The 7th Battalion was new, having been formed during that September 1914. They landed at Boulogne on 21 September and by early November, the battalion was ordered to Salonika (Greece) and landed there later that month.

Llewellyn’s Attestation Papers have survived, and it gives a good description of his appearance – 5ft 2½inches tall, 8.5 stone and of fresh complexion, with brown hair and eyes. Even though Llewellyn was deemed fit he was discharged for having bad eyes, and he survived the war. 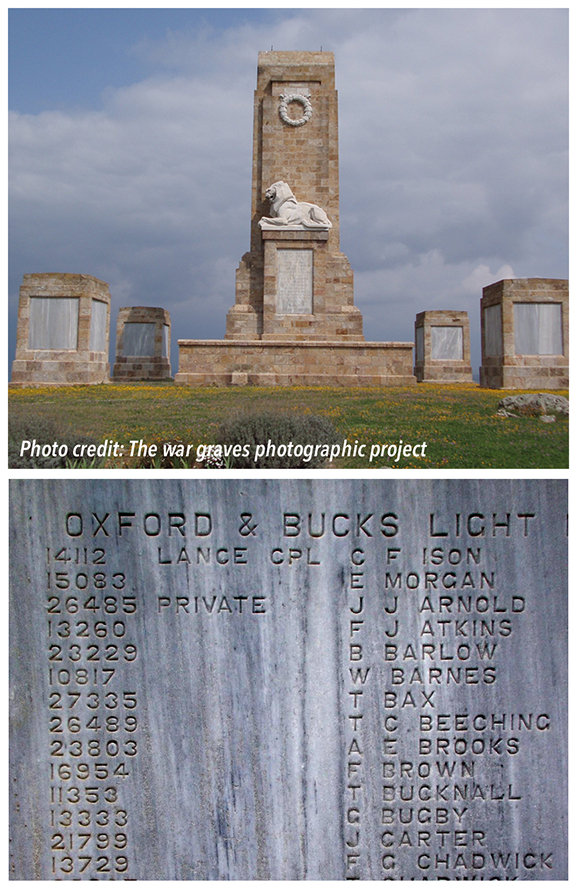 The 7th Battalion were in action on the last day of the Battle of Doiran, 9th May 1917. This battle was against the Bulgarians. It was during this action that over 100 soldiers of the 7th Battalion, including Lance Corporal Evan Morgan were killed in action. During the battle from 22nd April to the 9th May, the British casualties and losses numbered 12,000. The names of those who were killed are commemorated on the Doiran Memorial, Doirani, Greece (see pics right).

Evan had only been married to Helena Casey since September 1912 and they had one son, also named Evan Morgan, who was born in 1915.