To say that 2020 has been a terrible year for everyone involved with the live performance industry would be a huge understatement.

From our leading theatres to local am dram companies, the entire industry was forced to shut down en-masse for most of the year, with no idea when or where it might be safe to perform again.

In the case of Swansea’s own Fluellen Theatre Company, it’s been extra hard to stand by and watch on as highly anticipated productions which were all ready to go have now been put on hold until what looks like spring 2021.

Renowned for bringing the works of William Shakespeare to the Swansea stage, they include a new production of Much Ado About Nothing, as well as Robert Louis Stevenson’s Treasure Island and, pos-sibly most exciting of all, a world premiere from the man who discovered a certain young actor from Port Talbot called Richard Burton.

A few years ago, Fluellen staged Philip Burton’s long-lost play Granton Street. The sequel, entitled White Collar, continues the story of the Davies family three years afterwards, and the plan is to per-form both plays in repertory so that the audience will be able to follow the saga chronologically.

In the meantime, the theatre company have been keeping themselves busy by utilising the power of the internet in these socially-distanced times and have an ever-growing series of videos available to watch on the Fluellen Theatre YouTube channel.

There’s the Keeping the Lid On series, which are 10-minute dialogues from regular Lunchtime Theatre playwrights which artistic director Peter Richards describes as “a bit of fun”. Following each episode, the next writer in turn has to write another ten minutes, but with a 48 hour time limit.

Also coming up is a series of podcasts called Tales of The Strange. As Peter explains, “they are designed as Tales of the Unexpected-type stories, slightly chilling stories with a sting in the tail. The first one by Kate Bowman, Paying Their Dues, is already online and a second should be joining it very soon.” 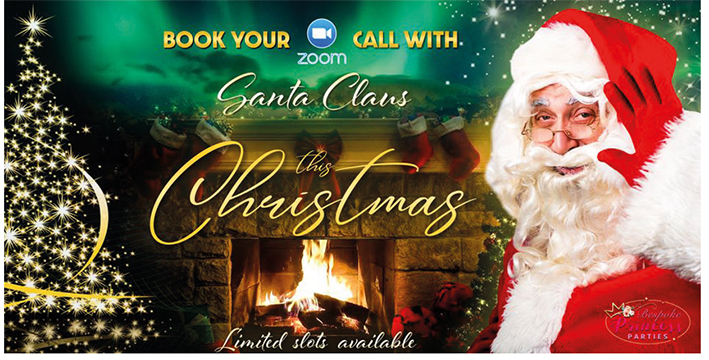 Finally, the Fluellen gang will be helping to spread a little cheer this festive season. In association with Bespoke Princess Parties, parents can treat their little ones to a 20-minute Zoom chat with Father Christmas himself, who will amaze them with just how much he knows about them! Mother Christmas might also make an appearance with a plate of mince pies.

All of which sounds like the perfect way to add some much-needed joy to what promises to be a rather different Christmas, and what we hope will be a much happier new year.

Fluellen can be found online at fluellentheatre.co.uk, and on YouTube by searching for Fluellen Theatre. To book an online chat with Father Christmas visit Bespoke Princess on Facebook.

After months – which felt like years – of being deprived entry into Swansea’s flagship art gallery, the doors of the Glynn Vivian are finally open once more. 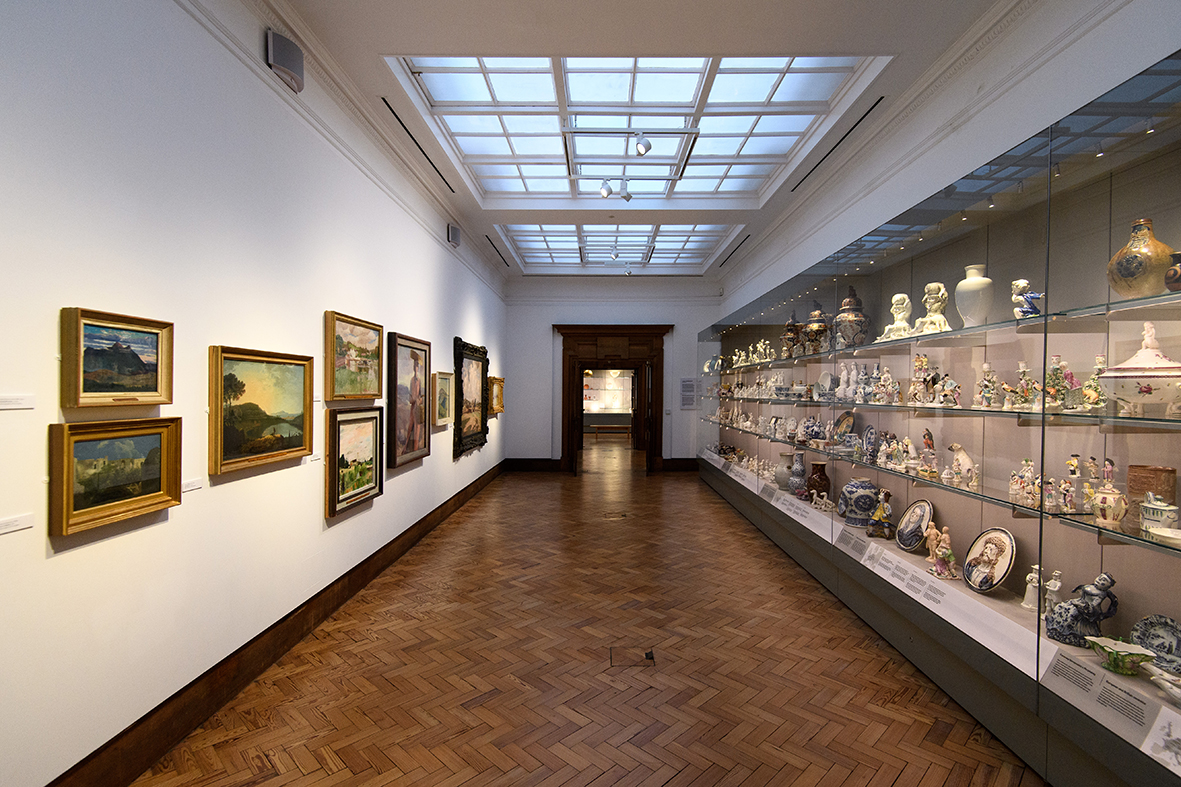 Absence makes the heart grow fonder, as the old proverb goes, and who would have imagined at the start of 2020 that we’d soon be living in a world where all of our long-standing cultural institutions, from the excellent collection at Swansea Museum to the seasonal panto at Swansea Grand Theatre, would be closed for business?

Fortunately, at least one of them is now able to welcome the public back inside, and as soon as I heard the good news I arranged to pop along for a tour. And while there are certain restrictions in place to keep us all safe, they in no way hinder the experience, and it really did feel the like catching up with an old friend.

Best of all, the Glynn Vivian has been stocked up with lots of new exhibitions since we were last able to step inside, and the sheer volume of works on display came as something of a sur-prise on my first visit. And if you’ve yet to visit the gallery since it began welcoming the public back inside, then you’re in for an even bigger surprise because, while I found it packed with four new exhibitions, as I write these words there will be no fewer than six – SIX! – exhibi-tions to explore through most of December and into the new year.

It just goes to show that, while the rest of us were denied entry, those working behind the scenes were keeping themselves very busy during the last seven months or so.

If that wasn’t enough, there is also a very welcome selection of “greatest hits” back on display which can be found dotted throughout. They include old favourites from some of Swansea’s best-loved artists like Evan Walters and Alfred Janes, Wales’ pioneering landscape painters Richard Wilson and Thomas Jones, more modern-day Welsh trailblazers like Gwen John and Shani Rhys James, and some big international names such as the French Impressionists Claude Monet and Lucien Pissarro.

Anyone thinking of visiting is advised to book a ticket in advance as only a limited number of people are allowed entry at one time. Once inside, you will have to follow a one-way system which should be familiar to anyone who has visited a supermarket recently and walked in the direction pointed out by the arrows on the floor.

This one-way tour begins in the atrium, and that is where the first new exhibition can be found…

WHAT’S ON AT THE GLYNN VIVIAN: 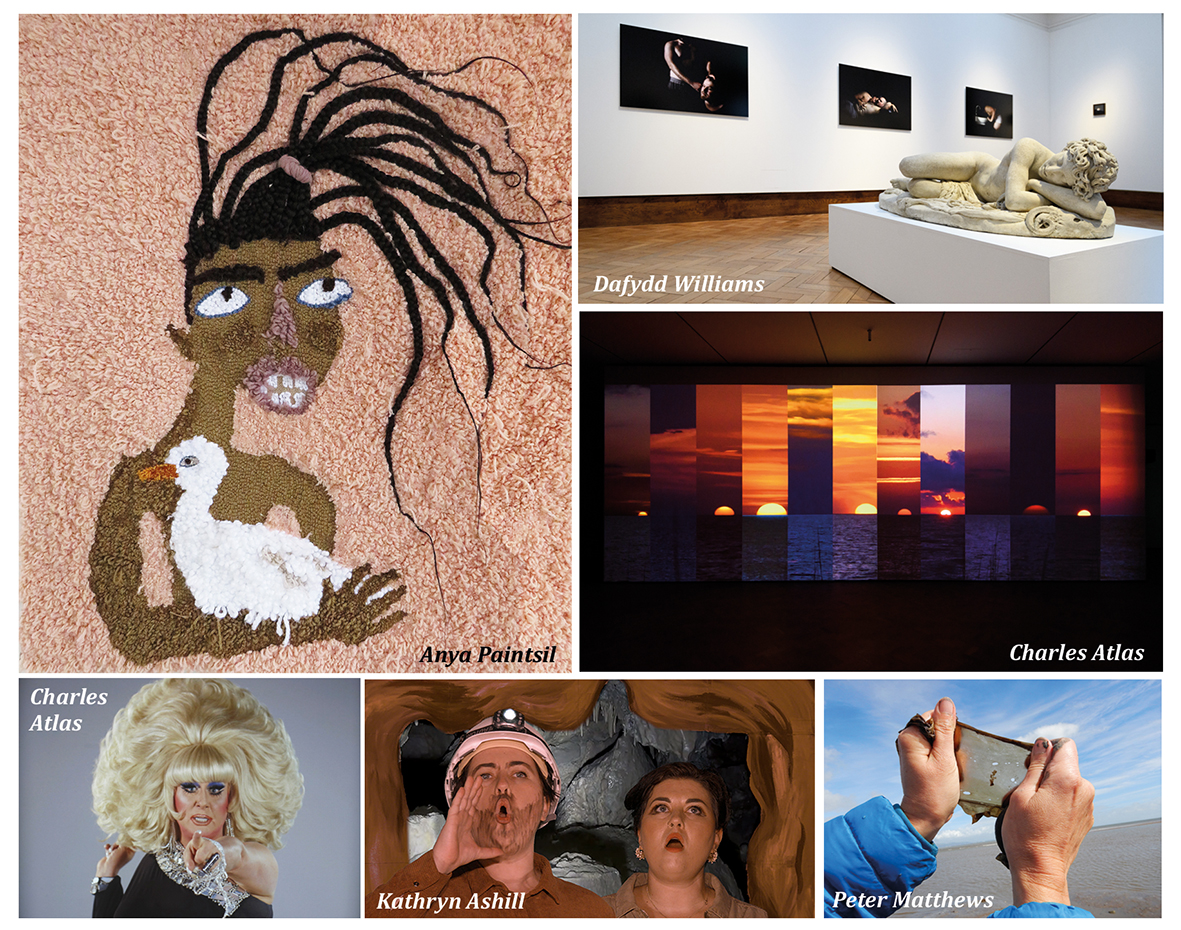 Charles Atlas: The Tyranny of Consciousness – Until 28 February 2021

The work of pioneering filmmaker and video artist Charles Atlas has brought together dance, performance, and media for nearly four decades. The Tyranny of Consciousness (2017) consists of a five-channel installation with a mosaic of 44 different sunsets over water happening at once, accompanied by a separate screen bearing an 18-minute countdown to darkness. It is accompanied by the voice of legendary New York drag queen Lady Bunny, who talks about peace, life together, and how, when it comes to US politics, “the right questions are never being asked.”

Swansea-based Dafydd Williams’ work can be seen alongside works from the gallery’s own collection. Malum (from the Latin word for both “apple” and “evil”) pays particular focus on the work of artists Michelangelo and Caravaggio. The work attempts to “highlight the nonsensical argument that homosexuality is a ‘modern phenomenon’ and to reconsider its absence from the canon of Western Art history.”

The annual award is given to a Welsh artist whose work is purchased for the Glynn Vivian Art Gallery’s Permanent Collection. This year’s selector is artist and curator Kathryn Campbell Dodd, who has chosen the work of Anya Paintsil, a Welsh and Ghanaian artist working primarily with textiles. From rug hooking to embroidery, her assemblages evoke tactile tapestry on the one hand, and constitute semi-sculptural interventions on the other.

In August, the Glynn Vivian invited people of any age and location to send an A5 postcard to the gallery. There was no fixed theme, other than imagining what the future might look like, and they received hundreds in reply from as far afield as China. The mediums received include drawings, paintings, photography, poetry and collage, and will serve as a permanent reminder of the events of 2020.

The Glynn Vivian teamed up with Swansea University’s Cultural Institute for the inaugural Creativity Fellowships, which were designed to give artists of any discipline the opportunity to create new work inspired by a piece of academic research. One of them was Peter Matthews, “an artist whose work and methodology immediately seemed to speak to the interests and concerns of marine biologist Dr. Ruth Callaway’s study of coastal environments. Here were two people, an artist and a scientist, both of whom had spent years immersed in observing, experiencing and thinking about coastal landscapes.”

Fools Gold by Swansea-born Kathryn Ashill is the artist’s first exhibition in a public art gallery. The result of the Sir Leslie Joseph Young Artist Award, administered by the Friends of Glynn Vivian, the biennial award is open to young artists throughout the UK who have undertaken part of their education in Wales, and offers an opportunity to have their first solo exhibition in a public gallery. The video installation explores her paternal history, moving between an autobiographical narrative and the history of the Sun King Louis XIV.

The Glynn Vivian Art Gallery is open Wednesday – Sunday, 11.00am – 3.30pm, with last entry at 2.40pm. Only six people are being allowed into the gallery every 20 minutes to ensure social distancing rules are followed. Tickets should be booked in advance before visiting, online at: www.glynnvivian.co.uk or by phoning 01792 516900.