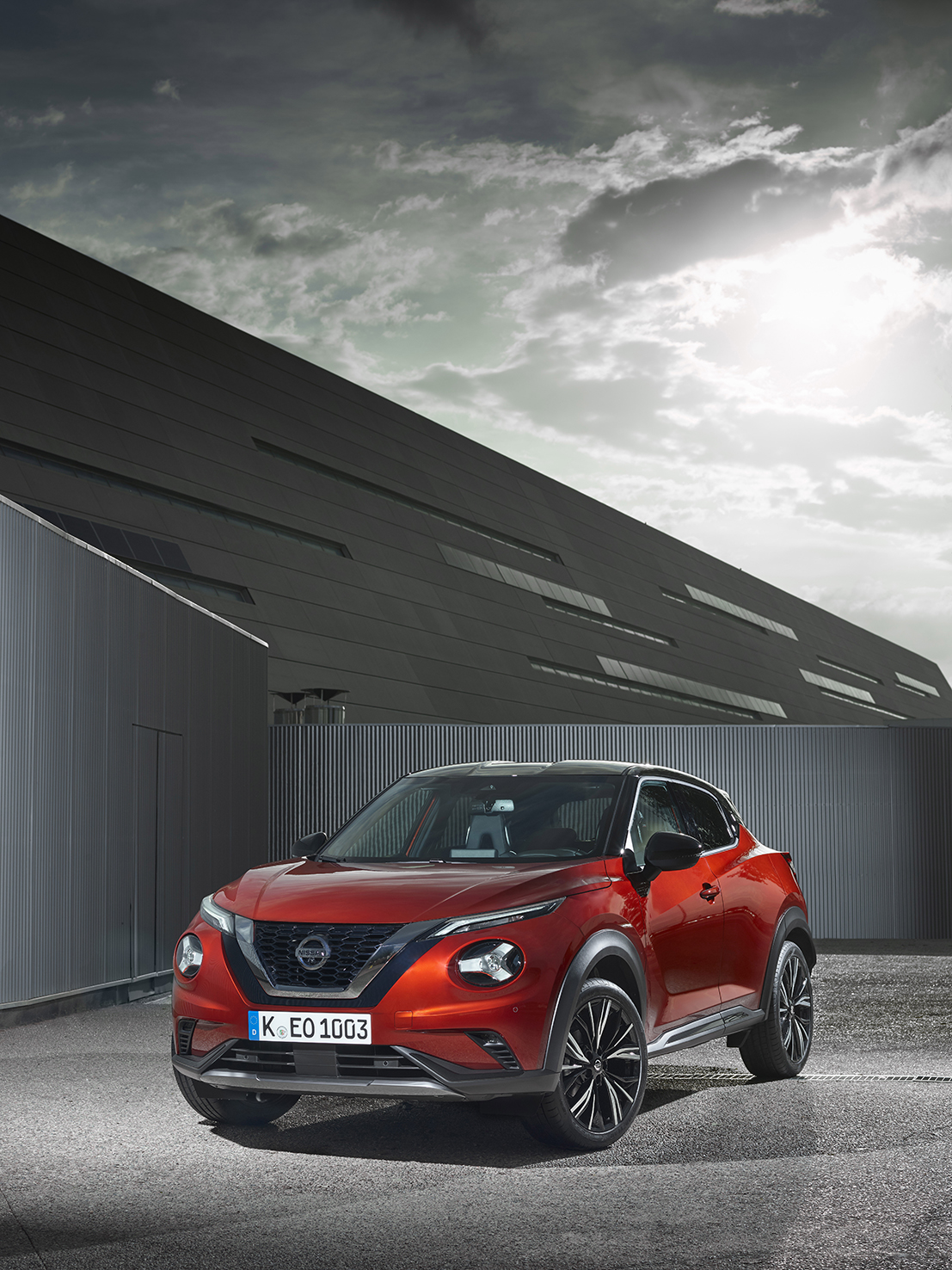 I can’t find my notes from when I drove the previous generation Nissan Juke, neither can I find a copy of my review of it anywhere – presumably it was printed in what is now a long-defunct title. I do seem to remember though, that in 1.5 petrol form, I thought the Juke was quite thirsty. I wasn’t particularly convinced about its styling either; a centre console designed to look like a motorcycle’s petrol tank, what was that all about? Overall, I recall, the original Juke left me somewhat nonplussed.

That just goes to show what I know. The Juke quickly became Nissan’s best-seller. Rival manufacturers clamoured to make their own similar-sized SUV offerings and all too quickly the likes of Kia’s Soul, SEAT’s Arona, FIAT’s 500X, Renault’s Captur, Ford’s Ecosport – and that’s just to name a few, filled our High Streets; simultaneously they were being labelled Juke rivals.

Now, nine years after we all struggled to work out quite what it was that Nissan’s stylists had been taking with their tea, and SUVs of all shapes and sizes are very much the norm, there’s a new Juke.

It’s bigger – as anyone who ever spent more than a few minutes in the rear of the old one will no doubt be very glad to hear – and it’s lighter too. Nevertheless (and even I think that new grille makes it look a bit like the bigger Qashqai) the new Juke is still instantly recognisable.

The angular, heavy creased styling that so defined the Juke is still very much in evidence, the big bug-eyed circular lamps are still a distinctive feature too – now though they contain Y–shaped LED daytime driving lamps. They’ve hidden the rear door handles in the C-pillars – so it looks funkier and a bit more like a three-door, rather than another mumsy school-run SUV, and the wheel arches have been clad in black plastic to help fend off any nasty, no doubt family orientated, knocks. Pick a high-spec Juke, such as the fully loaded Tekna, Nissan were kind enough to lend me, and you get 19-inch alloys, and the opportunity to have the roof in a different colour to the rest of the body – how very stylish!

What you don’t get, or for a little while at least, is a choice of engines. Rakish looks and low–profile tyres aside, the Juke’s power – a modest 117bhp of it comes from a 999cc, three cylinder turbo-charged petrol engine, that’s coupled to either a six-speed manual or a seven-speed DCT auto. Our car came with the latter.

It’s a cliché perhaps to say that it punches harder than its weight, but Nissan’s little three pot motor does indeed feel bigger than it is. It sounds good too, thrumming nicely when required to work for its living and remaining nicely quiet when just ambling along. If anything, the engine is the Juke’s standout feature. The ride on the other hand…

If you’re considering buying a Juke then make sure you carefully consider what size wheels it comes with. Lesser specced Jukes get 17 inch rims, which with the benefit of hindsight, might be the ones to go for. The 19-inch rims fitted to Nissan’s Press fleet Tekna specced Juke, although no doubt both fashionable and desirable, make the Juke feel jittery and unsettled on all but the smoothest of surfaces, they do little to suppress road noise levels inside the cabin too. Sometimes, I guess, less is more. 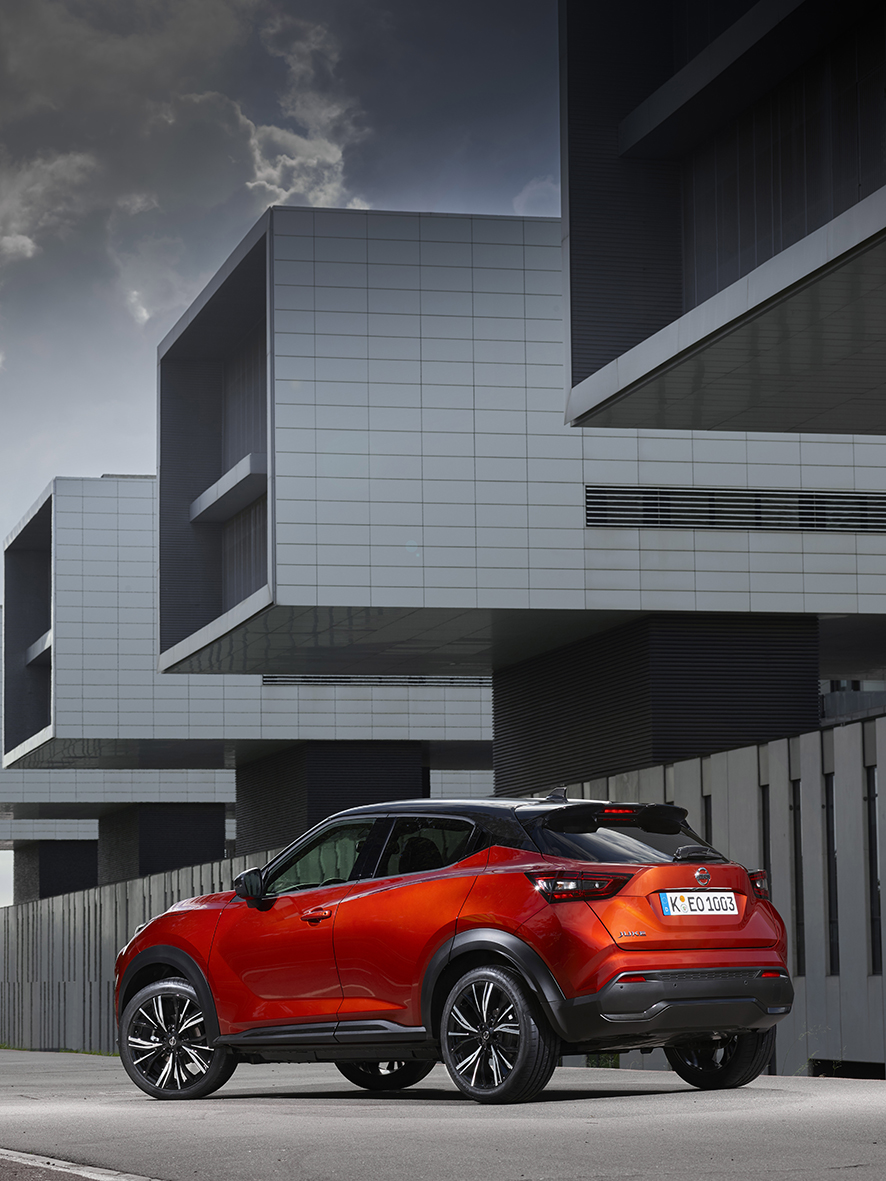 The interior too is mix of good and bad. The dials are brilliantly clear, the seats supportive, and the touchscreen takes care of nearly everything you could ask of it and then some; trip computer, door locking and unlocking, lights, status check, sending destinations to your phone, you name it… and should your budget stretch to such things, the Bose stereo is also rather marvelous, literally turning Nissan’s little crossover into a mobile jukebox (Get it?). It’s just a shame that Nissan chose to wrap everything up in a variety of hard and scratchy plastic. Still, at least the dash and door panels can be had in some bright colour schemes should you be tired of the all-black look.

And what about the way it drives?

Well, it’s OK… in fact, it drives pretty-much like a supermini – which is not surprising when you consider that underneath it all lies the same floor-pan as Renault’s Clio. Safe, secure, and predictable – if not exactly exciting – is the order of the day.

And that I suspect will suit most Juke customers very well indeed. Style will be what sells the Juke, rather than any dynamic prowess, or indeed, the desire for it.

The original Juke really was the trendsetter. Quite whether this new one will create such a stir, I really wouldn’t like to predict – especially so now when there are so many alternatives that simply weren’t available first time around.

It’s still far from perfect but, what I am sure of is that the new Nissan Juke is a far better car, in every respect, than the one it replaces.

Many thanks to Julie at Nissan’ UK press office for the loan of the Juke.