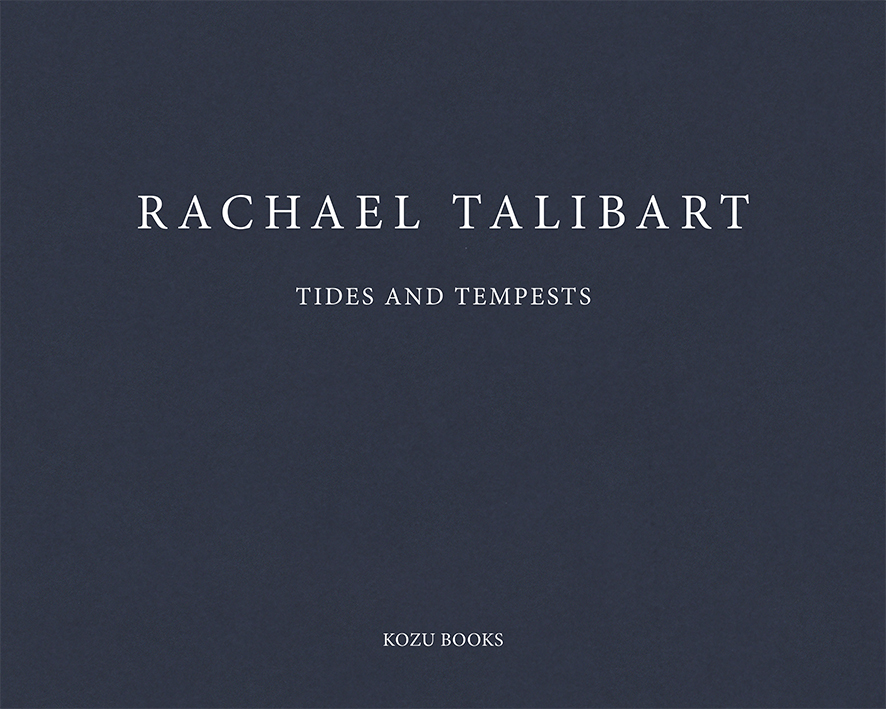 This month we take a fresh look at the seashore with photographer Rachael Talibart, learn pretty much everything there is to know about hedgehogs, find out what’s wrong with the internet, visit the unknown island of Madagascar, and take a crash course in espionage. 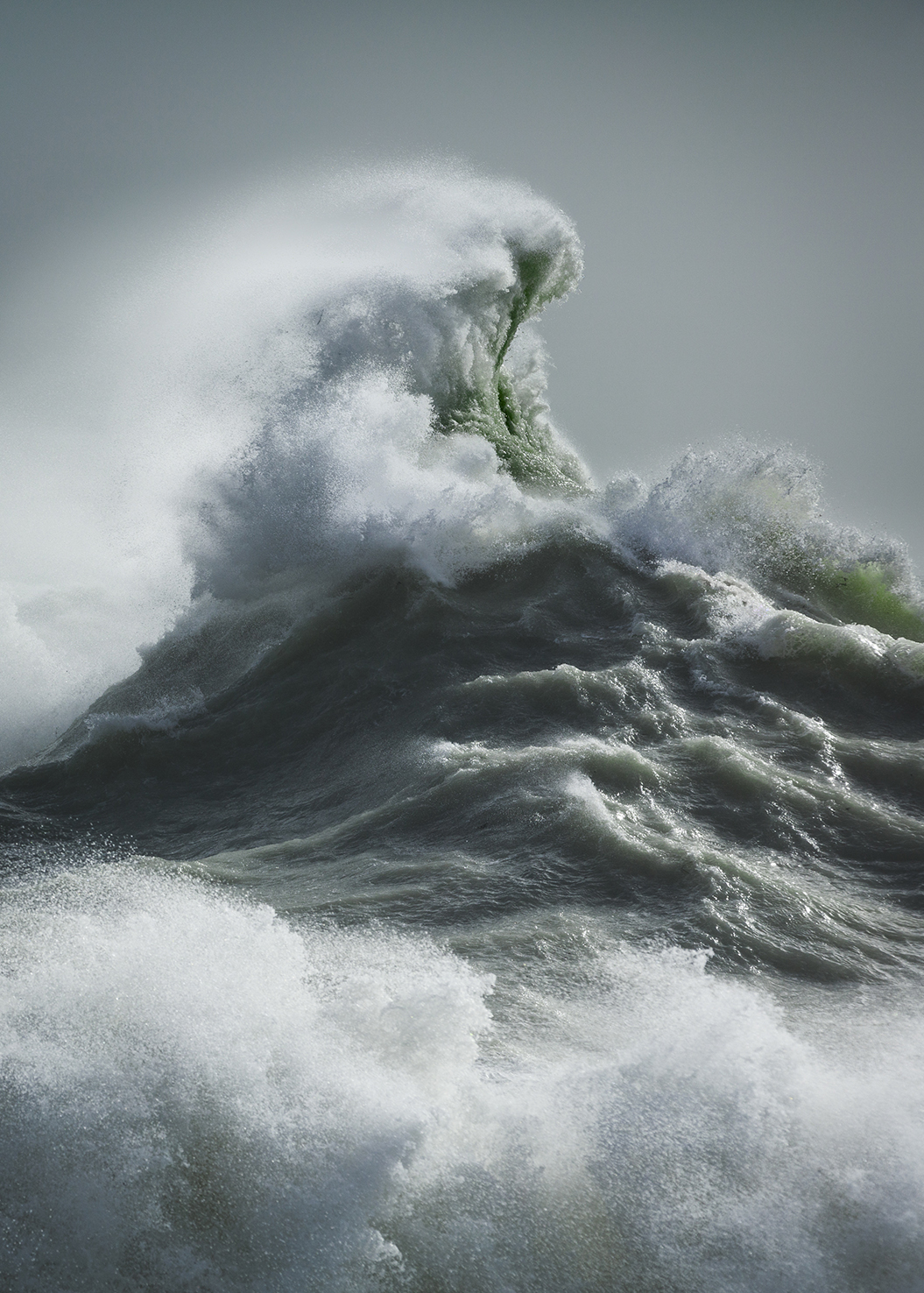 Well, we simply couldn’t find a better book to start of 2021 than photographer Rachael Talibart’s truly won-derful Tides and Tempests. Here in Swansea, we take our coastline seriously, and since none of us is ever far from the ocean blue, the rhythms of the tides and accompanying (end-less) storms are threads woven into the fabric of our daily routine. Over the seasons we get used to the sea’s many moods, while our beloved bay forms an ever-changing picturesque backdrop as we go about our business. And yet probably hardly any of us would think to photograph it. After all, what’s to photograph? It’s only the sea after all.

Talibart would disagree sharply. And while she hasn’t (so far as we can tell) spent much time on the South Wales coast with her camera, with Tides and Tempests she scouts the four locations of Sussex, the Outer Hebrides, Oregon and Portugal in search of her ocean imagery. The result is that she comes up with the goods time and time again in a collection that will leave the reader breathless. Perhaps ‘reader’ is the wrong term here because there are hardly any words in the book – Talibart, it seems, is happy to let her pictures speak for themselves. 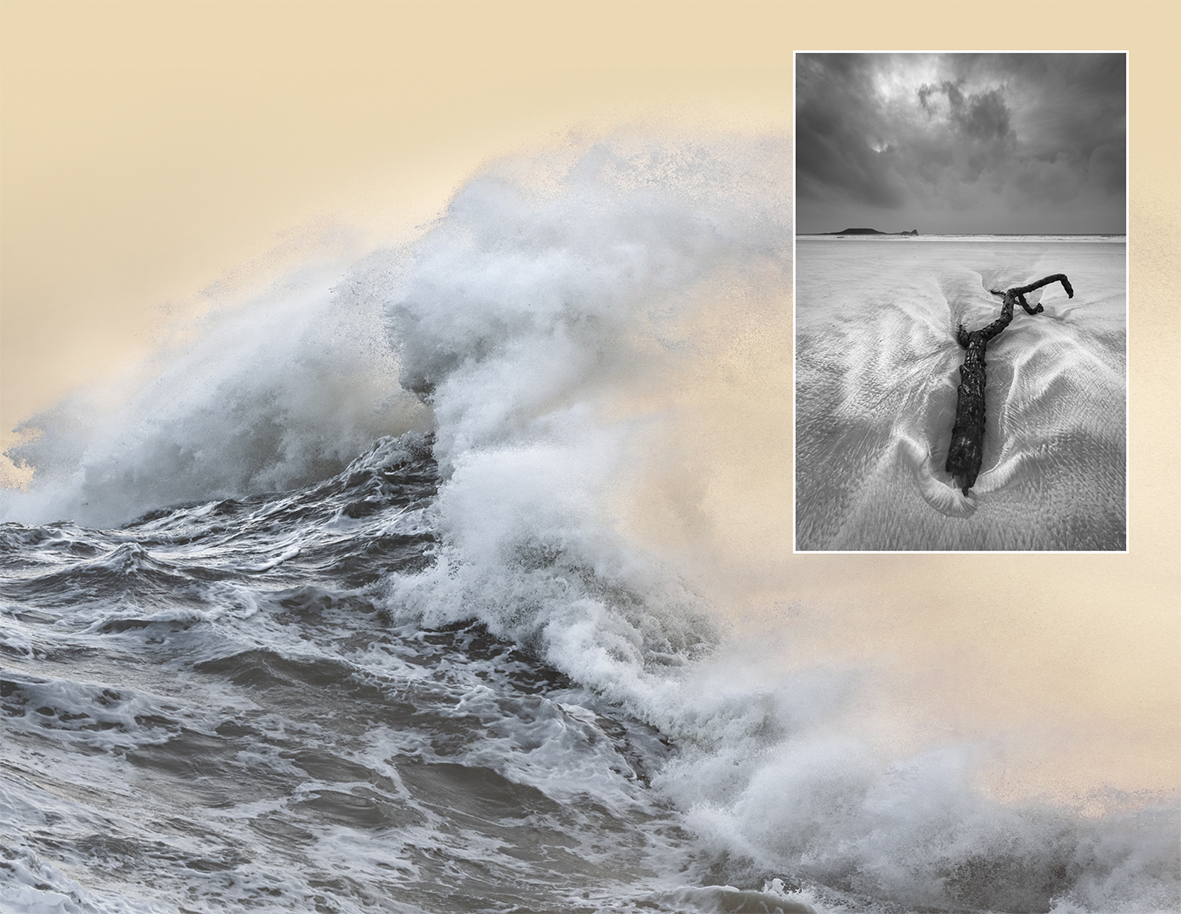 The quality of her imagery is of a standard that is rapidly propelling Talibart into the upper echelons of professional landscape photography, gaining a well-deserved reputation as one of the finest sea photo-graphers around. But for those of us who perhaps care more about the sea itself than the finer points of the artistry that go into her work, what we have is a good old-fashioned coffee table tome of such mari-time drama that you’ll be glad that the dog is snoring by the fire, so you stay indoors a little longer with her book rather than venturing outside.

Talibart’s view of the coast ranges from a moody grey and blue palette with the occasional brilliant white highlight, to a more friendly pastel aquamarine and pale yellow. There are long exposures where the action is all of a blur, side by side with razor sharp shots measured in thousandths of a second in which the water is presented drop by drop. A masterpiece from the first page to the last, if you love the sea, you’ll love Tides and Tempests. 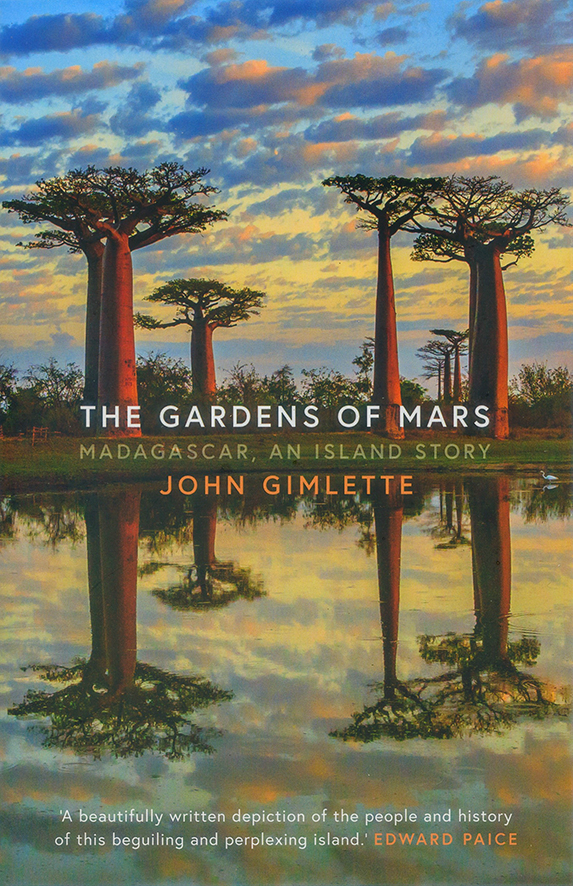 It’s the world’s fourth largest island but, unless you’re either a fellow of the Royal Geographical Society or a fan of Dreamworks’ animated movies, it’s seriously unlikely you’ll know anything about it other than the name. Madagascar, as author John Gimlette tells us, is not just an unknown world but an improbable world too: one that he sets out to explore and explain in his superb ‘The Gardens of Mars’. For somewhere we know next to nothing about, Madagascar is enormous. If you could plonk it onto a map of a part of the world we’re more familiar with, it would stretch from the UK to North Africa, and yet, in one of the first of many jaw-dropping revelations we are treated to, its road network is about the same size as tiny Jamaica’s.

Despite which, our intrepid author has covered every square inch of Madagascar to produce perhaps the only modern book of its kind ever written about the place. To call ‘The Gardens of Mars’ a travel book is to damn it with faint praise because, although its sense of purpose is on the surface to reveal the mysteries of a place we’ve never been to, it is also a feat of journalism, observation and determination. To bring us his account of modern Madagascar, Gimlette has had to become something of a forensic historian, digging into the past to make sense of his riotous cast of characters that includes sorcerers, lepers and descendants of 17th century pirates. Beautifully illustrated throughout with both archive images and photos by the author’s own hand, ‘The Gardens of Mars’ is destined to scoop whatever travel book awards are still in existence these days. 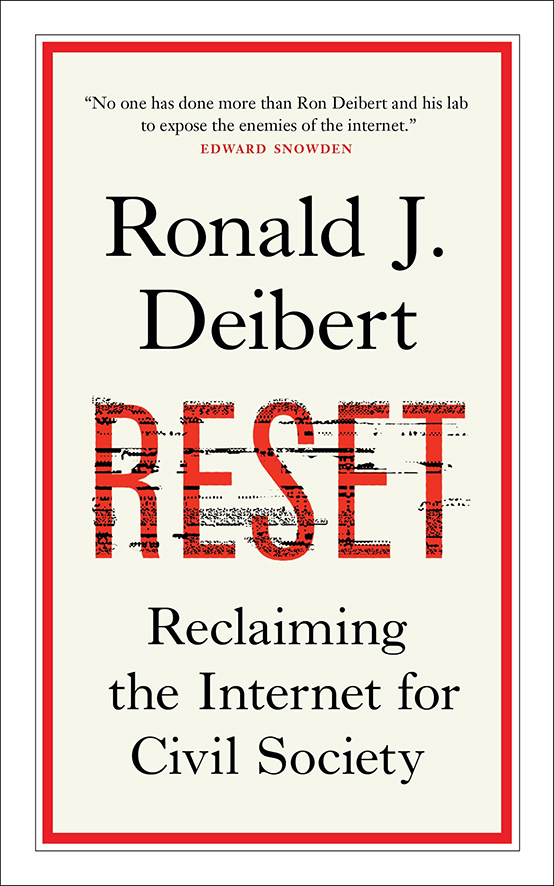 For all the people out there who think the digital world has gone too far in taking over just about everything, who are fed up with faceless tech giants delving into our private lives, then there is some good news. Technology and security expert, founder of internet watchdog Citizen Lab, Ronald J Deibert agrees with you. If you were to sum up his new book in one sentence it would be this: enough’s enough, somebody hit the total reset button now. ‘Reset’ draws on the author’s experience gained in two decades of working in the digital landscape to expose the disturbing repercussions of the internet on politics, the economy, the environment and humanity itself. He sees today’s mushrooming digital comms network as a zone where accountability is weak and security concerns are endemic, creating disturbing opportunities for exploitation. In ‘Reset’ Deibert analyses the unregulated surveillance industry, innovations in technologies of remote control, superpower policing strategies, ‘dark’ PR firms and the ‘hack-for-hire’ services that feed off rivers of poorly secured personal data. What he is advocating is reclaiming the internet for civil society (which is actually the book’s sub-title) so that we don’t have to live with all this prying, spying, unrestrained illegal behaviour, black market racketeering and the sheer anonymous rudeness and lack of responsibility of social media. And as if that’s not enough, there’s also the colossal impact of consumer electronics on the environment to consider. What could have been a rant, ‘Reset’ is a remarkably balanced and informative expert insight into today’s digital wild frontier. 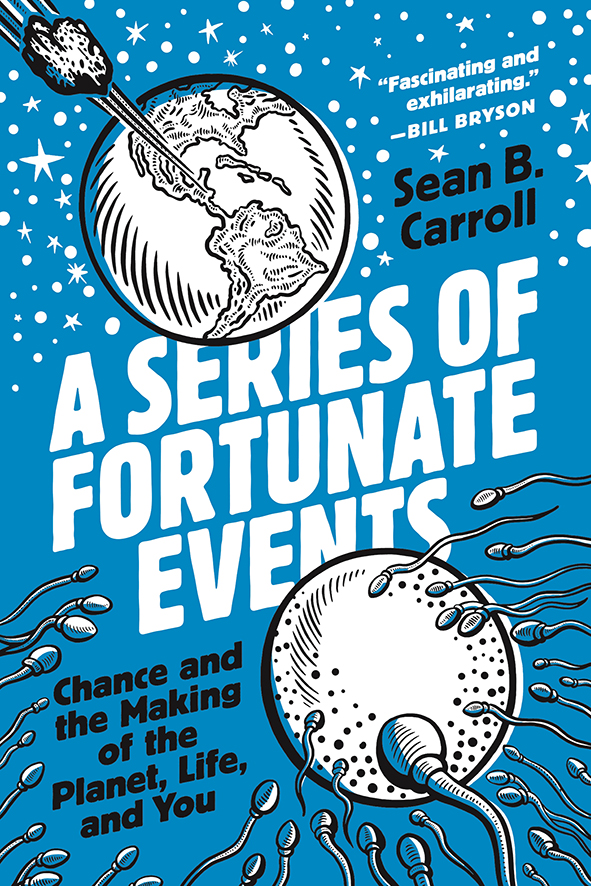 ‘A Series of Fortunate Events’ by Sean B Carroll, Princeton University Press, £18.99, hb

Humans have a complex relationship with chance, says Sean B Carroll in his latest book of popular science ‘A Series of Fortunate Events’, in which he sets about deconstructing what the phenomenon really is. Why should it be when we lose a bet it’s down to bad luck, but when we win, this gets chalked up to an altogether different interpretation, such as statistical inevitability, the robustness of our strategy or even ‘fortunate events.’ The main barrier to humans wrapping their heads around how chance works, he maintains, is that brain biology has set our minds to think that everything happens for a reason. But Carroll reminds us, as the comedian said after randomly throwing a stranger down the stairs: “tell me why I did that.”

The scientific truth is that our lives are largely driven by chance and we’ve just got to get over it. This is, by the author’s cheerful admission, a ‘really big idea’ to cover in a relatively small book, especially when such ideas seem to meet with mixed fortunes when it comes to public reaction. Darwin’s theory of evolution he contends, is still challenged the world over despite there being masses of incontrovertible evidence literally surrounding us. Meanwhile, Einstein’s theory of relativity is taken as an article of faith, despite so few of us being capable of understanding it. What Carroll does is to give chance a second chance. But you’d do well to remember that “chance continues to reign every day over the razor-thin line between our life and death.” Entertaining and informative, Carroll’s latest is a real eye-opener. 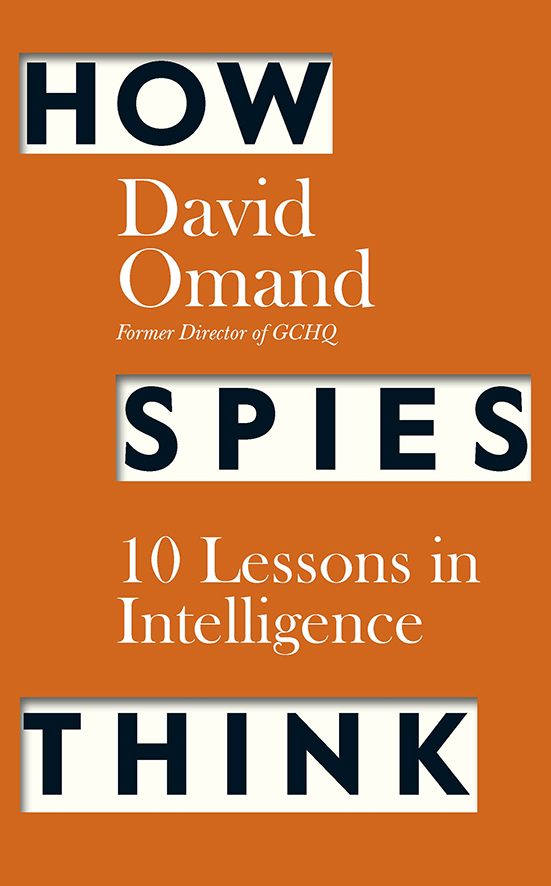 Imagine what it would be like if you could make all your important life decisions using the same approach as spies do. We’re not talking about the fictionalised and in most cases highly inaccurate world of the likes of James Bond, but the operatives who quietly work away in the background protecting the nation and its citizens. That’s what spies really do, says former director of GCHQ David Omand.

Intelligence officers discern truth, he says in ‘How Spies Think’. They gather inform-ation – often contradictory or incomplete – and with it, they build the most accurate picture of the world that they can. Then they decide what to do.

Perhaps it would have been better if the book had been called: ‘how to gather data in the way intelligence officers do and then apply it to critical decisions in your own life’… Maybe not as catchy, but that’s what the book is about. In real life too, just like intelligence officers, we are faced with information – again, often contradictory or incomplete. As we gather news, trying to work out what’s fake and what’s not, we too are constructing an image of the world and making decisions about it. Basically, we’re doing the same thing: we just need to know how to apply the technique properly. Using the data analysis framework adopted by British intelligence personnel we can make better decisions, so that we can think clearly amid an onslaught of confused data coming at us at a million miles an hour. Gripping stuff. 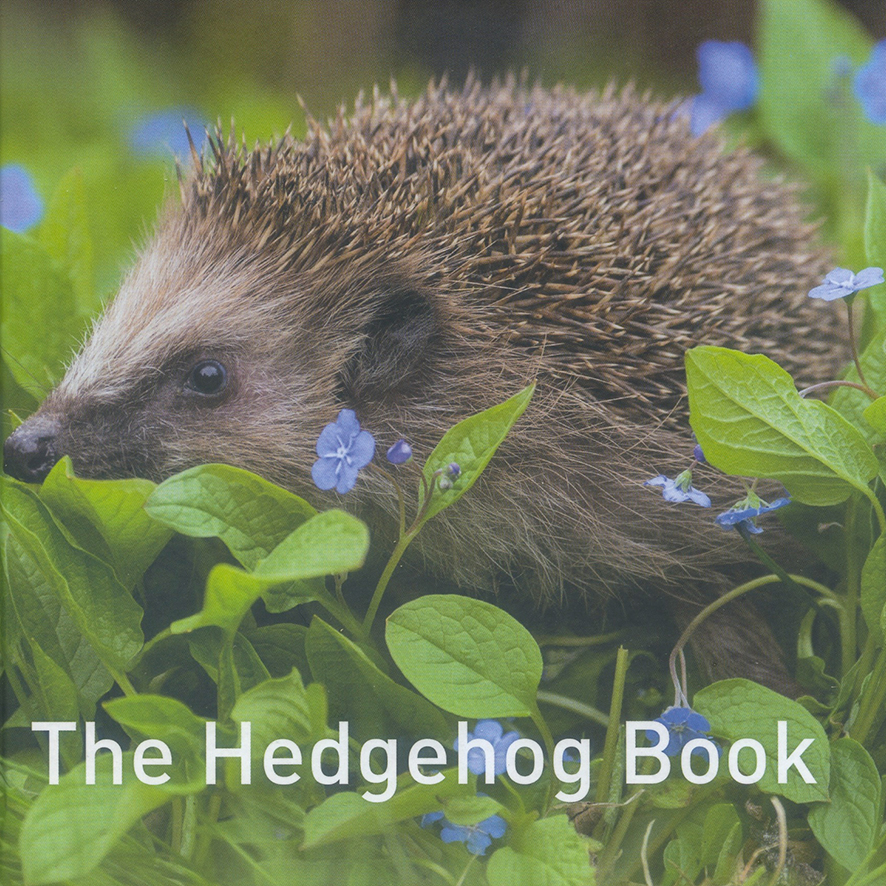 Although we can’t be sure of the exact figures, hedgehogs in Britain are in steep decline. Since the dawn of the 21st century their number has gone down by a third in urban areas and by as much as half in the countryside. This would be a matter for alarm in any species, but given that the hedgehog is our only spiny mammal – and as such unique in the UK’s animal kingdom – it borders on a tragedy. So, we should thank goodness we have ecologist and author Hugh Warwick tirelessly campaigning on behalf of Mrs Tiggy-Winkle, Spiny Norman, Mr Pricklepants and all their chums. Not only is Warwick a spokesman for the British Hedgehog Preservation Society, but also, as readers of Graffeg’s lovely new Hedgehog Book will come to suspect, a borderline obsessive on the subject. And none the worse for that, because without people like Warwick going into bat for our precious wildlife heritage, Britain’s hedgerows would be in even more jeopardy than they are currently.

Once you get past the inevitably cute photography – hedgehogs can’t help being so photogenic and easily anthropomorphised – The Hedgehog Book is serious and encyclopaedic, combining Warwick’s expertise on the topic with his obvious talents for communicating it. It’s also stuffed with brilliant facts. My favourite is that one of the original names for the hedgehog was ‘urchin’, leading to the irresistible conclusion that the echinoderms that we find in our local rockpools were informally named ‘sea urchins’ because of their aquatic resemblance to their (unrelated) cousins on dry land. Superb.