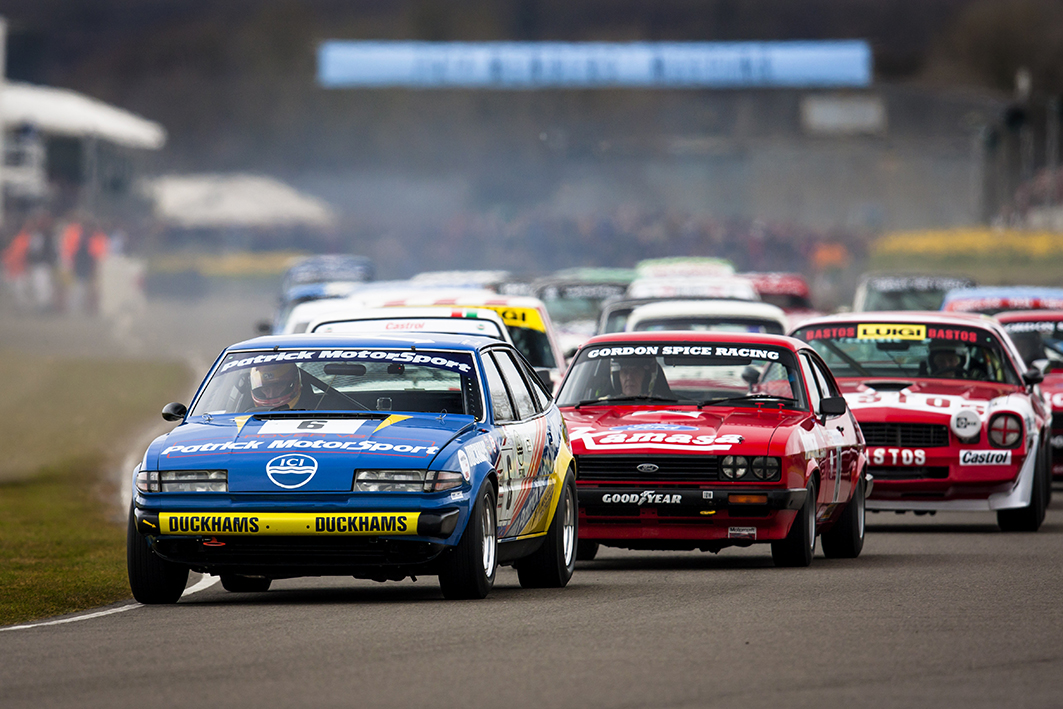 Goodwood can confirm that the 78th Members’ Meeting will now take place on 16-17 October 2021, moving from its originally scheduled date in May. The decision has been made following the announcement by the Government on Monday 22 February and its roadmap to ease restrictions over the coming months, which rendered the original date impossible.

The Members’ Meeting is an action-packed weekend of motor racing exclusively for members and fellows of the Goodwood Road Racing Club (GRRC) and their guests, recapturing the intimacy and camaraderie of the members-only race weekends held in Goodwood’s heyday. Normally the curtain raiser for the historic racing season, this year it will be a triumphant finale.

Places are available in the Fellowship, which offers motorsport fans the chance to buy tickets to this unique event as well as a host of other year-round digital and in-person benefits from Goodwood and its partners. Members’ Meeting customers who can no longer attend the new date in October should contact Goodwood’s Ticket Office on 01243 755055.

The Duke of Richmond said: “We welcome the roadmap from the Government on Monday, and whilst we’re disappointed that we won’t be able to host the 78th Members’ Meeting in May, we’re pleased that we can safely reschedule it to later in the year. We want to thank our GRRC members and fellows, competitors, partners, suppliers and fans for their continued support, patience and passion to bring the event to life. We can’t wait to welcome our guests back later in the year.”

The weekend will be packed with crowd-pleasing action, including popular races like the S.F. Edge Trophy for Edwardian leviathans, and the Gerry Marshall Trophy for Group 1 touring cars of the 1970s and early ’80s, as part of an unchanged race line-up.

The rally sprint will also go ahead as planned, and promises to be even more dramatic thanks to the earlier darkness in October, which means the cars and drivers will face a full night stage. Additional special demonstrations, along with star cars and drivers, will be announced in the coming months.

The Saturday evening will be more special than ever with the day’s activities climaxing with unmissable entertainment and food, along with the incredible firework display and the cordial atmosphere that brings together the GRRC community.

Notwithstanding the universal hope that limits on social contact will come to an end on 21 June, Goodwood continues to work closely with Public Health England and UK Government advisory groups. All the events will be run strictly in accordance with the Government’s Covid-19 guidelines on social distancing in place at the time – which after 21 June will hopefully be minimal. Goodwood’s number one priority is the safety and wellbeing of everyone involved, whether working behind-the-scenes, at the wheel, or attending the spectacle. 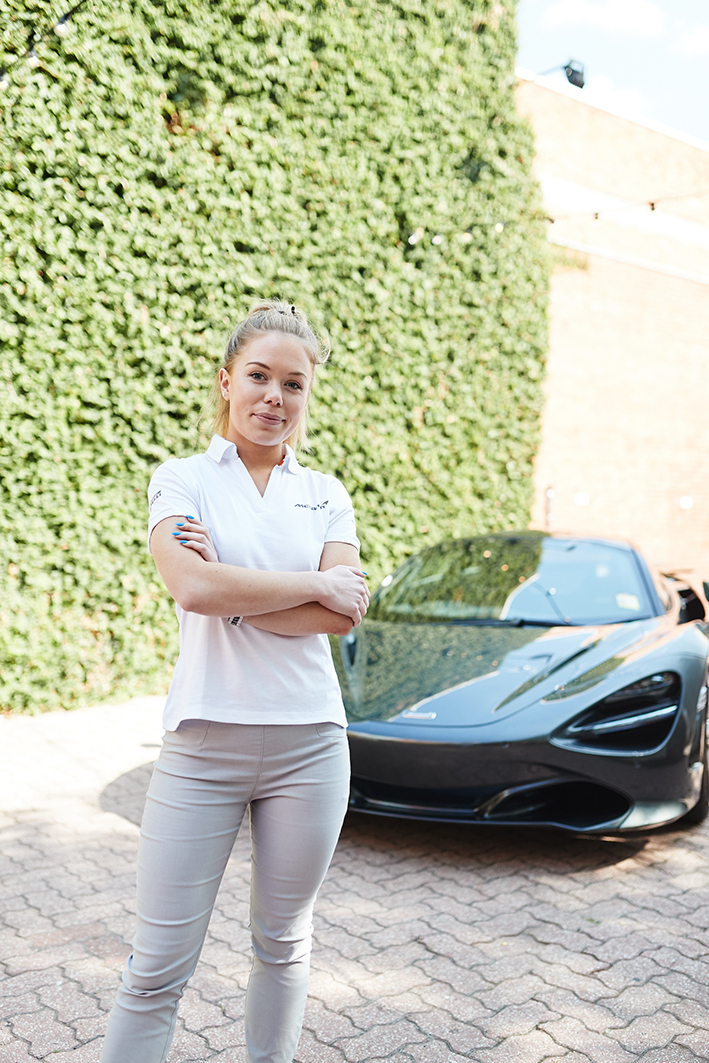 McLaren Automotive scientist and engineer Ella Podmore has been crowned the Young Woman Engineer of the Year by the Institution of Engineering and Technology (IET).

Involved in all material investigations, from first-drawings through to the final product, Ella has worked on the McLaren 765LT, the Elva roadster and the recently revealed McLaren Artura, the first series-production, high-performance hybrid from the luxury, high-performance supercar company.

Ella joined McLaren Automotive as an intern engineer in 2016, having completed a degree in materials engineering at the University of Manchester before securing a full-time role two years later.

Since then she has progressed rapidly, creating her department from the ground-up and balancing her time between experiments and leading technical meetings.

As one of over 100 McLaren STEM ambassadors, Ella is passionate about encouraging more young people of all ages to take up science, technology and maths careers.

“I am absolutely honoured to have been chosen by the IET and the judges to be this year’s winner. Those who know and work with me recognise how passionate I am about my science and, being able to talk about that and the amazing supercars I get to work on at McLaren, I want to encourage the next generation of engineers and scientists to push the boundaries of what’s possible.”
Ella Podmore, Materials Scientist, McLaren Automotive

As well as talking to young people around the world about her role, last year Ella was one of McLaren’s expert judges on the BBC Blue Peter ‘Supercar of the Future’ children’s design competition. Since then, Ella has participated in the global reveal of the Artura and featured in a film to mark the launch of the LEGO Technic McLaren Senna GTR model, the real version of which she worked on.

The IET Young Woman Engineer of the Year judges praised Ella for her passion and dynamism, noting that she represents the very best of the engineering profession and has the charisma and personality to inspire others to follow in her footsteps.

As well as highlighting female engineering talent, the Young Woman Engineer of the Year Awards identifies role models who can help address the UK science and engineering skills crisis by promoting engineering careers to more women. 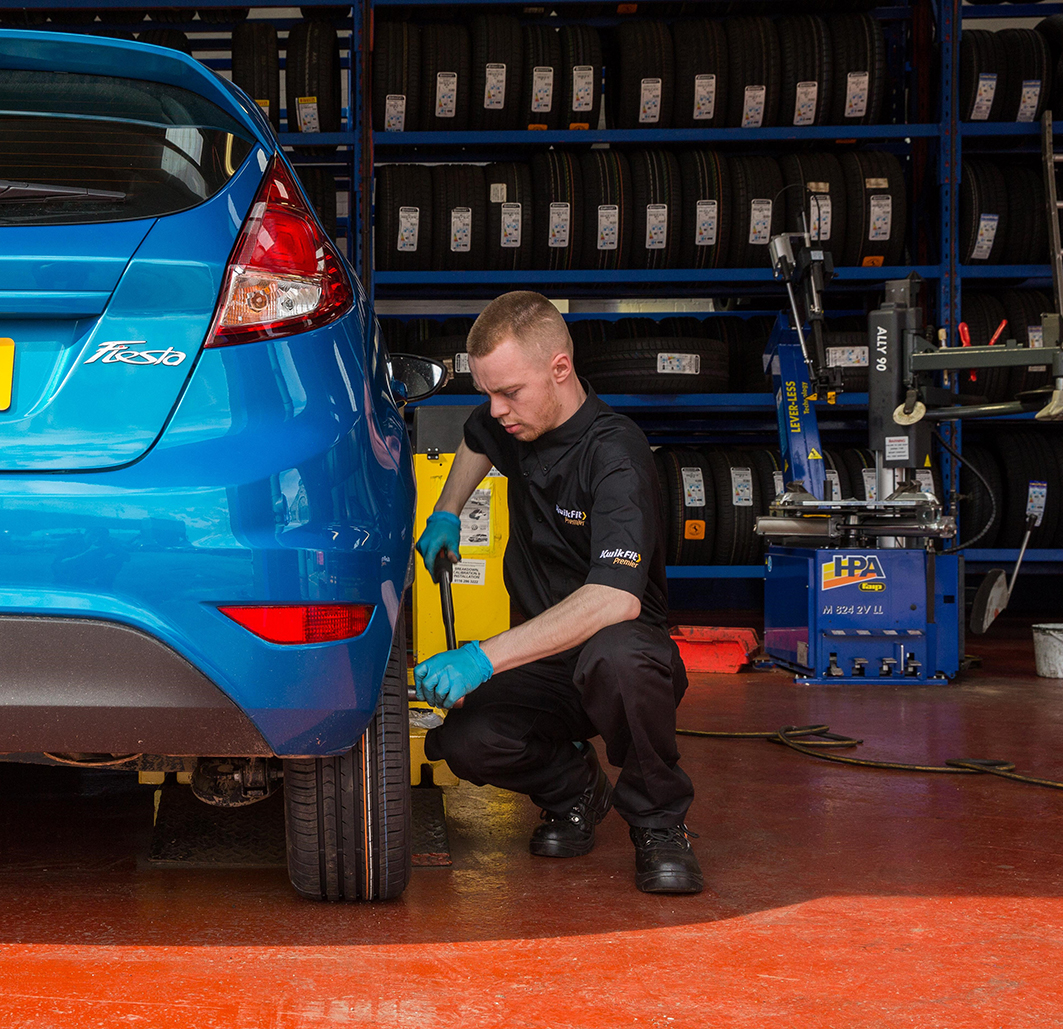 The announcement of the Government’s road map out of lockdown restrictions has prompted many drivers to get their cars prepared for increased use with Kwik Fit seeing higher than predicted demand.

With restrictions still in place, latest Government data reveals that car traffic volumes are at just over half the level of the equivalent pre-pandemic period. Car traffic levels between 4-31 January were on average 52% of the corresponding day in 2020, and while volumes increased last month, between 1-28 February the average daily figure was still only 59% of last year’s traffic flows1.

Despite this, Kwik Fit, the UK’s largest automotive repair and servicing company, has seen the volume of enquiries to its centres in February exceed the level of this time last year, before the impact of Covid. Kwik Fit’s analysis of demand during the pandemic shows that enquiries are 38% higher than expected, based on previous lockdown phases.

Roger Griggs, communications director at Kwik Fit says: “During the key lockdown restrictions at the start of the pandemic, we saw enquiries fall in line with the level of traffic volumes. However, the success of the vaccine roll out and the announcement of the road map for relaxing the lockdown, along with the upcoming return of the school run, has clearly encouraged drivers to focus on their vehicle maintenance.

“The first removals of restrictions will allow travel to families and friends but no overnight stays with other households. As a result people are telling us they are getting their cars ready for day trips, which for some vehicles will be quite a change from just an occasional supermarket run.”

Kwik Fit advises owners to carry out as many basic checks as they can to get their car road trip ready, including: 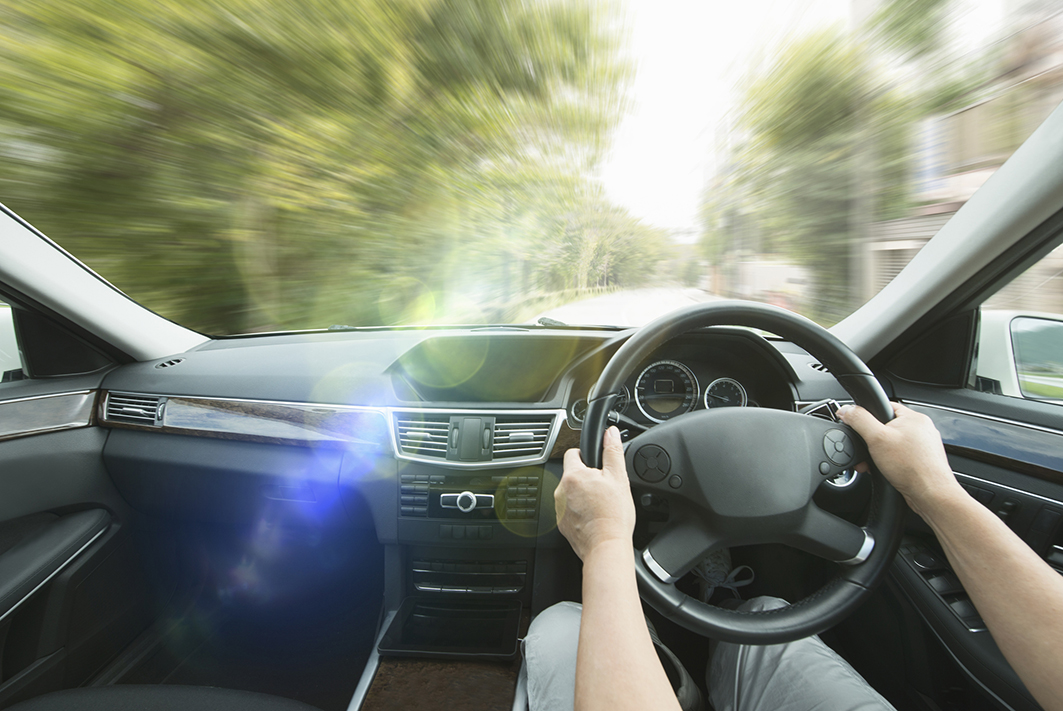 Life in the fast lane? Pensioners have more penalty points than young drivers

The findings, which came from a Freedom of Information (FOI) request to the DVLA by the UK’s largest independent road safety charity – IAM RoadSmart – also revealed that the oldest person driving with points on their licence was 102 while there are more than 3,000 over the age of 90 currently driving with penalty points.

Additional findings from the FOI discovered that there is up to 8,800 people still driving with more than 12 points – the amount at which you are disqualified – while the highest number of penalty points currently held by one individual is 68.

Neil Greig, IAM RoadSmart Director of Policy & Research, said: “The findings from our Freedom of Information request are surprising. Speeding and other motoring misdemeanours are often associated with younger drivers but the findings clearly show there is a large number of older drivers also flouting the rules.

“Regardless of age, the message we need to get through is that road safety is paramount and we urge drivers of all ages to stick to the speed limits and ensure their vehicles are in a roadworthy condition.

“We also urge government to urgently revisit the issue of drivers with more than 12 points who still have not had their licences revoked. IAM RoadSmart has been raising this issue for almost a decade now and the problem still persists. It’s not by chance that certain drivers amass 12 or more points and they need to be removed from the public roads. By letting them keep their licence it undermines the simple “four strikes and you’re out” message and this urgently needs to be addressed.” 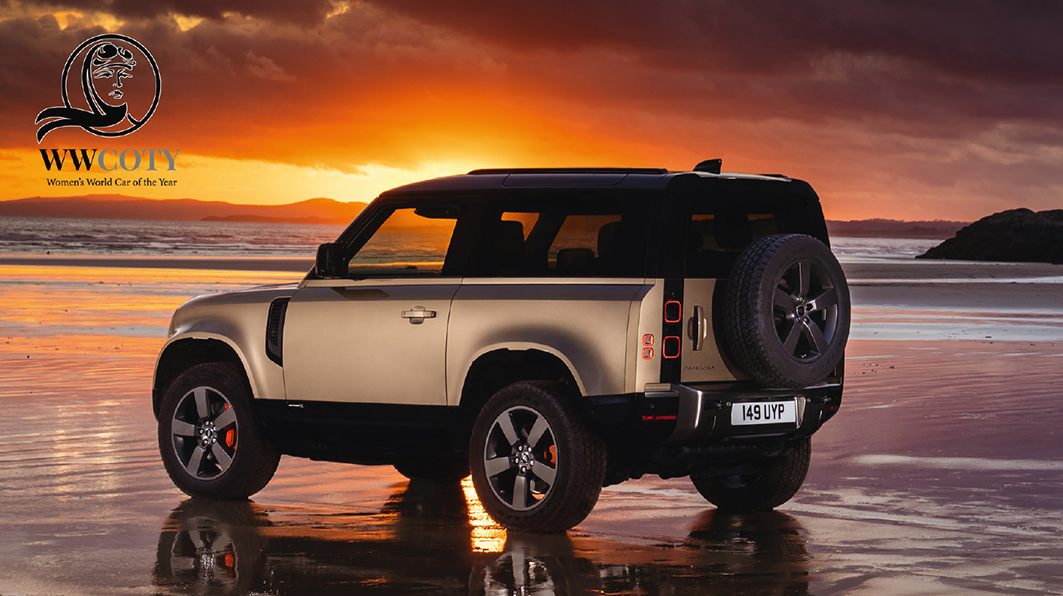 The Land Rover Defender has been named Supreme Winner Women’s World Car of the Year 2021. The triumph is the first time a Land Rover has won the top prize at the awards and is the latest in a series of international honours for the most capable Land Rover ever made.

Defender remains true to the pioneering spirit that has been a Land Rover hallmark for over 70 years and redefines adventure for the 21st century. Iconic in name, shape and capability, it is available in a choice of body designs and can be personalised with a choice of four Accessory Packs to help owners make more of their world.

The Women’s World Car of the Year (WWCOTY) awards are the only car awards in the world with a jury comprised exclusively of woman, with 50 motoring journalists from 38 countries on five continents recognising the best new models available. New Defender was named Best Medium SUV 2021 at the awards before being awarded – to coincide with International Women’s Day – the headline WWCOTY prize.

Nick Collins, Executive Director, Vehicle Programmes, Jaguar Land Rover said: “This is a huge honour for the whole team and a reward for the hard work that has gone into creating such a capable vehicle. Defender has won more than 50 international awards already, which tells us that our original vision for a 21st century Defender was the right one.