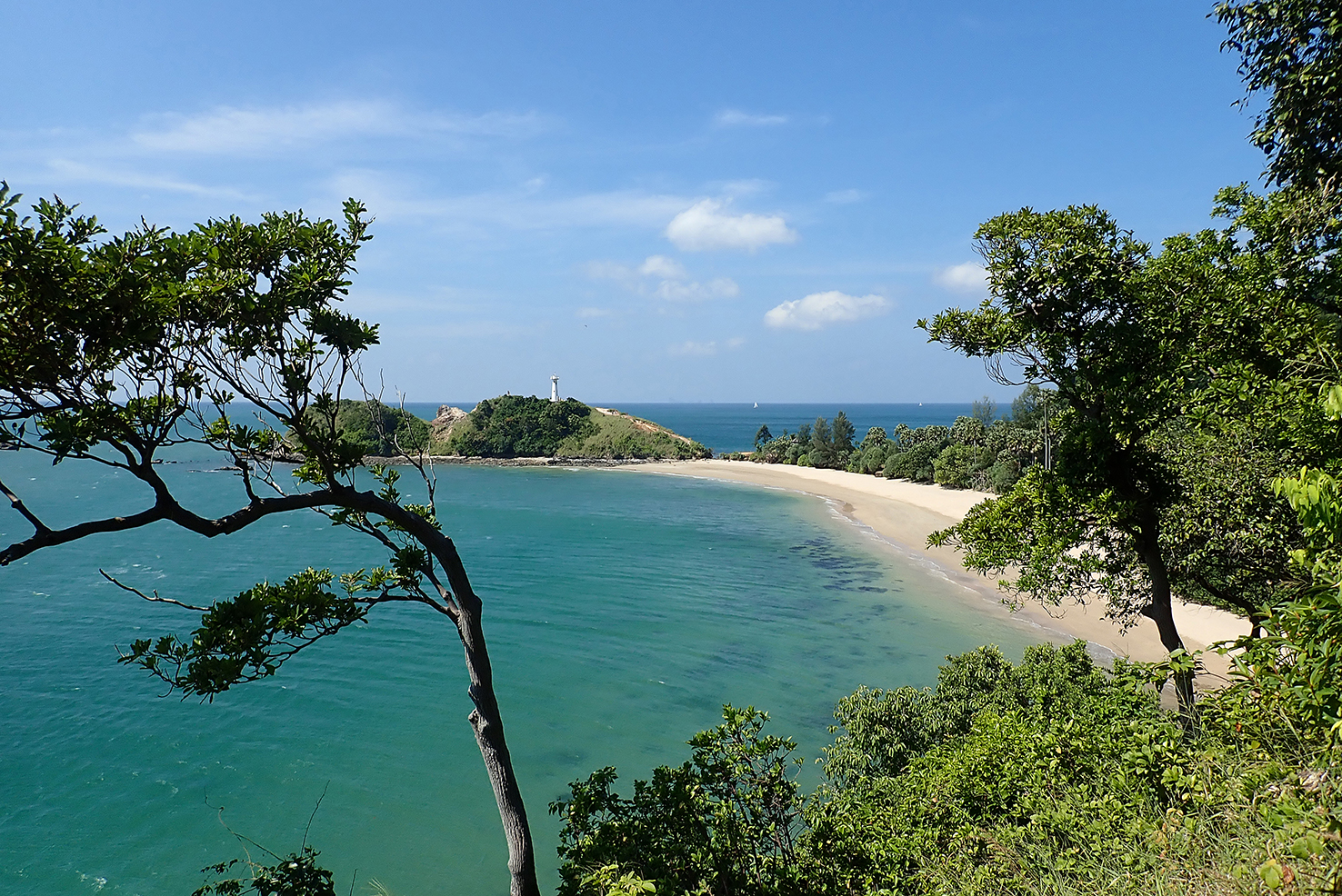 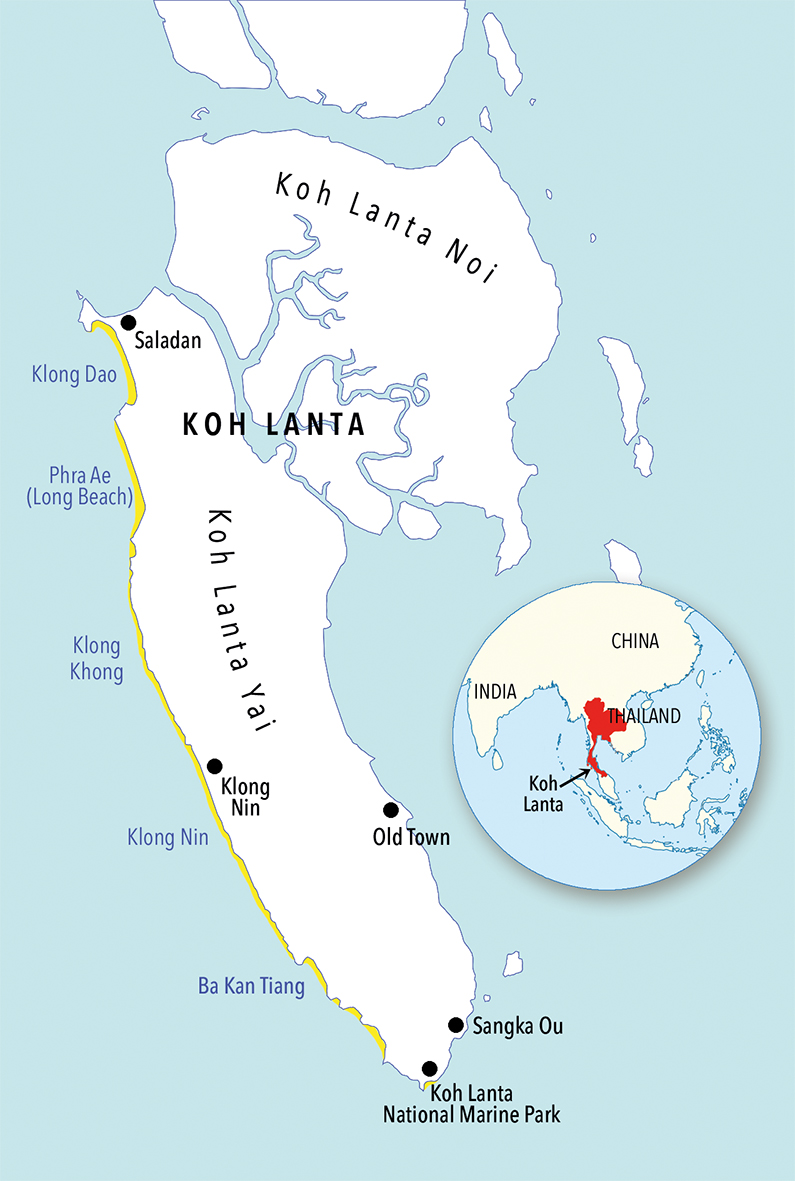 This article by Liz was due to be published last April 2020, but of course the world was turned on its head and that issue was never circulated. So here is the continuation of her Thai island hopping adventure. If you want to re-cap on her last instalment, it can be found on our website – theswanseabay.co.uk

Thailand has so many islands to explore, with over 1,430 grouped to the east and west of the mainland it was a challenge to choose the perfect location for natural beauty, but the well-trodden tourist trail led us to Koh (the Thai word for island) Lanta.

Leaving Railay behind, we got back on a longtail boat and in deeper waters waited for the Ao Nang Princess Ferry. Just two hours later, we stepped off onto Saladan Pier which lies to the north of the island. It’s a quaint harbour town, with local cafes, souvenir shops and rickety, wooden stilted seafood restaurants looking out over the water towards Lanta Noi (little Lanta Island). 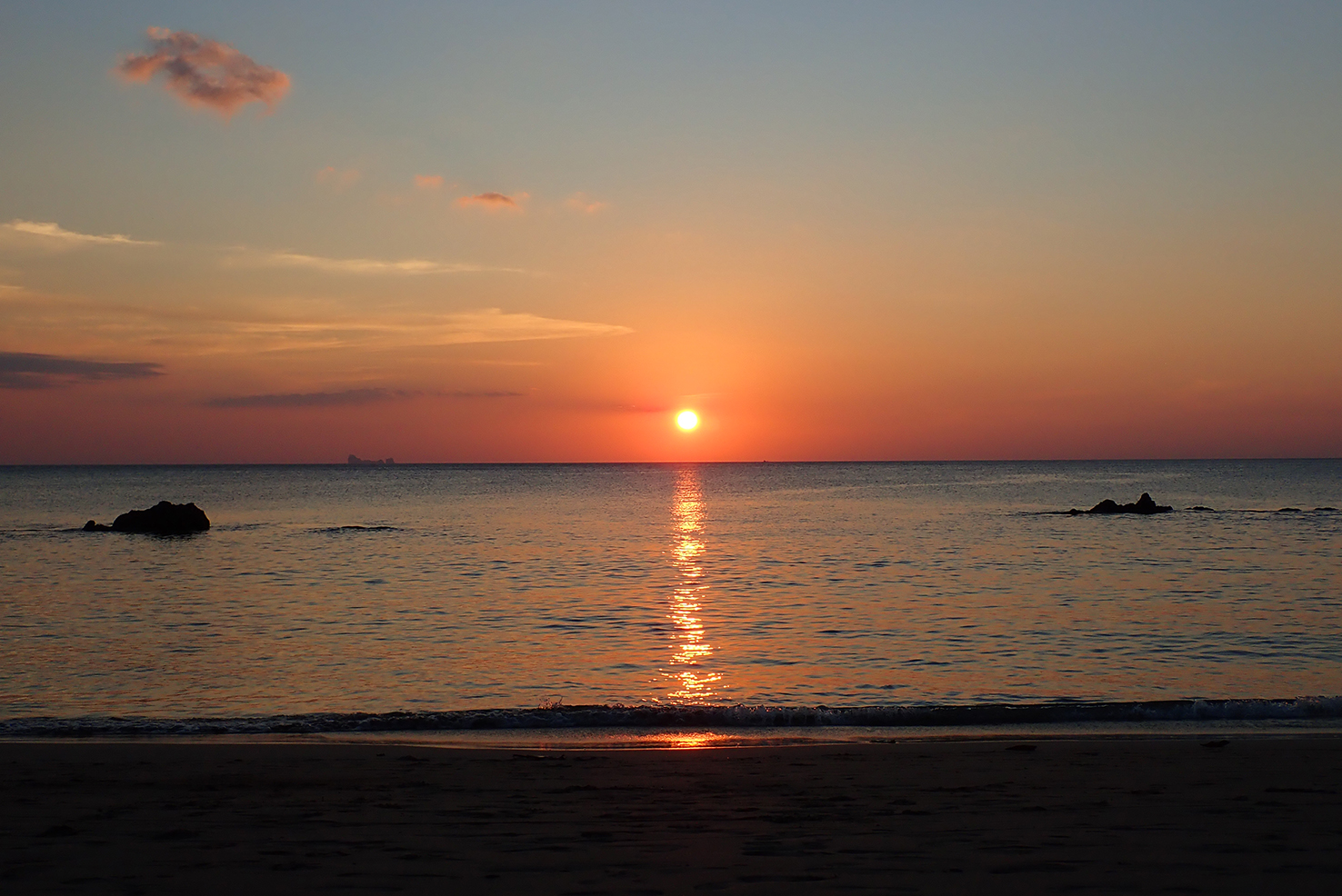 Koh Lanta’s original Malay name Pulao Satak, translates as “Island of Long Beaches,” a fitting title as the longest beaches in the Krabi province are here. There are over a dozen, beautiful, unspoilt and coral fringed beaches, each with its own distinct charm and atmosphere. The further south you travel from the port of Ban Saladan the more remote they become, quieter and with less amenities. We chose to stay at Klong Nin, a small village half way down the island at the Sri Lanta Resort. Tucked away on a hillside, it’s inspired by its natural surroundings, amidst a tranquil landscape that’s just a stone’s throw across a quiet island road from a picture-perfect sandy beach.

Umbrella trees provide some natural shade along a front, lined with cafes and restaurants, thoughtfully built not to encroach onto the beach. Whether sitting on the soft sand or in the local bar you are guaranteed an unobstructed view of the deep blue sea rolling across the golden shore, making it an ideal place for swimming and watching spectacular sunsets. 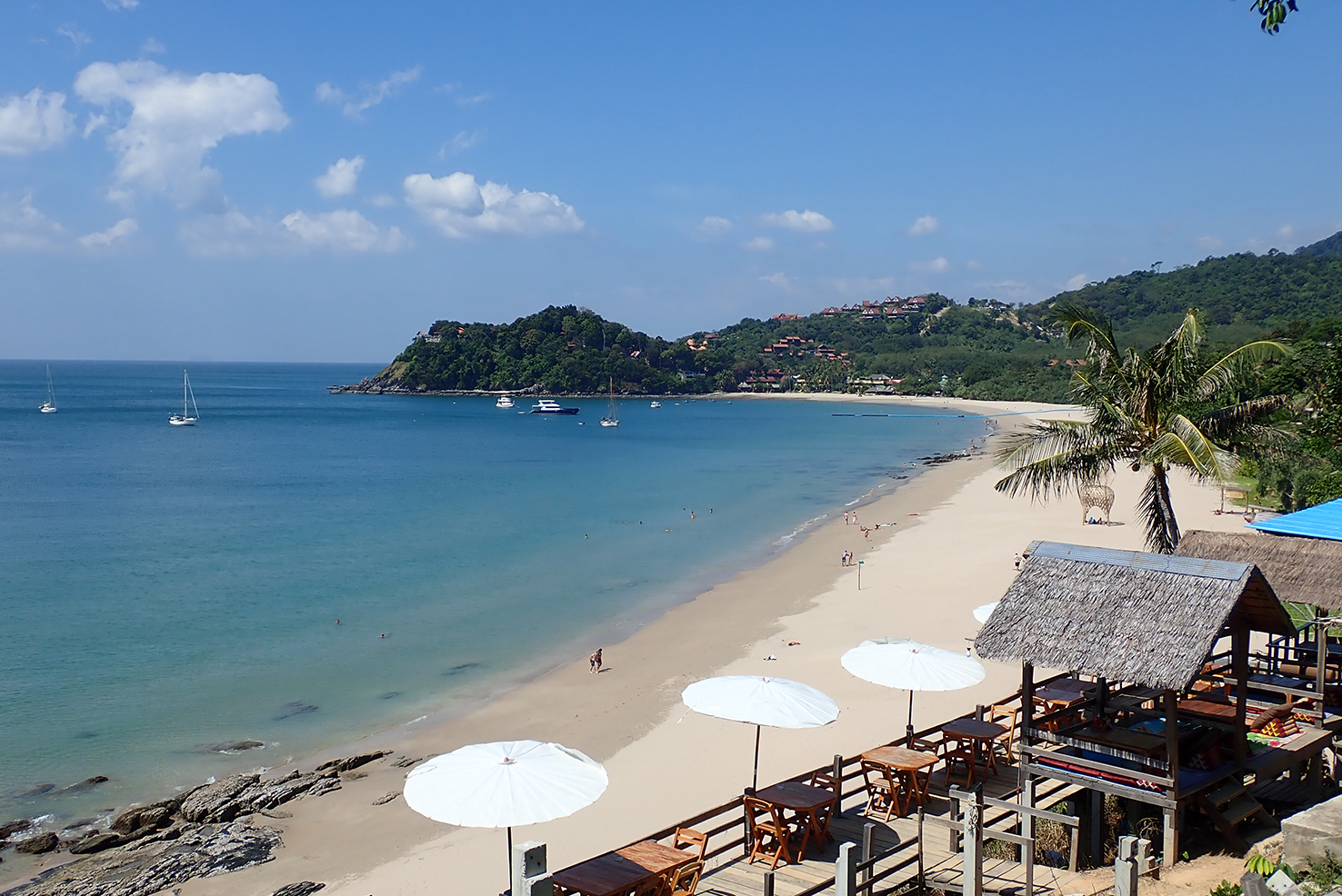 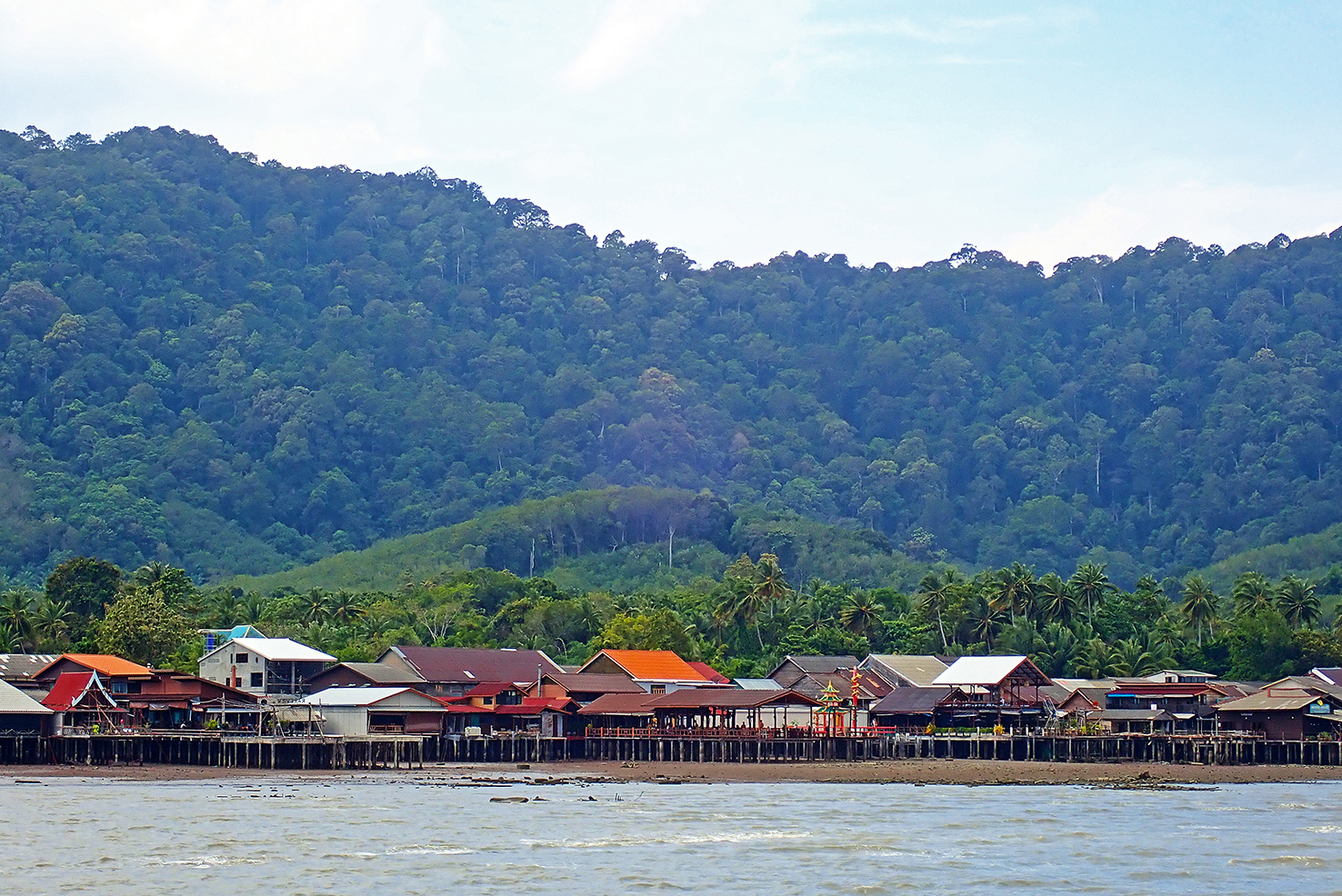 Klong Nin is also close to one of the island’s historic sites Koh Lanta Old Town. This was originally a village belonging to the Chao Leh (people of the sea), a seafaring Indo-Malay tribe also known as Sea Gypsies who populated the island over 500 years ago. It is believed they were the very first inhabitants of the Andaman coastal regions of Thailand, Myanmar and Malaysia.

A strong tie with the sea led them to build stilt houses, which today sit alongside traditional teak houses. Tropical birdsong emanates from caged birds, their cages suspended from the rafters, alongside red Chinese lanterns – decorations that are testament to how the district changed, when Chinese merchants settled here after it became the island’s main port for Chinese and Arabic ships sailing the Phuket-Penang-Singapore trade route.

Today over 400 of the Chao Leh occupy another enclave on the island, the southern village of Sangka-Ou. Many now live in more permanent residences though in keeping with tradition, near to the beach, close to the sea. These are basic dwellings with tin roofs, that are not so different from those used in their past nomadic lifestyle.

The Old Town with its long pier jutting into the sea between islands, Chinese temple, fishing boats and swaying palms, is an enchanting place where time has stood still. Even today it is firstly a fishing village, with a laid-back feel, there are a few local gift shops and lovely cafes and restaurants built on stilts, which offer breath taking views across to the mainland when the tide comes in, but tourism is low–key. 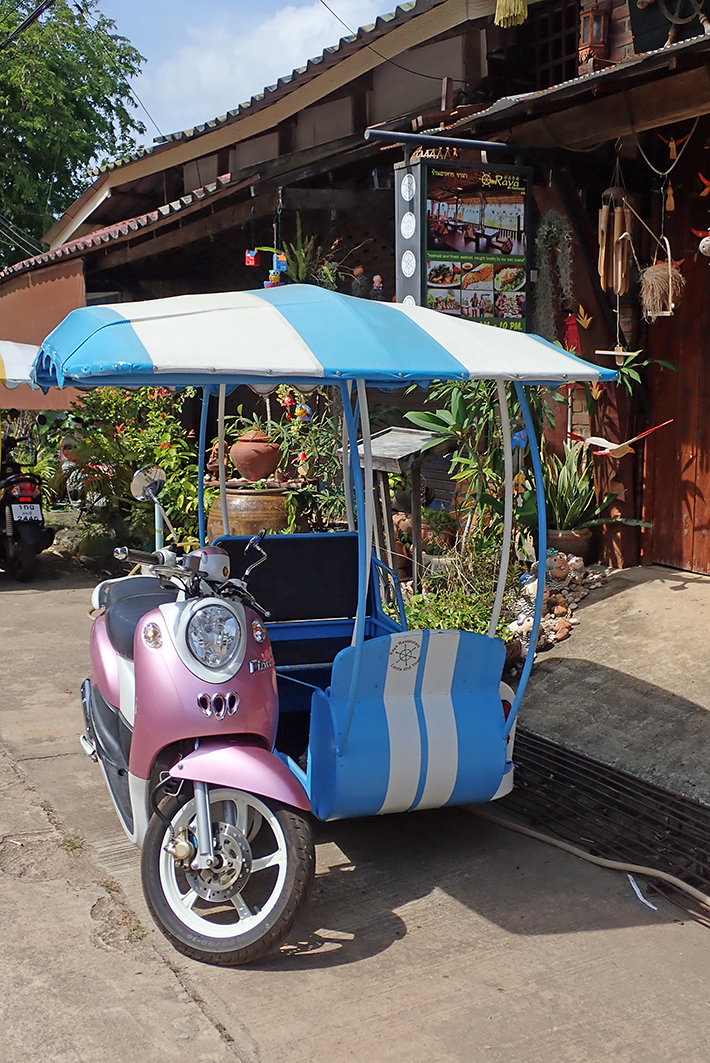 Our drive through jungle edged villages (there is very little development on this side of the island) was made in a motorbike sidecar taxi (pic right). Our driver was a beautiful lady with a complexion the shade of light brown sugar, her face swathed by folds of a blue head scarf (Koh Lanta has a diverse population including Malay- Muslims, Buddhist-Chinese) and flip flops on her feet. Her smile and laughter were infectious, especially when a hill loomed large before us, presenting a challenge for the moped. At this point I had to jump on the seat behind her, wrapping my hands around her tiny waist, holding on tight, riding pillion just to make it to the top.

Thailand has 62 national parks and reserves, Koh Lanta is the largest of 52 islands in an archipelago protected by the Mu Koh Lanta Marine National Park, established in 1990. Many uninhabited, some are truly remote and offer the possibility for an overnight stay. 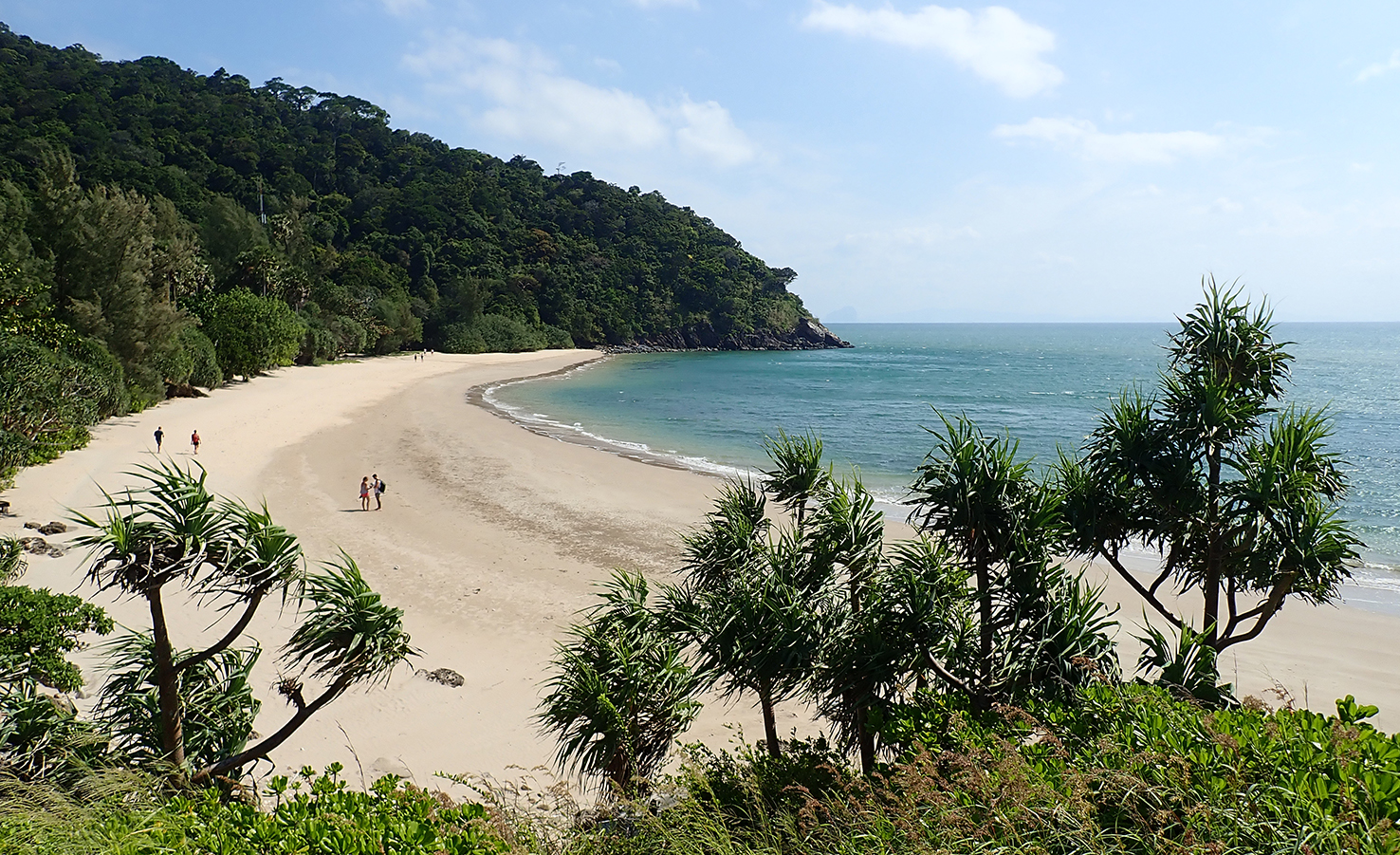 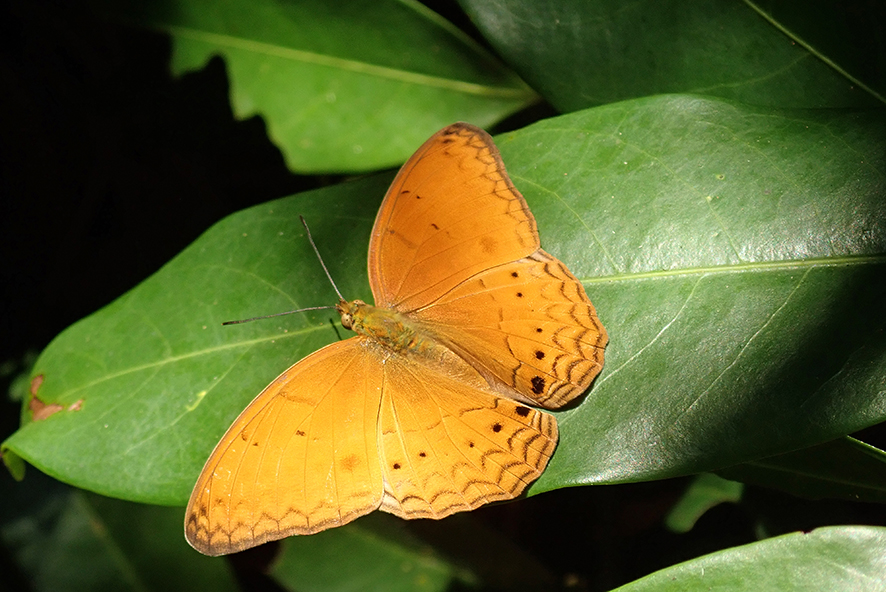 The park stretches across the southern tip of Koh Lanta offering breathtaking views and diverse scenery. A sun-bleached white lighthouse stands erect on a hill, in stark contrast to the glinting turquoise waters of the Andaman Sea. To one side the coast is rocky, the other a beautiful sun-baked beach (pic above). Watching waves crashing against the base, we got our first glimpse of the colourful aquatic life that is bountiful in these waters as a turtle swam quite close to shore.

Along the cliffs a nature trail leads into the rainforest which backs onto the beach. Rays of light broke through the green canopy above our heads, quivering shadows fell across our path as we climbed through the forest. We had been told there would be a strong possibility of encountering monkeys, but not that day, instead we watched delicate orange butterflies (left) flitting in the sunlight and listened to the chattering of birds.

approaching Koh rok islands by boat, docking by the floating pontoon on the northern island of ko rok nai 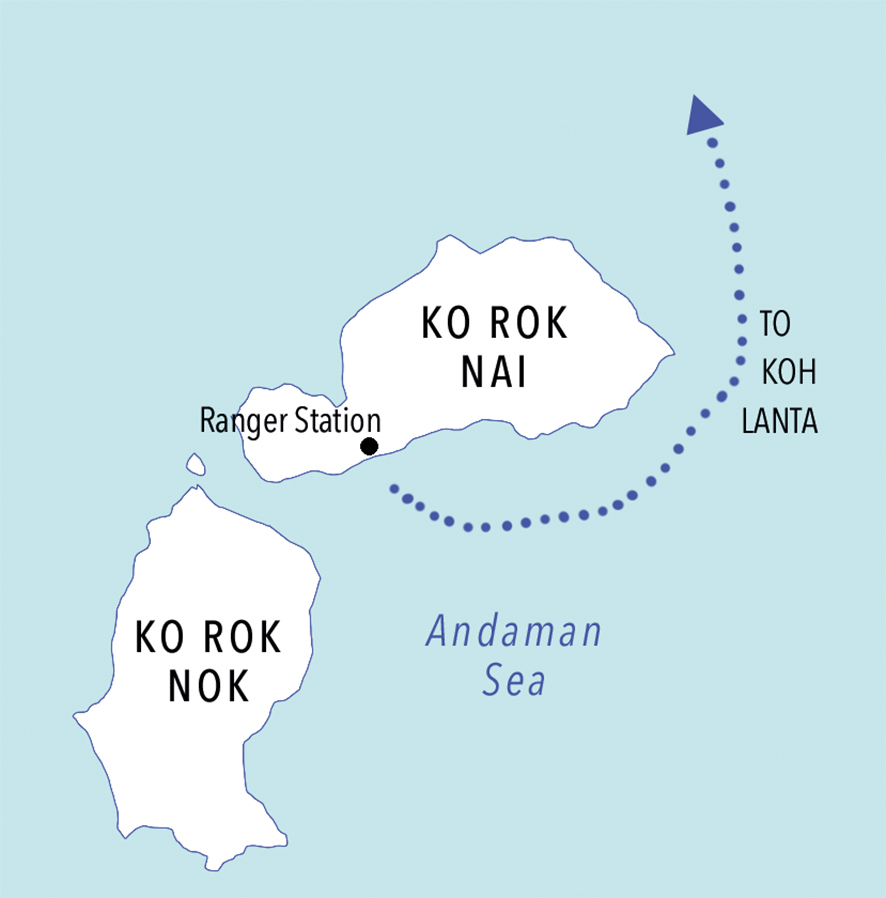 Visiting other islands was easy from our beach front resort, where we could book trips from local shops. We took an exhilarating forty-minute speedboat ride on the Rattana Island Tour – at times it was a bit hair raising and we did get wet, but it was all part of the adventure.

We spent the day on Koh Rok Nai; our early arrival meant we had the beach almost to ourselves, it felt as if we had landed on a Robinson Crusoe Island. Here we found a verdant jungle of Banyan trees, fine sand, and water so clear that we easily spotted tropical fish just by walking along the floating pontoon.

The sea was a striking shade of brilliant turquoise, with shoals of small fish darting between our feet, while the water was so warm it felt as if we were relaxing in a bath. We took turns using a mask and snorkel, mesmerised by the exotic fish swimming amongst the coral.

By late afternoon several other boats had dropped anchor. 100 metres of clear water separates the twin limestone islands of Koh Rok Nok and the equally remote tropical escape of Koh Rok Nai, an expansive coral reef makes this area one of the best snorkelling destinations in Thailand.

When you find paradise it is hard to leave, but reluctantly we walked back along the pontoon, taking one last look back, holding onto the vision of untouched natural beauty and abundant marine life of this deserted island.