Bay view from the top of Clyne Gardens 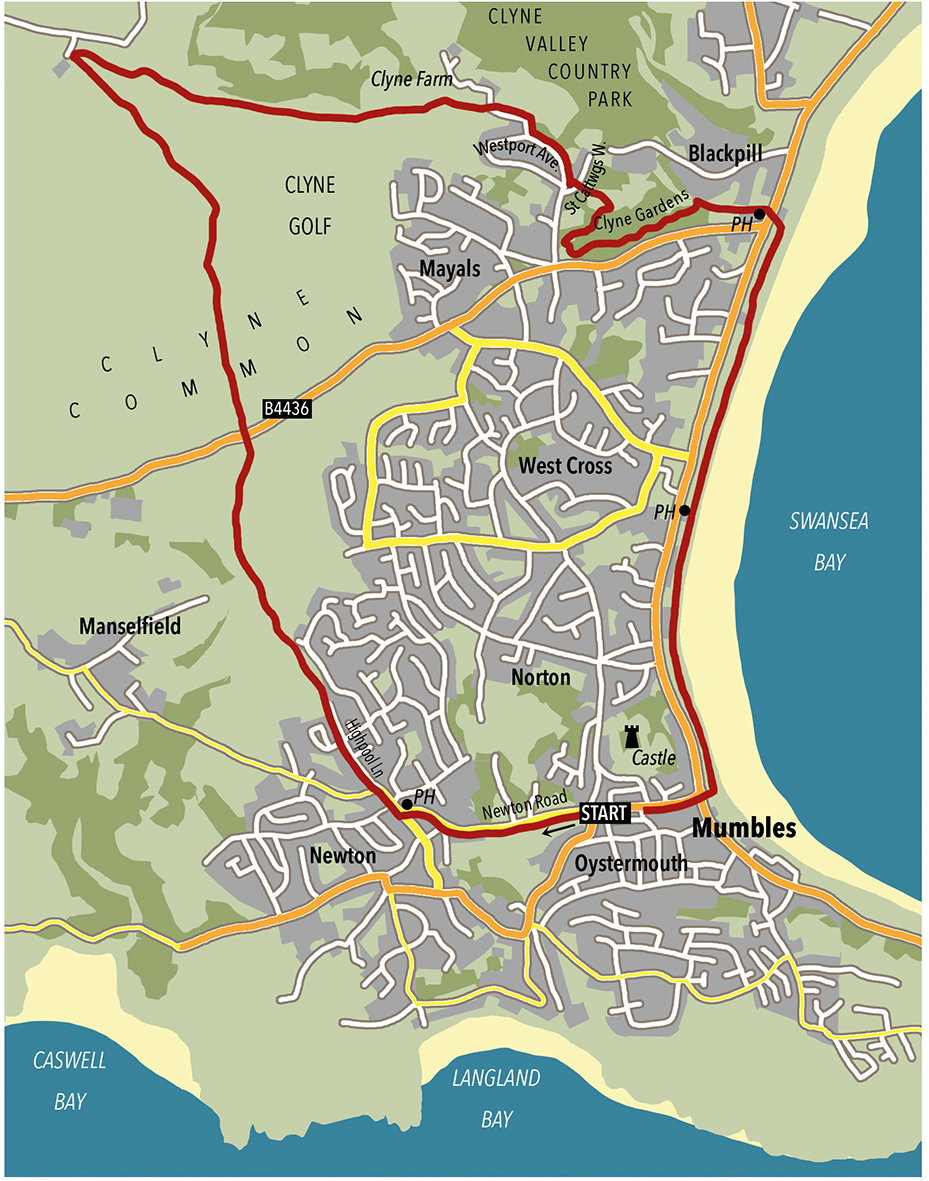 Ian takes us on a circular walk that will be familiar to many. With the current restrictions on how far we can stray from our homes, we are all making the most of our beautiful coastline. This walk takes in Clyne Gardens, just one of the amazing green spaces we are lucky enough to have on our doorsteps.

“You’re on mute Malcolm. FFS MALCOLM, YOU’RE ON MUTE!!!”. This is a familiar scenario for anyone who has relied on Zoom in the past year, for work meetings or to catch up with friends. This applies to the vast majority of us I’d imagine. For the uninitiated, Zoom is a conferencing facility where you can communicate with colleagues and friends via a video link. The participants appear in a ‘Celebrity Square’ type grid on your computer screen and the ‘host’ has control over proceedings in that he or she can decide who to allow into the meeting and also who can be muted, but you can also mute yourself – usually accidentally as the above example describes

Only one person can talk at a time, and so the competition for air space is quite fierce. The more, er, talkative amongst us can tend to hog proceedings to the exclusion of others, and it can be challenging. The optimum number of attendees is probably two, four max, any more and it becomes a survival of the fittest bunfight. Of course, the host could theoretically mute the offenders but that is the equivalent of reaching over the pub table and slapping your hand across their mouths, which is at best socially unacceptable and at worse provocative. So, people just sit there in quiet resignation.

They can therefore become a little disillusioned when they can’t get a word in edgeways, sideways, any old ways and then you can judge by their sense of submission in their body language and vacant expression that they’ve simply given up and have taken to watching ‘Strictly’ which they’ve kept on in the background predicting this very inevitability. Massively in vogue at the start of lockdown especially on the social scene, its popularity seems to have waned more recently. So what better excuse do you need to escape the terrors of the Zoom meeting/ catch up, than to get out into the fresh air now that the nights are drawing out and weather is improving (cue seamless and predictable link).

This month’s walk lacks a bit of the wow factor as we’re still unable to exercise from anywhere other than home (although this has changed in the past few days), but it does give us a different perspective on familiar sights and the views across the bay aren’t at all shabby either.

So, starting off in Mumbles, make your way up Newton Road and right at the pub. 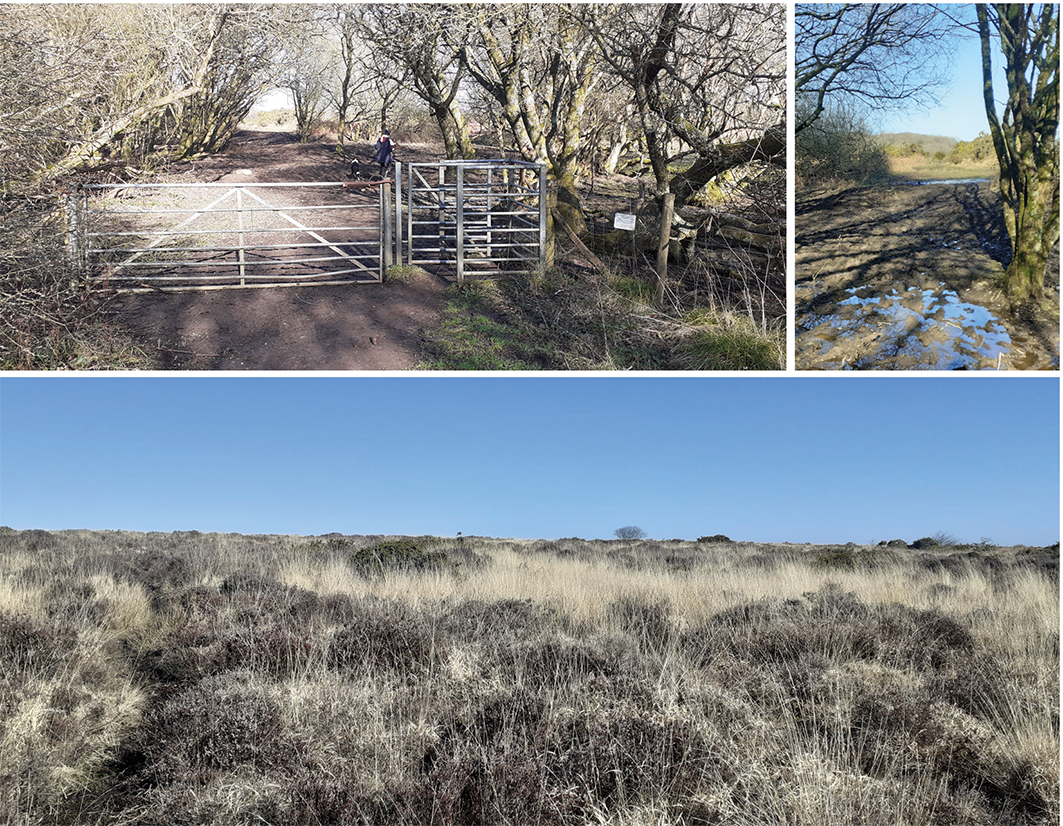 Where the road then swings left, keep straight on up Highpool Lane until you come to a gate leading onto a track and a bit further on another gate and onto the common. According to the map there is a public footpath from here to the B4436 but it’s not easy to find. However, there are obvious routes you can follow which eventually will lead you to the road. Basically, go straight ahead and towards the horizon. One word of warning though, it is very muddy here. It’s a quagmire to be honest, so wear appropriate footwear.

The cast expanse of Clyne Common ready to be crossed, eventually skirting the edge of Clyne Golf Club

On reaching the road, look out for a gate and there’ll be an identical one on the opposite side of the road. Carefully cross the busy road, go through the gate and onto the wide expanse of Clyne Common. Follow the discernible path ahead which snakes its way through the gorse towards the golf course. A path will appear from left to right in front of you but carry straight on. It can get a little confusing along here, so best be careful especially as you’ll be approaching the golf course and you really don’t want to upset the members. The poor buggers haven’t played in months and the last thing they need is some-one in muddy walking boots treading on their ball, especially if it’s their 9th shot to the green, and of course you also need to avoid the chances of having a 4-iron wrapped around your neck. Follow the waymark sign directing you just slightly to the right, at about 1 o’clock – then bear left along the edge of the fairway, past the green on the right and then follow a waymark sign bearing right and then after 50m or so another directing you to the left. 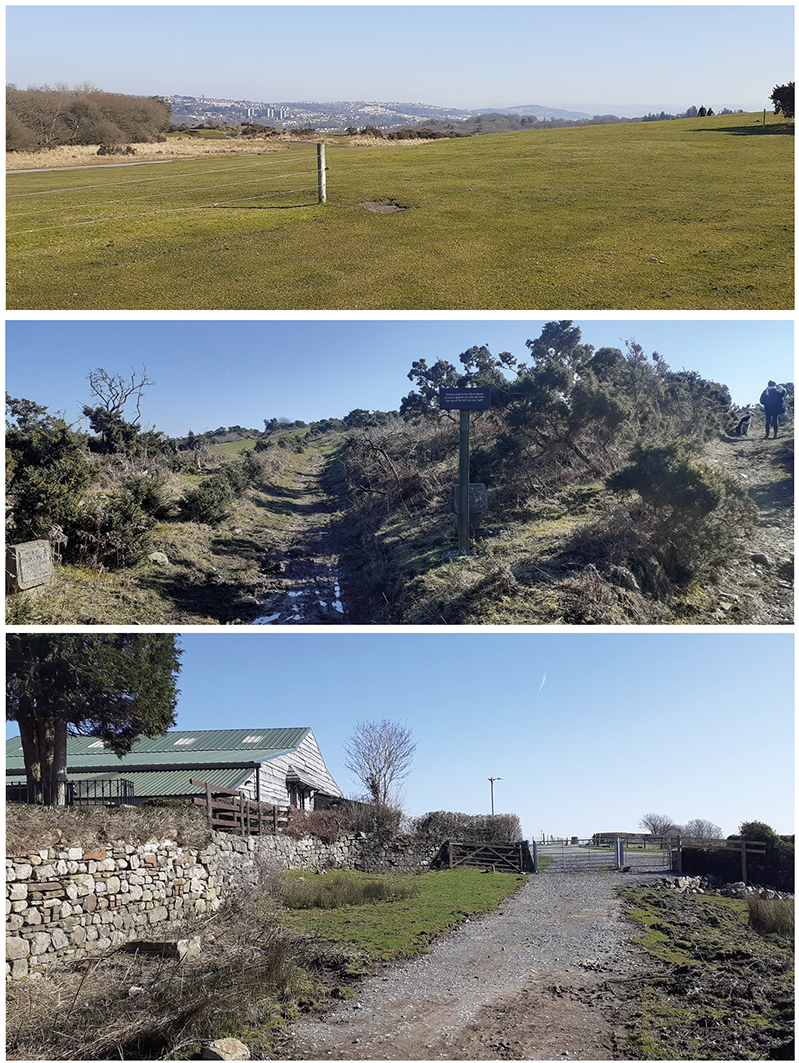 Follow the white signs bearing left all the while and some farm buildings should be coming into view on the left. The path takes you past two elevated tees and after the second one turn right onto a road track and then after 50 yards or so turn sharp right again back onto the golf course, making sure you choose the way marked path which runs through the gorse slightly to the left of the fairway. After a short while, you’ll have a choice of paths and you go left which eventually leads you to Clyne Farm, which is now a popular outdoor adventure centre. Along the way, views of Killay, Sketty and the hills overlooking the city will appear to your left and once reaching the farm, very pleasing views of the bay itself ahead. That’s the beauty of Wales; you’re almost guaranteed a decent view along your walk wherever you go.

View from the top next to Clyne Farm 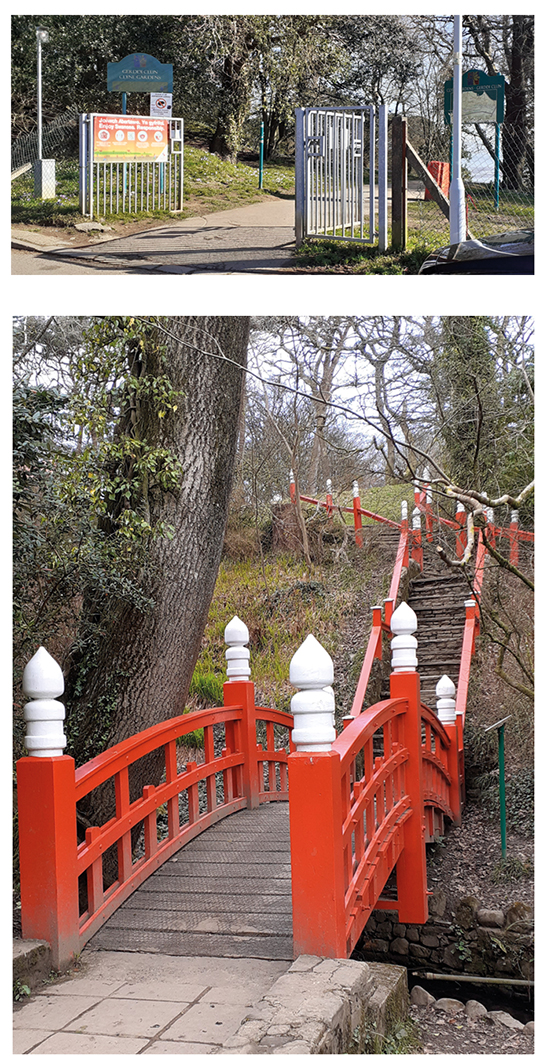 Before setting off on this walk I thought it might be a little featureless, but fair play, the views around here are pretty good. Through the farm, then on along its access road, ignore the path which appears to your left and exit onto Westport Avenue. Down the road to the left and look out for the entrance to Clyne gardens also on your left, along St Cattwgs Walk. Now, Clyne really needs no introduction to us locals and spring is the best time to savour its beauty. When I did this walk, the park was just girding its loins in readiness for the impending colour-fest, so by the time you read this, the rhodo-dendrons, azaleas etc. should be a little closer to being in full bloom. You’ll be exiting the park by the Woodman pub, so the choice of route through the park is yours. I headed to the right just after entering the grounds and sought out the Japanese bridge then followed the stream down the enchanting wooded valley because I think this has the highest density of flowering trees and shrubs. However, take some time to explore the park as it’s got much more to offer. The gardens were largely shaped by the local millionaire Glyn Vivian after he bought the castle and grounds in the late 19th century. It was later develop-ed by his nephew, the ‘Admiral’ Algernon (now, there’s a name that needs to make a return to fashion) in the 1920s. Reading the council blurb on the place, it’s a haven of tranquillity, lush planting and interesting features including the aforementioned rhododendrons, pieris and enkianthus, the bridge and kooky Admiral’s tower and would you believe, the tallest recorded magnolia in the entire UK!

Your walk here will be perfectly timed too because it will coincide with a National Trust sponsored campaign to celebrate the emergence of spring by promoting Blossom Watch, an attempt to ’help lift lockdown gloom’ by encouraging people to share images of colourful blossoms on social media. In its second year, research has found that ‘spending a few moments looking at and enjoying blossom can have a surprising impact on feelings of wellbeing’. Or they could just reopen the pubs I suppose. 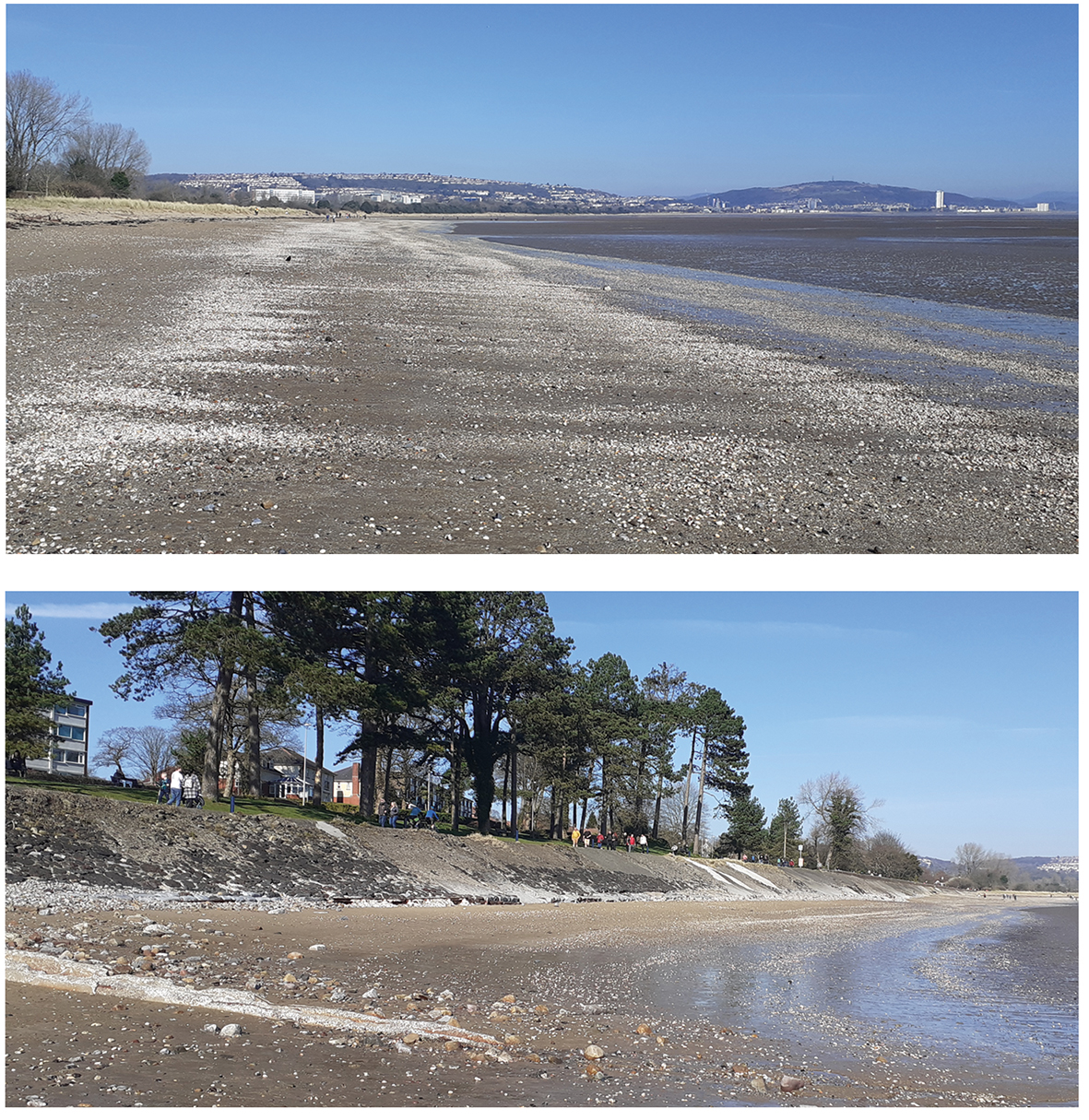 Bay views from the sands

Folds in the rock

Once you exit the park, the return route is pretty obvious, following the prom back to the start. One point of interest is just by the West Cross Inn. For anyone who read my last walk, I mentioned that the landscape of the bay was a result of various complex geological processes over time, one of them being massive folds in the rock strata (Remember? No?). The underlying rock was pushed together by enormous forces forming corrugated shaped folds or waves, termed anticlines and synclines. Erosion then slices the top off the wave and the results can quite clearly be seen just below high-water mark. Yes, mm……..interesting.

I think I need to get out more.

Simon & Garfunkel: April Come She Will

Talk Talk: Life is What You Make It

Joni Mitchell: For the Roses