This month we meet the superstars of the frozen north in the form of the Arctic dog, find out what makes the humble bumble bee so special, travel the world with Pan Am’s legendary air stewardesses, and take a look at where we might be living in five hundred years’ time… 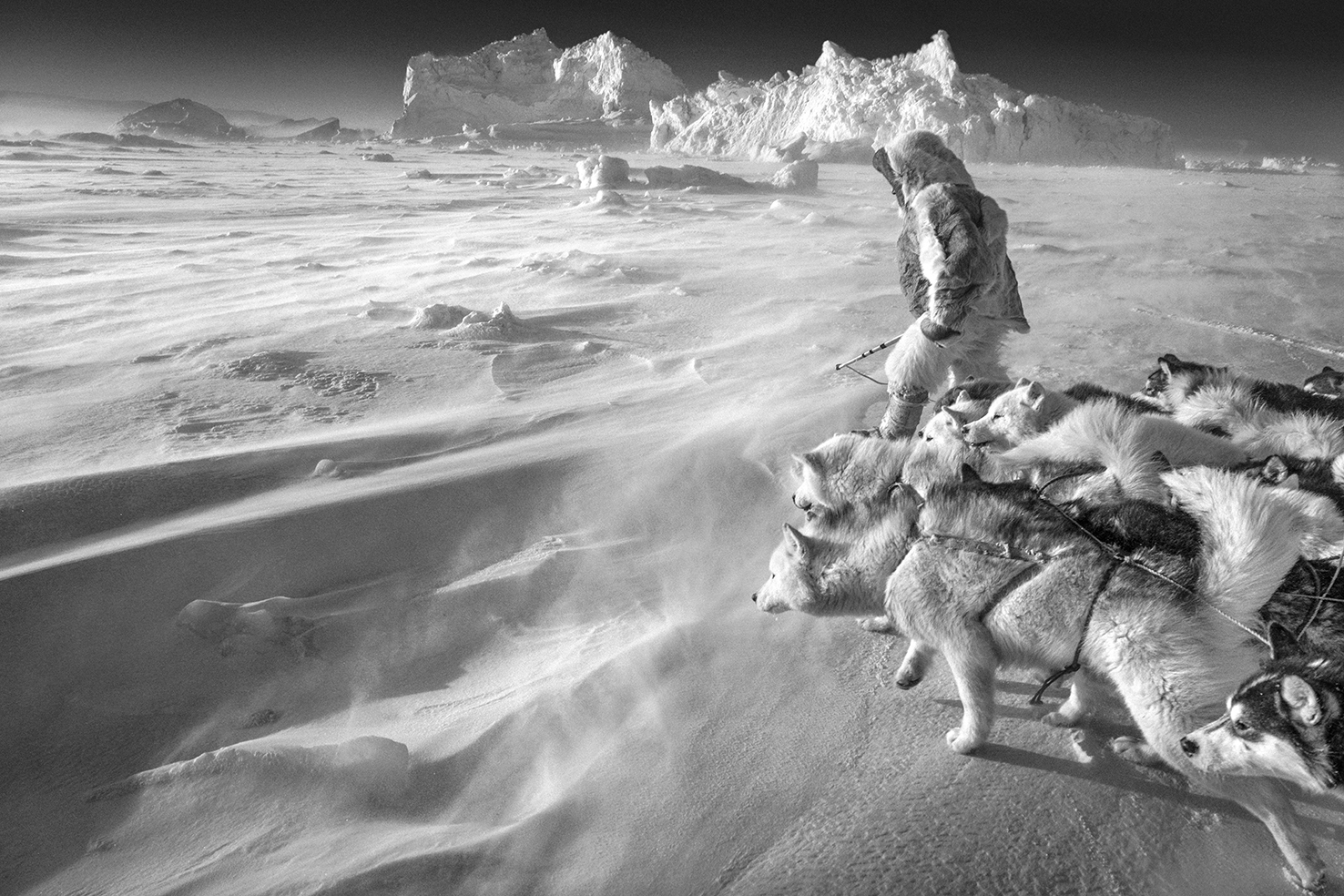 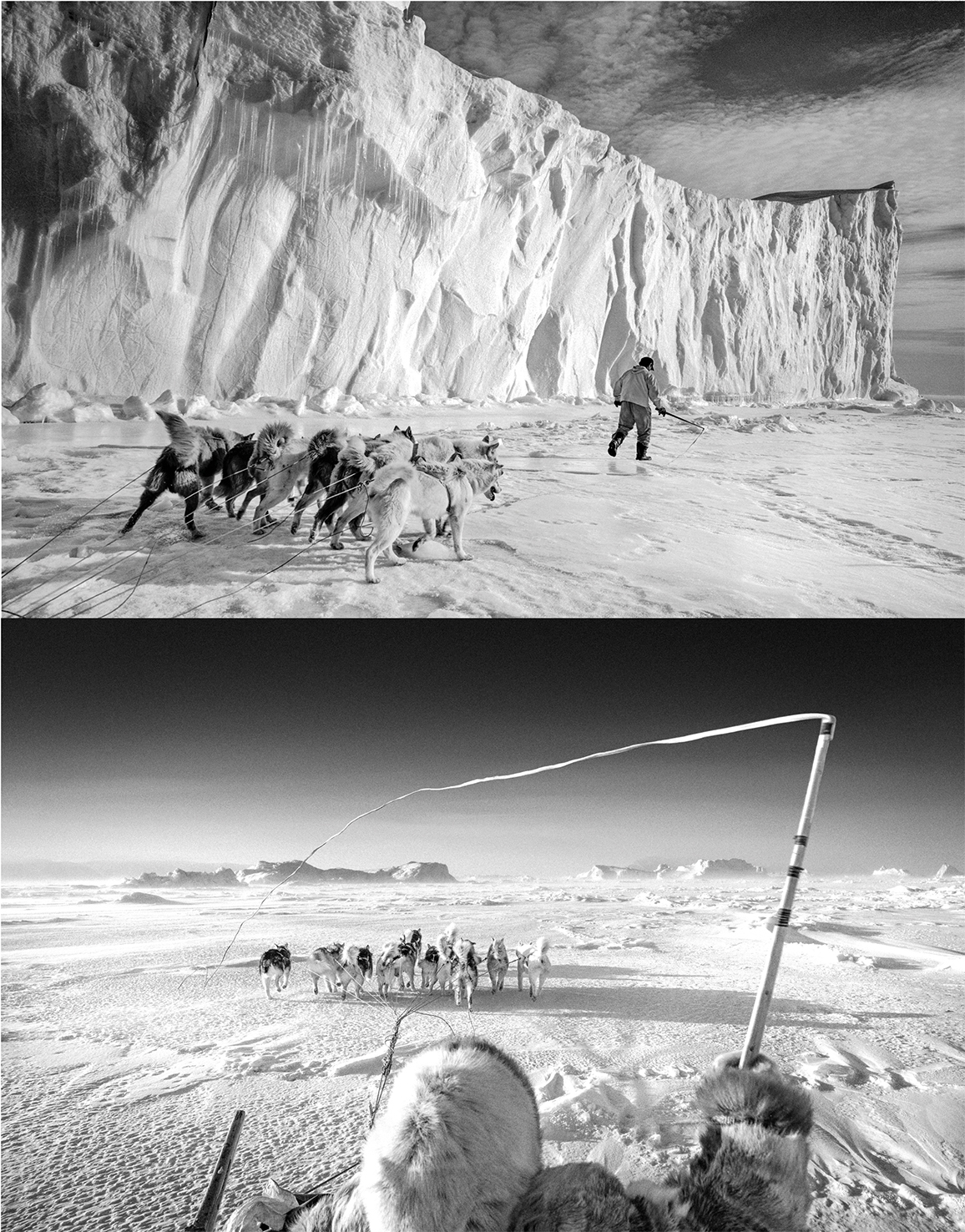 “I feel the world needs to know the story of these heroes of the Arctic,” says Ragnar Axelsson. He’s Iceland’s most famous photographer and probably one of the best in the world when it comes to getting right out into those cold places and coming back with incredible images. But when he talks about heroes, he’s not talking about the human variety, such as his fellow Icelander Leif

Erikson, the tenth century explorer and the first known European to incontestably set foot on the continent of North America. Rax – as Axelsson is known to all – is talking about dogs. To be precise, the Greenland sled dog – ‘part wolf maybe’ – and ‘the most incredible animal.’ Rax has a reputation for photographing exclusively in the world’s northernmost territories in the most appalling of conditions, and his subjects are usually the traditional people of these northern countries – the hunters, fishermen and farmers – who lead vanishing lives in 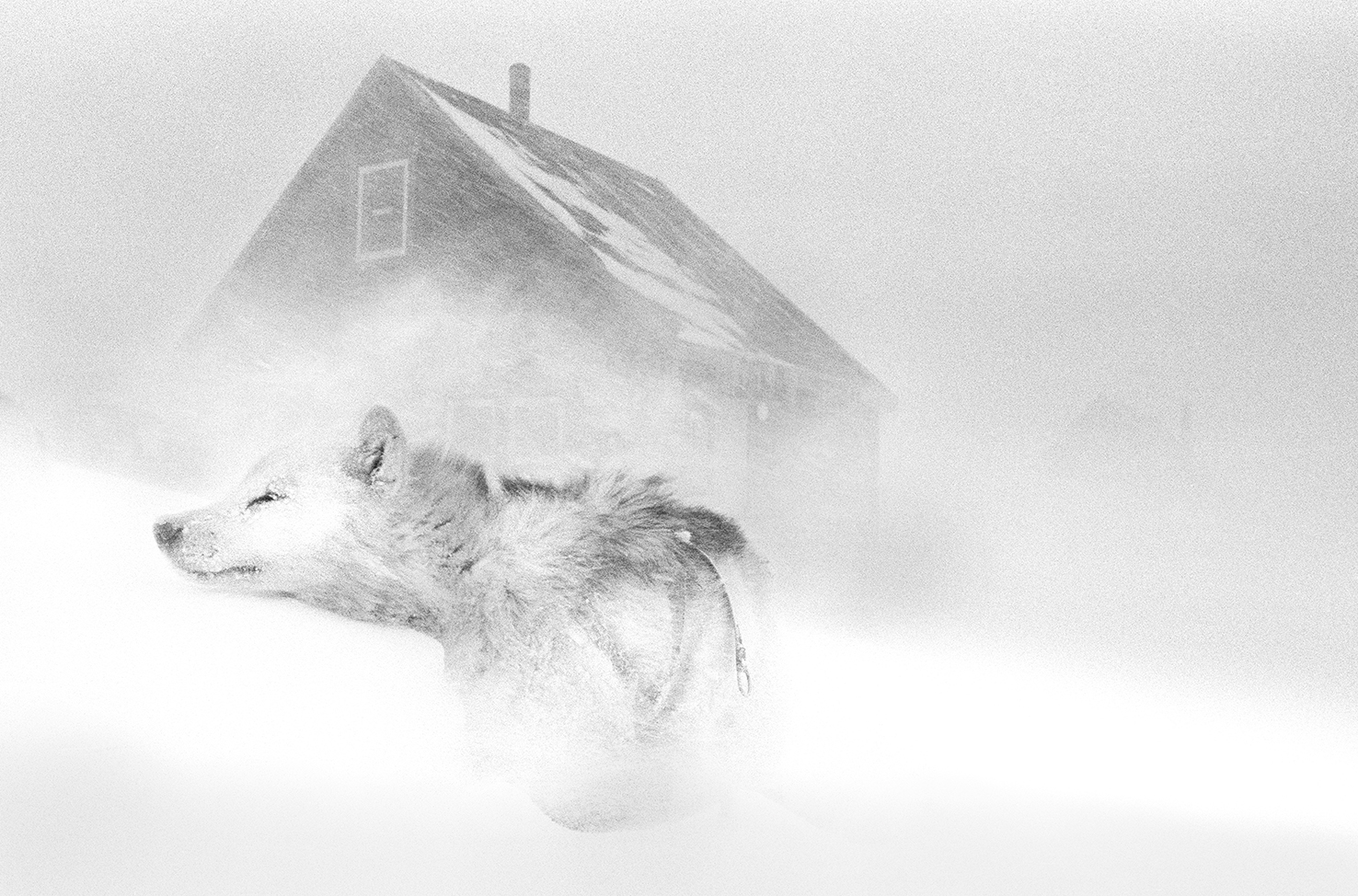 the face of the younger generations migrating to cities in pursuit of well-paid and comfortable digitalised existences. But Rax’s fascination is for the old way of life, the stubborn arm-wrestle between man and the bitter cold and brutal winds of the north. A few years ago, he focused on these people in his monumental Faces of the North. Now he’s turned his attention to their dogs. And being the perfectionist he is, his latest – Arctic Heroes – is stunning, monolithic and monumental. No one could doubt what a great photographer he is, but it’s easy to overlook just how experimental some of his work is. He breaks all the rules and still comes up with the goods. In close proximity to his haunting formal mastery of the black and white medium, there are breaches of compositional etiquette and moments of theatrical absurdity. In between shots that follow the orthodox playbook for photography, there are images that break just about every cardinal rule, with his almost casual unintended camera motion, complete disregard for focus, skew-whiff horizons, light trails and white-outs. And yet, somehow, all this improvisation combines to produce nothing less than a masterpiece. 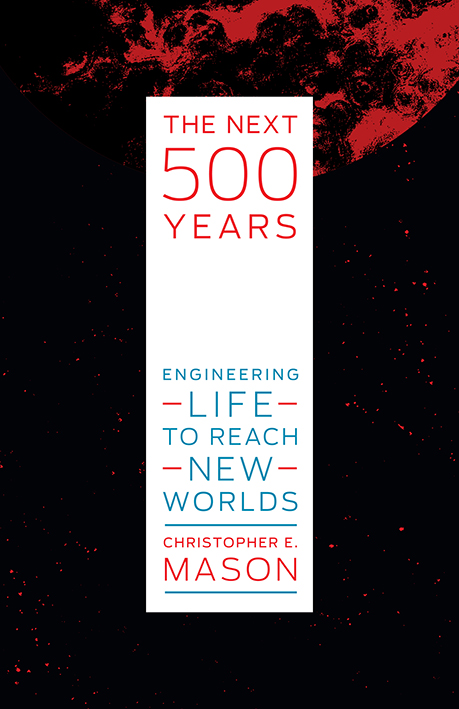 If humans are to survive into the next millennium, we need to to work out how adapt to living in the furthest reaches of space. And we need to do it now, argues Christopher Mason in his superb ‘The Next 500 Years’. The one thing we know for sure is that sooner or later all life on Earth will inevitably come to an end. Whether this is caused by climate disaster, war or the death of the sun in a few billion years, to avoid extinction humans will need to find a new home planet, almost certainly in a different star system. In his extraordinary and thought-provoking book, Mason argues that we actually have a moral duty to do that. Not only that, as the only species aware that life on Earth has an expiration date, we have a responsibility to act as the guardian of all life. The only problem is that if we just sit around and wait to find a planet suitable for us, we could run out of time. So, we’ve got to start figuring out ways of changing our physical ability to adapt to potentially hostile new conditions – radiation, acidity, extreme temperatures – in a process called synthetic biology. Can we do it? Mason argues that the same capacity for technology innovation that has enabled us to build rockets and land on other planets can be applied to redesigning human biology so that we can live on other planets. And so, he puts forward a remarkable 500-year plan for creating the most massively ambitious project of re-engineering human genetics for life on other worlds. Brilliant. 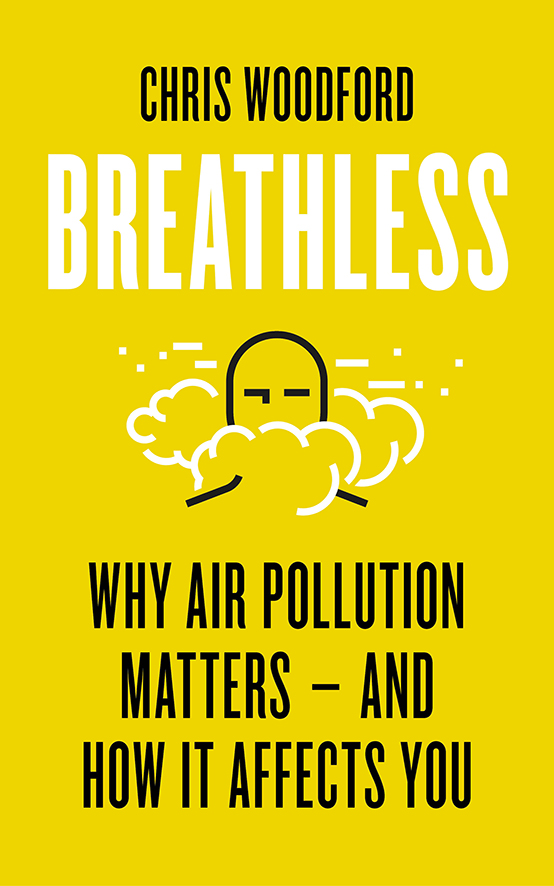 ‘Breathless: Why Air Pollution Matters – and How it Affects You’, Chris Woodford, Icon Books, £14.99, pb

Air pollution is one of the biggest environmental threats we face today and one of the most significant causes of premature death, and so it comes as no big surprise that there is an overwhelming mass of data, science and

statistics to go with that. Help is at hand though in the person of popular science author Chris Woodford, whose ‘Breathless’ sets about sifting and winnowing, crunching and sieving all these numbers and repackaging them in a highly readable and entertaining (if some-times frightening) book. If you think air pollution is a recent phenomenon, it’s important to realise says Woodford that “pretty much ever since humans discovered fire, air pollution has been an issue.” Little known fact: we take a  deep breath 20,000 times a day, and reasonably enough we assume that the air we breathe is life-sustaining. It’s an assumption questioned and examined by Woodford, who shoots from the hip. In Delhi, toxic smog is so bad for you that you might as well be smoking 50 cigarettes per day. There are 15 cities globally where if you were to exercise outdoors, you’ll be doing yourself more harm than good because of the air pollution. Even in cities such as Paris, London or Rome, exposure to ‘fresh air’ is the equivalent of two or three gaspers. Air pollution, says Woodford, is a much bigger issue than most of us think. Taken together, indoor and outdoor pollution present the most significant health threat, second only to high blood pressure. ‘Breathless’ provides the facts about air pollution in our everyday lives: its causes, effects and, crucially, what can be done about it both at individual and national levels. 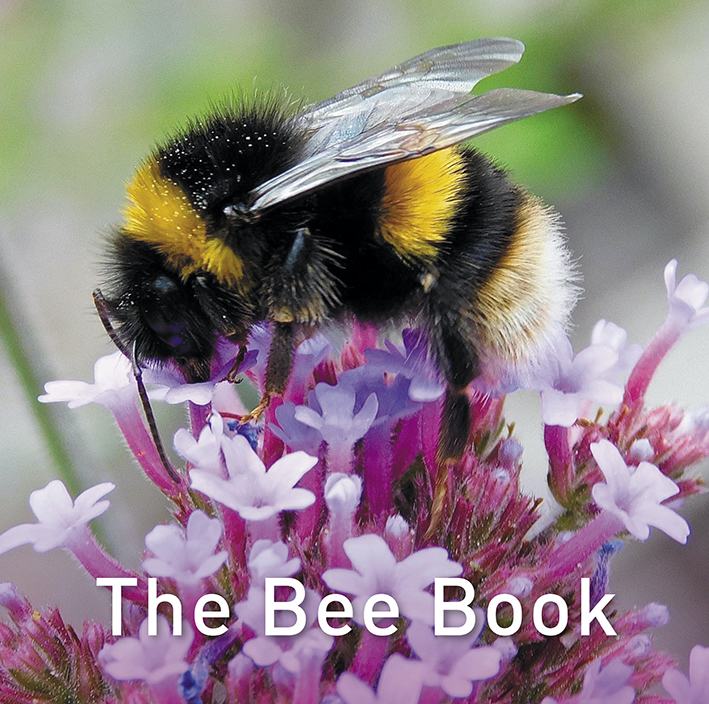 There is something irresistible about Graffeg’s natural history series of small, square, colourful and beautifully produced books. And ‘The Bee Book’ is no exception, with author Jo Byrne doing a fabulous job of bringing before the reader everything you ever wanted to know about this fascinating, endangered and often misunderstood insect. For some of us, the bee (in fact there are something like 250 different types of bee in the UK alone) is a freak of nature, getting airborne in defiance of the laws of engineering. Not true, says Byrne. This misconception has been with us for decades. Flapping their wings at a frequency of up to 11,000 times per minute in a carefully choreographed sequence of movements, they create a ‘dynamic stall’ and a vortex: and up they go. Science. There will be those of us that are afraid of them. We fear their sting, and yet the chances of a honeybee making an, ahem, beeline for you are so slim as to be negligible. If it stings you, it’s going to die – doesn’t make sense. We admire their ability to construct complex communities, and without honey, we’d have had little to sweeten our world before processed sugar came along, and I know which I prefer. They keep the world’s plants pollinated and their lifecycle is one of nature’s best soap operas. Let’s face it, they’re fantastic. And yet they’re under threat, mostly because humans don’t value them enough. Read this book and it will change the way you look at bees for ever. 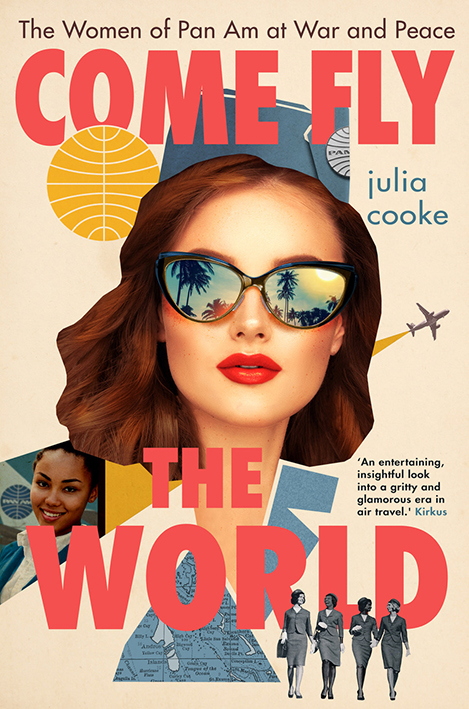 Welcome to the world of travel writer Julia Cooke’s extraordinary portrait of the Pan American World Airways – or simply good old ‘Pan Am’ – stewardesses in the Mad Men era. While some will see that time as one of frighteningly embarrassing lack of political correctness, others (including this reviewer) will openly weep with nostalgia for the glamour, the sense of danger and the dawn of ‘women’s lib’ (put in inverted commas here because it’s going to offend someone, but that’s what it was called.) In the so-called Jet Age, Pan Am literally offered young women the world, an opportunity to broaden horizons, get a foothold in the job market and (let’s just get it out there) look a million dollars at the same time. In her richly entertaining and inform-ative ‘Come Fly the World,’ Cooke tells the story of the stewardesses who served on the iconic airline from the Swinging Sixties to the economic doldrums of the mid 1970s. She gets behind the scenes and lifts the lid on the unseen diplomatic role they played on the world stage. Alongside those fashion-blazing uniforms was real danger, flying soldiers into and out of the war in Vietnam, as well as staffing Operation Babylift – the dramatic evacuation of 2,000 children during the Fall of Saigon. Cooke’s narrative brings together the true stories of women such as Lynne Totten, a science major who decided life in a lab was not for her, to Hazel Bowie, one of the relatively few African American stewardesses of the era, as they embraced the liberation of a jet-set life. In the process, Cooke shows how the sexualised ‘coffee-tea-or-me’ stereotype was at odds with the importance of what they did, and with the freedom, power and sisterhood they achieved. 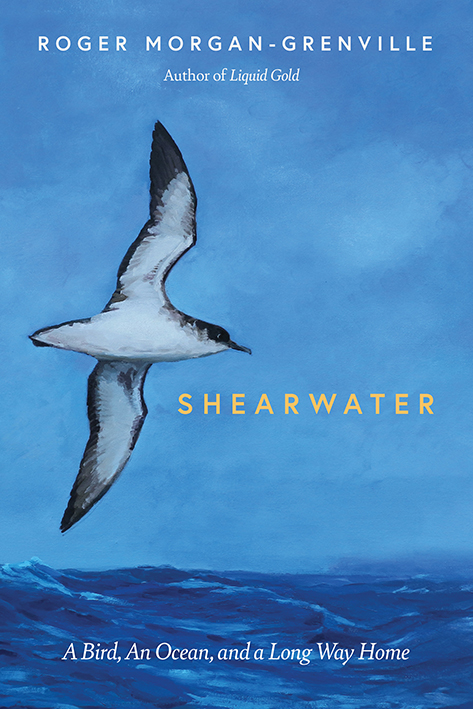 Ten weeks into its life, a Manx shearwater chick will emerge from its burrow and fly 8,000 miles from the west coast of the British Isles to the South Atlantic. It will be unlikely to touch land again for four years. It’s one of those wonderful stories that can only originate from Mother Nature, and it’s one that has fascinated author Roger Morgan-Grenville for more than half a century. Now, he’s gathered his thoughts and penned a remarkable volume to follow his memorable ‘Liquid Gold’, a similar sort of book in a way, (only about bees and honey) that was so well received by the critics that one was moved to comment: “it is a book that ignites joy and warmth.” Which, oddly enough, is my precise reaction to ‘Shearwater.’ Part memoir, part natural history, part homage to the wilderness, the book’s subtitle will tell you pretty much all you need to know: “a bird, an ocean, and a long way home.”

For Morgan-Grenville, a soldier in the 1970s and 80s who later helped to establish the Help for Heroes charity (in fact, he was their first fund raiser), writing such a lovely book must have been a real change of pace, as he deconstructs the science behind the extraordinary voyage of the shearwater. As he goes along with his tale, he weaves in personal threads of autobiography, such as the inspirational influence of his Hebridean grandmother, who the author has to thank for his deep-seated and long-standing love of wild places and their animals. Morgan-Grenville writes with a light touch and ‘Shearwater’ is delightful.