Liz Hinds is trying to master the Welsh language with varying degrees of success – the things we do for our grandchildren!

For the last year I have been doing an on-line Welsh course. Just about every day I’ve logged on and practised so you’d think I should be fluent now, and I would be were it not for the fact that what I learn next week will overwrite in my brain what I learned last week.

Is it age? Am I destined to never finish my course because I have to keep going back and starting again? Or is it just me?

There’s a famous story about a group of poorly-educated wanderers who suddenly found them-selves able to speak in languages that could be understood by people from all over. I tell you, I could do with a bit of that supernatural ability.

Although the story doesn’t mention if there were any Welsh speakers in the audience. Speak-ing Persian, Greek, Aramaic, was no problem, but even God drew the line at Welsh mutations.

And, while I’m at it, why are there so many different ways to say yes? Can’t I just nod?

But back at the beginning of lockdown doing something productive was the thing to do.  Social media was full of encouraging ideas to keep us active and happy, and I decided it was a great opportunity to learn Welsh so I could read stories to my grandson who was attending a Welsh medium school. That was last year. This year he’s moving to Italy.

No, no, no, I’m not going to learn Italian. My brain is fogged enough as it is. I did try once before. I can ask where the bathroom is but other than that my communication on the continent is largely limited to smiles, nods, and a befud-dled look.

So why am I persevering with Welsh? Because there’s been a change in my motivation: now I want to learn it for me. I want to speak my language. A better-late-than-never awakening of my Welshness, my pride in my heritage.

Everyone knows Henry VIII had six wives but how many people know that it was his idea to incorporate Wales into England and make English the sole official language?

For hundreds of years before 1536 Welsh had been the language of culture, law and everyday life in Wales. 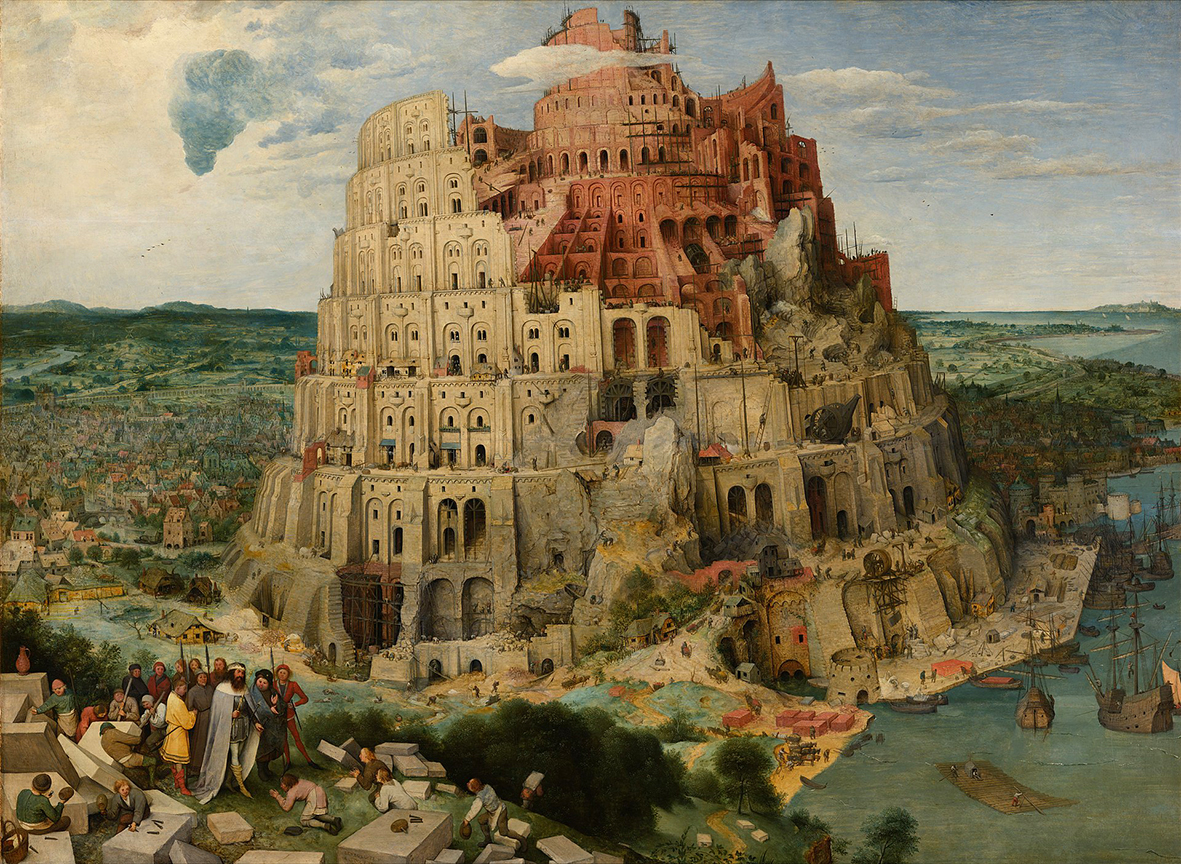 The Tower of Babel – painting by Pieter Bruegel the Elder

Which does raise the question, ‘Why would people living on the same small island speak a different language anyway?’

The story in the bible is that after the flood Noah’s descendants all spoke the same language. Then they decided to build a tower to reach the heavens. (That was the famous Tower of Babel from which Douglas Adams got the Babel Fish for Hitchhiker’s Guide.) God saw this as being a bit cocky and confused their language so they wouldn’t be able to work together and get these high-faluting ideas. It doesn’t do to mess with God.

Actually, thinking about it, even with a common language it’s easy to misunderstand others. I was speaking in Zac’s once and mentioned the rubber on the end of my pencil and couldn’t understand why there was sniggering …

Across the world humans speak 7,111 languages. There are a couple of theories about how they originated but, even if everyone spoke the same language initially, the nomadic nature of mankind plus environmental influences – the environment in which a language is spoken is key – allowed its organic development. I could go on and bore you but I’ll get back to what I wanted to say.

Language can help or hinder communication, and can be used deliberately to do either. And what we want to say we may not for all sorts of reasons.

Unlike people, God is very easy to talk to, to be honest with – there’s no point lying or putting on a show as God knows our hearts – but many of us were led to believe that only the priest can speak to God or that we have to use fancy language if we want him to understand. That’s not what Jesus says.

When he taught his disciples to pray he said, ‘Call him father, talk to him about the everyday aspects of life you are grateful for or struggle with.’ Nothing too complicated about that.

God, of course, understands us whatever language we speak, and he even understands when we can’t find words. In his letter to the church at Rome Paul wrote: We do not know what we ought to pray for, but the Spirit himself inter-cedes for us through wordless groans. The poet, Carol Ann Duffy, wrote something similar: Some days, although we cannot pray, a prayer utters itself.

So even when we are so distraught we can’t pray or when something so terrible is happening we don’t know what to pray for, it doesn’t matter. Sometimes – quite often – my prayer is a single word, ‘Help!’

God hears, he understands, he answers.