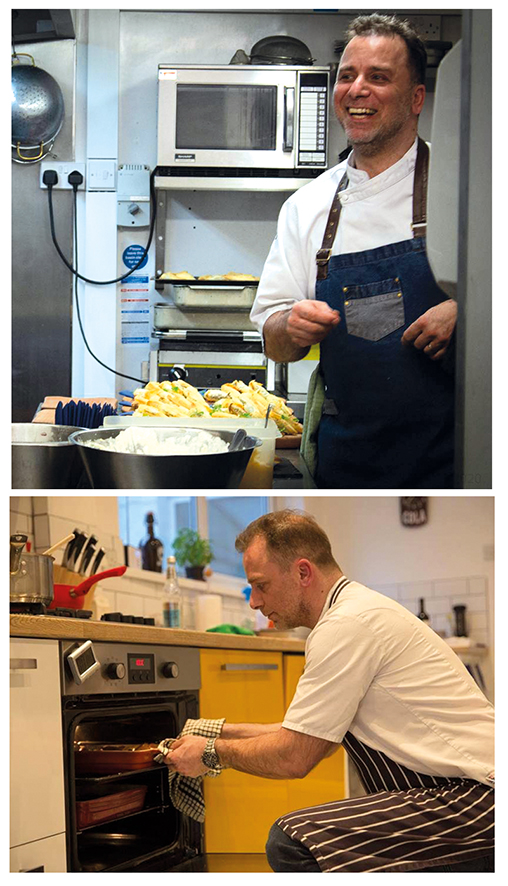 We are delighted to welcome private chef Christos Georgakis on board this month. Christos will be introducing us to authentic Greek dishes as well recipes from other cuisines in future issues. Christos is a highly experienced chef who in 2008 was a semi-finalist in both Masterchef the Professionals and Welsh Chef of the Year, he also won the award for Best Pub food in Swansea for the Kind Arthur and in 2007 while Head Chef at Maes Yr Haf, it was acknowledged as one of the best ten restaurants in the UK.

During lock down Christos has been providing freshly prepared family meals that simply need to be reheated in the oven, as well as his highly popular themed evenings of authentic Italian pasta and traditional pies.

Christos is available as a private chef, dropping off dinner party meals to your door that simply need to be heated. As we go to press, further updates are expected from the Welsh Parliament that will allow Christos to return to cooking in your home.

Employing a private chef may sound very grand, but for just £45 per head, Christos will come to your home and cook a restaurant quality meal of your choice. As soon as we are able to socialise with our friends in our own homes this will be a great alternative to eating out. 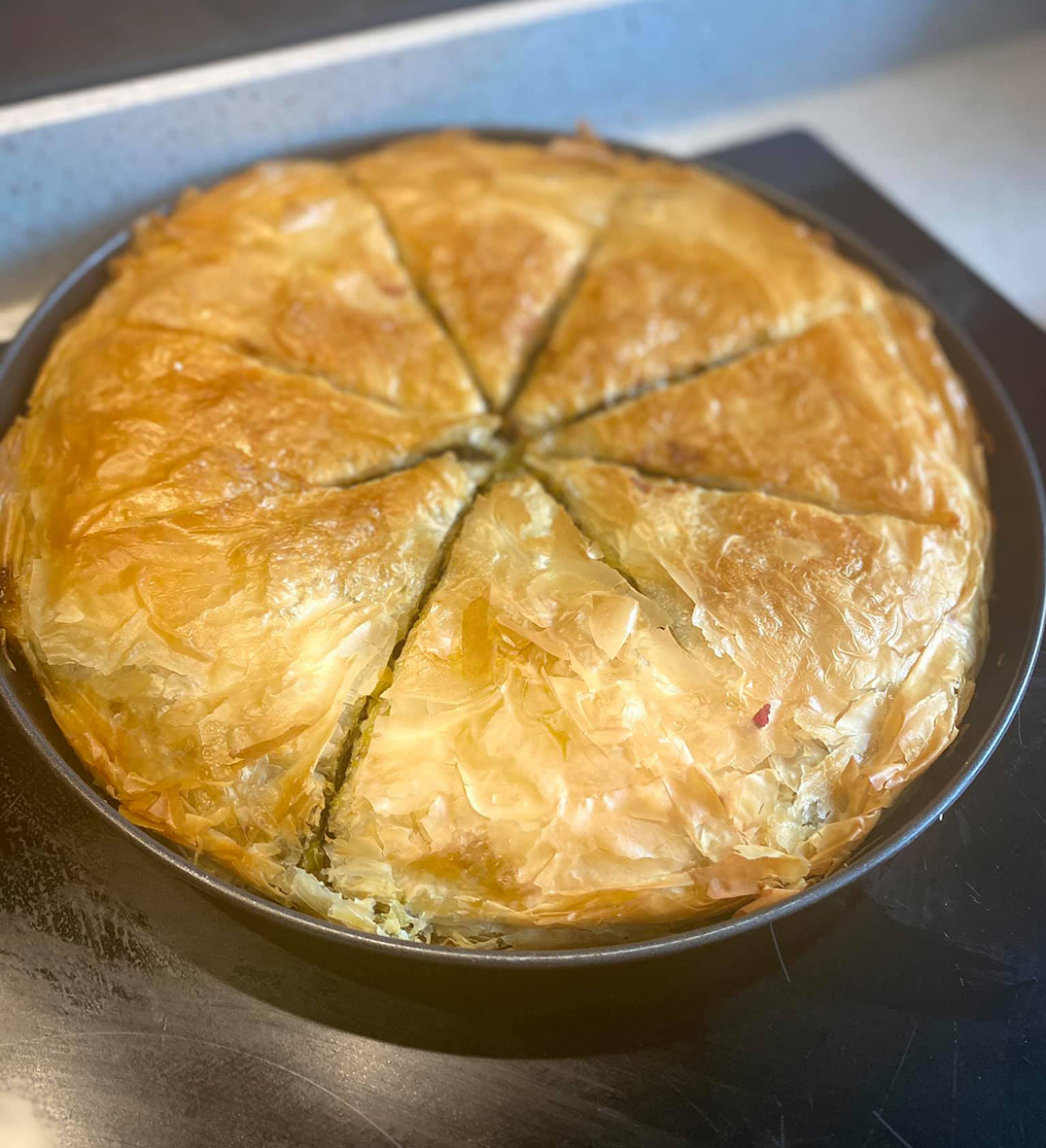 This month Christos introduces us to a traditional Greek pie that can easily be tweaked to cater for a plant based diet.

Everybody knows the famous spanakopita also known as spinach pie, but what you may not know is we’ve got a similar pie which mostly consists of horta (wild green leaves). It’s one of the secrets of the Greek diet; various greens combined with fresh herbs and tangy feta cheese in layers of phyllo dough.

The consumption of greens, especially wild, are good sources of antioxidants and omega-3 fatty acids. Horta translates as grass in Greek, we’ve got around 80 varieties of horta growing wild in the mountains.

For this recipe you can use red chard, curly kale, cavelo nero, green leaves from beetroot etc. basically anything you find at the food markets or supermarket that is green you can add it to the pie.

For this recipe I’m using an 8-9 inch round pie dish or you can use a rectangle pie dish.

I prefer to use a country filo pastry as it’s got a more authentic flavour, you can buy it online or use normal commercial filo pastry. You can also make this a vegan version without feta and egg.

1. Preheat the oven to 200 °C/Fan 180°C. 2. Trim the tough stems from the greens, chop or shred them, and wash them thoroughly. Spin them through a salad spinner if possible to rid them of as much water as possible. 3. Heat 2 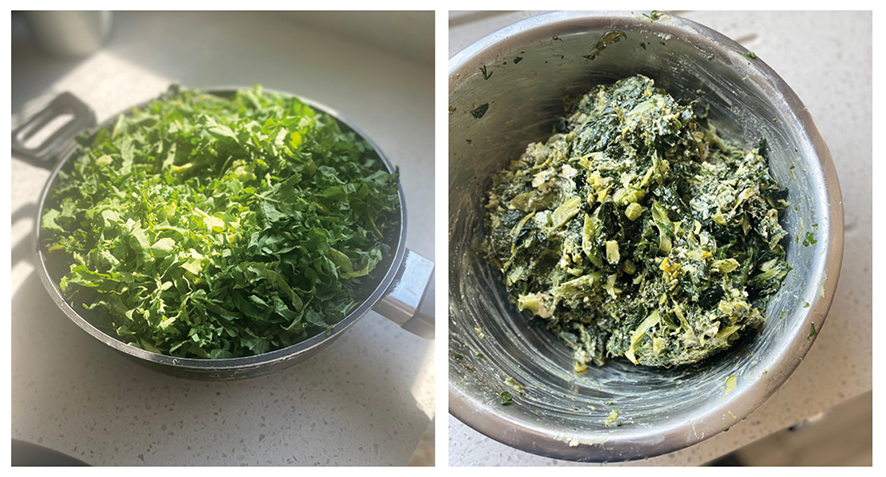 tablespoons of the olive oil in a large sauce pan and sauté the leeks, onions and spring onions until wilted and crunchy. Empty them into a mixing bowl. Add some olive oil to the sauce pan and add the greens. Toss frequently, until wilted and as much of their moist-ure as possible has evaporated, 7 to 10 minutes. Remove and place in the mixing bowl.

Mix in the rest of the ingredients and mix well.

Before you begin assembling the pie, unroll the thawed phyllo (filo) sheets and place them carefully between two ever-so-slightly damp kitchen cloths. This helps the sheets remain pliable so they won’t tear too much.

If you like it extra crispy, don’t brush but sprinkle!

If you want the filo to be extra crispy sprinkle the olive oil over the filo sheets, rather than brushing them. This will leave some areas uncovered which will make them crisp up faster.

You will need 5 filo sheets to start. 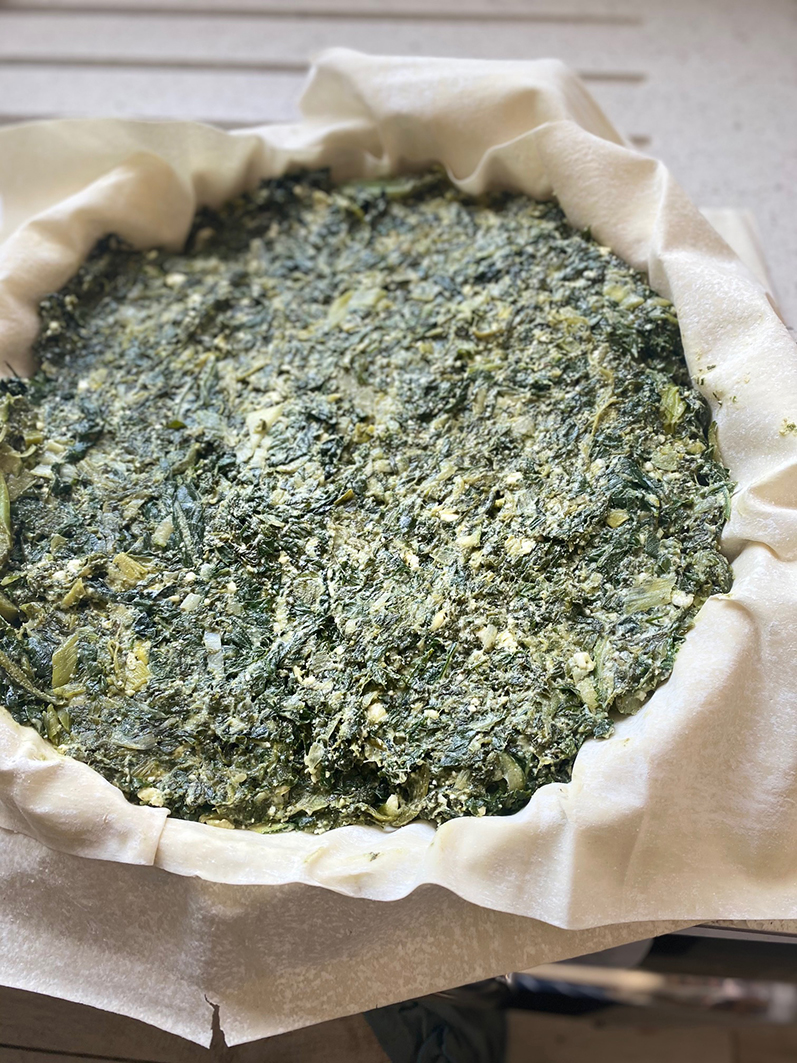 Put the first sheet of filo in the baking dish and sprinkle with oil, letting the excess hang over the sides. Keep going with the rest of the sheets, turning a little before adding each additional pastry sheet and sprinkle all over with oil. When all the pastry sheets are used up, tip in the filling of the hortopita and fold over the excess pastry to cover.

Brush the top of the hortopita with olive oil and score with a sharp knife. Bake in preheated oven for about 30 -45 minutes until the filo is crisp and golden.

Remove and cool slightly before cutting. Serve warm or at room temperature.