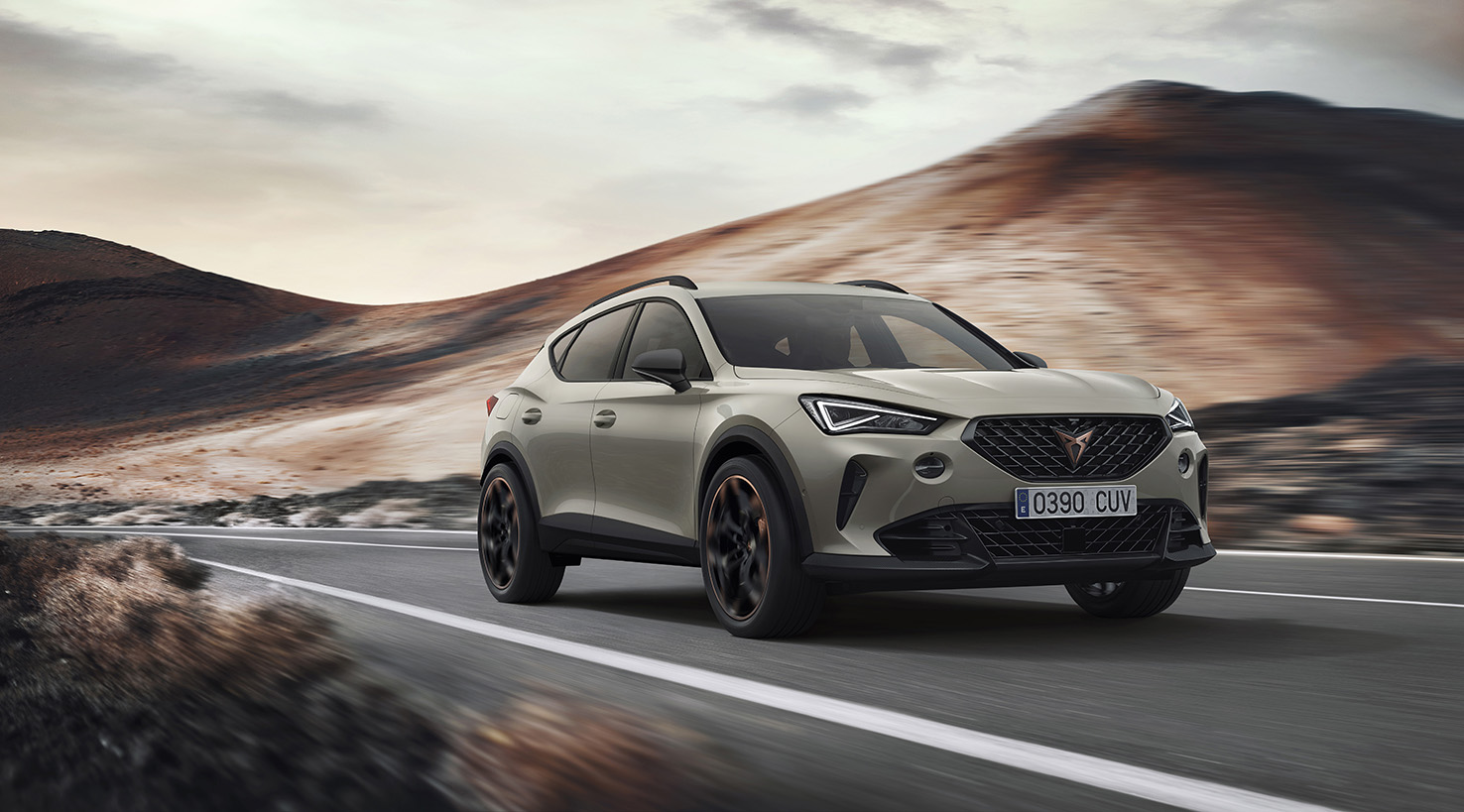 As he gets to drive some of the most luxurious cars on the market, Liam Bird is used to turning heads, but last month he was attracting puzzled looks as the badge on the grille of his test-drive car was unfamiliar.

“Excuse me. We were wondering what car it is you’re driving, we don’t recognise the badge”. Judging by the number of looks I got – or was it the car – the couple who so politely enquired as to the make and model I was driving, weren’t the only ones perplexed by the badge on its grille.

“It’s a Cupra Formentor” I replied. Funnily enough, they still looked confused. And to top it all, it actually doesn’t say Formentor anywhere on the Formentor! 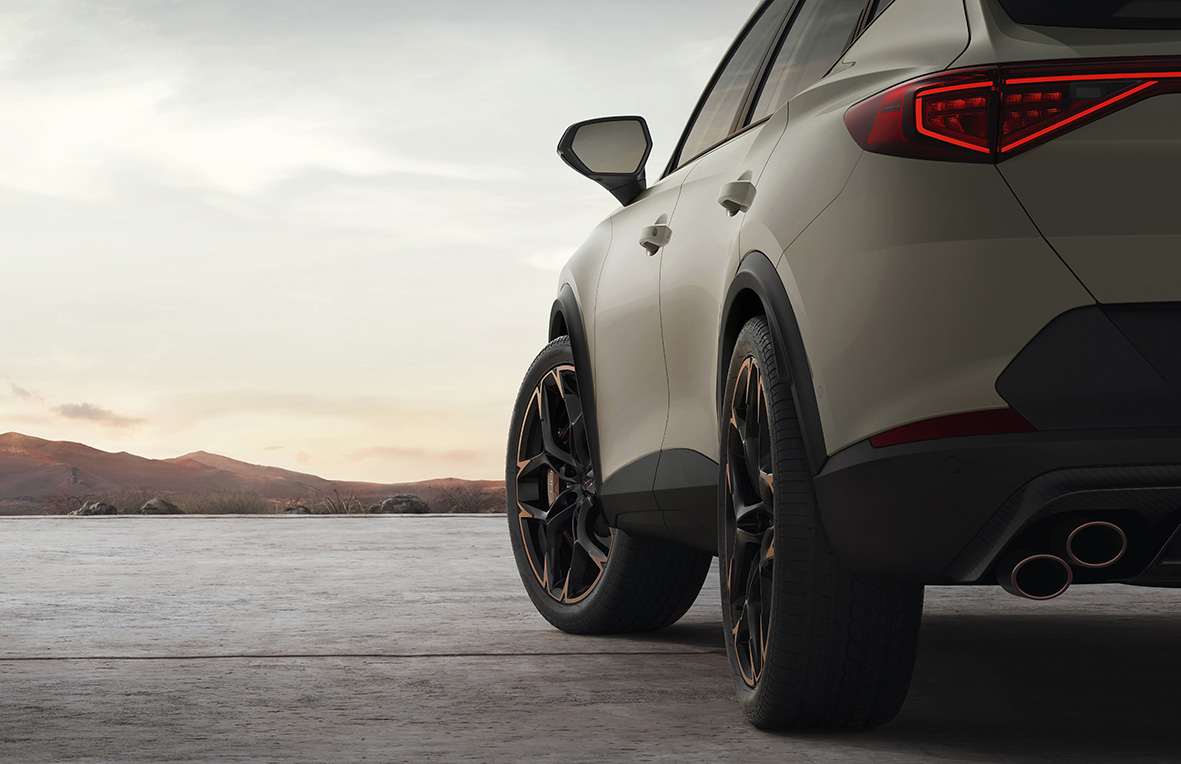 Cupra is to SEAT – the fun, sporty, Spanish, Auto Emocion sloganed member of the Volkswagen Group – what DS is to Citroen, Lexus is to Toyota, and Infiniti is to Nissan, i.e. it is their upmarket – and mostly-electrified spin off brand. And this, the Formentor, is Cupra’s first bespoke model. Cupra do also have their own version of the Ateca, SEAT’s family-friendly SUV, and very good it is too. Nevertheless, this is the first time the relatively new brand gets a new model to truly call its own.

No surprises perhaps that the Cupra Formentor is an SUV, they are after all what sells by the bucket load these days. On the other hand, does the Formentor’s coupe/hatchback-on-stilts styling mean it’s technically a cross-over? I’ll let you decide. What I can tell you is that in the metal, the Formentor is actually quite a handsome thing. If anything, on first impressions it reminded me of the Lamborghini (they also of VW owner-ship) Urus (also a sporty SUV).

Perhaps that’s because once your past collecting your thoughts about the Formentor’s creased, curvey and muscular bodywork, you’ll no doubt recognise a host of its fixtures and fittings – not to mention, when you get to them, some of the oilier bits too. Indicator and wiper stalks, electric window switches, touchscreen complete with touch-sensitive pads rather than good-old knobs or switches (why?), they’re all VW items, so too the stubby gear selector. The steering wheel, flat-bottomed and ironically festooned with buttons – unlike the dash-board – might well be an Audi item – I’m sure I may have seen it in the aforementioned Urus too. 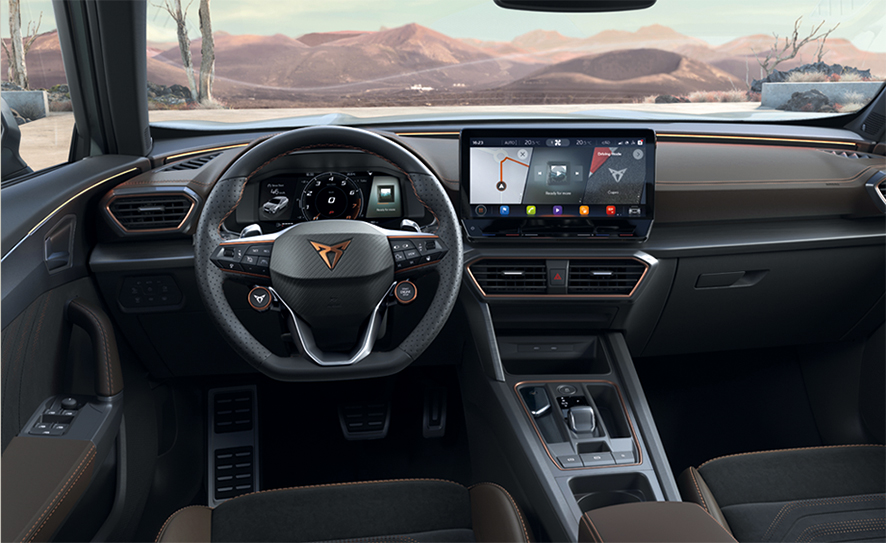 There’s plenty of room inside for both passengers fore and aft, and with its rear seats folded, plenty of load space too. It is a bit dark though. Still, amber/bronze mood lighting that also doubles as the blind-spot warning system is a nice touch. There’s also the option of controlling heating, navigation and radio with voice commands. But having to say Hola-hola first in order to do so makes you feel as awkward as you did in your GCSE Spanish class – and before you ask, it won’t rustle-up dos Cerveza either.

Fortunately, there’s nothing awkward about the way the Formentor drives. It’s based on the same MQB platform as many-a-VW product, and also benefits from the same 306 bhp engine, 7-Speed DSG gearbox (all Formentors are autos), and four-wheel drive system as the Golf R. Needless to say then the Formentor is decidedly fleet of foot. Quite where or when you’ll be able to ascertain whether its top speed is electronically limited to 155mph as Cupra claim, I really don’t know, but the ability to dash from 0-62mph in 4.9 seconds means you’ll never be last away from the traffic lights or school gates again.

If that is, you remember to select something other than Comfort from the Formentor’s driving four modes: Comfort, Normal, Sport, Cupra. As good as, and silky smooth as the DSG gearbox is, it can get caught napping sometimes – especially so when set in its most economy conscious setting. Another niggle is the ride.The Formentor is unashamedly a sports SUV, it grips like a limpet, it has bucket seats, there’s piped engine noise through the speak-ers (yes, really), and you sit lower than you might have imagined too, but you also get huge alloy wheels and very low profile tyres. Alas, those rims are to ride comfort what The Crazy Frog was to popular music. 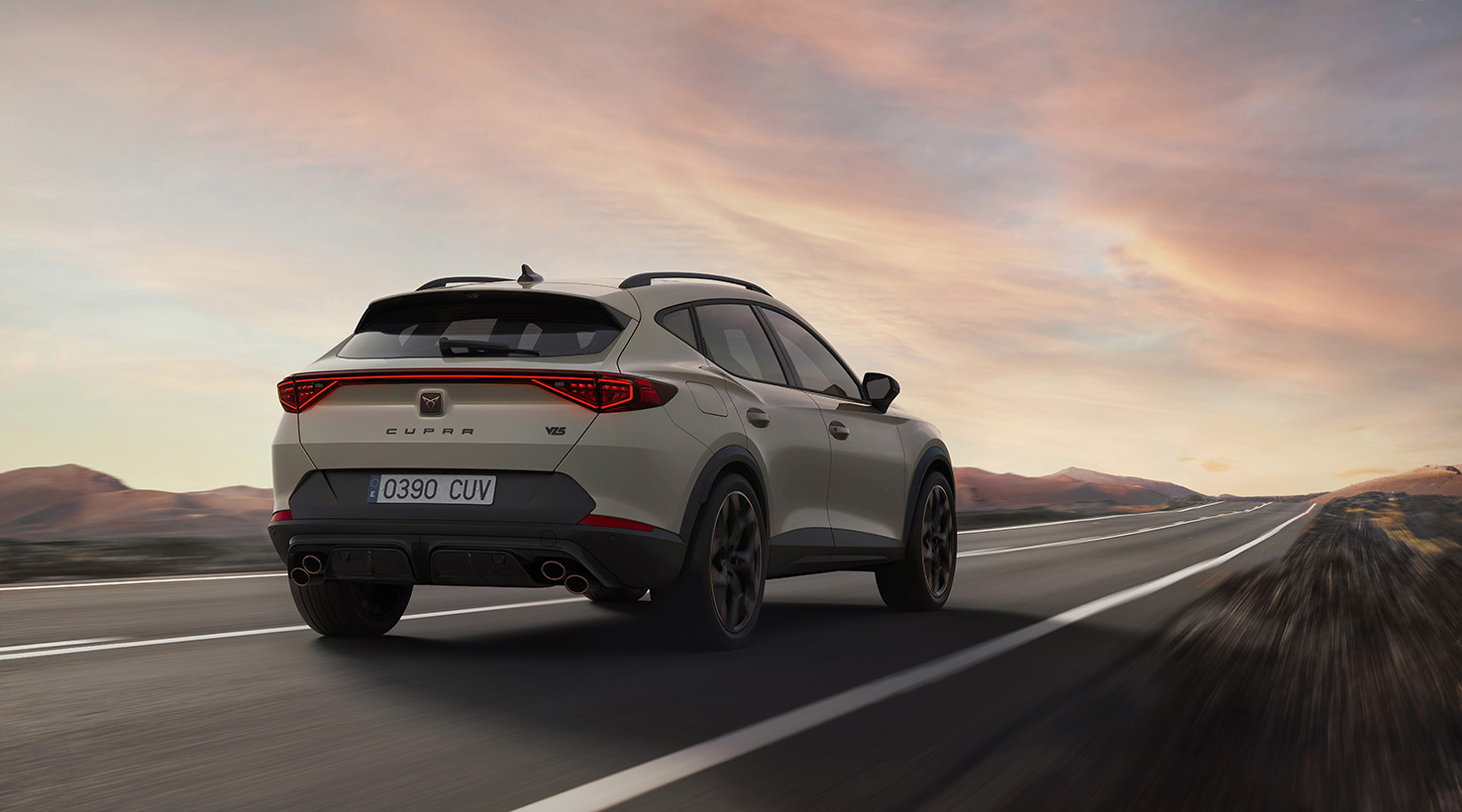 So then, to sum-up. The Cupra Formentor is a well built, family orientated, sports SUV, that also drives well, can be had in plug-in hybrid form, and boasts the kind of four-wheel drive that’s distinctly more snowy driveway than it is Serengeti or Sahara. It looks good, it’ll do over 30mpg on a long run, and is capable of show-ing a hot-hatch or two a clean set of heels. But, so will a host of other sporty SUV’s that can no doubt be “purchased” for a similar PCP fee.

There’s nothing really new here. But, the Cupra Formentor gets a badge that’ll have the neighbours wondering what you’ve bought for weeks on end. Can you really put a price on that?