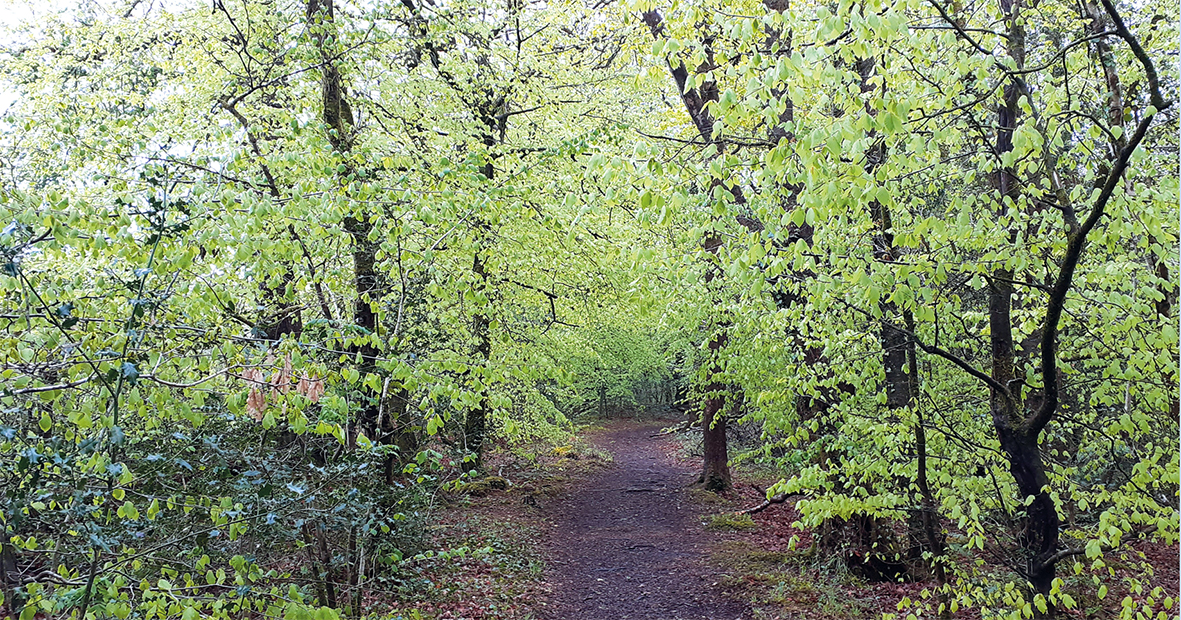 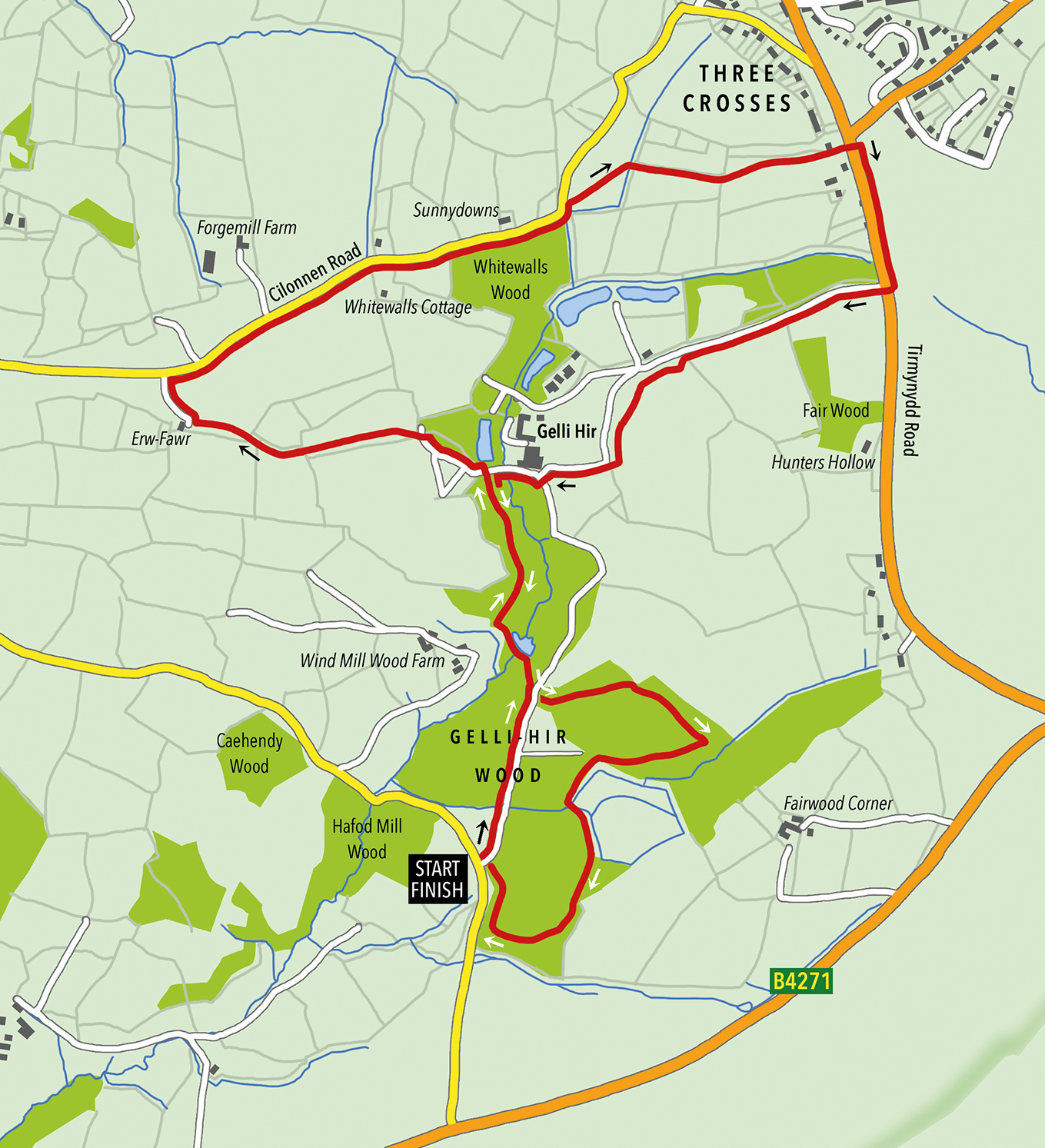 After we’d been liberated and allowed to leave the immediate area, it seemed a good idea at first to spread our hitherto clipped wings and plan a route a bit further afield.

However, Gower seems to have an allure all of its own and one that often proves impossible to resist. So, following a suggestion from a number of friends I’ve chosen one right on our doorstep and in an area that is relatively unknown – Gelli Hir Woods. We all know that we have some of the finest walks in the whole of the country, but whilst this little gem is quite modest in comparison it is massively satisfying nevertheless.

It’s a cracking little walk, not that long some of you will be pleased to learn, but so rewarding. The views are not that spectacular either, but the satisfaction is gained by the experience of feeling a lot closer to nature. In all the walking guide books I’ve read covering Gower, I can’t remember ever seeing Gelli Hir mentioned*, let alone featured, no doubt overshadowed by all the other iconic routes in the area. But maybe that’s the beauty of it – it’s the element of surprise and the satisfaction of discovering a new place. 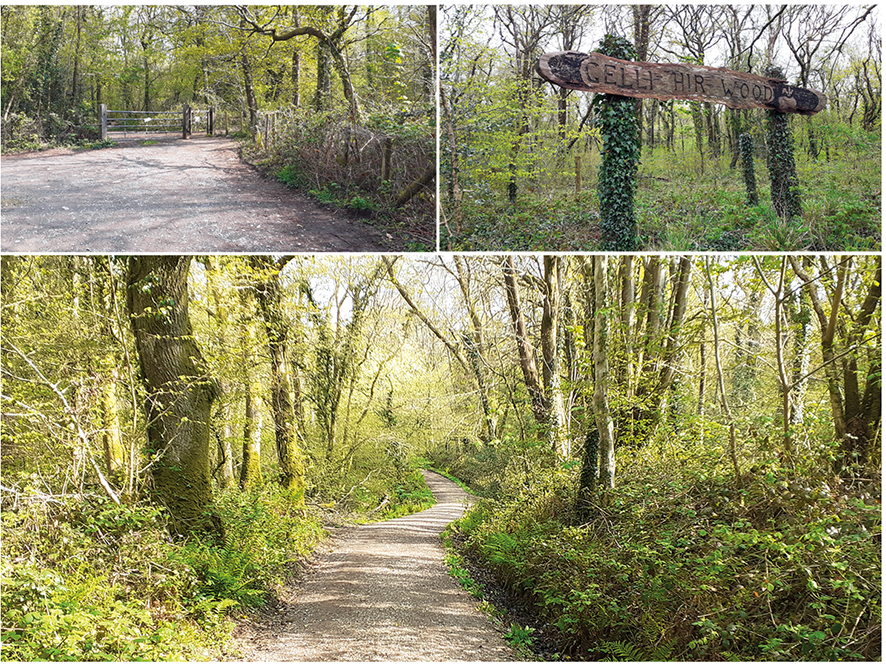 Clockwise from top left: Through the gate at the main entrance / Welcome sign to Gelli-Hir Woods / Follow the wide track through the woods

Leave the B4271 a mile or so after the turning to Three Crosses and signposted Cilonen. After about 1/4 of a mile and after you cross a cattle grid, the entrance to the nature reserve is on the right. There’s barely enough space to park 4 cars here, but there is a small layby on the main road for overspill. I spoke to a few people in the car park and what’s obvious is that it has a small band of very enthusiastic and regular visitors, and whilst they seem keen to share their secret, when all said and done, they’d really like to keep it to themselves. So, don’t tell anybody, ok? 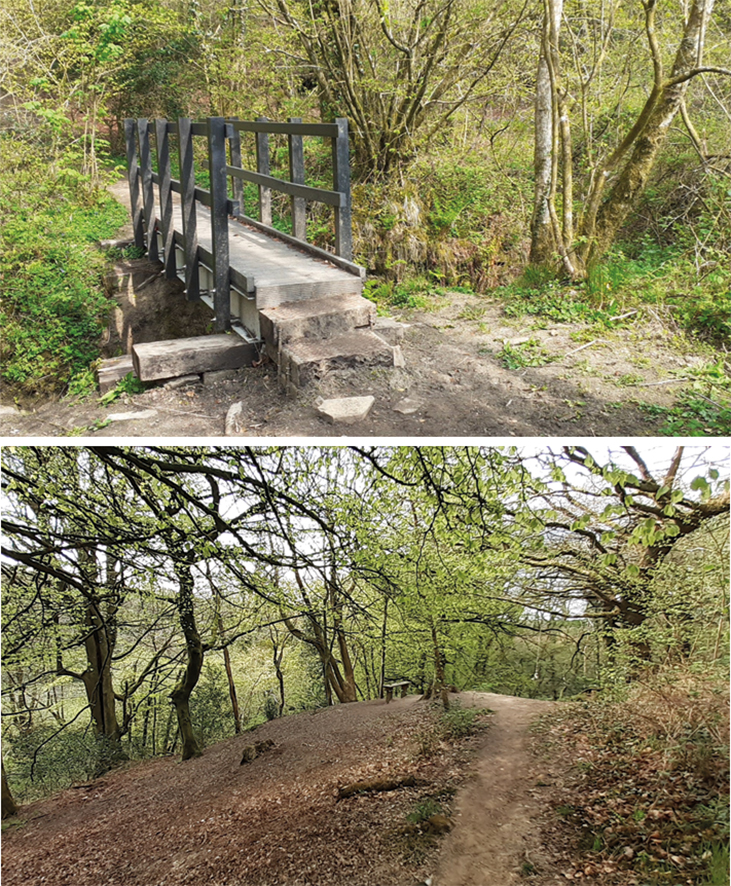 Top: Over the second bridge Above: Ascend the gentle slope overlooking the stream

Go through the gate then, and along a wide track through the woods. Immediately, the silence hits you, punctuated only by birdsong and the sound of your own footsteps. You get an immediate sense of being in nature’s realm – maybe that’s the effect a wood has on the body and spirit and the feeling is palpable. Look out for oak, birch and willow to the south and ash, sweet chestnut, sycamore and beech woodland in the north and west. And walking in a woodland environment has its own health benefits too, both physically and mentally, and after the year we’ve endured I think we all need it. I’ve seen it described as a ‘Green Prescription’. I’m often criticised by my walking partner of rushing along, not really paying that much attention to the surroundings, regarding it more as a physical challenge than anything else. But this place demands that you take your time and savour the environment. This partly ancient woodland of around 28 hectares, was acquired by The Wildlife Trust in 1967. The area to the west of the main track is considered ancient woodland whilst most of the woodland to the east was probably planted in the late 1800s. Fallen trees and stumps encourage an abundance of lower plants, invertebrates, nesting birds and fungi, and the wood also harbours a population of dormice.

As for the birdlife, I first have to apologise as my bird-song recognition skills aren’t great. I can pick out with ease the seagull, pigeon, cuckoo and budgie but as far as the rest are concerned I struggle. However, my visual recognition skills are a little better. I think I saw a coal tit, great tit and nuthatch, but definitely a chaffinch and a jay. It’s worth stopping for a while, as there are several strategically placed bird tables along the way where you can put birdseed down and see what comes along. 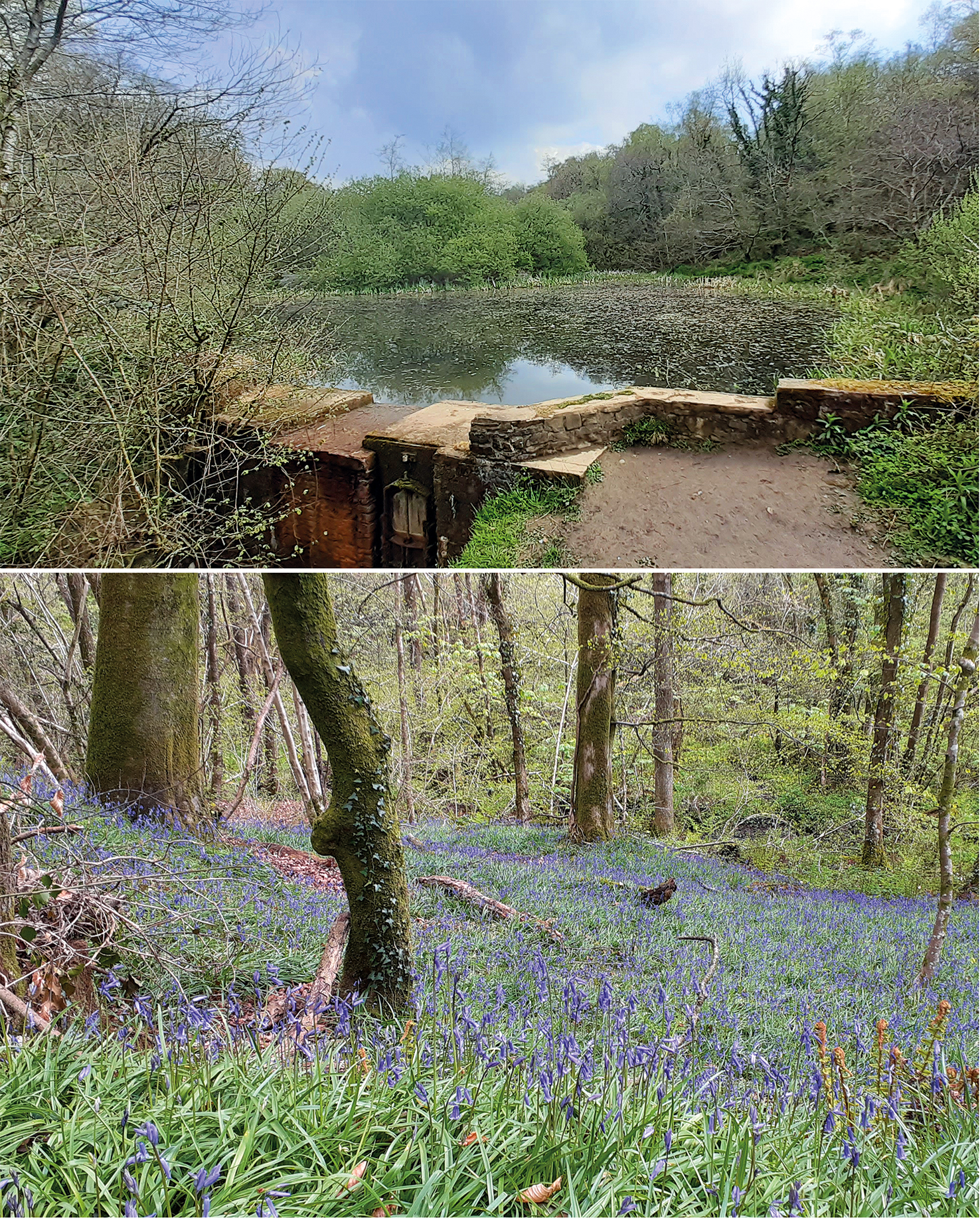 Top: The pond Below: Bluebells 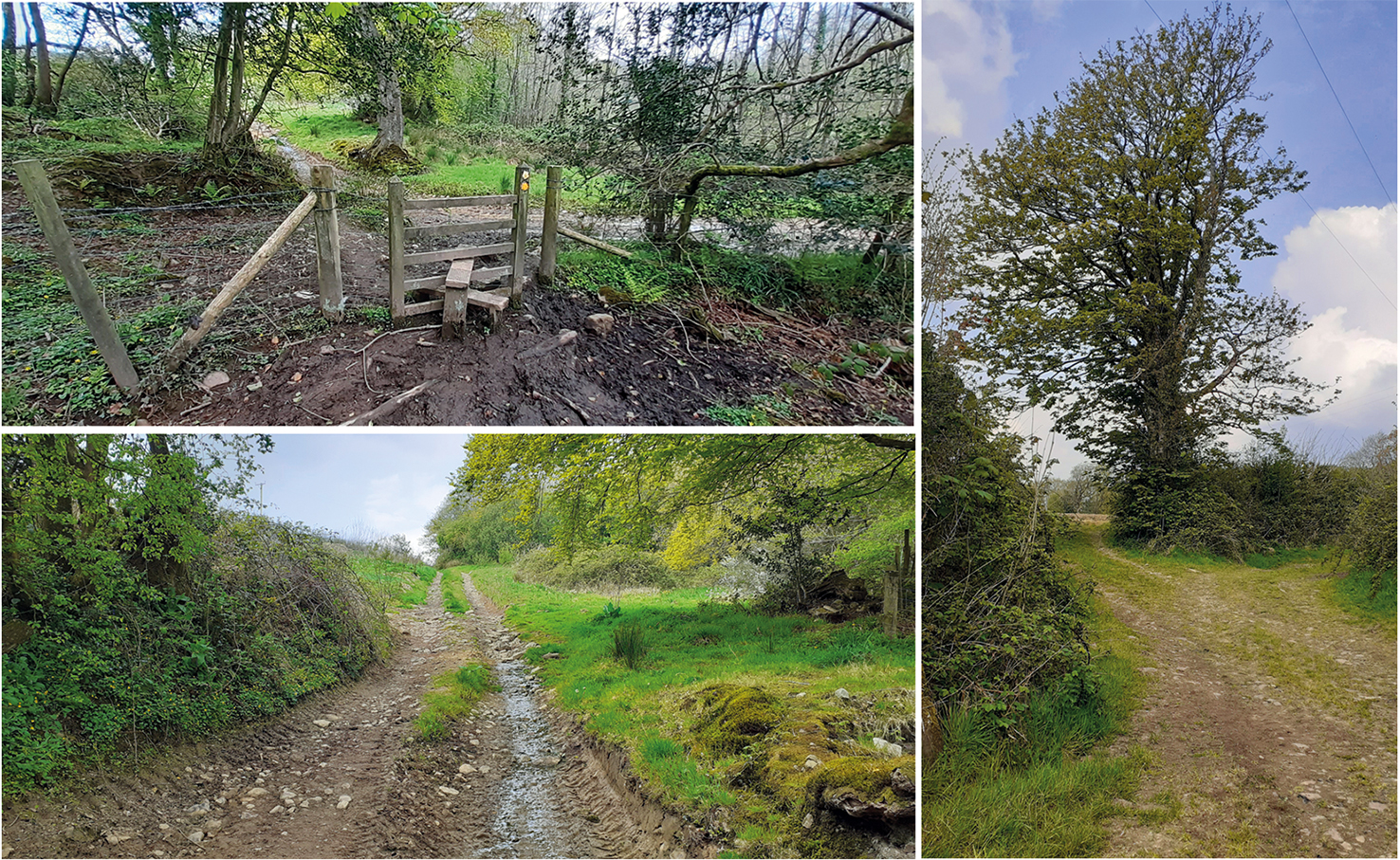 Clockwise from top left: Exit the wood via a stile / Take the left path next to the large tree / Follow the path up a slight incline after the stile

Continue on the track when after a few hundred yards you’re faced with a 3 way choice, select the one on the left which brings you to a pond which appears on your right. This pond which was only constructed in the 1990s helped by a grant from the Heritage Lottery Fund, is home to newts and tadpoles, which you can see at this time of year, and also mallards and moor-hens. Over the two bridges and ascend a gentle slope where the path then narrows; through the trees and you’ll be looking over the infant Ilston stream below. The day I did this walk, there was a beautiful carpet of bluebells on this stretch, but I’m assuming they will have died back by the time you read this. Carry on along this path until you exit the wood via a stile. Take an immediate left up a rough track and note that you will return to this point on the way back. After a short distance, you’ll be faced with a choice of paths either side of a large tree. You go left and into a ploughed field, keeping left at all times. Look out for a gate which exits the field ahead and slightly to the right, which takes you into the next field. Keeping to the right you’ll go through 2 stiles and a house appears to your left, join a track turning right and towards the Cilonnen Road. On reaching the road, turn right towards Three Crosses taking extreme care because you will encounter the odd vehicle. After about 1/2 a mile or so and where the road bears sharp left, look out for a marker to the right directing you into a field. 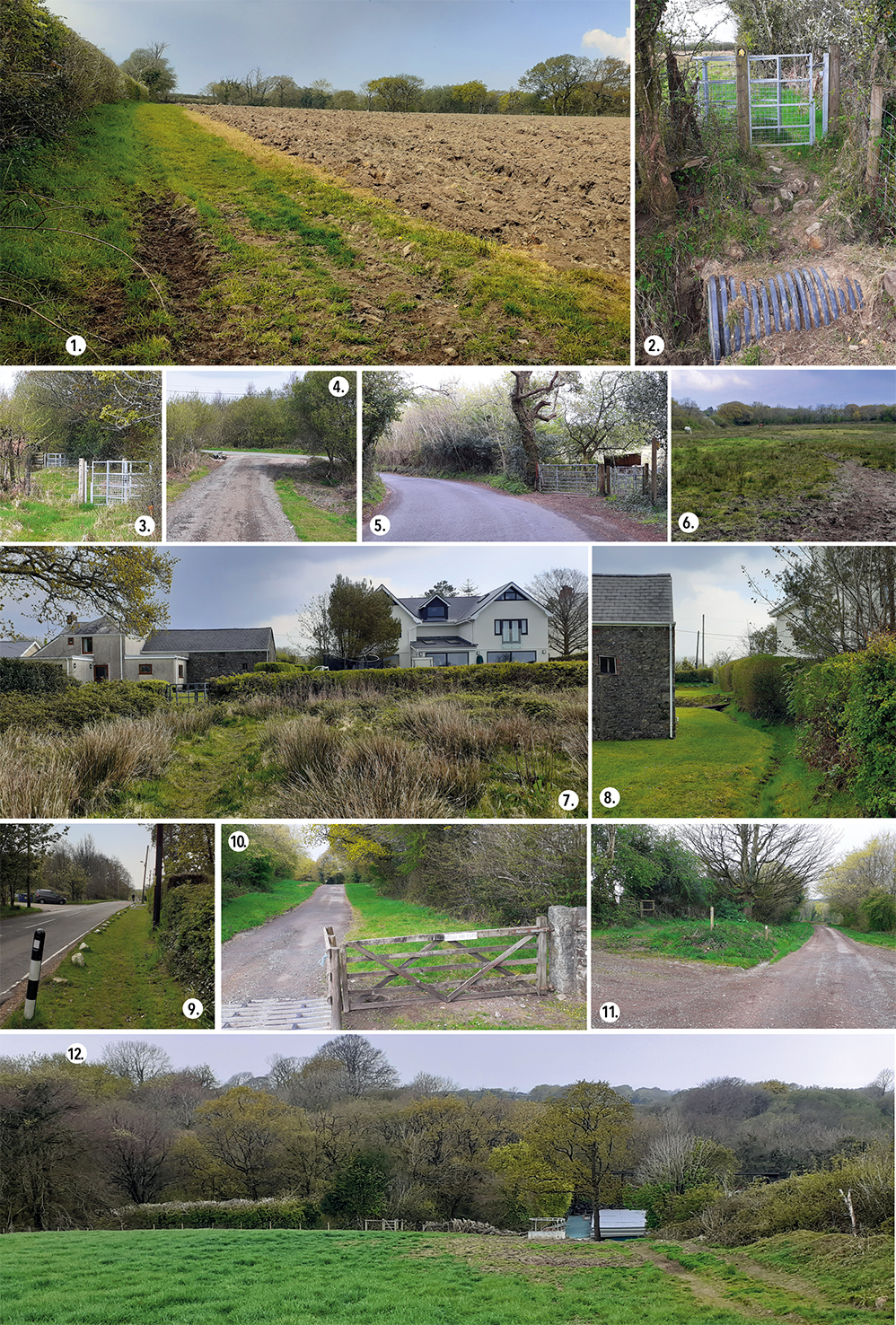 1. Enter the ploughed field 2. Gate that exits the field into the next 3. Go through 2 stiles 4. The track leading to Cilonnen Road 5. On Cilonnen Road before the sharp left turn look out for the marker on the right 6. Entering this field look for the exit diagonally to the right 7. Head towards the large white house 8. The right of way path through the garden 9. The main road into Three Crosses, Tirmynydd Road 10. Access to Gelli Hir Farm 11. Waymark sign on your left 12. Hug the fields boundary on your right until the stile

Once in it, look out for the exit which is slightly diagonally to the right. Go through the gate and into the next field keeping to the left. Exit the field via 2 gates and pick up the barely discernible path and head towards the left of the large white house ahead. Through the gate and into what is basically someone’s garden but it is a right of way, so you’ll be ok (I hope !!).You’re now on Tirmynydd Road, the main drag into Three Crosses, turn right, but again taking great care because this road is far busier. Over the cattle grid and just after the 40mph road signs turn right onto the access road to Gelli Hir Farm. Along the track and after about 400/500 yards look out for a waymark sign pointing to the left which takes you into the field where you hug the boundary on the right. Leave the field in around 400 yards on the right and through two stiles down a short slope and the farm is on your right. Straight on along the track, through a ford and returning to the wood through the stile you encountered earlier, to the left. 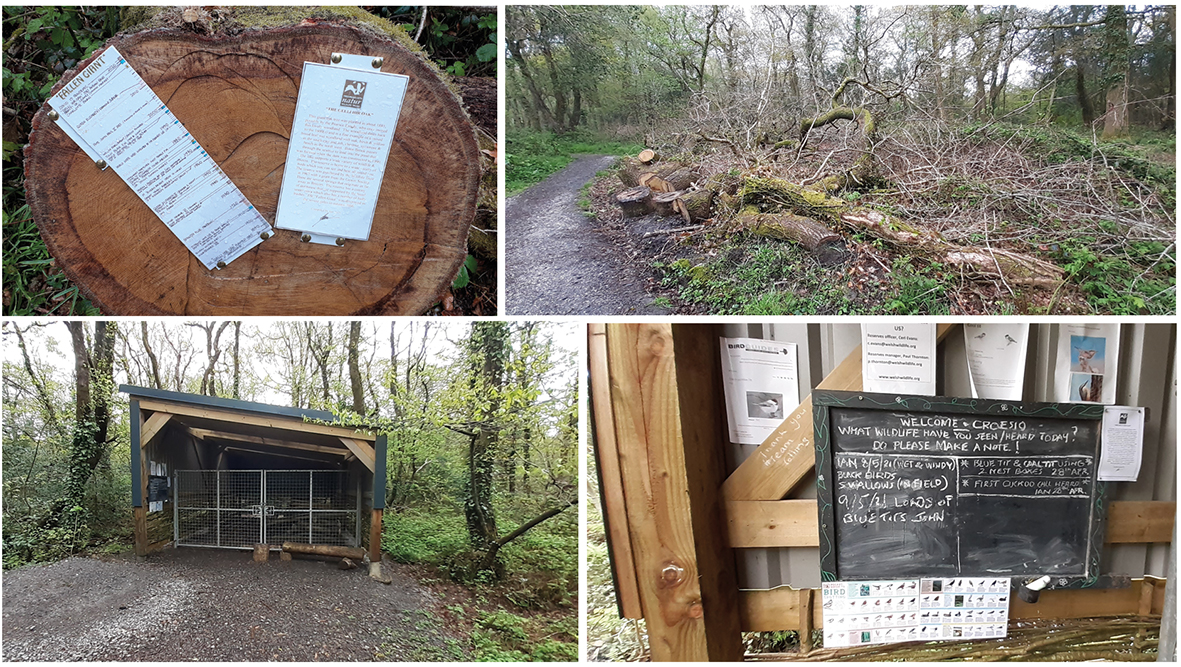 Re-trace your steps, past the pond and back onto the main drag. Just after the wooden seat, turn left up the path to explore another section of the woodland. On the way, you’ll pass the sad sight of the giant Gelli Hir Oak blown down in a recent storm; its exposed trunk has been lovingly time-lined by one of the regular visitors. Further on you’ll come to the ranger’s barn where there’s a chalkboard where you can chalk up recent wildlife sightings. The path curves around to the right and you’re now heading back down towards the start, but you take a diversionary left at the next available path which takes you around the southern part of the wood. Be careful here because it can get a tad wet and muddy especially on the section where it runs parallel with the road. The path snakes through the trees returning you to the car park and the end of the walk. So, there you are – Gelli Hir Wood, a somewhat overlooked corner of Gower but now our little secret.

IMPORTANT: The rangers at Gelli Hir would like to make it clear that dogs should be kept on leads at all times and that walkers should keep to the designated paths

* Without wanting to rain on your parade Ian, John Ashley did do Gelli Hir Woods way back in September 2015 but it’s about time we went back. Ed

Start: Gelli Hir Car Park on unclassified road off the B4271

Refreshments: None on site – Three Crosses and Shepherds close by

Mudometer: I’ve been warned that it can get very muddy in certain areas

Dogs: Must be kept on a lead at all times

Jethro Tull: Songs from The Woods

Canned Heat: Going Up The Country