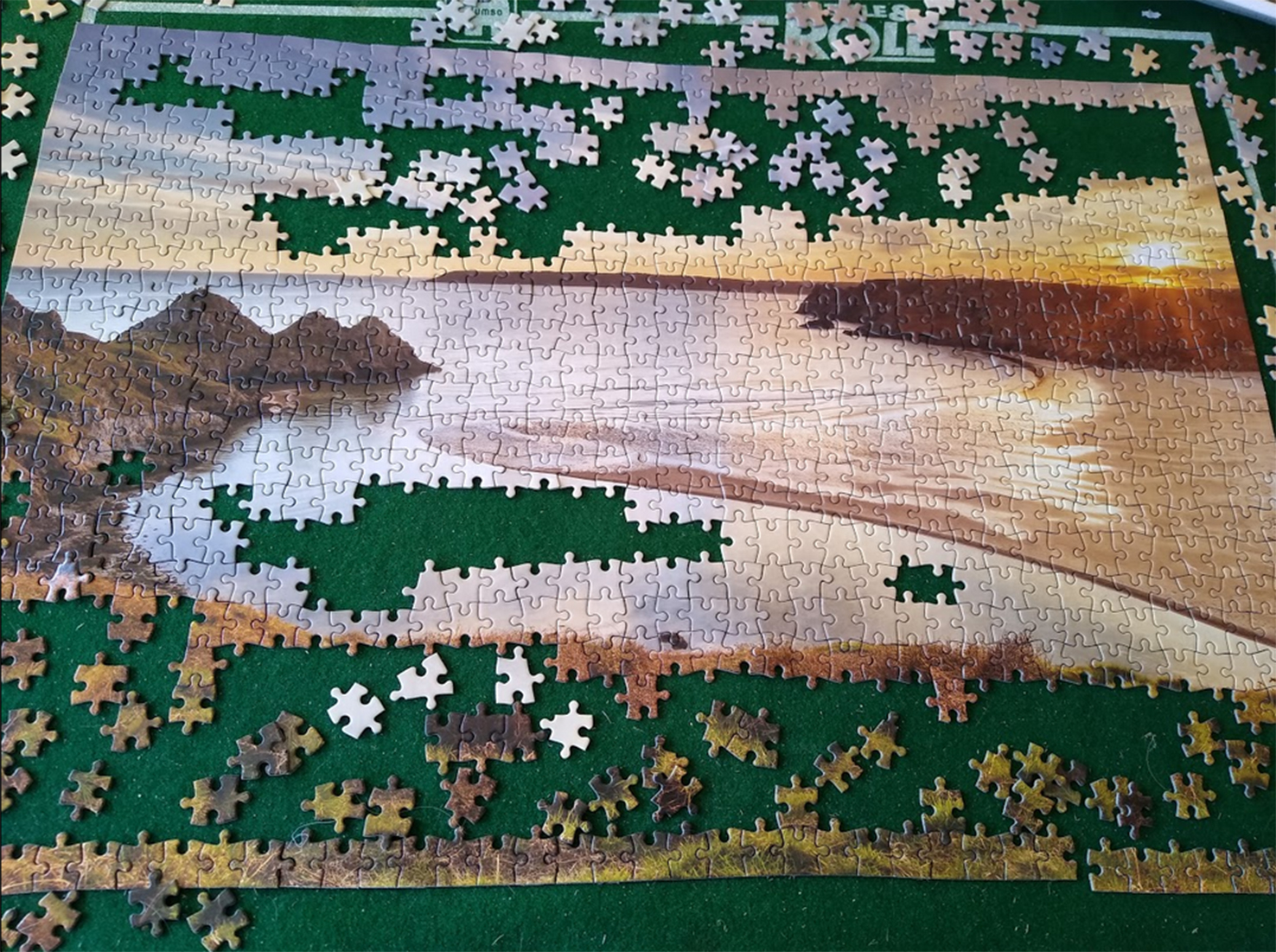 Liz doesn’t like giving up – not even on a jigsaw puzzle, but sometimes it is easier to let something go than put yourself through unnecessary stress.

‘I can’t do it!’ I sniff as the tears slowly roll down my cheek. 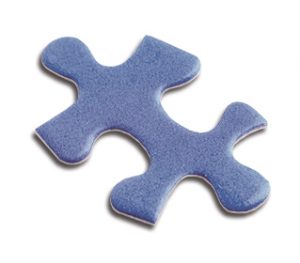 ‘But don’t you see? It’s a reflection of my life.’

Okay, there might be a bit of dramatic exaggeration there but the fact that I cried in frustration is completely true.

I was given the jigsaw for Christmas and for the first four months of this year the pieces were spread out on my dining-table waiting to be slotted into place. (Thank goodness lock-down meant we weren’t having any guests to eat at our table.) I began enthusiastically. It was a scenic jigsaw i.e. lots of sky and grass, and while it wasn’t the type I prefer – I like the more comic or detailed ones – I had no doubt in my ability to finish it.

Fast forward two months and I’ve reached the crying stage. If I manage to fit three pieces in a day I consider it worth celebrating. But I can’t give up; can I?

I google ‘giving up’ feeling sure there’ll be lots of ‘Yes, you can, it’s fine, don’t worry,’ memes: there aren’t. Just the opposite. “If you feel like giving up, just look back at how far you’ve come.”

I do that, and I have done a lot of the jigsaw, probably two-thirds at least, but the remain-ing third is the hard bit. Correction, the even harder bit. I sigh heavily.

A jigsaw is meant to bring the doer pleasure, and if it doesn’t then the logical step is to stop doing it, isn’t it? So why do I find it so hard? Because only losers give up.

Football fans will tell you that Liverpool were 3-0 down at half-time in the 2005 UEFA Champions League Final only to turn the game around and win.

Actually 2005 was a good year for turnarounds as Wales came back against France to win and go on to do the Grand Slam. Because they didn’t give up.

‘There is no failure except in no longer trying.’

‘Giving up is the only sure way to fail.’

I’m writing this article in Mental Health Awareness Week, and I am pretty sure that lots of us feel we have failed in one way or another, often because we’ve given up on something. We may have been unable to hold down a job, maintain a relationship, or refrain from smoking/drinking/eating too much. We don’t need anyone to tell us it’s because we’re failures: we know that.

Not giving up is something that is instilled in us from an early age. I still remember being told by my maths teacher that I gave up too easily. That was fifty years ago. The voice in our head says, ‘Just because you fell off your bike and broke your wrist, that’s no reason to stop. Get straight back on it!’

But sometimes giving up is the right thing to do. When something or someone is causing us mental distress then it’s time for a rethink. A healthy relationship involves give and take on both sides, and sometimes we need to take a break to protect ourselves. Of course, I do realise it’s a lot easier for me to say that when I’m only talking about a jigsaw!

There’s a story in the Old Testament about a prophet called Elijah. He was so scared and depressed he said to God, ‘I’ve had enough. Just let me die.’ He appeared to be giving up on his work, on life. I think in today’s world he would be considered a danger to himself. But what did God do? He provided food, drink, and rest for him. God knew that what Elijah needed was looking after. He could go back to his work refreshed later. So, yes, there are times when giving up, either short-term or permanently, is the beneficial thing to do. Jesus told his disciples to not only give up but to shake the dust from their shoes if people didn’t want to listen to them.

There’s a difference between giving up and knowing when you’ve had enough, or you’re wasting your time. And when you’ve had enough, it’s not failure; it’s wisdom, acknow-ledging that you are of value too. The writer of the book of Ecclesiastes writes, ‘To every-thing there is a season.’ Maybe now the time is to look after yourself.

As for my jigsaw, well, I’d love to say I finish-ed it, but it’s boxed and packed ready to go to a friend who loves this sort of challenge. And the relief I felt when I finally did it. Huge sigh. And it wasn’t easy. I umm-ed and aah-ed even after I thought I’d decided. But my table is clear and a weight I didn’t even realise I’d been carrying has been lifted.