This month we take a look at how other people decorate their houses with books, find out why a wolf will chew its own leg off if it has to, meet the man who flew around the world in a gyroplane, and discover just what’s going on when you make an electronic payment… 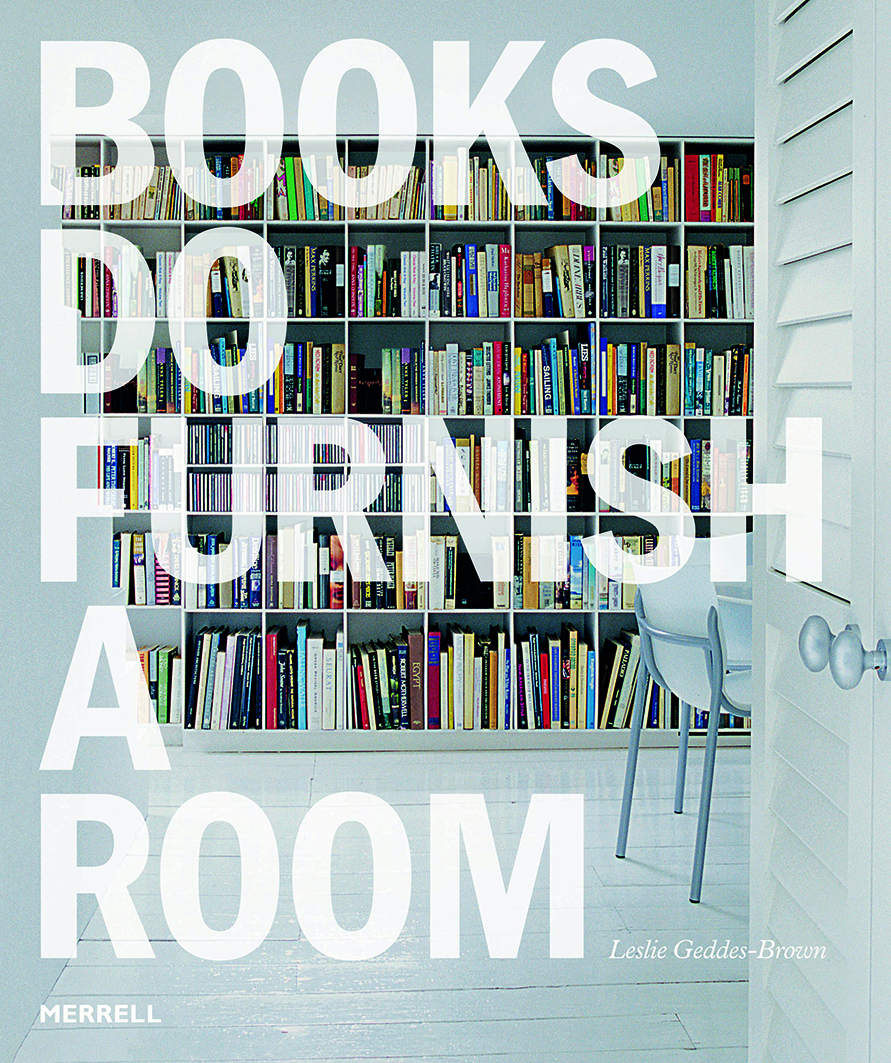 ‘Books do Furnish a Room’ by Leslie Geddes-Brown, published by Merrell, £19.95, pb

As Leslie Geddes-Brown says in the introduction to her superb Books do Furnish a Room, “of course, not everyone is a serious reader and not everyone actually want a library.” But if you’re reading this, perhaps attracted by the inspirational personal libraries in the images here that are taken from the book, you’ll already understand the attraction of the book as an object as well as a source of information, education or entertainment. The literary boffins among you will by now already have realised that Geddes-Brown has pinched the title of her book from an in-stalment in Anthony Powell’s classic novel sequence A Dance to the Music of Time, which is understandable, because per-sonal libraries are part of a tradition (except for when they’re not, as is amply shown in this coffee table book), and we all want one. If you don’t, it follows you’re probably not reading this review, and neither is this book for you. 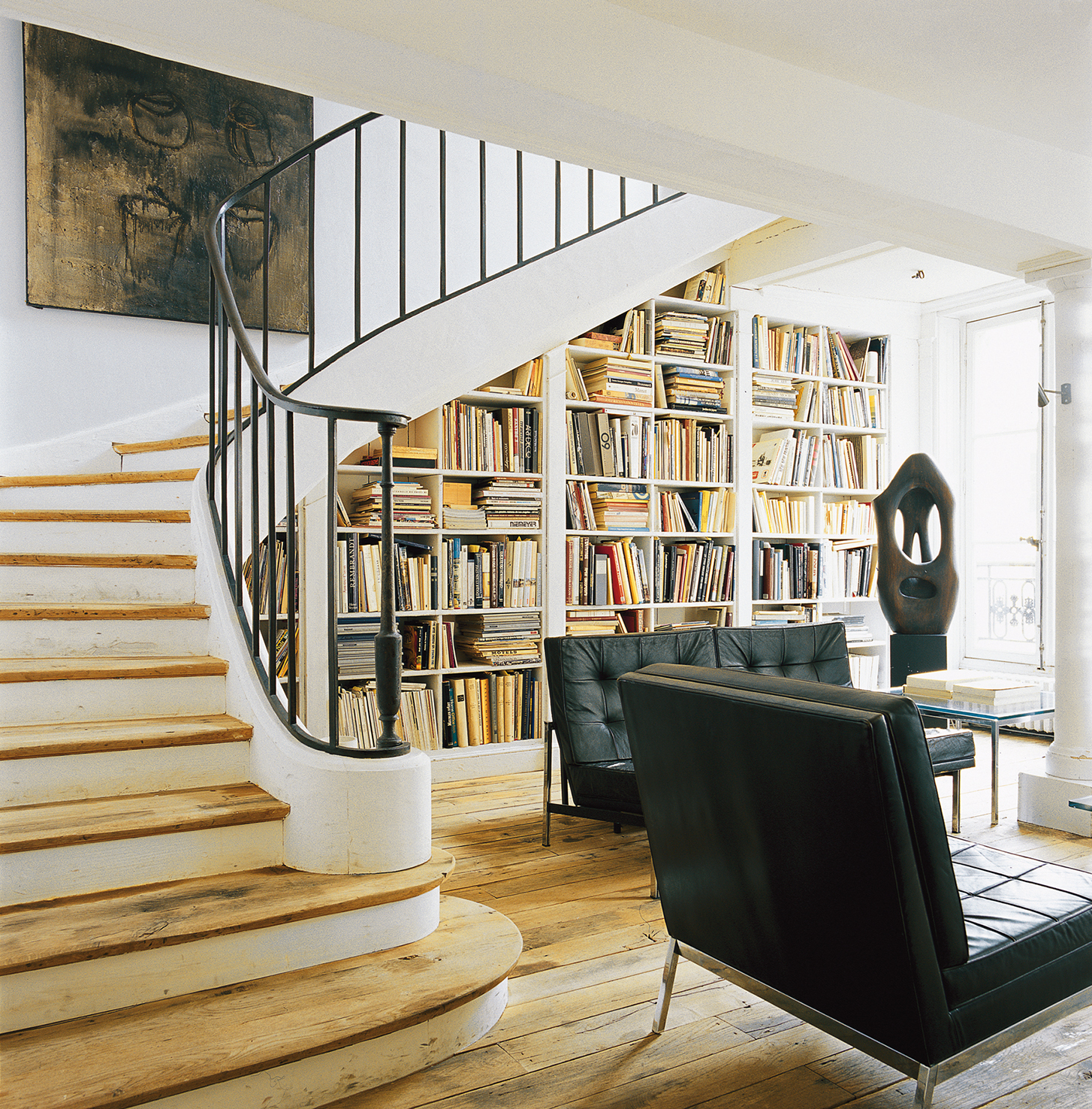 But if you are intrigued by the idea of books as an aspect of décor, something that adds character to a living space or simply a comforting alternative to electronic screens and other vulgarities of the modern world, then you are going to love Books do Furnish a Room. Geddes-Brown examines how interior space can be put to creative use while, of course, presenting books in attractive and interesting ways. If like me, you have too many books for the size of your house and they are spread about everywhere – mine’s a working library – you’ll go green with envy. Something of an interiors classic in hardback, it’s due to see the light of day as a much-awaited paperback. And because it’s from Merrell, this book is a work of art in itself. And so, you’ll be able to enjoy Books do Furnish a Room handsomely furnishing your own room, if you see what I mean. Ranging from minimalist modern to sturdy leatherbound classicism, Books do Furnish a Room is a lovely, voyeuristic (in the nicest sense of the word) insight into how book other collectors go about it. 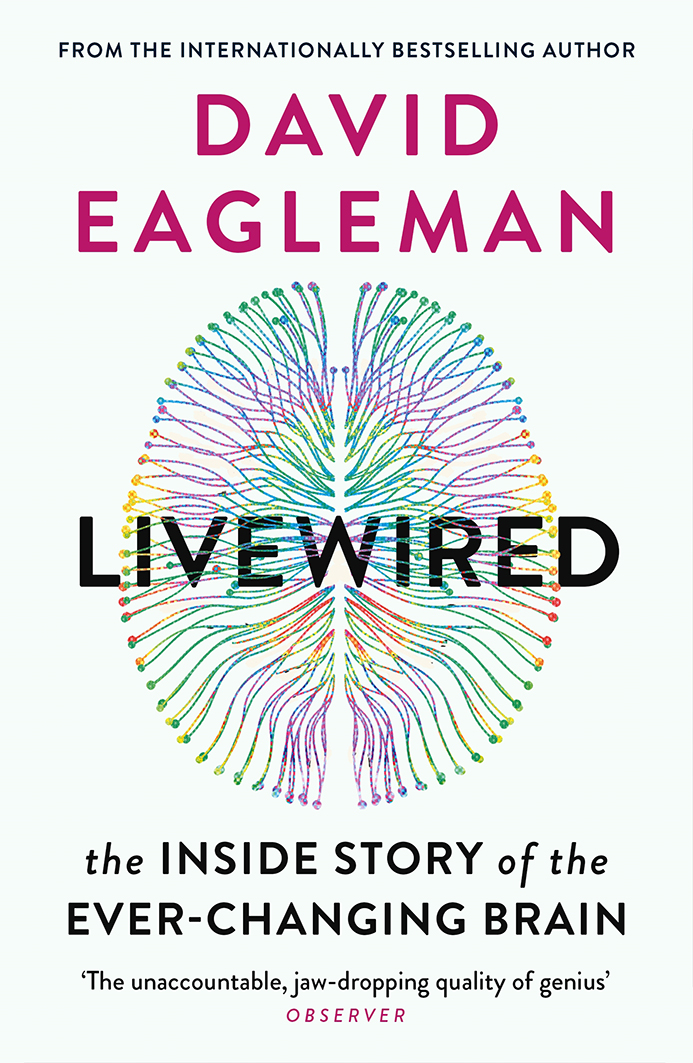 Unlike the machines humans currently manufacture, the brain is so much more than a combination of hardware and software. In fact, says David Eagleman in his new book Livewired, we need a new word to describe what’s going on in the immense forest of 86 billion neurons that makes up the human brain: he calls it ‘liveware’. To demonstrate difference between machines and the mind, Eagleman tells two stories contrasting the fortunes of the Mars Rover Spirit that got trapped in the Martian sands and ‘essentially died,’ and that of the wolf that got its leg caught in a trap and chewed its own leg off to free itself. “It then walked away on only three legs. Obviously, the wolf brain didn’t evolve to deal with a body with three legs. But it can figure it out,” says Eagleman. Meanwhile Spirit has sent its last message to Earth. Eagleman says it is through understanding the adaptive potential of the brain that we can emulate its workings to produce better, more intelligent machines in the future. This is because the magic of the brain is not to be found in the parts it’s made up of, but in the way those parts endlessly re-weave themselves into an electric, living fabric. Packed with illustrative anecdotes, Livewired also has the scientific rigour that comes from decades as a leading researcher – including new discoveries from Eagleman’s own laboratory – in the field of brain plasticity. If you’re interested in your own brain – and we really all should be – then Livewired is a mind-bogglingly good place to start. Brilliant. 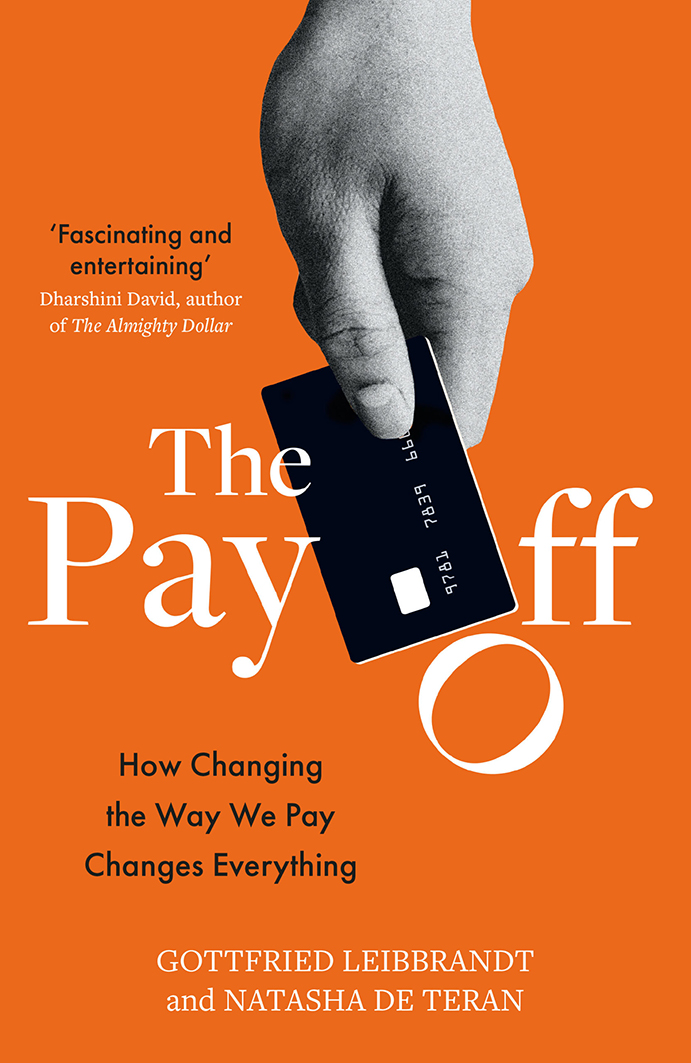 ‘The Pay Off: How Changing the Way We Pay Changes Everything’ by Gottfried Leibbrandt and Natasha de Terán, E&T Books, £16.99, hb

Put at its simplest, a payment is a bilateral transaction in which money moves between parties in exchange for goods or services. The ‘payment’ has been at the heart of how societies work since our tribal origins and has been essential to economies for more than seven millennia, which is roughly how long we’ve been using metal coins to represent fiscal value. The idea of physical money is so fundamental that the authors of The Pay Off Gottfried Leibbrandt and Natasha de Terán argue it is one of the three most important aspects of life that enable societies to function (the other two being religion and writing). And while over time we’ve devised ingenious ways of moving money about, the biggest changes have come with the digital revolution, our current era in which inno-vation is in the hands of the ‘smartest brains’ whose job is to make paying for things easier. Rapid changes in technology mean that we can spend and borrow in ways that a generation ago we could hardly have dreamed of. And so, we’ve never had it so good? If only it were that simple, say our authors, who delve deep into what happens when you hit the ‘ok’ button on your keyboard to pay for something on the internet. It’s no big surprise to find that technology is at the heart of all this. But the heart of what? The Pay Off examines what the future holds for cash and asks if it will eventually be ousted by crypto currencies like Bitcoin. Why are some countries better at digital payments than others, and will we really go to war over invisible, intangible, digital dosh? Great stuff. 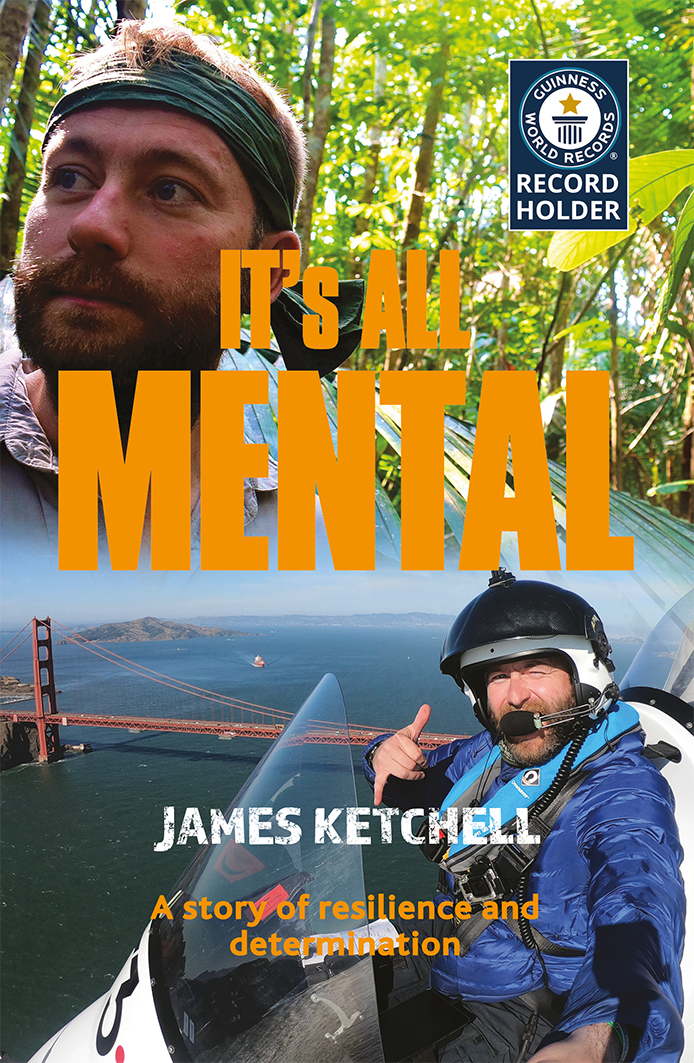 James Ketchell is an extraordinary man. Actually, he isn’t. He’s an ordinary bloke who just happens to have recently completed the first Fédération Aéronautique Internationale-ratified around-the-world gyroplane flight: a 24,000-mile, 175-day epic feat of endurance, logistics, training, courage and ingenuity. He’s also rowed across the Atlantic Ocean in 110 days, cycled 18,000 miles around the world in six months and climbed the top of Mount Everest, despite having pneumonia at the time. But, as he says in his debut book It’s All Mental, for Ketchell the challenge wasn’t an ocean, a mountain or the vast open skies, but the obstacles he put in his own mind as a youth, which he admits were all related to ‘underachievement.’ This is his story: how a below-average school kid got to become described by Bear Grylls as ‘amazing.’ No-one who knew Ketchell as an awkward, unmotivated and less-than-academic child could have predicted that he would become an adventurer of high achievement and who would go on to motivate others, particularly school children. In trying to describe what it is that propelled him out of his teenage indolence to become one of the leading adventurers of the day, he puts it down to discovering your own mental strength, motivation and resilience. His fundamental philosophy is, if he can achieve all these things, anyone can. His ambition now is to use the adventures recorded here in It’s All Mental to inspire others: “we can all set ourselves inspirational goals and achieve them – the capability to succeed lies within.” 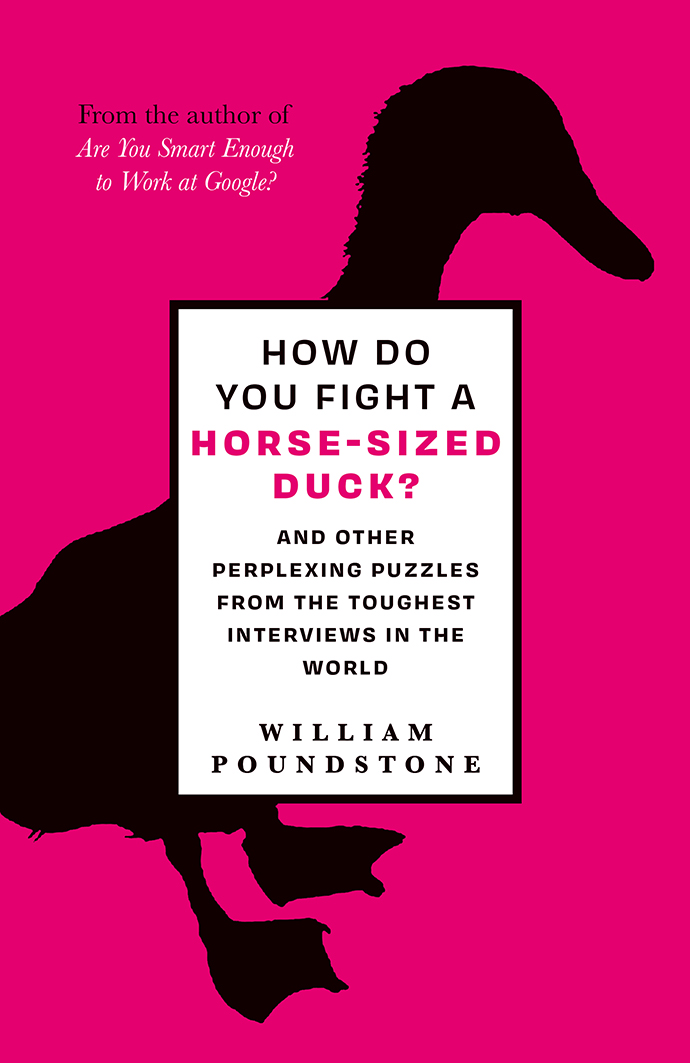 Imagine for a moment you’ve gone for an interview at one of those giant technology companies and the person on the other side of the desk asks you the following question: would you rather fight a horse-sized duck or a hundred duck-sized horses? Your instinct might lead to you suspect that the interviewer was having fun at your expense. But these are the sort of quest-ions currently being used to see if you’d fit in at A-list companies such as Apple, Netflix, Amazon… all the tech giants, blue-chips, multinationals. So why are they throwing such apparent nonsense at the poor applicants? The answer says William Poundstone in his literally thought-provoking How Do you Fight a Horse-Sized Duck? is to give the interviewers a mechanism by which to sift through the mass of applicants that routinely outnumber the advertised positions by a factor of 25 or more. Of course, this question and the 70 or so others like it in Poundstone’s book, doesn’t have either a literal or correct answer. Which can only mean that the interviewers are testing the way you think. And if you think that this is all a waste of time, you can check out the video on YouTube of none other than Bruce Springsteen weighing in on the topic. Working on the assumption that the other 24 applicants are equally qualified for the job, the differentiator becomes how you handle wild-card challenges. Take another one: why are tennis balls fuzzy? Don’t know? Thanks for popping in, goodbye. Or you could, say: I don’t know, but what I do know is that golf balls, footballs, cricket balls and squash balls aren’t fuzzy. Clearly, Poundstone isn’t talking about fighting ducks or fuzzy balls come to that, but creative thinking. And that’s what gets the job done these days. 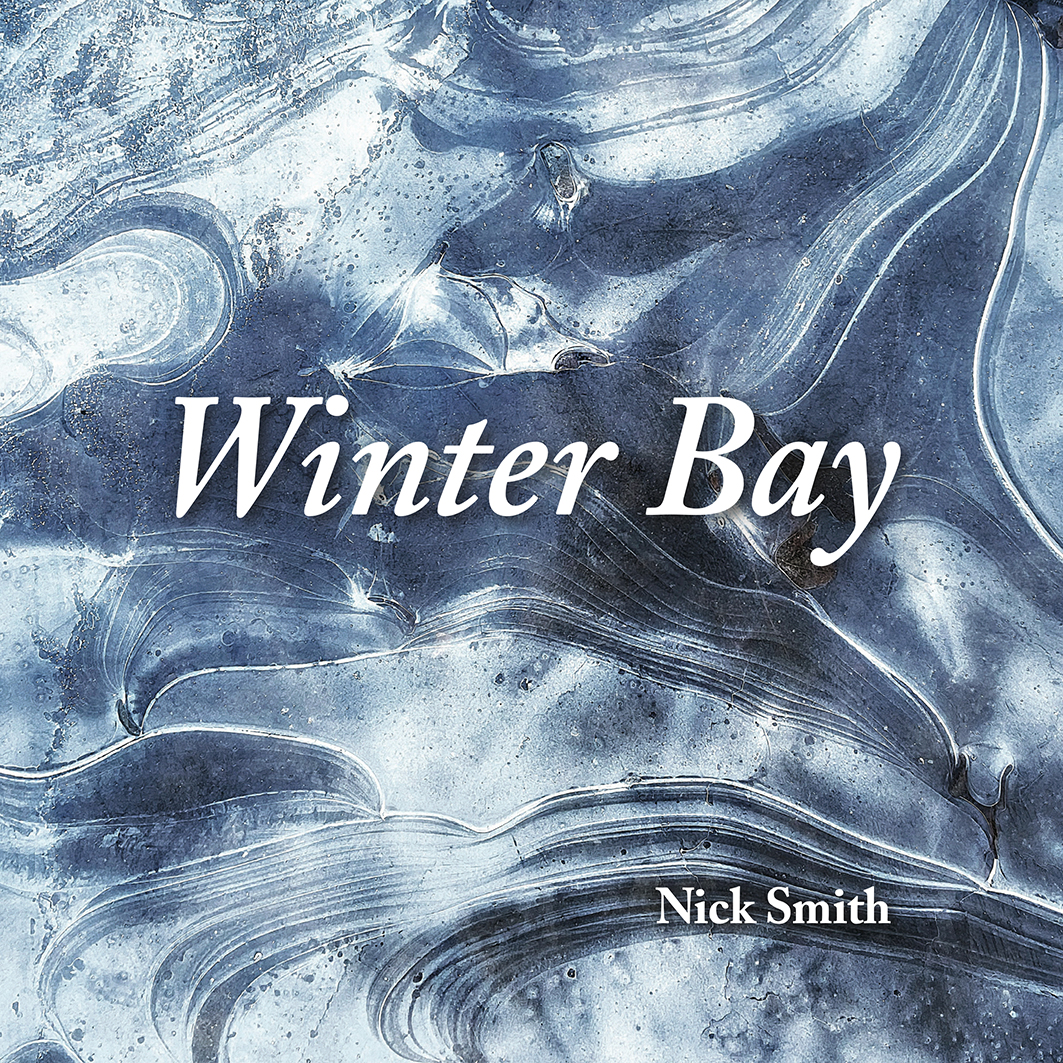 Encouraged by the success of last year’s lockdown portfolio of summery iPhone photos of Swansea Bay – To the Lighthouse – local photographer (and Bay regular) Nick Smith has produced a follow-up volume documenting the same subject, only this time during winter. And the two books could hardly be more different. Gone is the carefree cycle ride to Mumbles Head, cheerfully snapping away at golden sands and meadows full of buttercups. With Winter Bay we have a darker and much more abstract collection of iPhone photographs that seems to reflect just how fed up we all were with the second lockdown once the novelty of a long hot summer in isolation had worn off. Smith’s new images are bleak and ice-ridden, often grainy and sometimes blurry, seeming to speak of a photographer whose obvious affection for Swansea Bay has been tested to the limits by his inability to travel further afield than the pier. Not so, he says in his introduction to Winter Bay: the pictures are just a bit starker because that’s what winter is like, particularly the season just past when it barely got fully light and hardly ever stopped raining. Even so, what we have here is a collection of photographs in polar contrast to the optimistic Lighthouse sequence that cap-tured the essence of the deserted sunlit bay at its most beautiful. Smith’s latest work – which is intriguingly all shot in square format rather than the more conventional rectangular ‘postcard’ style – is stylistically more challenging and, as a result, a better collection of photographs. While he says that this is ‘almost certainly’ his last smartphone project, I’m prepared to bet that by the end of the year we’ll see something from him called ‘Summer Bay’ or similar and collectors will like the fact that this is a signed, limited edition.