To say that we’ve been somewhat deprived of the arts for the last year and a bit would be the understatement of the century. In recent times however, things have slowly but surely been returning to some semblance of normality, and we can now visit an art gallery, watch a live opera, and hopefully pop along to a gig – a blessing after 12 barren months of virtual tours and zoom-based shows. But with so much going on (well, comparatively), where do you start? Here are three things to add to the diary:

It feels like déjà vu writing these words, but Swansea’s flagship art gallery is finally – FINALLY! – open to the public once more. Of course, the last time I wrote those words was following the first lockdown in 2020, and we all know what happened next. But this time I’ve got everything crossed that the Glynn Vivian will remain open for the foreseeable future. 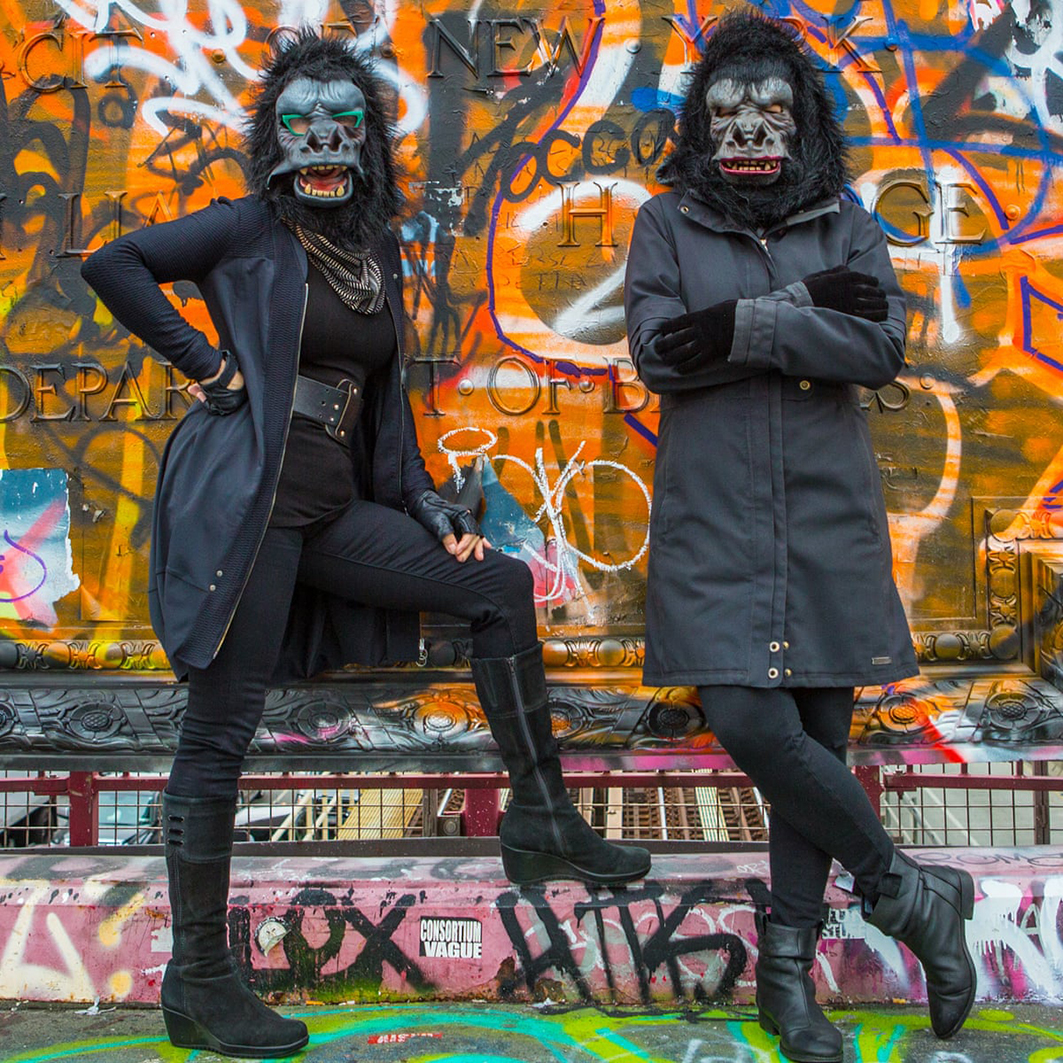 That being said, the most exciting of the current exhibitions doesn’t actually take place in the gallery and might have caught your attention already. Billboards designed by the New York – and LA-based art collective The Guerrilla Girls (pic left) have been popping up across the UK as part of the 2021 Art Night event, with Welsh locations including Cardiff, Abergavenny, and here in Swansea. The feminist artists are known for tackling the inequality they see in the art world, and this new commission asks the public to count how many works by women artists are on display at their local art gallery, and to compare the total with how many works depicting naked women are on display. It will be interesting to see the final results for across the country, and something tells me there might be one or two curators hastily rejigging their displays about now. Entitled; The Male Graze (get it?), it runs until July 18. 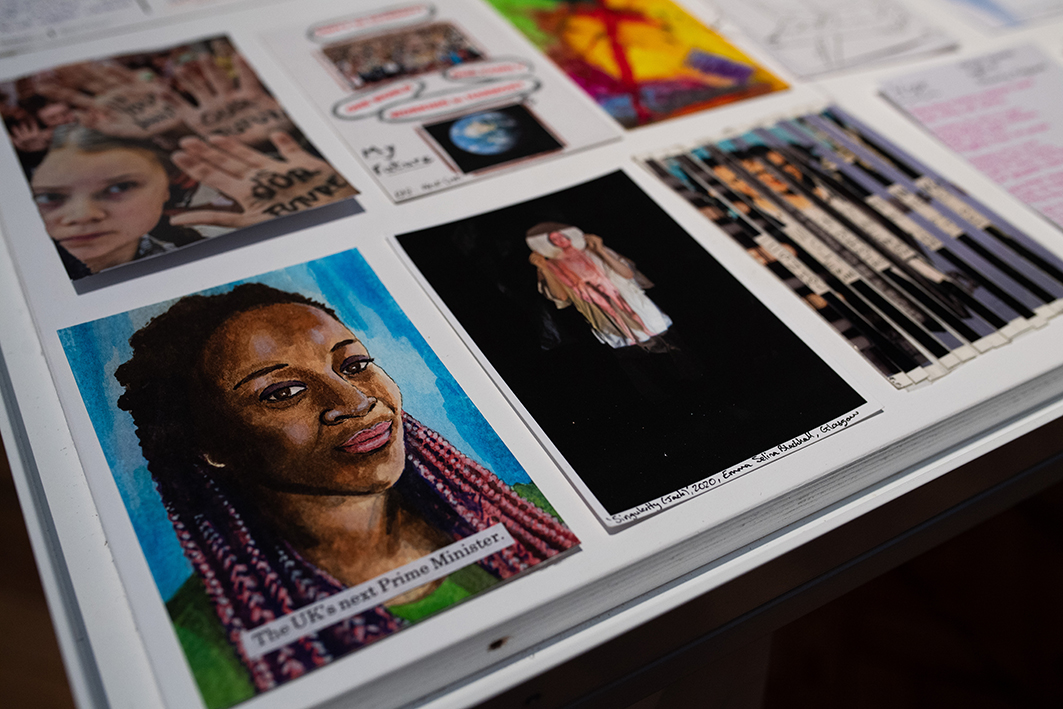 As for the gallery itself, and as with the last lockdown, while the doors might have been closed, those working behind the scenes have been busy stocking up the new displays, and while it’s always great to catch up with some old friends – from the landscapes of Monet and Pissarro to homegrown favourites like Gwen John and Glenys Cour – the new temporary exhibitions are equally deserving of our attention. One such addition by the Welcome group marks the tenth anniversary of Swansea City of Sanctuary and shines a spotlight on the vibrant creative scene of our multicultural city, while Postcards to the Future (pic right) is a display of miniature works sent to the museum from Wales and the world, in response to global events in 2020. 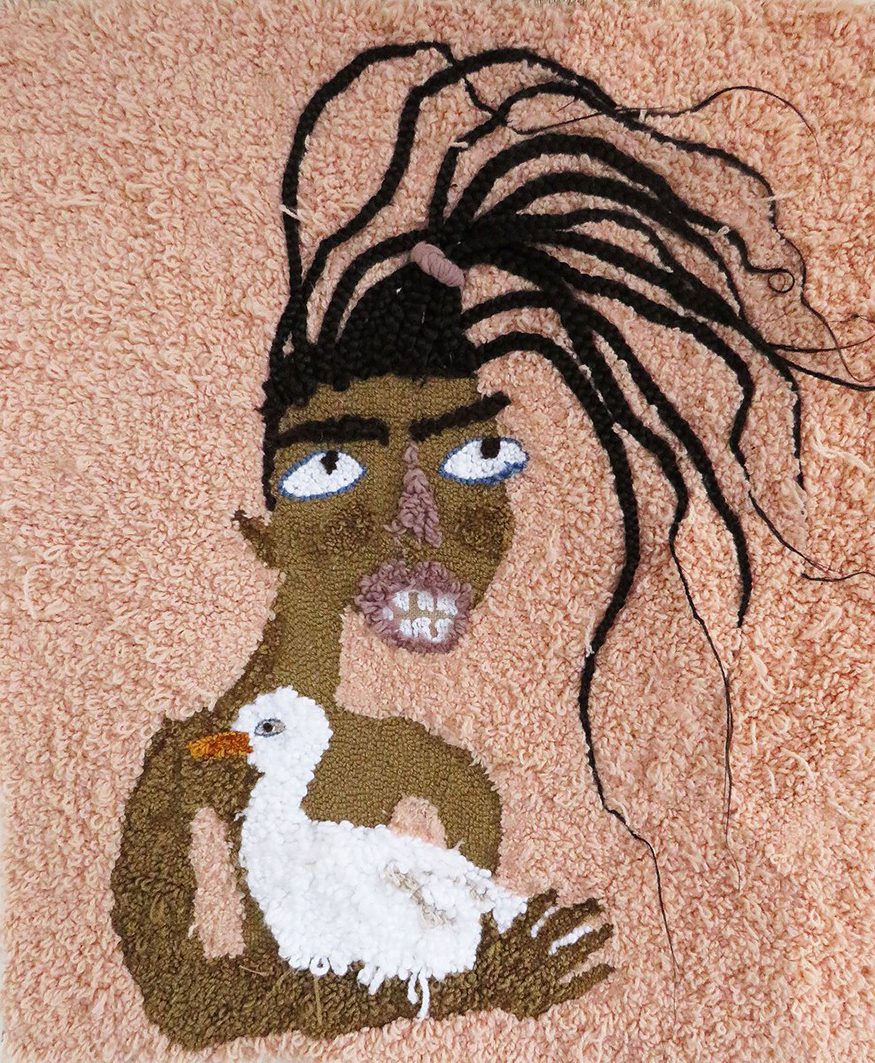 Of all the new exhibitions, the most eye-catching are the striking textiles of Wakelin Award winner Anya Paintsil. The Welsh and Ghanaian artist has created works that appear to be functional rugs – albeit rugs which have been displayed on walls – but this seeming simplicity belies, or even adds, to the impact of their powerful messages on race and gender. Almost sculptural in the way that the art is depressed into the fabric and weaving such elements as human hair and braids into the work, there is much to enjoy in Paintsil’s work. The exhibition ends on October 31, but the good news is that two of her works, including the award-winning Mair at Cylch Meithrin (pic left), have been bought by the gallery and now form part of the permanent collection in Swansea.

2. Welsh National Opera – Live opera is back – both indoors and out!

After what feels like an eternity since I last saw WNO in action (OK, it was February 2020, but it has been a very long year), our national opera company will return to the stage this summer, to present a family favourite in the surrounds of a National Trust property, followed by an actual tour inside actual theatres where they will perform two big-hitters of the repertoire. 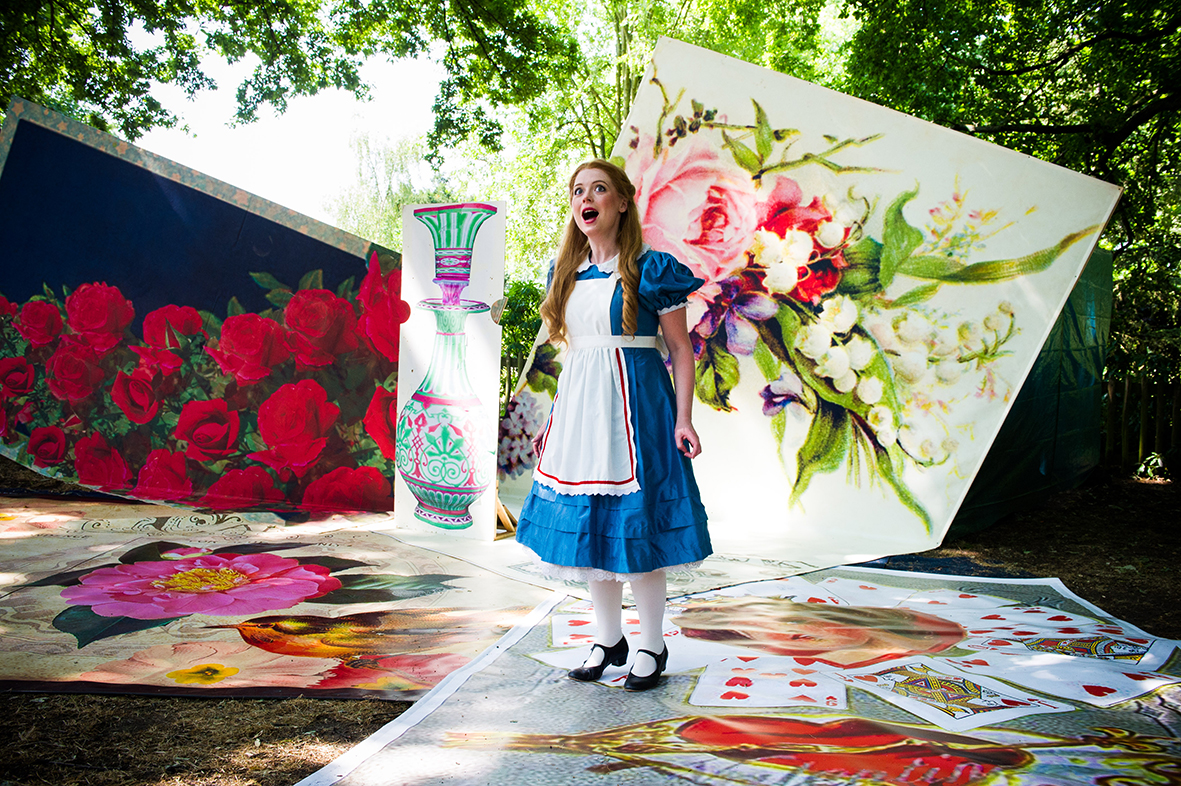 There will, naturally, be various safety measures in place – what exactly they might be will presumably change between now and then – but even if it involves standing on a chair alone in a rain drenched field, it will be worth it to see Rossini’s The Barber of Seville and Puccini’s Madame Butterfly performed live once more.

In the meantime, if you’re quick you can catch the Welsh premiere of the operatic adaption of Lewis Carroll’s Alice’s Adventures in Wonderland, an intimate production at Dyffryn Gardens in the Vale of Glamorgan. Originally produced  by Opera Holland Park, the music is a mix of “jazz, musical and opera styles” and sees our very own Fflur Wyn (pictured above) reprising the title role. Watch this space for a preview of the autumn tour coming soon. 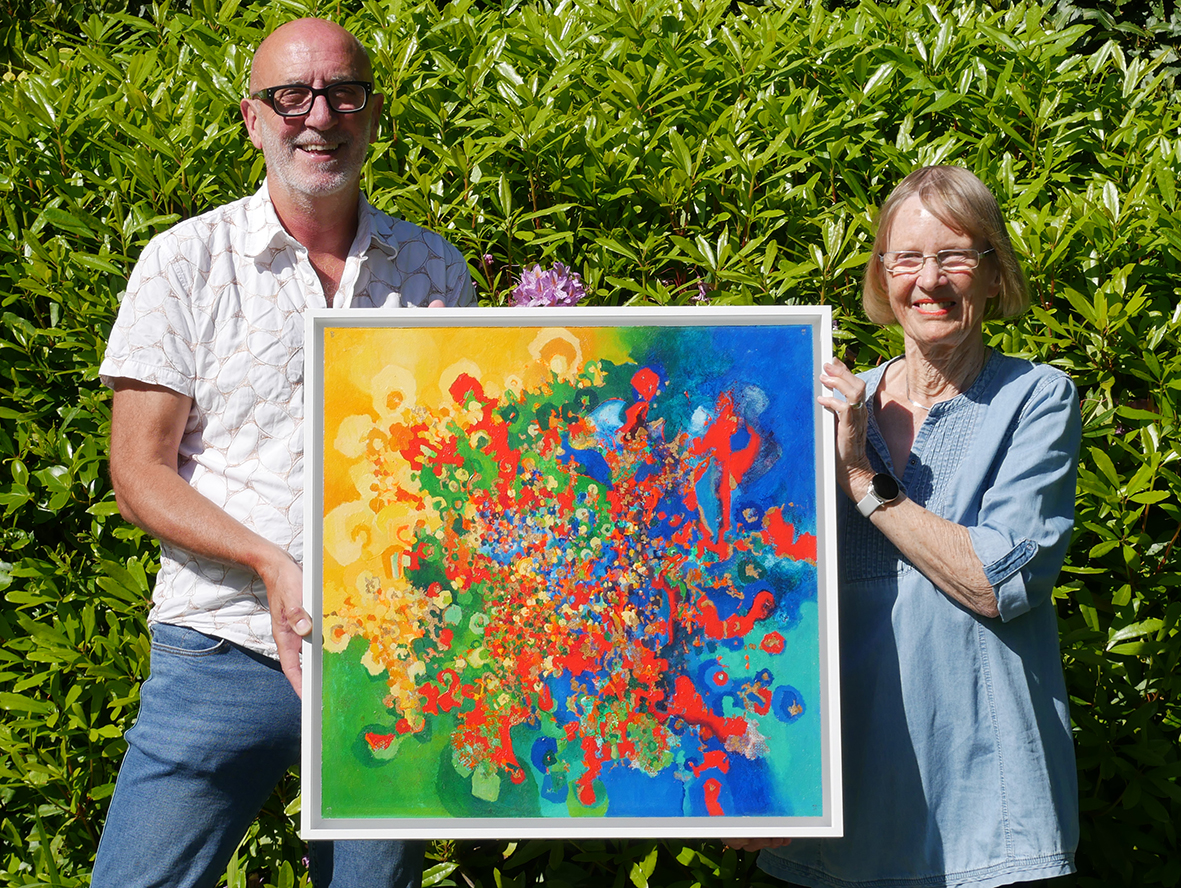 Swansea’s favourite singer songwriter is back with what could be the feelgood hit of the summer.

Entitled “I Still Think About You,” Mal Pope’s new tune has been getting played everywhere from You Tube to BBC Radio 2, and if you haven’t heard it already, it’s available to down-load now. It also sees him team up with artist Carolyn Little who created the suitably summery cover art, and whose work can be seen on display at The Attic Gallery in Swansea Marina right now – more on that next month.

I caught up with Mal to chat about the challenges of recording and touring in the current climate, as well as his recent appearance on the BBC’s Swansea-based episode of Songs of Praise.

What can you tell us about the new single?

“Lockdown was difficult for everyone, but for musicians it was so demoralising as we spend so much time on the road and to be honest that’s where many of us gain our self-esteem as well as income.

“When my friend Chris Needs passed away suddenly last year I was asked to look after his late-night radio show. It was a responsibility and concern as his dedicated audience were distraught to lose someone many considered to be a family member.

“After a week or so of finishing at 1am, I realised I couldn’t go straight to sleep. I decided to start writing new material. It was such a hot summer I was reminded of the long hot summers of my youth in the 70s and the music that became my soundtrack back then – the sound of Philadelphia, the Detroit Spinners, The O’Jays, Elton’s Philadelphia Freedom. ‘I Still Think About You’ has a bit of a tip of the hat to those songs, but hopefully with a modern twist and sound as well as being recognisably retro.”

What were the challenges of recording during the lockdown?

“Like everyone in all sorts of businesses we have had to become creative to be creative with other people. Luckily, all my band have their own studios and facilities. There is nothing like all being in the studio at the same time to create a vibe but needs must.

“I would record a basic track and then email that to the band. I also gave a description of how I wanted it to

sound. For Andrew Griffiths, my young string and brass arranger, that meant I had to send him videos and MP3s of the bands I was talking about because he wasn’t born when they were hits.

“My band are so good, all of the tracks they sent fitted seamlessly into the final project. The only difficulty was which bits of theirs to leave out. The good thing was they couldn’t be there in the studio to argue with me when I made those tough decisions! 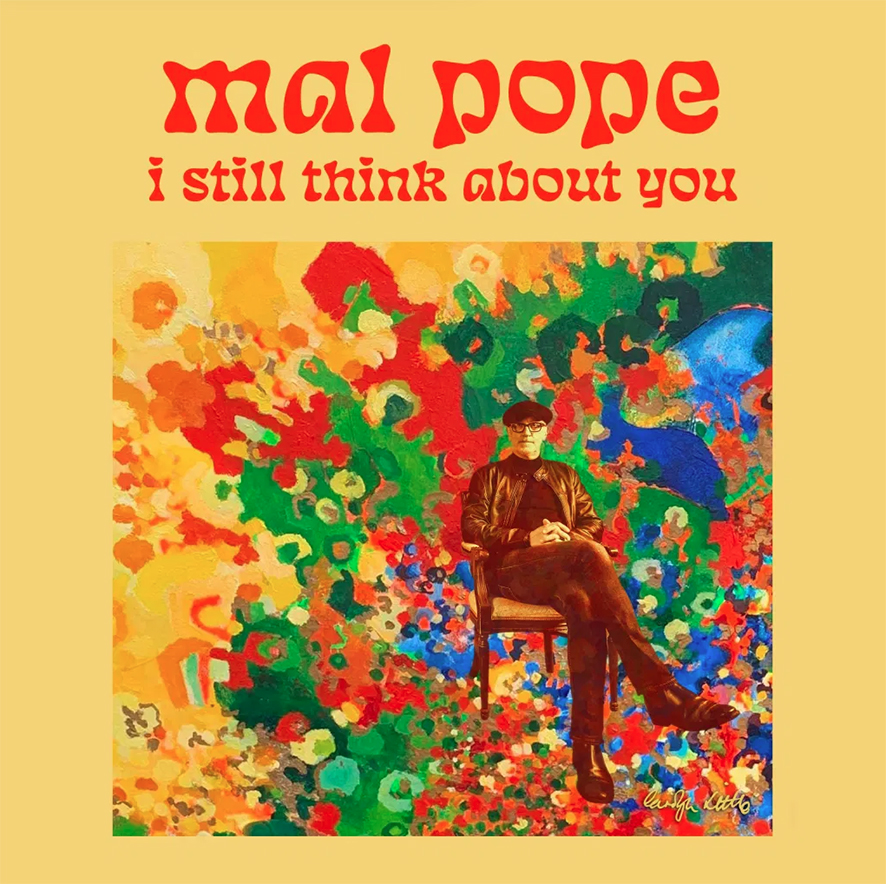 “Also, the cover is really important as you need to grab the attention of music program-mers. Normally I would set up a

photo shoot with a photographer and work with an art director before starting. This time I had to work on my own. I saw some of Carolyn Little’s work online and thought it was terrific, vibrant and possibly even psychedelic. It reminded me a bit of the covers for 70’s disco records. My son had been made redundant from his job in the music business and had some time on his hands, so I sent him that artwork and a picture of me and ideas of the type of retro covers I wanted to reference. He loved Carolyn’s paintings and has come up with something I think really captures the sound of the record and has just completed a lyric video based on more of Carolyn’s paintings.”

The song has been getting lots of airplay, and you even moved the release date forward because it was proving to be so popular – have you been surprised at the reaction?

“You always hope – that’s why I sent a tape to John Peel when I was 13. It’s hard not to be biased but I thought as the boys added their contributions the record might work well on radio if the sun shone. I decided to take on a plugger whose job it is to get the music in front of music producers.  Within a day of him sending out the record we had two interviews booked and our first play with Janice Long. The producer of her show said get the song out on streaming ASAP.”

Many readers will have seen you on Songs of Praise recently, how was the experience?

“It was terrific to be invited to sing on Songs of Praise from new Siloh in Landore (The Liberty Church). It’s a chapel with lots of family connections. My grandmother Myfanwy played the organ there and on occasions my great grandfather would conduct an orchestra made up of chapel members with my auntie Ceridwen on first violin and my grandmother on the organ.

“It was strange as it was the first public performance in 18 months. It was all covid secure so not exactly normal, but it was amazing to be out singing again. Of course, with millions watching the programme, the reaction from around the UK and the world has been really encouraging as well.”

Finally, what’s next for Mal Pope?

“I wrote so much music during lockdown, so I’m planning to release singles regularly over the coming months. My tour is being rescheduled every month, but it looks like I will have my first gig on July 9, subject to confirmation. It will be a very limited audience cabaret style at the Grand Pavilion Porthcawl. I will be on stage but will perform behind a Perspex sheet. It might be the first show in Wales since lockdown.”