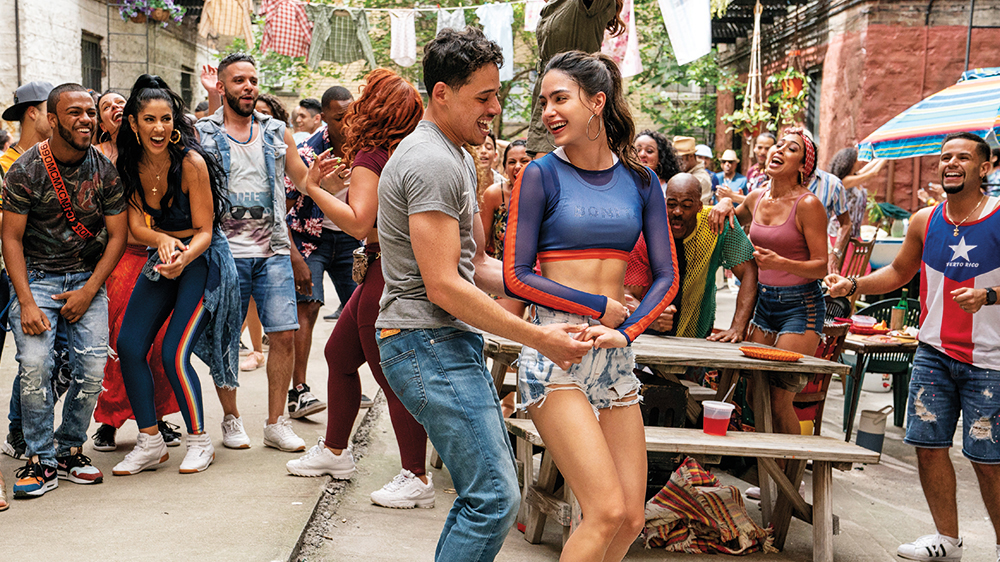 “Washington Heights. Say it, so it doesn’t disappear!”

In The Heights opens with main character Usnavi telling the story of his hometown to a group of children, a very fitting beginning for a film all about the importance and value of community, immediate-ly anchoring itself in the tradition of communal storytelling. It’s a very different piece from Hamilton, Lin-Manuel Miranda’s far better- known musical opus but shares a great deal in common with it as well – if Hamilton is an origin myth for the USA, In The Heights is a campfire story; more modest in its scope and scale, but ultimately no less affecting. 2021 promises to be a good year for movie musicals, and if they’re all anywhere near as good as this we’ll be in for a treat.

Usnavi is the effective protagonist, but it’s really an ensemble piece taking in many different people’s goals and dreams. Usnavi wants to go back to the Dominican Republic and reopen his father’s old shop, El Suenito, “The Little Dream”; Vanessa wants to move out of Washington Heights and work in fashion; Nina is struggling with college and being away from home but desperate to make something of herself. All these stories revolve around an impending blackout and a winning lottery ticket, whose owner nobody can track down.

It’s definitely a case of characters over plot, giving us plenty of time to get to know and empathise with all these people. Some of the stories pack more punch than others: Benny, Nina’s old boyfriend, doesn’t get the screen time he really needs for his to land properly, but Abuela Claudia, the entire neighbourhood’s grandmother who’s adopted everyone else’s dreams as her own, gets some of the hardest-hitting moments of the whole film despite being a supporting character. And when In The Heights works, it sings – figuratively and literally. The bits that don’t work are ultimately trivially few, and it’s impossible not to be swept up in the whole thing.

Any musical obviously lives or dies on the songs, and here In The Heights shines. From the  breathless exuberance of the title number, to the pent excitement and tension of “96,000”, to the literal dancing in the streets of “Blackout”, it’s hugely infectious and bound to send plenty of viewers home to listen to the original Broadway recording. And that’s not even getting into the heart-rending double whammy of “Paciencia y Fe” and “Alabanza”, the former of which gives Claudia centre stage and sees the film briefly become a period piece as she reminisces about her youth. Director Jon M. Chu helmed two of the Step Up movies earlier in his career so he knows his way around a dance sequence, and the ones here will have you wanting to get up and dance in the aisle. Just try to get through “The Club” without wanting to join in.

Miranda wrote In The Heights quite a bit earlier than Hamilton, and if it’s less formally daring in its structure, being more of a classical musical, it’s still every inch “an American musi-cal”. It shares many of Hamilton’s preoccupa-tions, chiefly the immigrant experience, but has others all its own: the value – and necessity – of championing the community and preserving one’s culture while becoming a part of some-thing bigger. It’s a significant film in that regard, giving the spotlight to a cast of young Latin American actors and showcasing people and communities too rarely seen on screen. The fact that it’s so wildly entertaining and so profoundly moving as well speaks to the value of telling these kinds of stories; how many have we missed out on over the years?

In The Heights is a joy and a triumph, a superb showcase for a group of huge young talents who deserve to become stars, and a reminder if one were needed of Miranda’s lyrical bril-liance. (Be sure to stay all the way through the credits.) It’s been too long since we had a movie musical this good, and the gauntlet is well and truly down for Spielberg’s new take on West Side Story.

In The Heights. See it, so it doesn’t disappear!