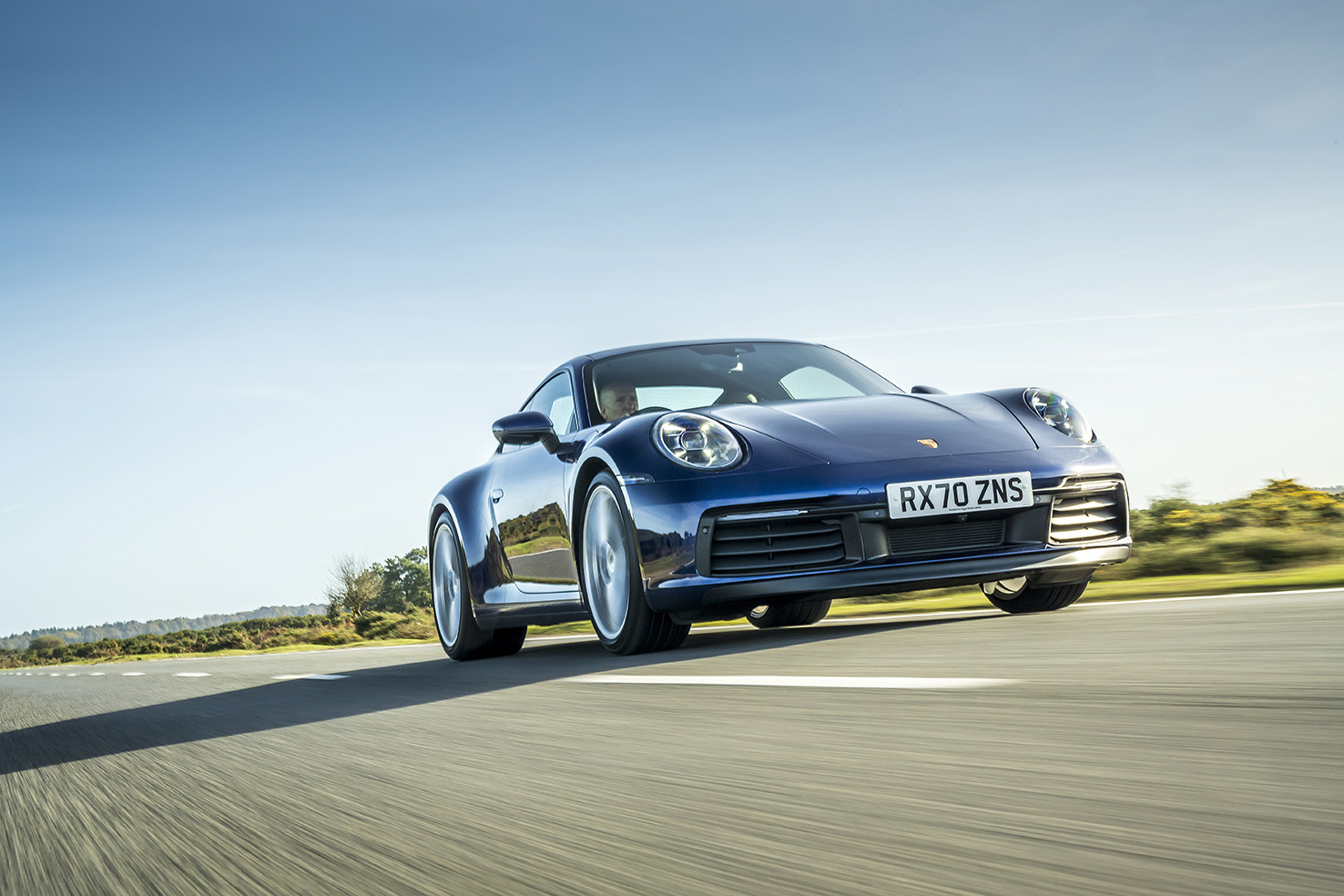 The familiarity is instant, you simply couldn’t be in anything else. As soon as you’ve lowered yourself into the tombstone seats, tilted them accordingly – to provide just the right amount of under thigh support – and pulled the thick-rimmed steering wheel towards you so that your arms are still slightly bent, everything else just falls nicely to hand. Modern Porsche 911s just fit. And by fit, I mean in the same way a Saville Row suit does: comfy, beautifully put together, and there’s no superfluous material. The electric window switches, and the neat little ones that adjust the mirrors, are on the doors, right where they should be; heater and air-conditioning controls, and the volume switch for the radio, are proper, tactile, knurled knobs, rather than will-it won’t-it work sliders or electric touch-pads; the indicator and wiper stalks feel almost identical to the ones you’ll find in many a VW… everything moves with that beautifully engineered, Germanic, precision.

So too usually, do the aluminium paddle shifters – most 911s these days are automatic – and those chunky and cold to the touch levers are normally just a finger stretch away. However, in this particular example of Porsche’s evergreen coupe, said shifters are notable only by their absence, so too the stubby same-as-Golf gear selector that usually sits in the centre console.

This is the Porsche 911 Carrera S manual.

Now, if you’re not that familiar with your 21st century rear-engined Porsche sports coupés here’s a little guide.

The current 911 range (that’s the 992, to be precise) starts with the Carrera. The Carrera S sits one rung above. It is, as has always been the case with 911s, a 2+2 coupe, powered by a six cylinder horizontally opposed engined that’s famously mounted behind the rear axle. You put your luggage and your petrol in the front – like in an original Beetle (Surely you know the connection). In this case, power, a healthy 460bhp of it, is fed exclusively to the rear wheels – you need a Carrera 4 to get four-wheel drive. One other thing: The engine, now water-cooled rather than air-cooled as was once the case with all 911s (and beetles), is a 3.0 litre twin-turbo. But, this isn’t a 911 Turbo, that’s a similar looking yet very different car altogether. 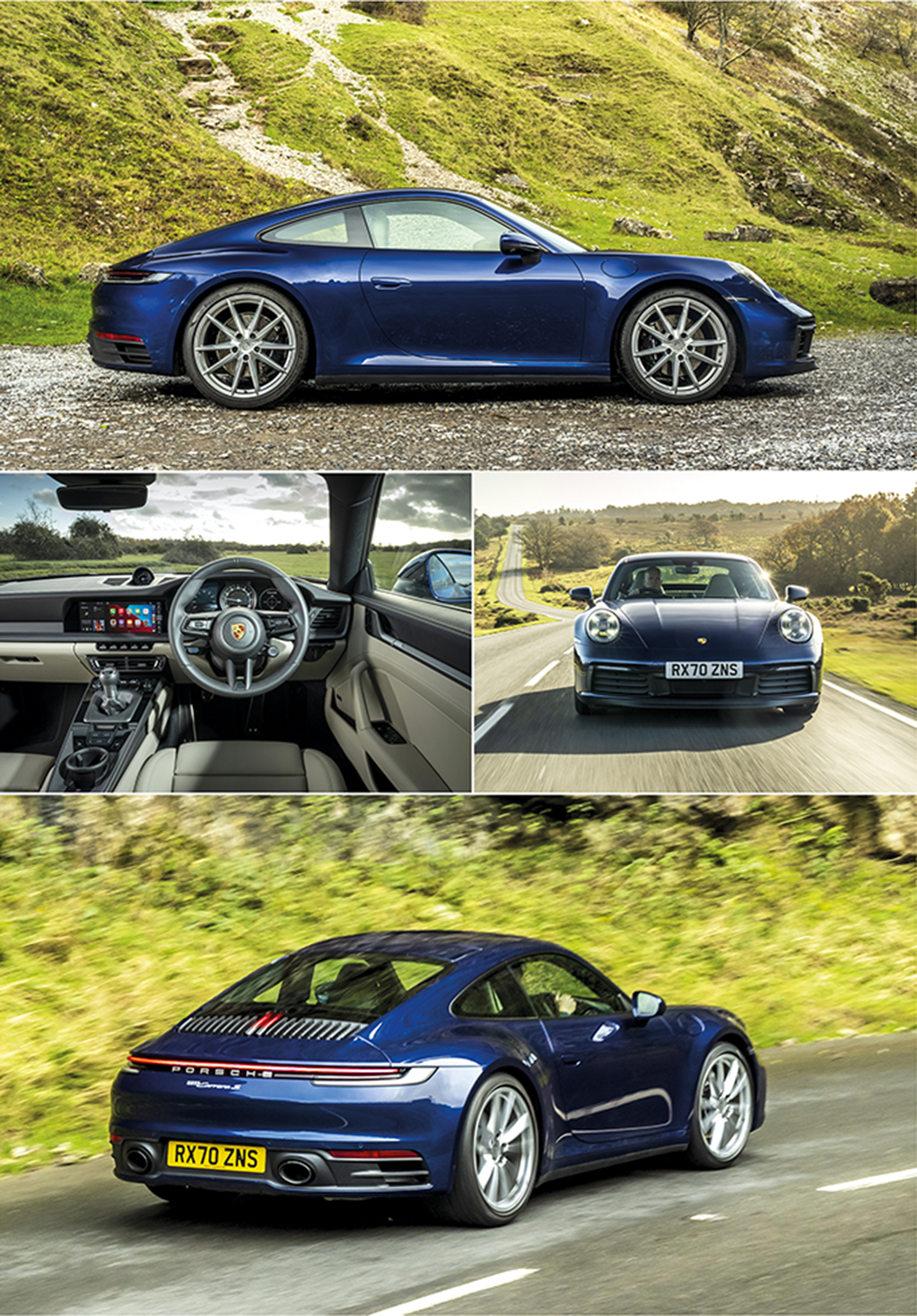 Of course, you can have your Carrera S with an 8-speed automatic gearbox, and very, very good it is too. I’ve driven it; I know. And, if I spent most of my time driving in town or in heavy traffic, the auto, or PDK in Porsche speak,  is probably the one I’d go for. However,           there’s just a certain something about a manual, a connection, a tactility, a pleasure, that the auto – to me a least – just can’t quite match.

And then there’s the fact that the manual box is combined with Porsche’s Sport Chrono option, which includes dynamic engine mounts, a mechanical limited slip differential, steering wheel drive mode switch that allows the selection of Normal, Sport, Sport Plus and Individual modes, and Porsche’s new tyre temperature readout that first saw light of day on the aformetioned 992 Turbo. It can only be selected on an ‘S’ model, and should you tick that particular box come ordering time, it also lowers the kerb weight by 35kg. So for the first time, the Carrera S tips the scales below 1,500kg.

Bizarrely, despite the diet, the manual Carrera S is slower than the auto – the benchmark 0-62mph dash taking just over 4 seconds. In the auto it’s closer to 3. But will you actually notice such things? And besides if you select second gear and let the rev-counter needle go fully clockwise, you’ll be doing more than the legal limit anyway. Performance, in reality rather than on paper, is simply not an issue.

And neither is usability. Yes, you can read elsewhere that the long-legged ratios in the Carrera S’s gearbox mean that Second and Third are all you’ll ever need on your favourite B-Road. And on certain days when you’re “commited” that might well be the case. But, even if you are fortunate to have the £90K + that means you get to drive a 911 daily, are you going drive it daily like Vic Elford used to? (Google him, you won’t be dissapointed). Slip the lever into Fifth or Sixth – you’ll only ever really need Seventh on motorways – and the Carrera S plays the GT role as well as it does the Targa Florio winner. Driven, shall we say normally, there’s no reason why you shouldn’t regularly see over 30 mpg. Impressive stuff, and especially so in something that’s also capable of 191mph.

As I said, most 911s these days are automatics, Porsche predict fewer than one in ten of 911 buyers will pick the manual option. Call me old fashioned if you like, but personally I think 90% of Porsche 911 buyers really don’t know what they’re missing.

Many thanks to Rob at Porsche’s UK press office for the loan of the 911 Carrera S.