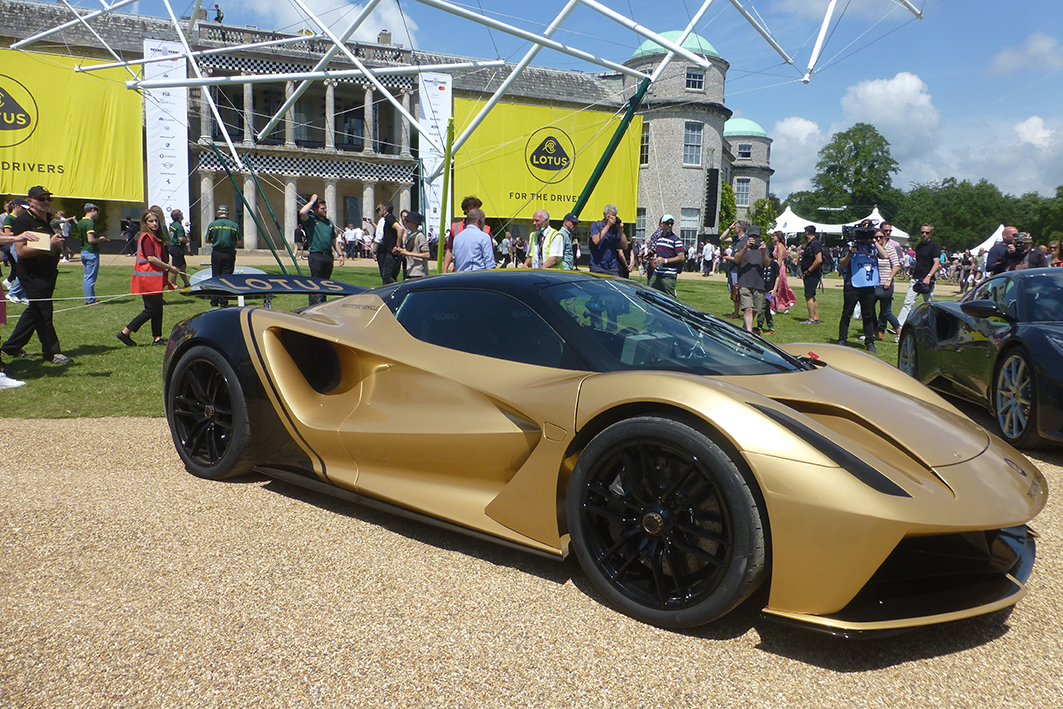 Lotus Emira wows the crowds at Goodwood Festival of Speed

Unquestionably, the star of the show, the Lotus Emira has made its dynamic public debut at this year’s Goodwood Festival of Speed.

In front of tens of thousands of passionate motoring fans, the all-new Lotus sports car took part in the Hill Climb, visited the Michelin Supercar Paddock live stage and took part in the spectacular Lotus Moment parade in front of Goodwood House – complete with Lotus-themed yellow and green fireworks.

Huge numbers of visitors came to the Lotus stand to see the Emira up close. Such was its popularity that crowd control measures had to be implemented within minutes of the Goodwood gates opening at 7am, and a queueing system to access the stand was in force all day. Many were keen to discuss details of the car’s spec and place their Emira order via www.lotuscars.com. Matt Windle commented: “Our stand staff didn’t stop talking to people about the Emira all day. So many love the way the car looks inside and out, and wanted to share how thrilled they are to see the transformation that is taking place at Lotus.” 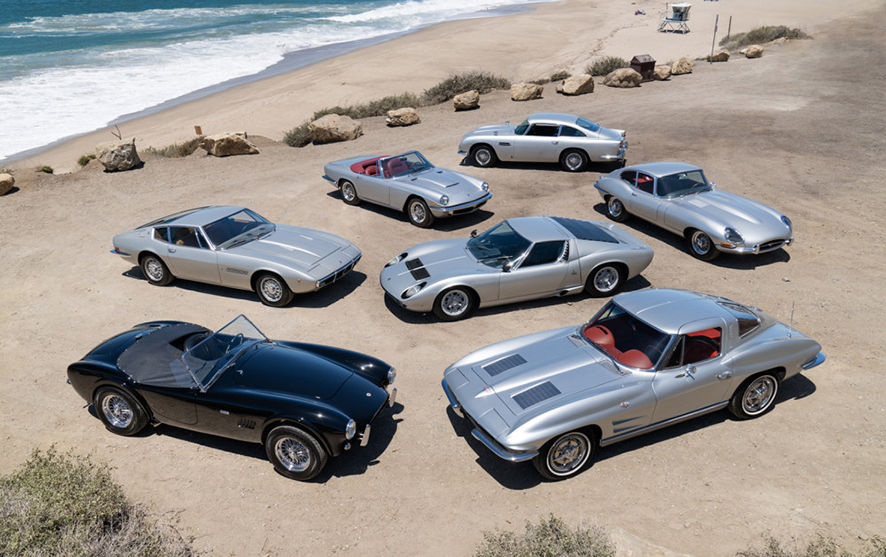 Gooding & Company, the official auction house of the Pebble Beach Concours d’Elegance, is honoured to announce its offering of the world-renowned rock drummer and lyricist Neil Peart’s collection of classic cars at its 17th annual Pebble Beach Auctions. The incredible opportunity to bid on these extraordinary classic cars, dubbed the “Silver Surfers” by the legendary musician, will take place at the company’s two-day sale on August 13 and 14, 2021.Considered one of the greatest rock drummers of all time, the late Neil Peart had a highly distinguished career as the percussionist and lyricist for the groundbreaking band Rush, hailing from Toronto, Canada. Peart inspired countless numbers of fellow rock stars and aspiring young musicians alike. He and his bandmates were inducted into the Rock & Roll Hall of Fame in 2013, and received numerous other honours, including the Order of Canada, the country’s highest civilian honour.

Neil also had a formidable intellect which was conveyed in his lyrics, books and numerous articles for a variety of publications. He was a prolific writer who constantly worked on his craft during his down time from the band.

Peart’s love of cars was a lifelong passion, and his hunger for knowledge included learning everything there is to know about automobiles, inside and out. Classic cars were what he dreamed of owning for many years, and upon purchasing his first, the 1964 Aston Martin DB5, he exclaimed that he had dreamed of owning this car since he was a boy. Finally, in a position to purchase classic cars of this quality, he slowly and carefully acquired each car until his dream collection, the “Silver Surfers,” was complete. Sadly, Mr. Peart passed away on January 7, 2020. 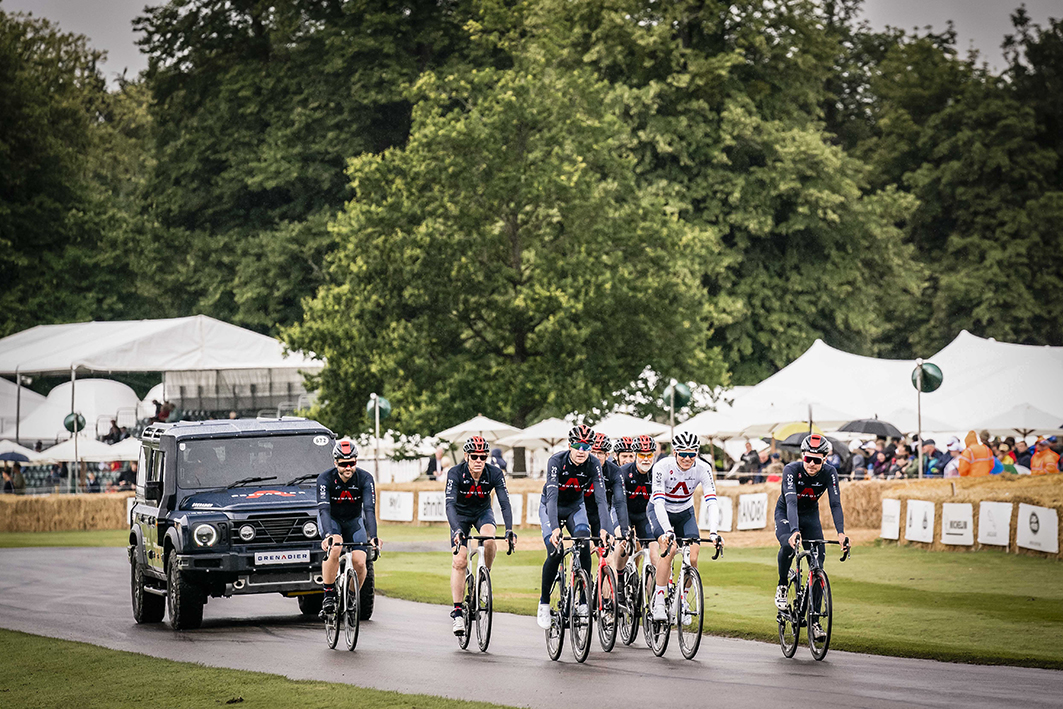 The INEOS Grenadier made its first ever run up the Goodwood Festival of Speed’s iconic hillclimb, with the support of the wider INEOS family. The new 4×4 was accompanied by a peloton of cyclists from the INEOS Grenadiers cycling team.

As well as its first dynamic show outing, this was also the first public viewing of the Grenadier’s newly unveiled production interior.

“It’s great to be at the Festival of Speed and to see the Grenadier on the hill – another milestone in our development programme,” said Mark Tennant, INEOS Automotive’s Commercial Director. “Clearly we weren’t looking to break any speed records, but we have been delighted with the opportunity to show the vehicle off, following hard on the heels of our reveal of the interior last week – and equally delighted at the reception we have had from Goodwood visitors.”

The interior of the INEOS Grenadier is designed on purpose, to deliver the space, practicality and versatility owners need from a hard-working 4X4. Starting from a clean sheet, the design also cleverly incorporates the modern technology and comfort expected of a vehicle for the 2020s and beyond.

Visitors to the Festival of Speed saw the Grenadier in the event’s First Glance Paddock, where the off-roader is enjoyed a conspicuously high-riding presence alongside low-slung supercars and luxury coupes.

Reservations will open in October 2021 and deliveries will start from July 2022. 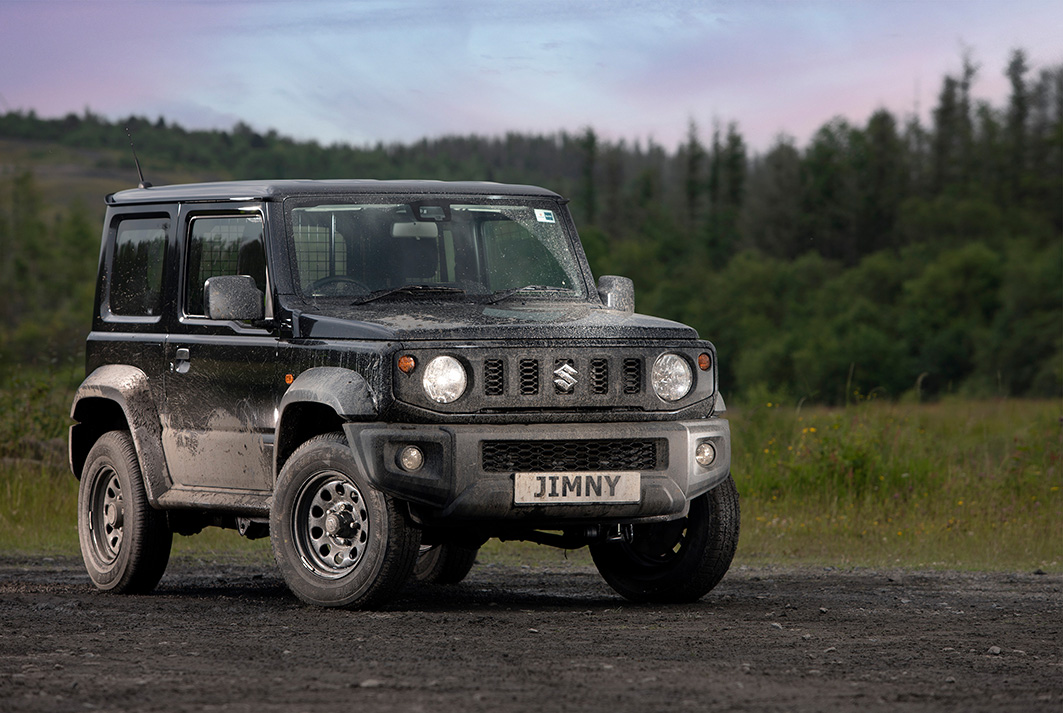 Suzuki has now introduced a new two-seater Light Commercial Vehicle (LCV) version of its small and lightweight off-roader, the Jimny. Since its global launch in 2018, the car model has attracted both private users and professionals who seek authentic off-road performance.

For enhanced utility, the light commercial vehicle model has a large 863-litre capacity, 33 litre more than the passenger vehicle model when rear sear seats are folded down, with a flat floor for better practicality and safety partition that protects cargo from moving into the cabin. 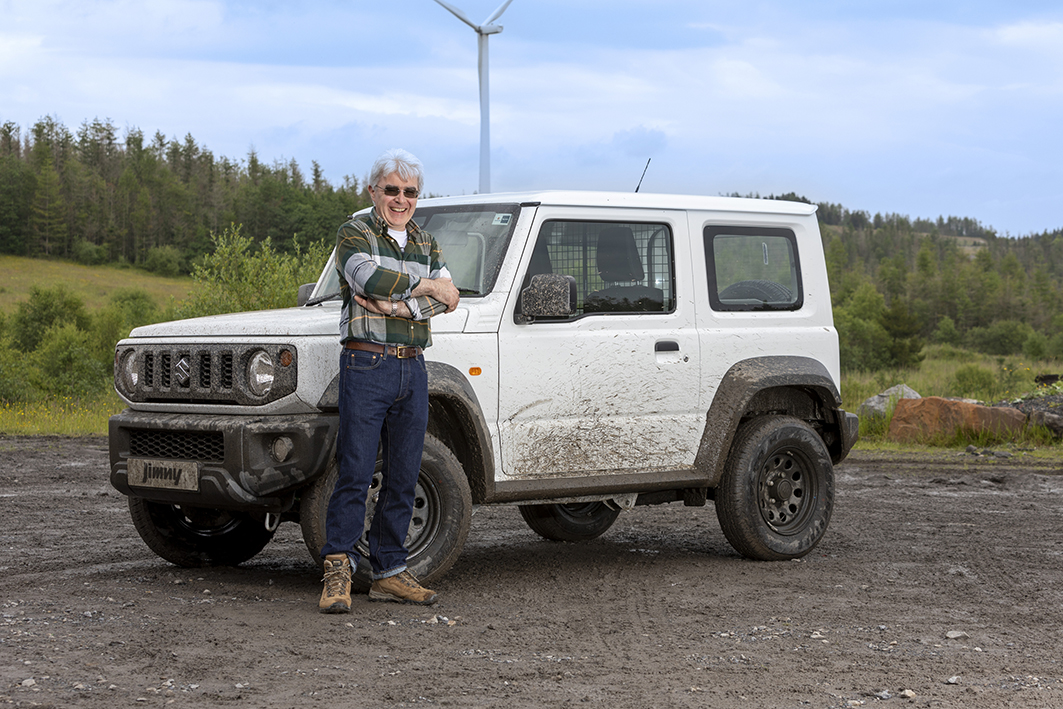 Liam with the Suzuki

For enhanced peace of mind when driving both on and off-road, the LCV model comes equipped with the same safety features as the passenger vehicle model including Dual Sensor Brake Support (DSBS) which employs automatic brake to help avoid a collision, and hill hold and descent control that support driving on slopes. In addition, eCall, an emergency messaging function following a collision is also available as standard equipment.

With one model available, pricing is £16,796 excluding VAT (£19,999 including VAT) as a Solid colour. The new LCV model will be available in very limited numbers in the UK in 2021. 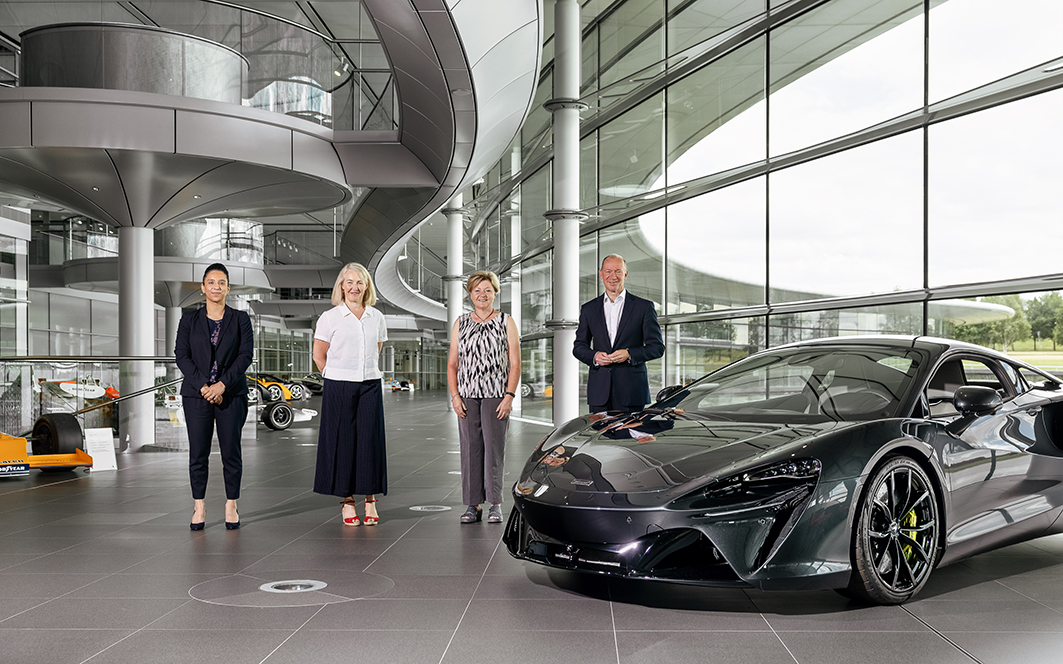 Plan International and McLaren Automotive together pledge to support, empower, and inspire the next generation to reach their full potential.

The new partnership brings together McLaren Automotive’s long-standing commitment to inspire and encourage young people to take up careers in science, technology, engineering, and maths (STEM), with Plan International’s track record of challenging gender stereotypes to support girls globally to stay in school and open opportunities to pursue fulfilling careers.

For more than eight decades, Plan International has been working with children globally, making sure they have access to the education, health care, clean water and future opportunities they need to thrive.

The charity now works in 75 countries around the world to advance children’s rights and equality for girls.

Supercar company McLaren Automotive was founded a decade ago and now operates in over 40 territories around the world. To support the development of some of the most innovative cars in the world and key new technologies, McLaren is committed to developing and inspiring the next generation of engineers, scientists and designers, by deploying its network of McLaren STEM ambassadors to talk to children – and parents alike – around the world to enhance the perception of education and careers in the automotive industry.

As part of its broader sustainability objectives, McLaren Automotive works with the likes of the BBC and LEGO, as well as schools, universities, and colleges, to promote STEM and careers, promote powerful male and female role models for children, and to empower parents and guardians to have positive education conversations.

“We chose Plan International because we both share a deep passion for improving children’s access to education around the world, with Plan International able to contribute its considerable expertise and skills to McLaren’s own long-standing drive to furthering young people’s educational choices and standards.

“Welcoming Plan International is a proud moment for all of us at McLaren Automotive and we are thrilled to get going on our partnership. Look out for exciting news of what we have planned in the coming months.”
Mike Flewitt, Chief Executive Officer of McLaren Automotive. 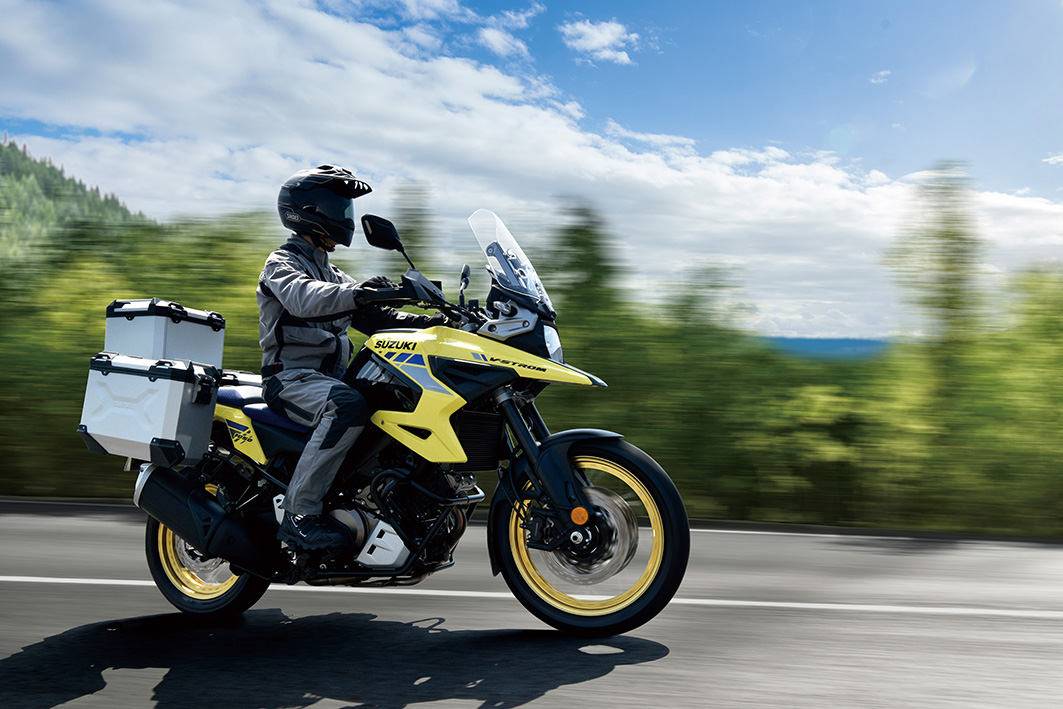 Suzuki has announced three summer saving deals, running until the end of September and covering much of the on road range.

As part of the offer the already well-equipped V-Strom 1050XT Tour can be had for £142 per month over a three-year PCP deal with a £2000 deposit or trade-in.

A similar three-year, 3.9% APR representative offer – also on PCP or HP – is available on the GSX-R1000R, including the limited edition 100th anniversary model, and the GSX-S750. This time the deal is sweetened with a £500 off test ride incentive.

The third summer saving offer from Suzuki this season is the continuation of the 0% APR representative deal available on the Katana.

Requiring a minimum deposit of £500, customers can enjoy the Katana over a three-year HP deal. And with just £500 put down, it can be ridden for £310 per month. However, being a HP deal, there is no final balloon payment.