As live theatre – and the sunshine – makes a hesitant return, outdoor theatre seems to be the best option for those in search of some socially distanced theatrical entertainment this summer.

One such company embracing the opportunity of taking theatre to the streets is Swansea’s very own Fluellen Theatre Company, who have revived a popular outdoor production based on the hometown haunts of Dylan Thomas and are also working hard on a poignant new indoor production also inspired by the city’s most famous son.

To begin with, their walking tour which includes performances of Dylan’s most well-known words in and around the city centre returned in July and will continue throughout the summer with two confirmed dates in August. Tickets are on sale now for Sunday, August 1 and 22, but you’ll have to be quick – the July date was a sell-out. 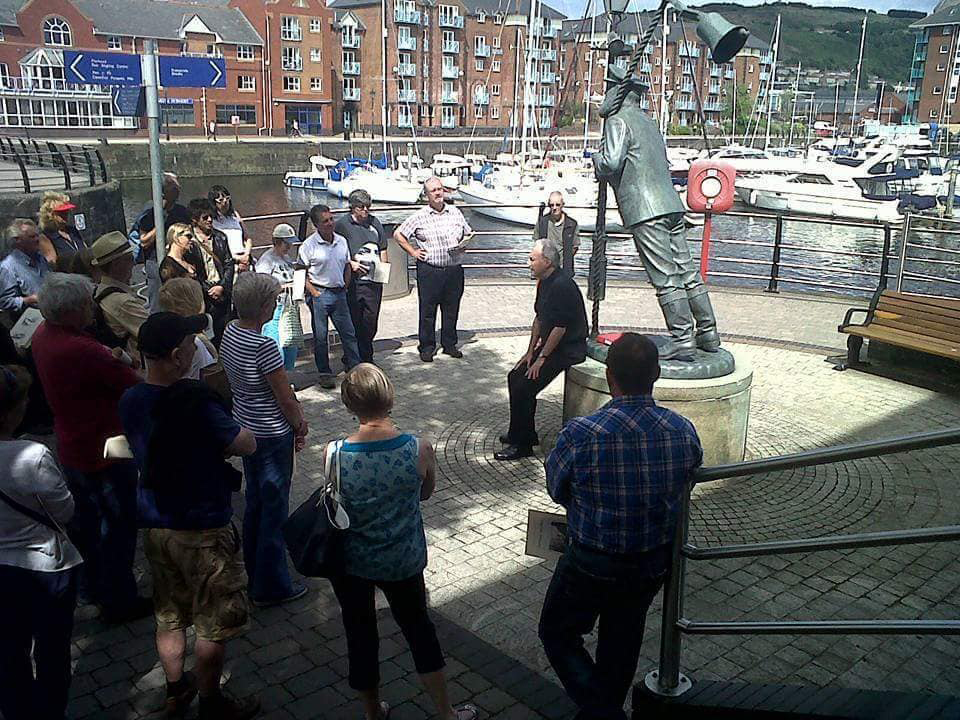 First introduced in 2014 to mark the bard from Cwmdonkin’s centenary year, literature lovers from around the world have joined the team for their fascinating trek around Dylan’s Swansea, which starts at the Dylan Thomas Centre – where else? – and traditionally ends in one of his favourite watering holes.

That’s not, however, the only Dylan-themed production coming our way from Fluellen. The indoor production Dylan Was Here! marks the return of their Lunchtime Theatre, an ongoing series which highlights some of the best in new writing and which has been running at Swansea Grand Theatre’s Arts Wing for many years.

Dylan Was Here! will be staged at venues across the south of Wales this September (dates TBC) and will commemorate another much-loved and much-missed Swansea writer, Fluellen-regular Ray Williams who sadly passed away in January. The play is described as a comedy “typical” of his style, which is a sure sign of a good few laughs, and is set in a pub in Laugharne, where it tells of “the gulling of some American tourists who believe that they are buying priceless Dylan Thomas memorabilia.”

Artistic director Peter Richards (pic left) said: “Dylan Was Here! will be an important show for Fluellen and not just because it would have been our next Lunchtime Theatre before Covid struck and lockdown was enforced. It is written by Ray Williams one of the first and certainly one of the most popular writers for Lunchtime Theatre. In total we had produced nine of his comedies. He was present at the play’s first reading in March 2020, which is as far as we got, so the production will almost take on the mantel of homage to a lovely man an excellent playwright.”

The Lunchtime Theatre series will continue in October and November with Confessions of a Call Centre Girl by Kate Bowman, after which Peter will turn his attention back to some major productions for 2022 including Shakespeare’s comedy Much Ado About Nothing and two works from Philip Burton – the Port Talbot teacher responsible for discovering a certain Richard Burton – with a revival of his Granton Street and the world premiere of its sequel White Collar.

If that wasn’t enough, there are also plans afoot for even more ambitious outdoor productions, but in these uncertain times it’s very much a case of watch this space – and keep your fingers crossed!