Danielle Milliner is the publicity officer for the Mumbles amateur rowing club. Here she updates us on all that has been happening on and off the water. 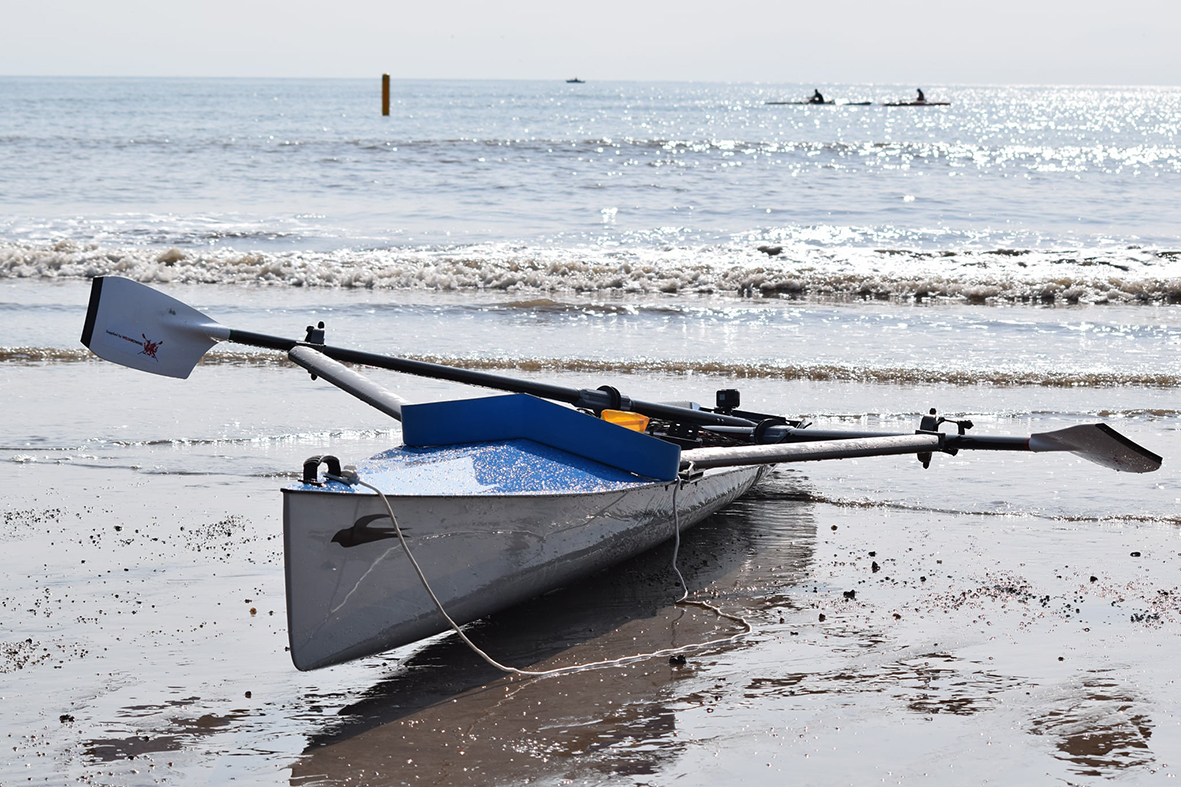 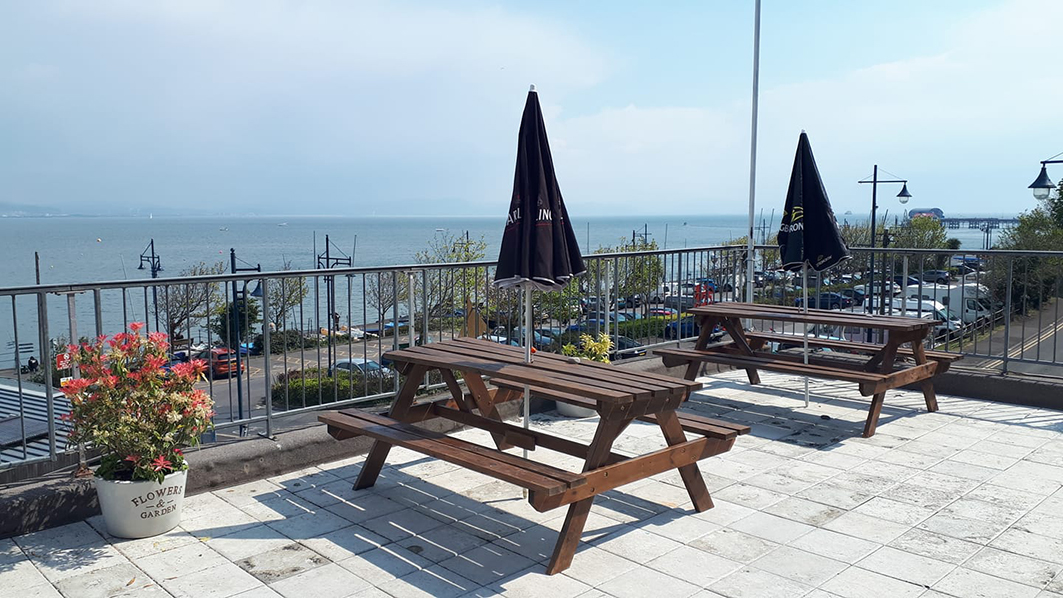 Mumbles Rowing Club is now back on the water, training and enjoying our sport after a long lockdown. We are delighted to announce that we have a new home with Mumbles Yacht Club and have been made to feel most welcome. There are wonderful facilities here (for both adults and juniors), as well as a great bar and a spectacular rooftop terrace with stunning views across the bay it’s a perfect place to relax, socialise and enjoy a beer or a soft drink after rowing or sailing.

Unfortunately, due to Covid restrictions this year we have been unable to travel and compete in our Welsh Sea Rowing (WSR) League races with other clubs around the Welsh coastline. Despite this we were able to compete in a rather exciting new event, this was the ‘International Five miles from Home Series 2021’. This international event was envisioned by Castle to Crane, Scotland last year and became a reality this year when they approach-ed Ocean to City, Ireland, who then approached Welsh Sea rowing, Wales, to host 3 weekend races. 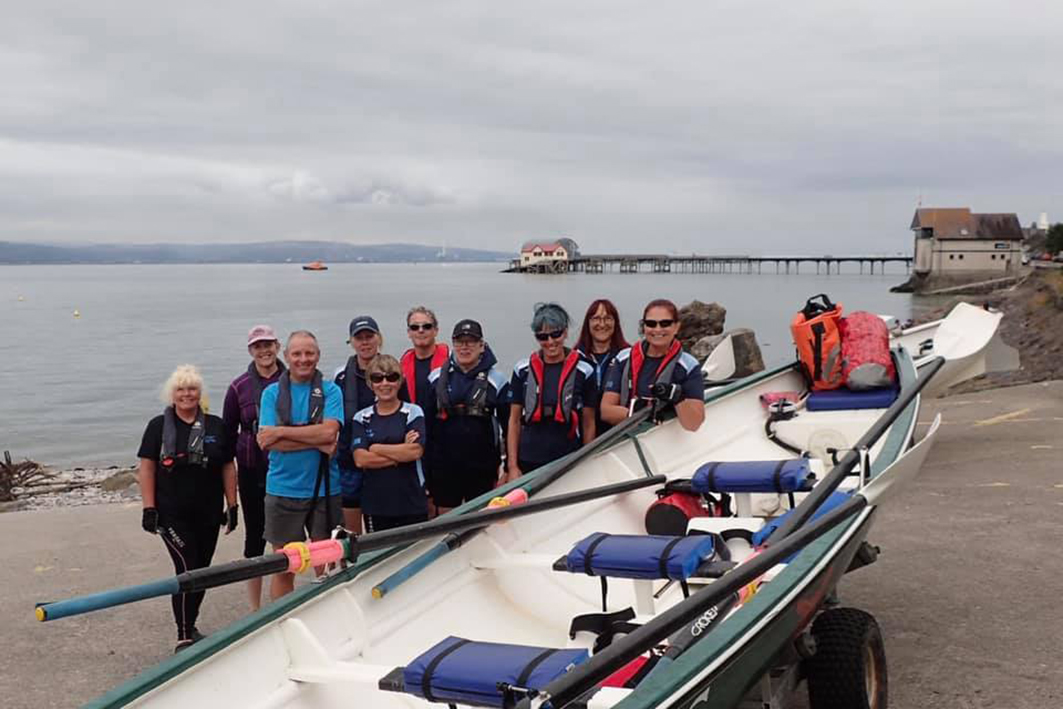 This was an amazing event as it enabled people from around the world to compete in 3 races without the need to travel (something that was not possible due to Covid restrictions). Instead, teams could take part in this international challenge by plotting a 5-mile course in their own waters, then do it as fast or as stylishly as they could during the designated time window, which was 48hrs, submit their times and join the online hooley.

There were 3 race categories to choose from:

Land Challenge: for those unable to get afloat due to restrictions, we invite you to walk, wheel or run

The whole series was extremely popular and in the final leg which was hosted by WSR, just over 1300 participants took part from around the world!

Mumbles Rowing Club competed in all 3 races and entered not only Celtic Longboat teams but also rowers in single yoles. All teams did really well and most beat their original race times. In particular Celtic Longboat team Double Dragon did exceptionally well and have just been awarded the WSR Five Miles from Home (FMFH) Trophy for their enthusiasm shown by entering all 3 races and with the best times.

The Five Miles from Home Series encouraged us all to get back training and competing on the water, we were part of a big international challenge connecting boating communities from across the world. By welcoming a variety of people-powered, sea-going craft, this event was inclusive, adaptable and great fun! And after such an awful year for everyone it was really special to feel that global connection too. WSR Facebook page was flooded by shared posts with photos and experiences of teams from countries as far away as New Zealand; it was such a joy to read. Every participant that completed FMFH will receive a soft copy Certificate of Participation too. 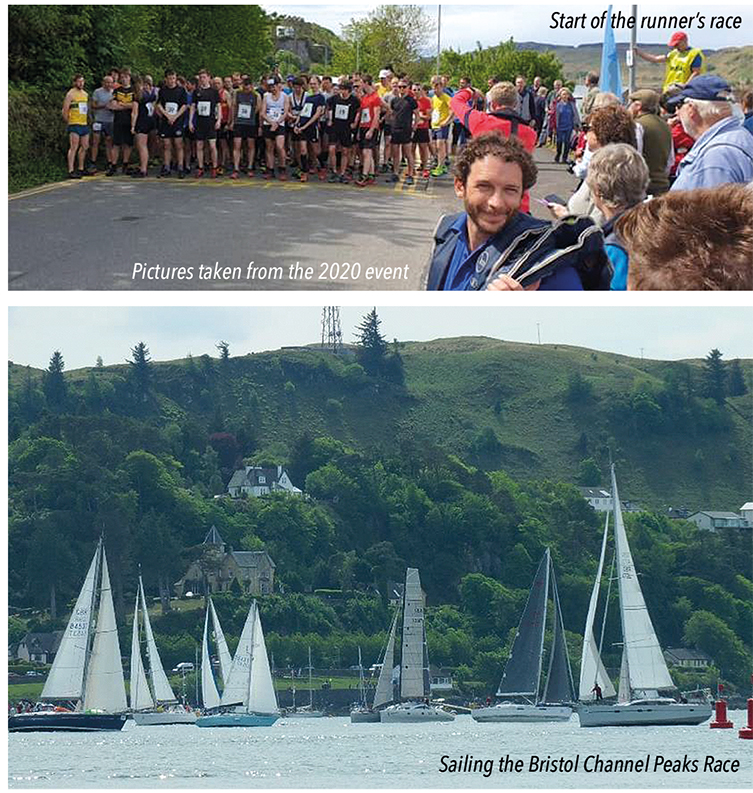 In July, Mumbles Rowers supported our fellow yacht club members Team Aurora (skippered by Oscar Chess), VA Va Voom (Skippered by Wyndham Evans) and Wizard (skippered by Richard Woffinden)’ who all competed in the Bristol Channel Peaks Race. We showed our support as they set off and I think they heard us cheering and singing to them from our boats, the customers at Verdis certainly did. Competitors started the race with a run around Mumbles Head, then a sail to Oxwich, where the runner’s race to King Arthur’s Stone on Cefn Bryn. The plan was to sail through the night to Ilfracombe, where the runner’s race to Bull Point Lighthouse. When that is complete, they sail to Porlock Weir and the runners race up to Sellworthy Beacon. Finally, they sail back to the finish line at Swansea Marina. However unfortunately, a storm came in during the night and 2 yachts were unable to get into Ilfracombe harbour, so had to return back home. The other decided not to cross the Channel. As this year was a trial, with just 3 boats competing, we hope they try it again when they’re able to and if it is successful, it will be promoted nationally. 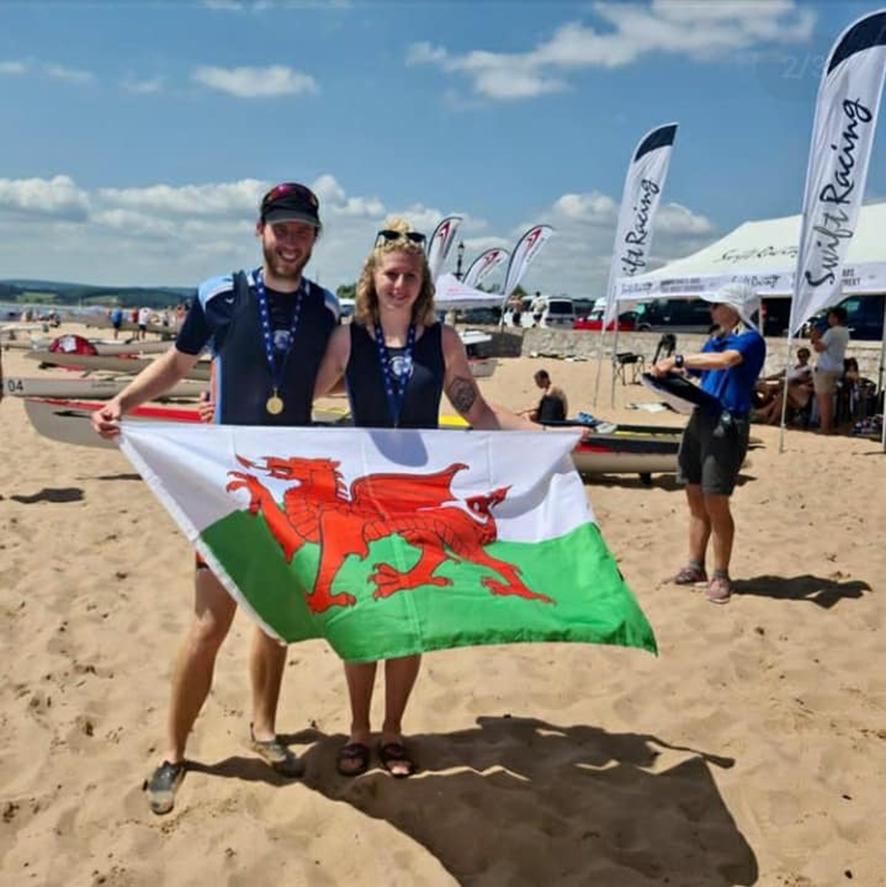 We are really proud of our club member Tom Brain who won Gold in the British Rowing Offshore Championships (July) in the mixed double scull with team partner Swyn Willams from Carmarthen Rowing Club.  As a result of their success, they are both going to the World Rowing Coastal championships in Oeiras, Portugal from 27th September to 3rd October this year. They are both planning on going to the Worlds in Saundersfoot, Wales 2022. We are all rooting for them and wish them the very best of success, they are both dedicated rowers and have put in so much hard work, time and training together.

“The 2022 World Rowing Coastal Championships and Beach Sprint Finals will be staged off Saundersfoot Beach in Wales in association with Welsh Rowing and supported by Welsh Sea Rowing. The event will take place over two weekends in October and, with the event in the Pembrokeshire Coast National Park, British Rowing is aiming to lead the way in environmentally-friendly event delivery.

It is anticipated that some form of coastal rowing will become part of the Olympic programme from Paris 2024 onwards so it’s particularly exciting for British Rowing to be hosting an event in the new Olympic discipline. Coastal rowing, as a whole, offers a fantastic opportunity for the sport of rowing to broaden its reach into the coastal communities around the world and beach sprints, in particular, presents an exhilarating new format of the sport hoping to capture the attention of a younger, more diverse audience.” 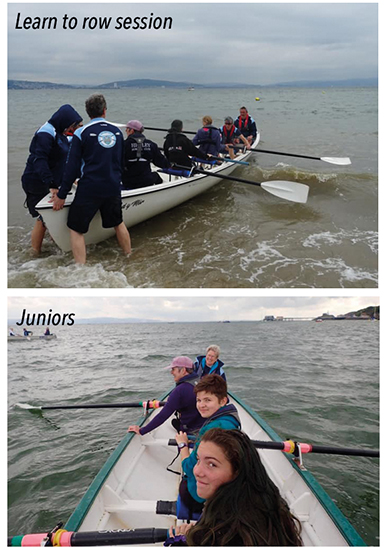 Mumbles Rowing Club is now offering free ‘Taster Row Sessions‘ for those who are interested in trying something new. We have had several taster sessions over the last couple of months which were very successful and were enjoyed by all participants (both adults and juniors) and as a result have signed up for club membership. We now have 12 new members, 8 adults and 4 juniors. We are really pleased to say that we now have a junior rowing section, something that Mumbles Rowing Club has wanted for a long time.

As well as having 3 Celtic Longboats and a double yole, we now have 3 new sculling single yoles on loan from Welsh Rowing. With the World Rowing Beach Sprint finals and World Coastal rowing Championships coming to Saundersfoot in 2022, Welsh Rowing is keen to promote Coastal Rowing to all clubs. There are a couple of other WSR clubs that have these boats too.

Anyone who would like to learn to scull or to improve their skills/technique we have dedicated coached sculling sessions on Wednesday evenings as well as opportunities on Sunday mornings. Tom Brain (gold medallist) is our coach along with Tom Walker (Swansea University rowing coach).

We have recently been awarded a grant from Welsh Rowing which has been very much appreciated as this has helped to pay for signage on Mumbles Yacht Club building to help publicise our move. We have also been able to repair our double yole and to buy some trollies to move our single yoles (it’s much easier than carrying them).

If you are interested and would like to try a new sport out in the fresh air, be it for fun, or to compete in races, then please contact us and we’ll get you a place on our next Taster Session.