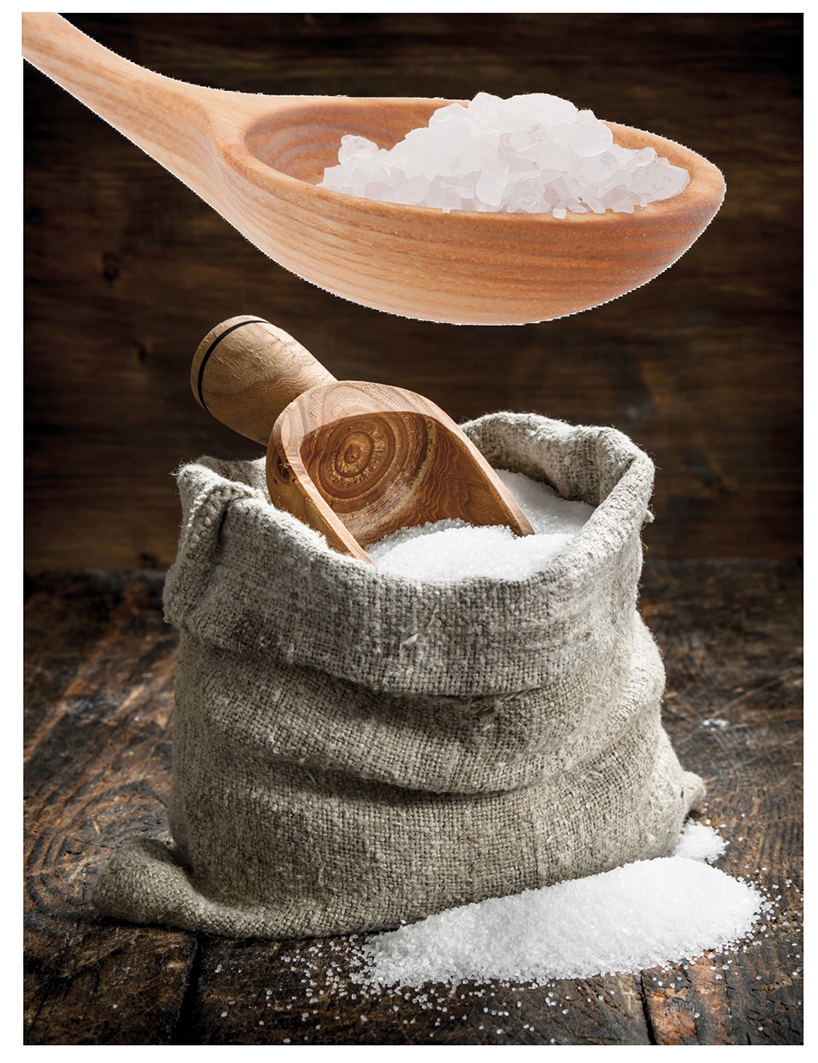 Salt, tunnels and pigeons, now, that’s a connection you don’t often make! Salt is used as part of a healthy diet, helping the body to perform vital functions. Your body uses salt to balance fluids in the blood and maintain healthy blood pressure, and it is also essential for nerve and muscle function.

Salt has been used to preserve food and improve its taste for thousands of years, and there is evidence to indicate that Neolithic people were boiling salty spring water to extract the salt as far back as 6050 BC.

Salt was included in the funeral offerings found in ancient Egyptian tombs. In the early years of the Roman Empire, roads were built for transporting salt. In Africa, salt was used as a currency south of the Sahara, and in Abyssinia slabs of rock salt were used as coins. In the 6th century Moorish merchants traded salt for gold – weight for weight.

The production of salt is carried out by two processes, mining or evaporation.

Historically the process of evaporation was known as open pan, the Salt Boiler would boil the water in pans for a number of hours, when the salt would crystalise, and would fall to the bottom of the pan. The Lumpman, would then rake up the salt and skim it into wooden tubs, creating ‘lumps’. They in turn would be sent to the stove house or “hothouse” to dry. The Lofter, would store the salt lumps. Finally, the salt would be sold.

It seems that this process was carried out at the Salt House, now a ruin located in Port Eynon, Gower. 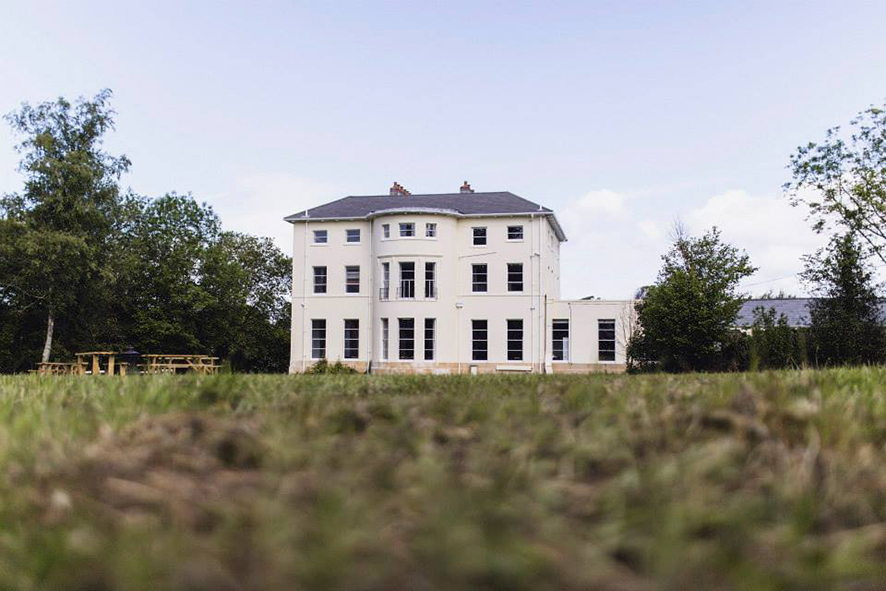 The Lucas family are one of the oldest Gower families who have been resident at Reynoldston, Gower for over 500 years. Jeffrey Lucas is the first member recorded, born in 1566. The family resided at Stouthall (pic right), in Reynoldston.

It is thought Jeffrey’s great grandson, John Lucas, b. 1583, was responsible for building and fortifying both the Salt House, in Port Eynon and Culver Hole. Legend has it that there is a tunnel connecting the two. The main purpose of the salt house – a beach structure consisting of 3 stone lined chambers with walls 1m thick – was for John and a group of lawless men to outwit the excise men, in their smuggling and piracy activities. Prior to his death, another John Lucas, who died in 1787, is thought to have found a rich vein of paint mineral and exported it from the Salt House. After his death, the building was ruined in a storm.

During the 1830s the Lucas family were involved with a lawsuit over the ownership of the building. 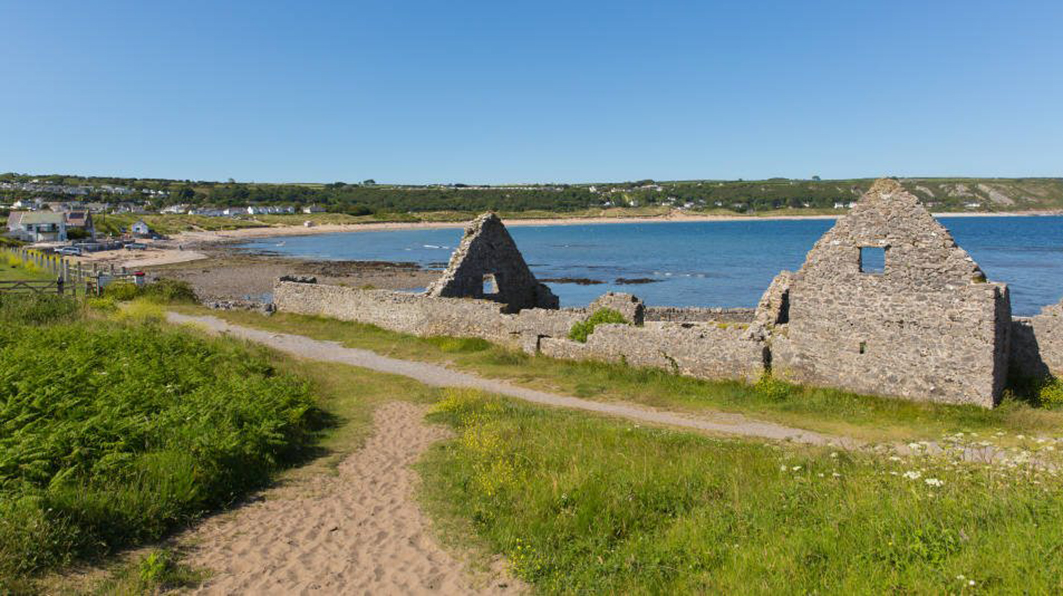 The northern end of the house, before being abandoned circa 1880, was used as an oysterman’s cottage.

The latter John’s son, also a John, inherited the Stouthall estate and set about rebuilding the house, employing the Swansea architect William Jernegan. The Stouthall plans followed those of Antony Keck’s design of the nearby T M Talbot’s Penrice Castle, 1773. Stouthall was completed during 1790-93.

Jernegan’s other works included the local Singleton Abbey and Sketty Hall.  In 1903 after Colonel Wood, the last Lucas’ son-in-law died, there wasn’t a male heir to inherit Stouthall, so it was rented to various tenants. During the First World War, it was billeted by soldiers, and from the 1920s it was used for a variety of purposes, including convalescent and maternity homes. Finally, Stouthall became a field study centre for the London Borough of Merton. 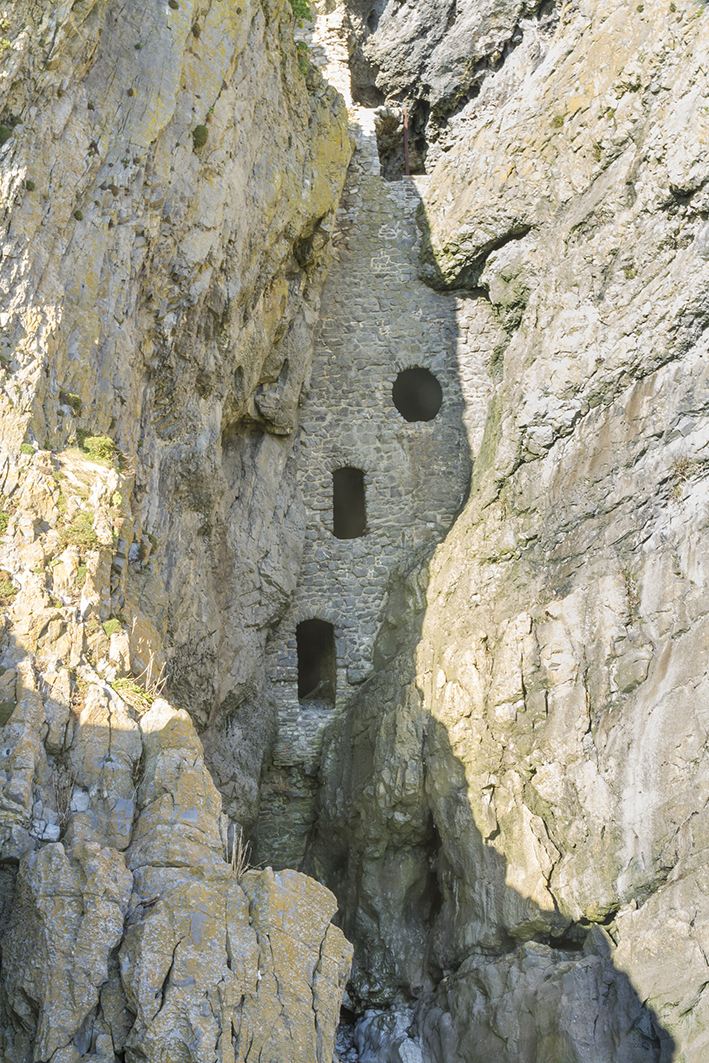 Moving on to Culver Hole (right). (Culver, the Saxon word for pigeon). These caves, located in the cliffs, west of Port Eynon have an air of mystery. Were they connected with the aforementioned smuggling, or as the name suggests, were they extra dovecotes to the others located at both Oxwich and Penrice Castles?

A little extra about tunnels. Even though there seems to be a little mystery surrounding the existence of the tunnel at Port Eynon, locally in Swansea town, there is certainly evidence of a tunnel.

Situated in the dark basement of Hanson at the Chelsea Restaurant, St Mary Street, there is a tunnel, now blocked off, which runs under the restaurant and then, along the backs of the other premises situated along Wind Street. Did these other buildings also have tunnels? And what was their purpose – more illicit dealings?

Charles is a researcher and family historian. If you
have a question regarding your family history that
you’d like to put to Charles, he can be contacted at:
swanseafamilyhistory@yahoo.co.uk
he’d be delighted to hear from you