This month we take a trip down memory lane to revisit Aesop’s Fables, learn everything there is to know about owls, find out why we’re digging our own environmental graves, celebrate the humble sardine tin, and have a double digital dose of Artificial Intelligence… 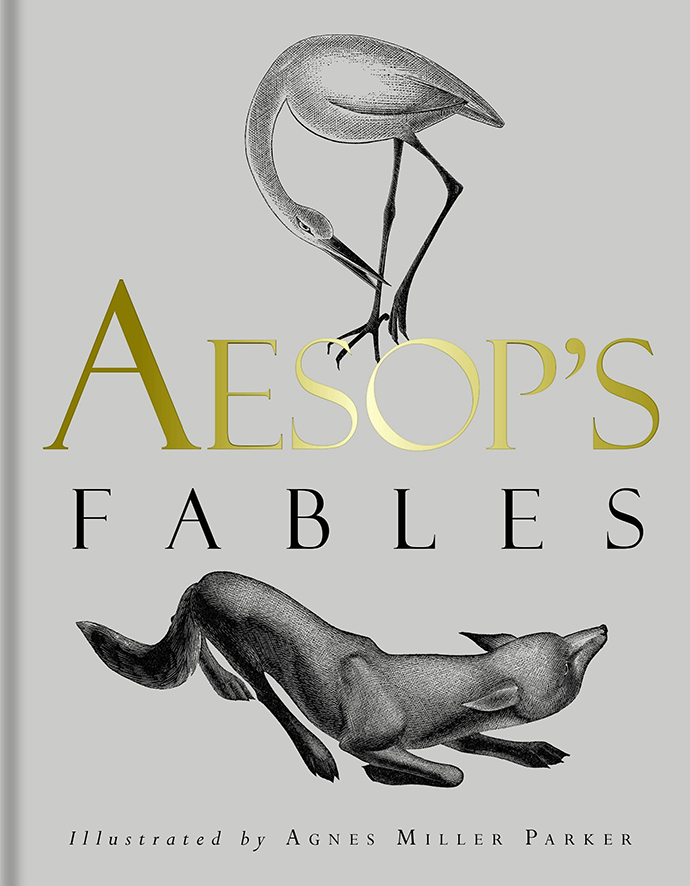 We all know the stories of The Goose that Laid the Golden Eggs, The Wolf and the Boy, The North Wind and the Sun and The Dog in the Manger. Or at least we think we do, because they’re part of our everyday language, handed down to us from our nursery school days. In fact, they’ve been handed down from a lot further back than that and can be traced through the oral tradition of storytelling to a slave by the name of Aesop, who is thought to have lived in Ancient Greece in the millennium before our Common Era. Quite how these pithy nuggets of moral wisdom – covering philosophical, religious and political themes – evolved from being an ethical guide for adults to cautionary tales for infants is something probably a little lost in the mists of time. But for those interested in such details, what we do know of the fables’ origins is explained in the introduction to this lovely edition from the Bodleian Library, who produce sumptuously illustrated tomes that bring ‘the riches of Oxford’s libraries to readers around the world through a range of beautiful and authoritative books.’ 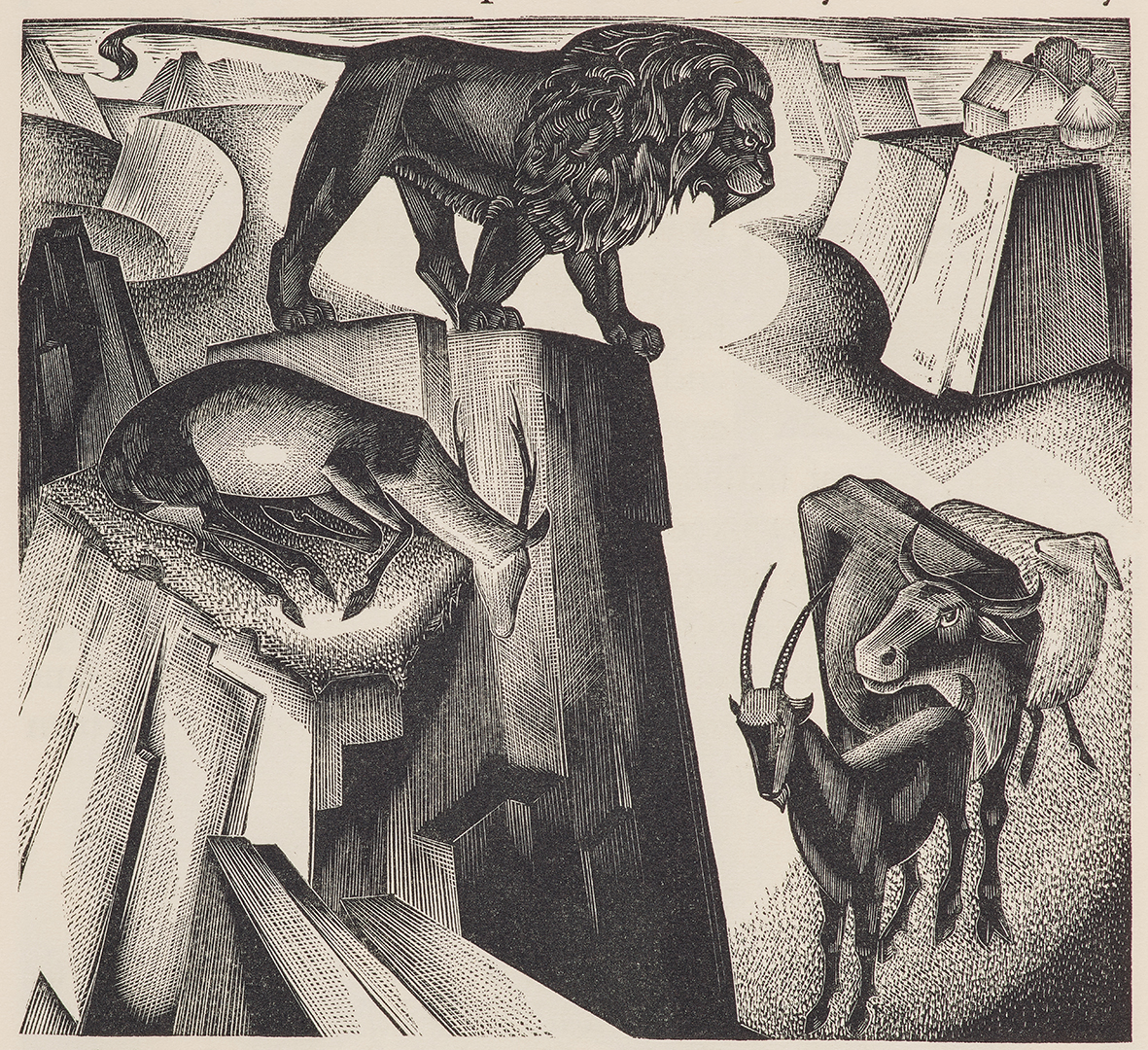 The text here is a discretely modernised version of a translation by V.S.Vernon Jones that is about a hundred years old, while the illustrations that date back to the 1930s are by the once well-known artist Agnes Miller Parker, whose engravings capture the spirit of the fables in a way that so many more modern versions simply don’t. The words and images are united on thick cream paper and bound in gold-embossed cloth to produce a coffee table book that, as a physical object, is almost as wonderful as the artistic contents within. As strange as it may seem, in our loud and angry digital world, these tales of wisdom probably make more sense now than ever they have before. And so this edition of Aesop’s Fables, so elegantly produced by the Bodleian Library, is fabulous in every (including the literal) sense of the word. 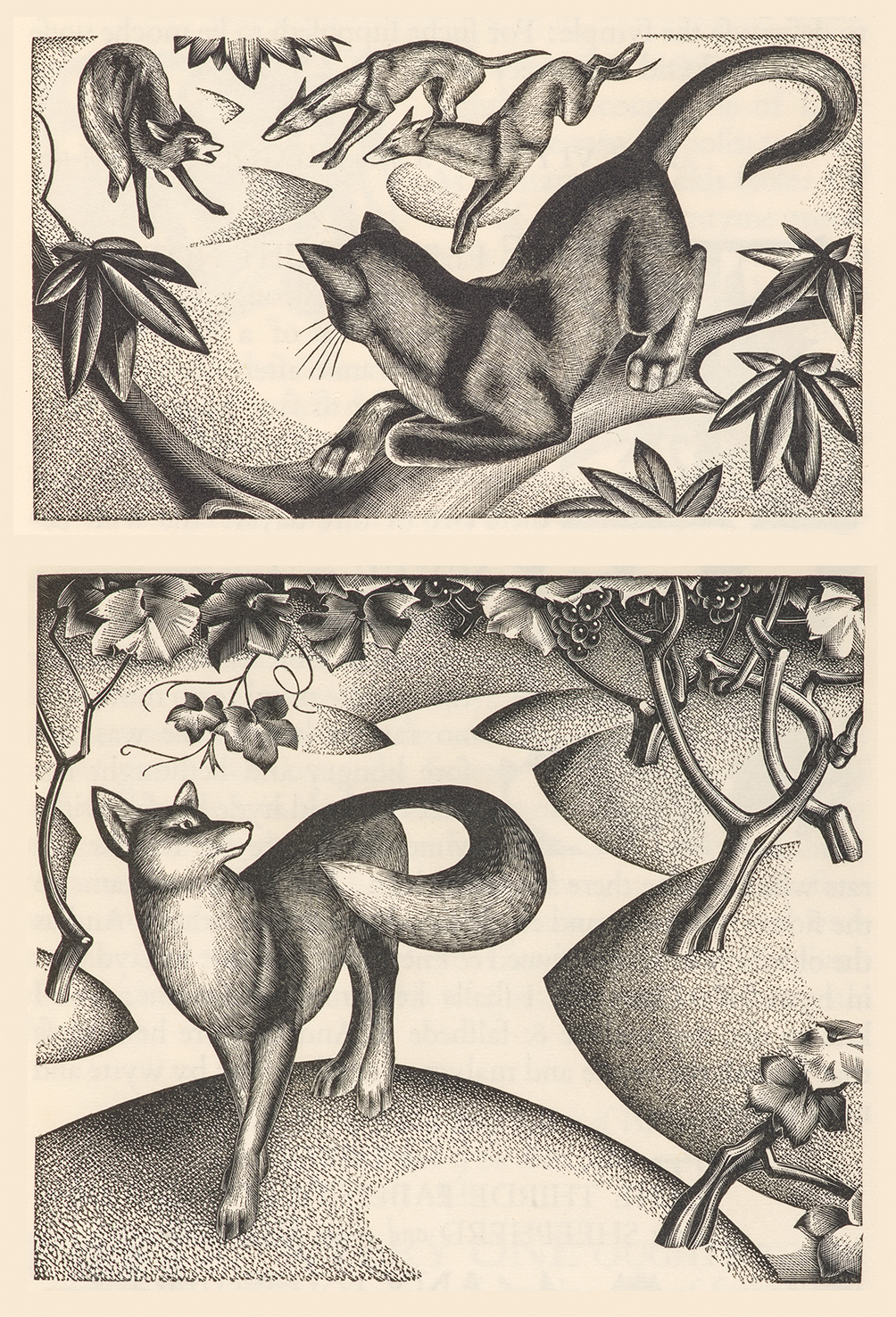 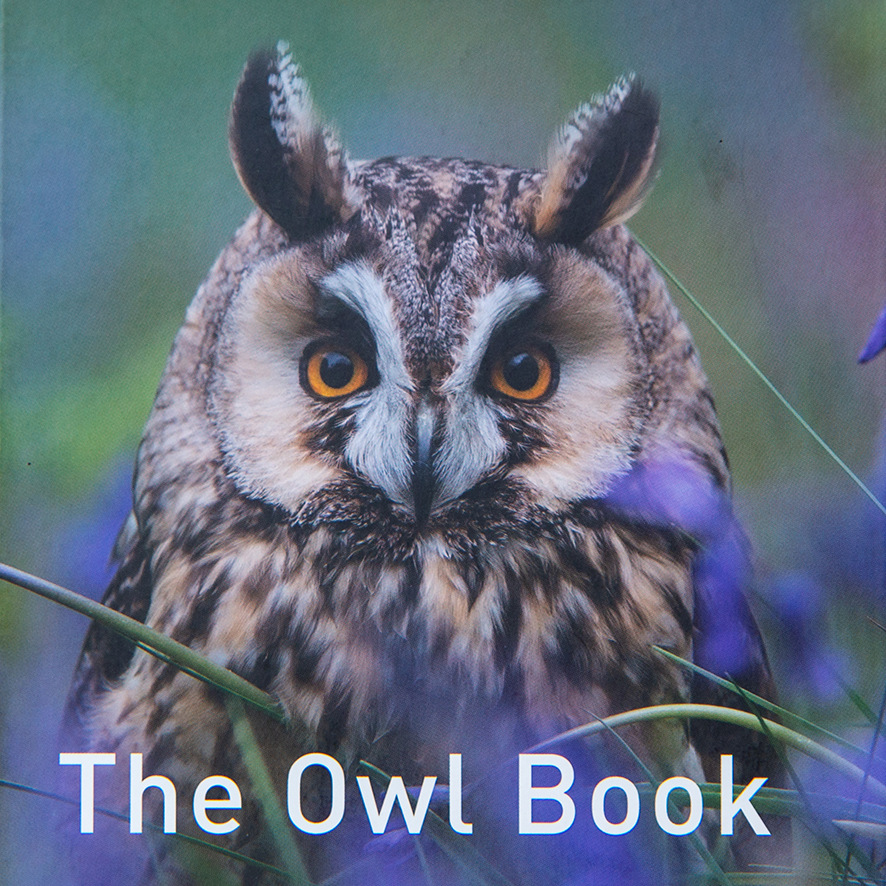 Eagle-eyed (or should I say ‘owl-eyed’?) readers of Bay will be familiar with Graffeg’s wonderful pocket-sized natural history series on British wildlife. This month’s instalment is The Owl Book by Jane Russ, and from the very first sentence – ‘Owls seem quite simple, but in reality they are quite complicated’ – bird enthusiasts are in for a real treat as Russ takes us on a tour of the four true natives to the UK (barn, tawny, short-eared and long-eared) and the three not-quite-British residents that we see from time to time on our shores (little, snowy and eagle). As Russ says, we humans have a complex relationship with this almost mystical bird. We confer wisdom upon them, fear them as a portent of death and simply can’t stop writing about them. From Aesop (see Book of the Month) through to Alan Garner’s extraordinarily atmospheric The Owl Service, owls are a staple feature of centuries of literature, including one of our most treasured and instantly memorable poems, The Owl and the Pussycat.

As books on owls go, this is a read head-turner, which brings us neatly onto the way owls seem to be able to swivel the noggin around in a full circle. Don’t be daft, says Russ: of course they can’t do that. But because their eyes are so radically different to human eyeballs (they’re actually more like tubes), they can’t move around in their sockets. To compensate, owls have developed 270-degree rotation of the head with the help of twice as many neck vertebrae as you have, 14 in all. If a human tried this, air supply to the brain would be cut off and the result would be immediate death by stroke. That’s a real eye-opener. Talking of eyes, owls have three eyelids. By now you’ll have got the point: fascinating bird, fascinating book. 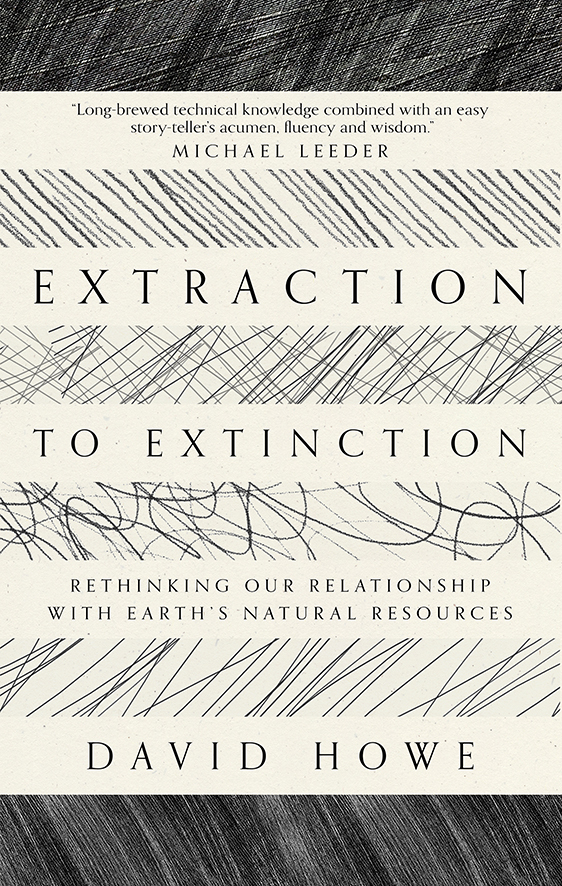 Look around you, says David Howe, and just about everything that you can see that’s a product of human agency (unless you can eat it) will almost inevitably at some point been brought to you by a geologist. From the scratch-resistant screen on your smartphone to the fuel that powers your car, it all started off underground. Living in the Anthropocene era of geological time – in other words the two hundred thousand years or so in which humans have had an impact on the planet – comes with a long bill of costs for the environment. One of the items on the invoice is the sheer amount of digging we do, scouring away at the surface of planet Earth. Howe’s Extraction to Extinction assesses what the environmental cost is so far and examines what might lie in store for our over-heated, depleted and exhausted home.

Every year, we mine, quarry, pump, cut, blast and crush billions and billions of tons of the rock that lies beneath our feet, says Howe in his impassioned narrative of how humans have abused the planet’s natural resources down the ages – both to our great advantage and, now we realise, to our probable downfall. There may have been a time, perhaps well into the twentieth century, when the assumption was we’d never run out of all these riches, or that the environmental effects of gathering them were simply negligible. But if the five millennia that separates today from the Bronze Age has taught us anything at all, it is surely that there is a huge environmental cost-difference between forging a few ploughshares and systematically flooding the world with bajillions of unnecessary and distinctly eco-unfriendly smartphones. 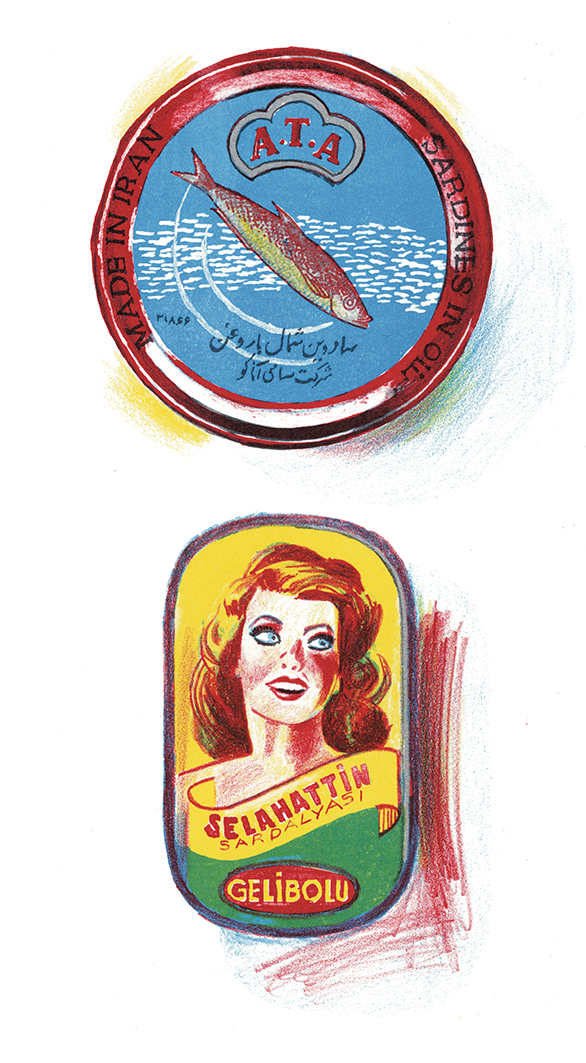 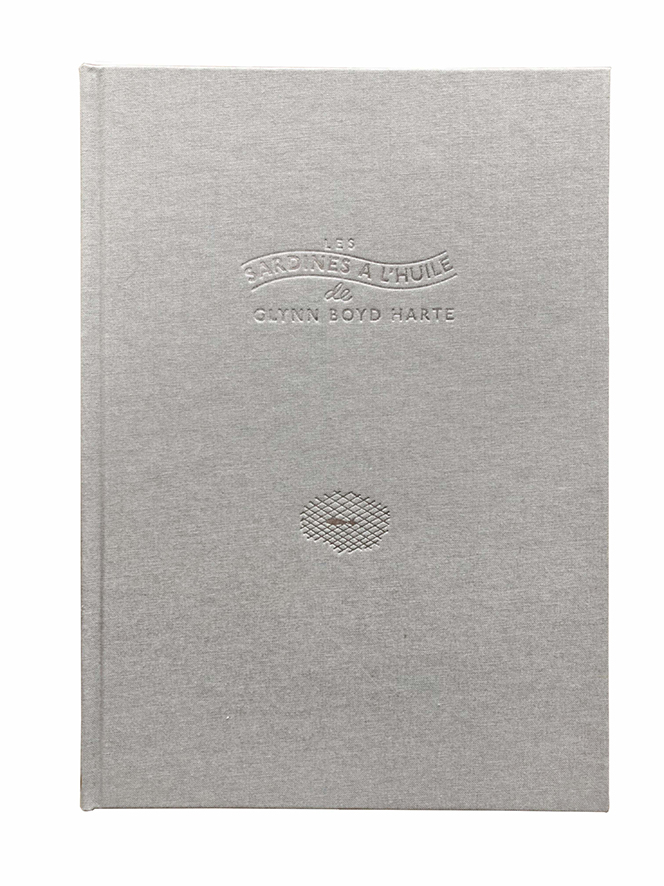 Every now and then a book lands on the desk that is so deliciously weird and wonderful that you find yourself a little lost for words. Such is the case with 20th century British artist Glynn Boyd Harte’s Les Sardines à l’huile, a uniquely irresistible little book (it’s only 40 pages long) of Hockney-esque drawings of the sardine tins he collected avidly during his travels in France and Portugal. Ever the idiosyncratic artist, Boyd Harte loved printed ephemera in all its forms and so you can see why the sub-culture of the humble sardine tin would have appealed to him: it’s almost as if sardine producers competed to produce the most graphically satisfying designs, often with a nostalgic nod to the idioms of Art Nouveau, Art Deco and perhaps even a touch of Bauhaus tucked in here and there. You easily can imagine Boyd Harte salivating over these quirky tins as much as their contents. First published as an ‘artist’s edition’ way back in 1985, original copies of Les Sardines à l’huile are serious collectors’ items and virtually impossible to track down these days. So, we’re lucky that Design for Today has come up with this gorgeous facsimile in a limited edition of 600, which inevitably means that this print run will become a rarity too: so snap one up while you can. 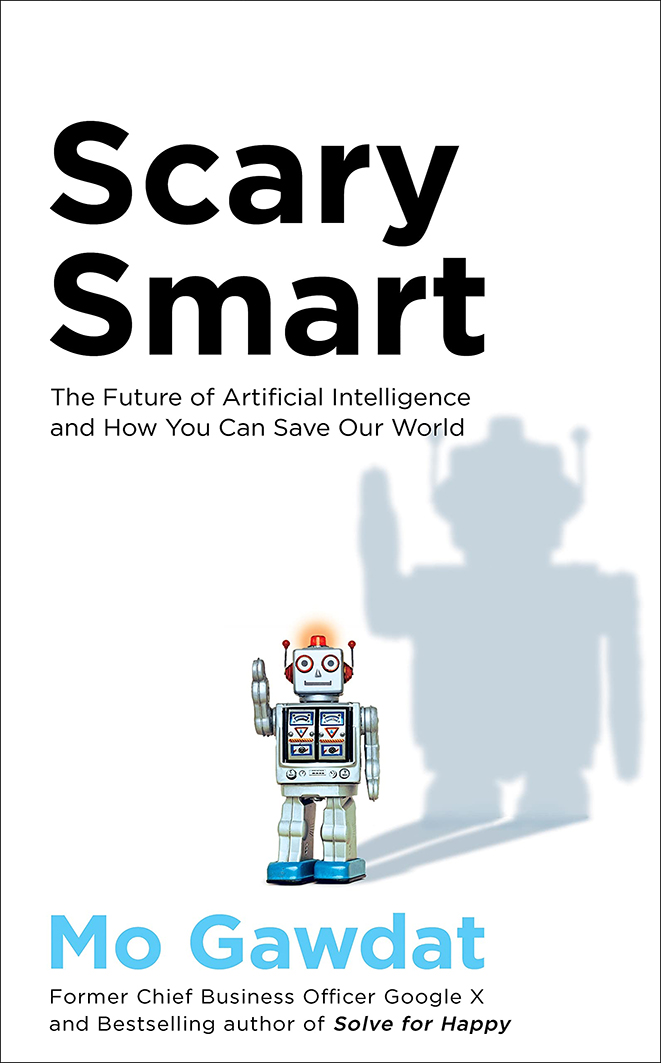 There are only three things you need to know about artificial intelligence. First, it’s coming: second, you can’t stop it; and third it will be ‘smarter than humans’. This is the central argument of Scary Smart, Mo Gawdat’s investigation into AI’s ongoing journey to the ‘singularity’ that will take place in the middle of this century. This is when machines will be ‘a billion times more intelligent’ than ourselves. If AI will become Einstein, we’ll be no more than flies. And what, asks Gawdat, is going to stop Einstein swotting the flies? It’s a good question, and one that Gawdat is well positioned to address. As a former boss at Google, he’s native to a world that’s happy to make sense of the ongoing digital revolution for us. The answer – and it’s hardly a plot spoiler because it’s printed on the cover – is ‘you’. The reader can save the world from the AI doomsday because ‘the power’ is in your hands. It’s a double-edged sword because technology has the potential for both good and evil.

Remember, he says:“if we control AI, it won’t live up to our expectations, and if we don’t, we risk it going rogue.” Don’t be worried that Scary Smart might be too technical for the non-specialist because it’s been written very much with the layperson in mind. He pauses frequently to recap with soundbites that move his argument along at a clip. His concerns are clear enough: remember that “a good machine in the wrong hands is a bad machine”, and that “it’s not clear whose interests the machines will have at heart”, while it remains possible that “intelligent machines will feel more emotions than we can ever feel.” Fascinating and frightening stuff. 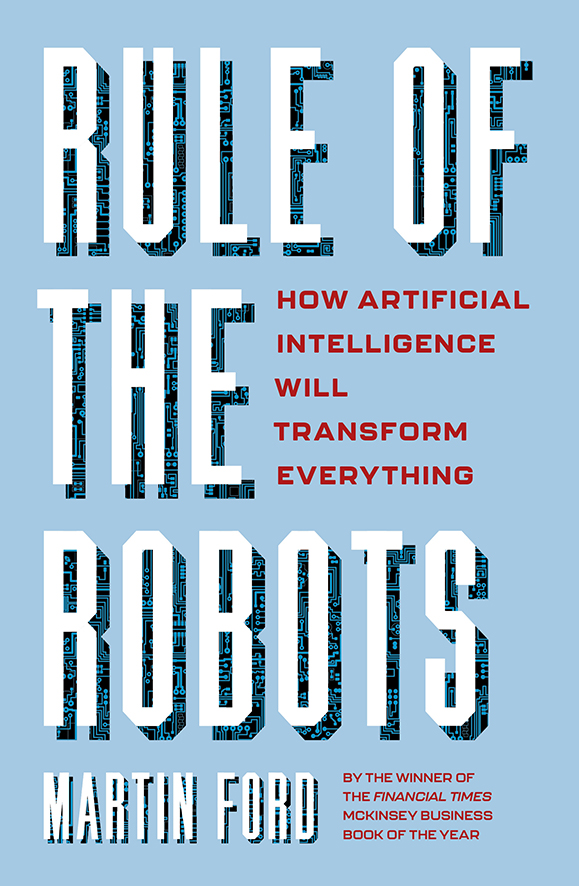 If you’re still not sure what Artificial Intelligence is or the part it plays in your life already, consider the following, says Martin Ford in his Rule of the Robots. If you have a smartphone, you already have a relationship with AI. If you are connected online, it is impossible to avoid AI. And although the subtitle of his latest is ‘how artificial intelligence will transform everything’, you can’t help feeling that his use of the future tense is somewhat unnecessary because it’s already transforming everything in the present. It’s changing the way doctors diagnose disease. It’s changing how you buy things over the internet. It changes the way in which the news is presented to you. All this and more. In fact, so much more is coming down the road that perhaps it’s no mistake that Ford uses the future tense after all.

It’s very easy to be scared of the digital future and this fear probably has its roots in the fake news, dynamic marketing and deep fakes that make us wonder where it’s all going to end. But as with all technology, from the dawn of technology itself, we can put this gift to the greater good, and as Ford is keen to point out, AI is going to be the biggest weapon in our fight against climate change or the next global pandemic. It will also allow us to quickly do things that would take humans centuries to achieve manually. A good example of this lies in molecular biology, where computers will be able to analyse the suitability of tens of thousands of molecules for producing drugs that will fight cancer, heart disease and dementia. As with Ford’s previous Rise of the Robots, his latest is essential reading.