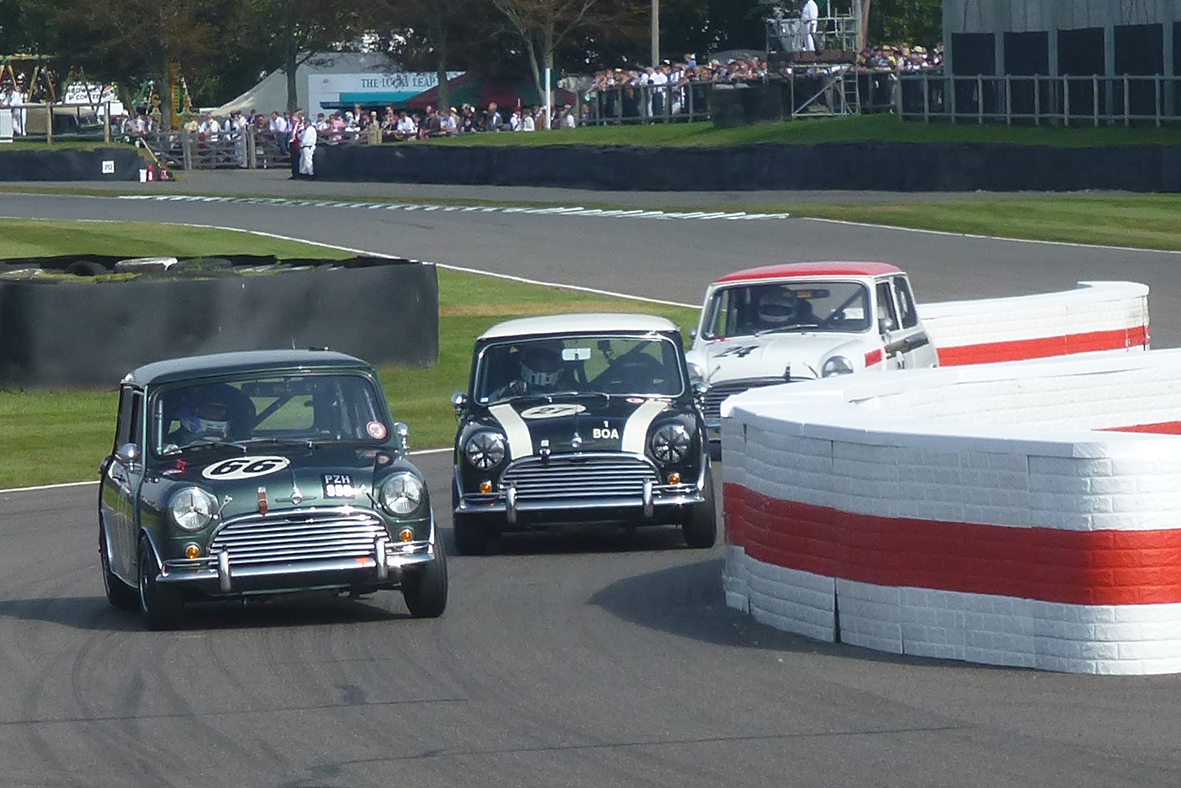 All Mini photographs by Rebecca Thomas

Mighty Minis: Goodwood Revival hosts epic Mini Cooper race with one of the most illustrious grids ever assembled

Over the weekend of Friday 17 – Sunday 19 September The Goodwood Revival assembled one of our most illustrious ever grids for the John Whitmore Trophy presented by Sure. 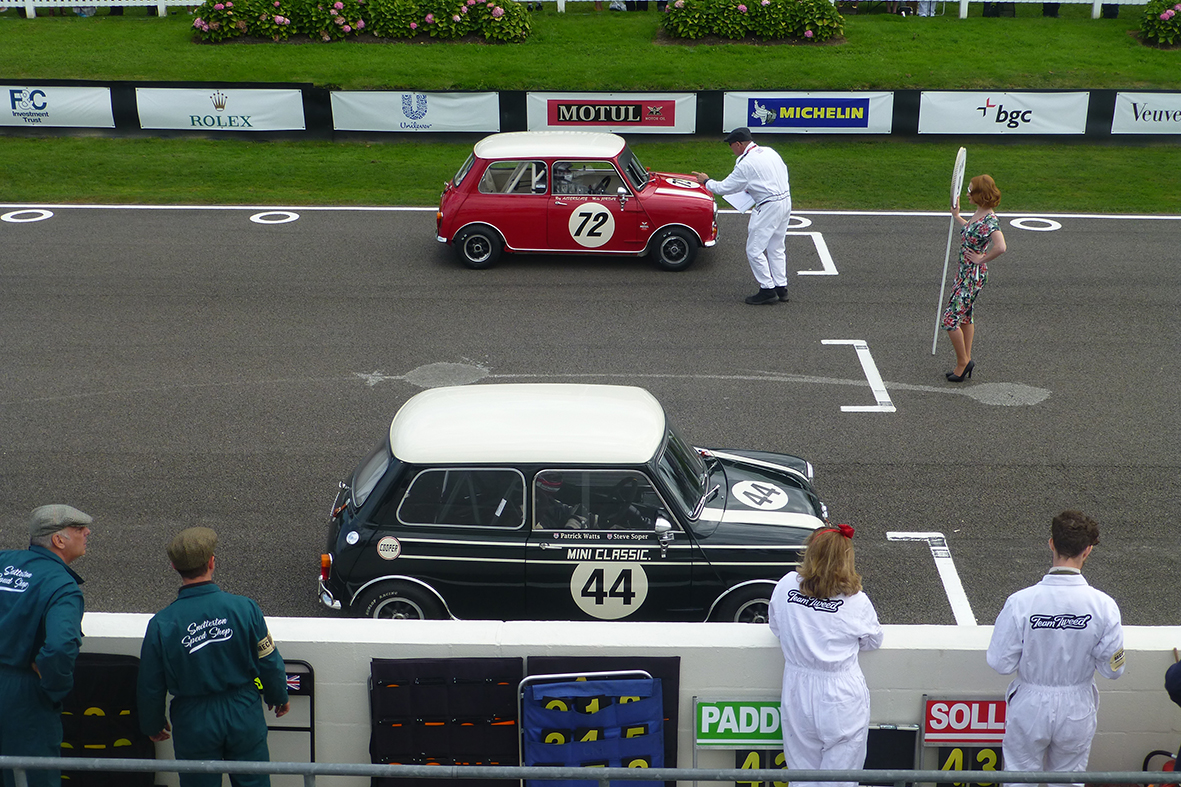 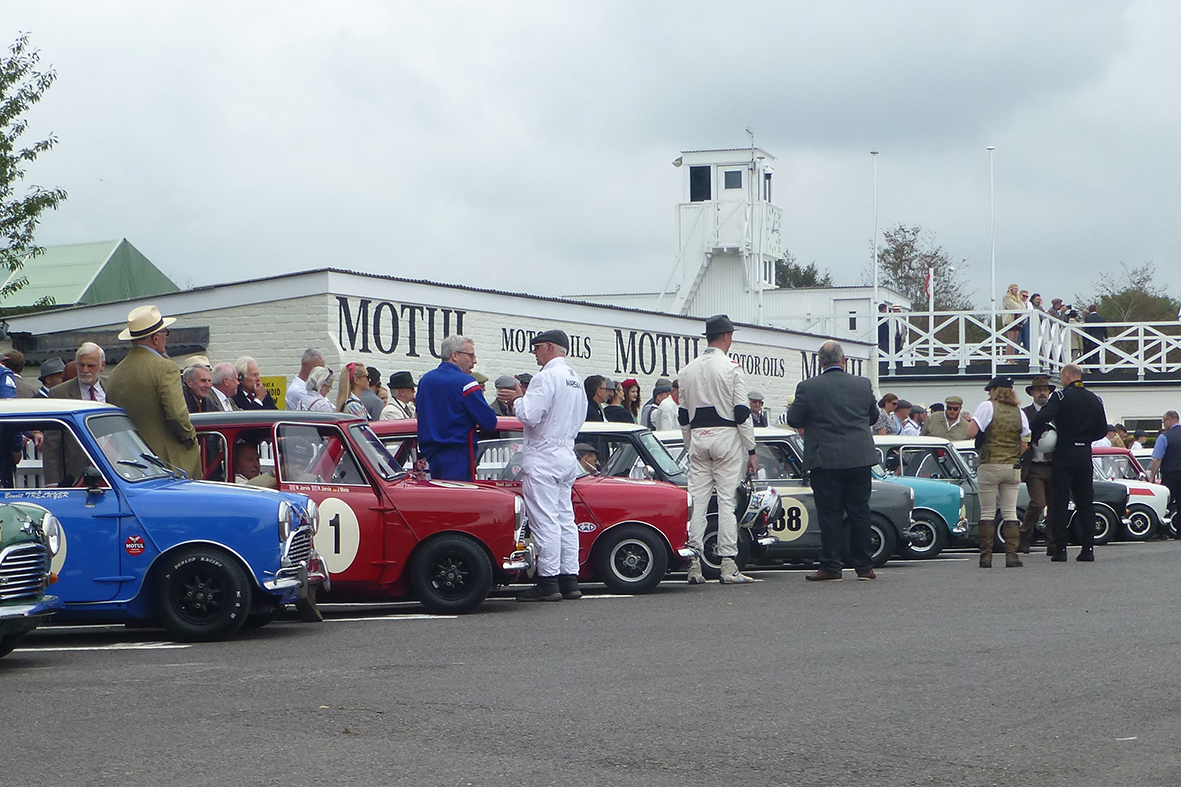 Named after Sir John Whitmore, who won the British Saloon Car Championship in a Mini in 1961, his first year in competition, the one-off race celebrated 60 years of the Mini Cooper, pitting 30 of the iconic saloons against each other in a two-driver, 45-minute race. Following the success of the all-Mini St Mary’s Trophy in 2009 and the Betty Richmond Trophy at the 77th Members’ Meeting in 2019, this was without doubt one of most closely contested and exciting races of the Revival weekend.

Sir Chris Hoy tookto the track again on the Sunday of Revival, leading hundreds of cyclists in a special inaugural ride to celebrate Eroica Britannia’s new home at Goodwood, ahead of the iconic vintage cycling festival’s return to the Goodwood Motor Circuit next year. 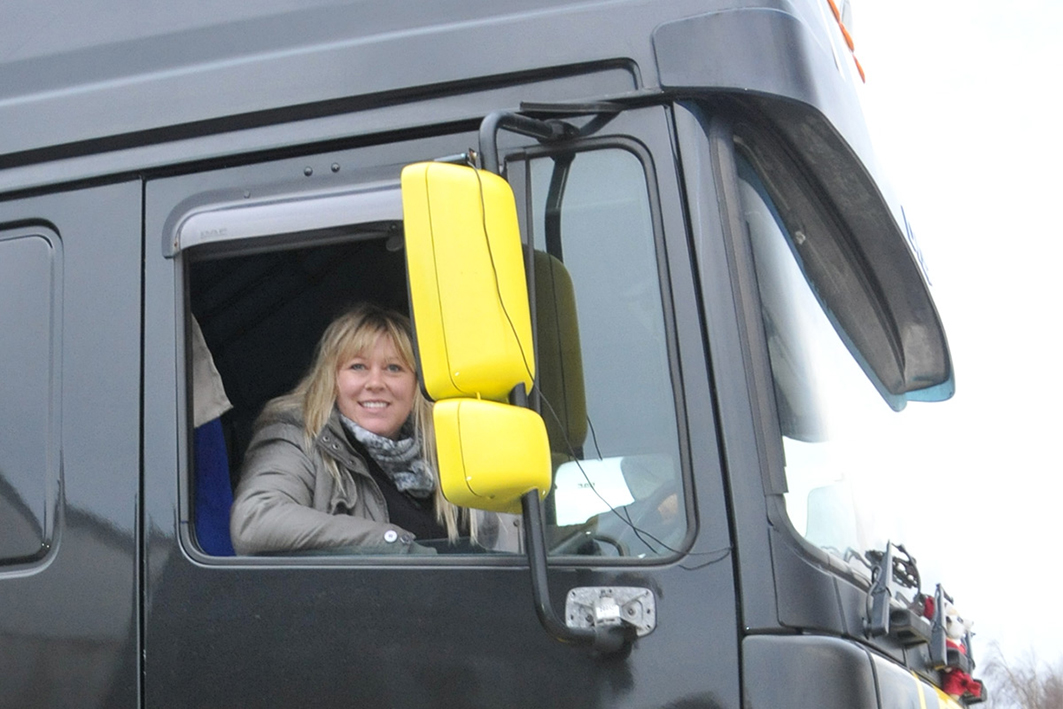 Up to 50,000 more HGV driving tests will be made available each year thanks to government action to streamline the testing process and tackle the worldwide lorry driver shortage.

HGV driving tests will be overhauled, meaning drivers will only need to take 1 test to drive both a rigid and articulated lorry, rather than having to take 2 separate tests (spaced 3 weeks apart). This will make around 20,000 more HGV driving tests available every year and mean drivers can gain their licence and enter the industry more quickly.

Tests will also be made shorter by removing the ‘reversing exercise’ element – and for vehicles with trailers, the ‘uncoupling and recoupling’ exercise – and having it tested separately by a third party. This part of the test is carried out off the road on a manoeuvring area and takes a significant amount of time. Testing such manoeuvres separately will free up examiner time, meaning they can carry out another full test every day.

Car drivers will no longer need to take another test to tow a trailer or caravan, allowing roughly 30,000 more HGV driving tests to be conducted every year.

This new legislation is changing previous EU regulations which the UK is no longer obliged to use.

From Inverness to St Ives, HGV drivers are helping to keep the country running, and have been throughout the pandemic. The shortage of drivers is a global problem, but we’ve been taking action here in the UK to help industry leaders attract drivers and build a more resilient sector.

We’ve already delivered 50% more tests than were available before the pandemic, but today’s additional measures will deliver up to 50,000 more a year, helping more and more people to kickstart their career as a well-paid HGV driver.

The changes follow a public consultation over the summer, which saw thousands of respondents, including industry leaders, support the move as a positive step to help the sector tackle the lorry driver shortage currently affecting countries around the world.

The standard of driving required to drive an HGV will not be affected, with road safety continuing to be of paramount importance. Any driver who does not demonstrate utmost competence will not be granted a licence. All car drivers will also still be encouraged to undertake training to tow trailers and caravans. 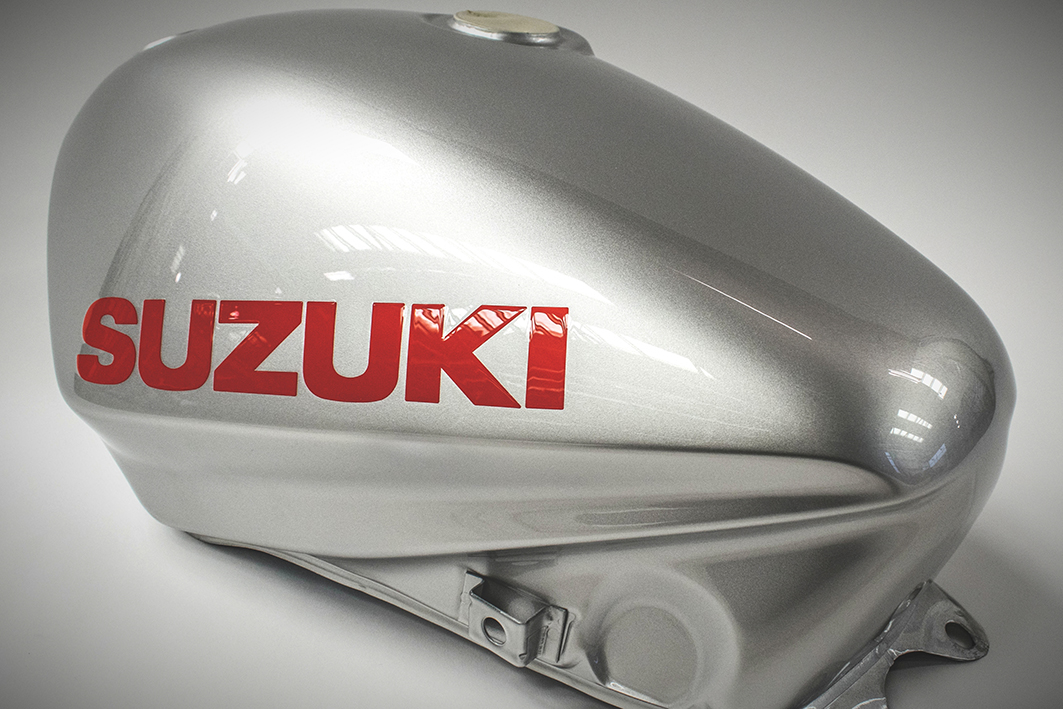 With an RRP of £746.76 including VAT, the brand new fuel tanks fit GSX1100SD and GSX1000SZ Katanas and are finished in the glorious silver and adorned with the same red Suzuki lettering.

Suzuki GB aftersales co-ordinator Tim Davies, said,“We’re really excited to have these new Katana fuel tanks in stock, in the UK, and that the factory have been able to reproduce this limited run. No one needs me to point out how iconic the Katana is and how they’re still so sought after, and we see so many restorations or custom builds based on the bike. Of course, over time, bikes left to stand can suffer from all sorts of problems with stale fuel or water and moisture in the tank, so being able to replace it completely for a brand new, genuine item is a great thing to be able to do for a bike that is 40-years-old.”

Designed by Hans A. Muth and Target Design, the Katana was like nothing before it. It was a radical departure from current motorcycling fashion and was a sales success for Suzuki.

Other parts still available for the Katana include centre stands, brake and clutch levers, clock surrounds, sprocket covers, con-rods, pistons, and piston rings, an array of gaskets, valves, cotters, seals, and springs, and even the carburettor intakes pipe rubbers.

The new fuel tanks and other parts on the Vintage Parts Programme can be ordered through authorised Suzuki dealers. 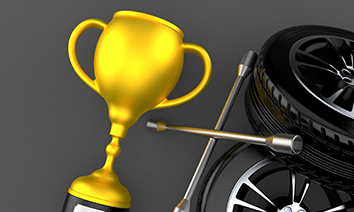 The Motor Ombudsman, the Ombudsman dedicated to the automotive sector, is pleased to announce the launch of its 2021 Garage Star Awards. It follows the success of the inaugural recognition programme last year, which saw over 800 online customer nominations for Motor Ombudsman-accredited garages and dealerships across the UK, and Cornwall-based Dukes AutoTech crowned the first national winner.

Consumers can put forward an individual or accredited business via the nomination form on The Motor Ombudsman website (TheMotorOmbudsman.org/Awards) to win one of the eight regional trophies on offer. As part of this, customers will be asked to write a short account of how a person or organisation, such as an independent garage or car dealership, went the extra mile to assist them on one or more occasion during the past 12 months, and why they think their chosen nominee should be considered for a prize.

The four-strong judging panel, which counts two new members for the 2021 contest, will have the task of jointly selecting a total of 11 winners in this year’s competition from a shortlist of three entries per award compiled by The Motor Ombudsman according to pre-defined criteria. For the Garage Star Award categories, the panel will select eight regional winners and the highly commended honours in each of these geographical areas. The national Garage Star Award trophy recipient, which can be a business or individual, will then be chosen from this pool of eight regional winners, and they will also receive a £500 voucher in recognition of their achievement.

Similarly, judges will pick the very first Customer Service Star Award winners and highly commended entries for the vehicle manufacturer and warranty provider categories from a shortlist of three nominations compiled by The Motor Ombudsman for each of these awards.

Customer nominations can be submitted until 15 October 2021, and the winners of the 2021 Garage Star Awards will be announced in November. 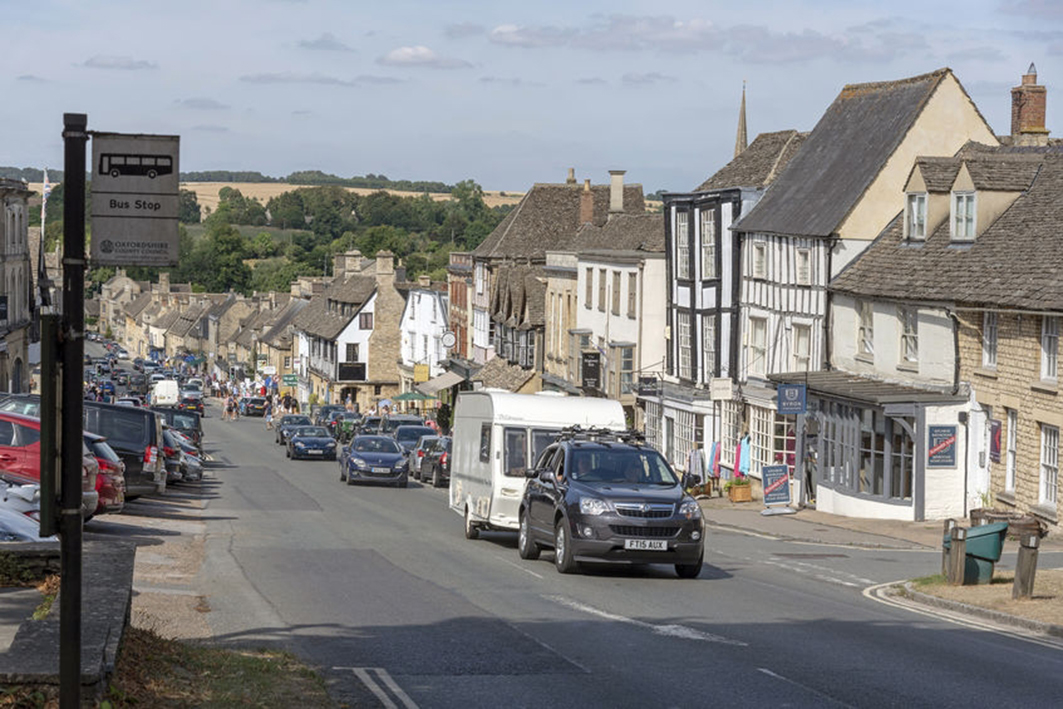 ROAD SAFETY and breakdown organisation GEM Motoring Assist is urging drivers to put safety first when towing. The advice follows a change to the rules which means it will soon* no longer be a requirement for drivers who passed their test after 1 January 1997 to take an additional test to have the ‘B+E’ categories added to their licence.

All drivers with full licences will be entitled to tow trailers until their licence expires. However, the combination of vehicle and trailer must not excced a ‘maximum authorised mass’ (‘MAM’) of 8.25 tonnes.

GEM chief executive Neil Worth urged drivers, whatever their experience level, to put  safety first on every towing journey.

“Doing away with the test raises safety concerns, but we take the view that individual responsibility must be even more of a priority for every driver who’s towing. We all need to ensure we know what we’re doing before setting off with a trailer,” he said.

“For example, what if we are on a narrow lane and we have to reverse? What if we encounter strong crosswinds? What if the trailer becomes unstable and starts snaking behind us?

“Additionally, as many owners of trailers and caravans use them infrequently, it’s important to ensure the trailer is in a fit state for the road, as well as checking load distribution, lights, tyres, brakes and couplings.”

Top towing tips
GEM has complied a list of six basic tips relevant for anyone planning to tow a trailer, horse box or caravan.

Check your insurance: Most policies do cover you for third party when towing. However, assume nothing. It is your responsibility to make sure that you have the appropriate cover.

Check your breakdown cover: Most recovery companies won’t cover a trailer unless it is specified in your contract. GEM Motoring Assist’s award-winning breakdown recovery service does cover trailers and caravans.

Don’t rush: Moving off needs more effort, slowing down and stopping takes a lot longer and bends need to be approached slowly and carefully.  Many trailers, caravans and horseboxes, for example, are wider and taller than the towing vehicle, so take extra care with road positioning, especially when pulling over alongside kerbs, entering toll booths or refueling at petrol stations.

Anticipate: Know what the road is doing, and know what everyone else on the road is doing as well. If you see a car far ahead put its brakes on, start to slow down yourself, don’t wait for the car directly in front to brake. With a loaded trailer you will not stop as quickly as you are used to, so leave plenty of space.

Know the rules: Be aware of the lower speed restrictions for trailers, and remember that when towing, you are not permitted in the right-hand lane of a motorway with three lanes or more.

Reverse with confidence: The first and foremost rule is slow and steady, as the faster you do it, the faster you can get into trouble. Find a big empty field or car park so you can quietly practice and make your own mistakes. To steer the trailer, remember that you need to move the wheel in the opposite direction to that if you were reversing the car with no trailer. This can be tricky but practice makes perfect – the more you do it the more natural it becomes.

*An exact date has not yet been announced. 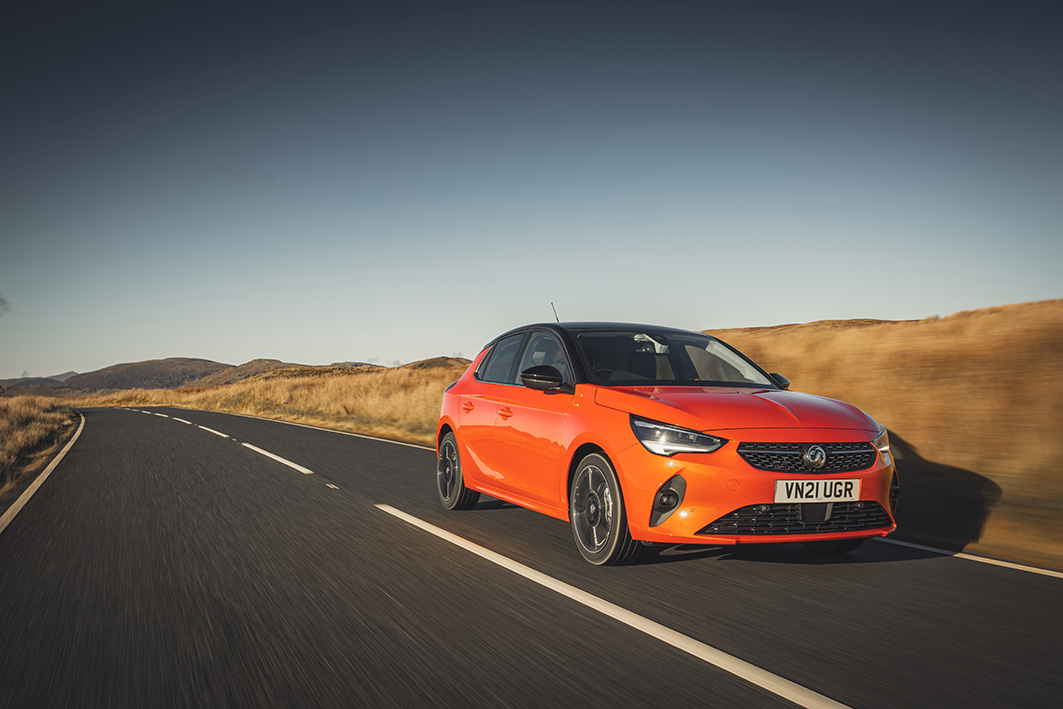 The New Vauxhall Corsa is the UK’s best-selling new car so far this year, according to the latest new car sales and registration figures released recently by the Society of Motor Manufacturers and Traders (SMMT).

27,381 Corsas have been registered in the first eight months of 2021. Vauxhall’s all-electric Corsa-e was also the best-selling all-electric model in its segment in August, as the brand continues its electric vehicle expansion with the goal of offering an electrified variant across its entire model line-up by 2024.  Vauxhall will offer only fully electric cars and vans in the UK by 2028.

The Corsa-e has been the best-selling new electric car in the small Battery Electric Vehicle (BEV) sector so far this year. The success of the Corsa and Corsa-e has helped Vauxhall increase its share of the private car market in August by 0.4%, growing from 4.1% in August 2020 to 4.5% in August this year.

Paul Willcox, Managing Director, Vauxhall, said: “As a British brand, it’s fantastic to see the Corsa remain the UK’s best-selling new car. With electric sales continuing to grow at a rapid pace, we’re proud to see the new Corsa-e also retain its spot at the top of the sales charts, bringing an affordable all-electric option to our customers.”

The all-new fifth generation Corsa is available with a fully-electric powertrain alongside a choice of powerful and efficient petrol or diesel engines. The zero-emissions-in-use Corsa-e was voted The Sun Car of the Year, thanks to its 209-mile WLTP range, affordable price and fun driving dynamics.