Finding a restaurant that has a menu and the ambiance to suit all tastes is difficult at the best of times but throw a 6-year old boy into the mix and it can be quite a headache. This was my dilemma last month. It was our daughter’s birthday – I’ll not say how old she is, or she’ll be cross with me, she looks a lot younger than her birth certificate proves – and we wanted to go out for dinner en famille. Birthday girl fancied somewhere that she could have a good steak, I prefer fish and little one wanted pizza – so Castellamare fitted the bill.

I rang to reserve a table and was told that although we were booking for the restaurant, the café menu was being served so there would be a limited menu. It looked as if it was going to be pizzas all round.

We arrived a little early for our table but were shown straight through to one of the best window tables in the restaurant with fabulous views over to the lighthouse. And before you think we were given preferential treatment, I can assure you that they had no idea we were from bay magazine or that we were going to do a review. I know I keep saying it, but I do still get people assuming that we dine out at the expense of the rest-aurant which is totally incorrect. We pay for all our food and drinks so that our views are unbiased. 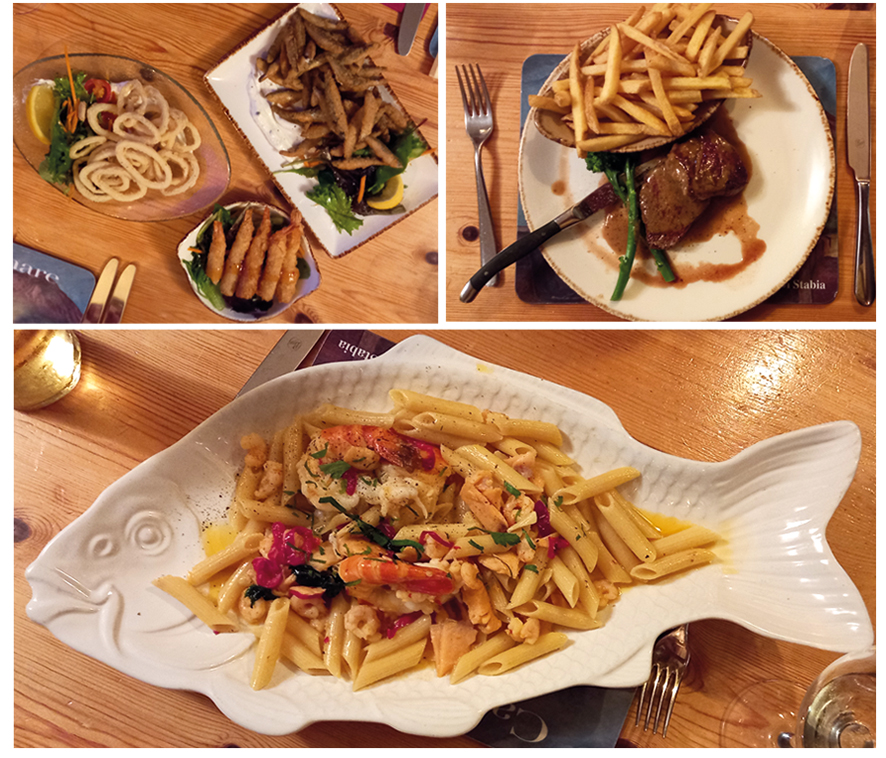 It was a great surprise when a specials board was presented to us – it included steak and seafood. Birthday girl was very happy with medallions of fillet steak in a cream and brandy sauce served with chips, she certainly is her father’s daughter as he had the same. I wasn’t disappointed either as there was a special of a seafood penne with king prawns, salmon and tomato served on a spectacular fish platter. The café menu was also available so a pizza Margherita with lashings of Parmesan cheese kept the youngest member of the family quiet for at least 15 minutes.

A range of seafood from the café snacks menu made excellent starters, whitebait, calamari and tempura battered prawns, along with a very good Italian white wine completed the meal.

As the sun went down we celebrated the pass-ing of another year. Castellamare is the quint-essential Italian ristorante, it’s family friendly, the food is great, the staff being typically Italian are fabulous with children – and adults, and it’s got one of the best views of any Swansea restaurant.

This year the Royal British Legion is celebrating its centenary. The first Poppy Appeal was held in 1921 and raised £106,000 from the sale of the paper poppies – a huge amount of money at the time, which was used to help WW1 veterans with employment and housing.

Today the Royal British Legion continues to support ex-servicemen and women in many ways. 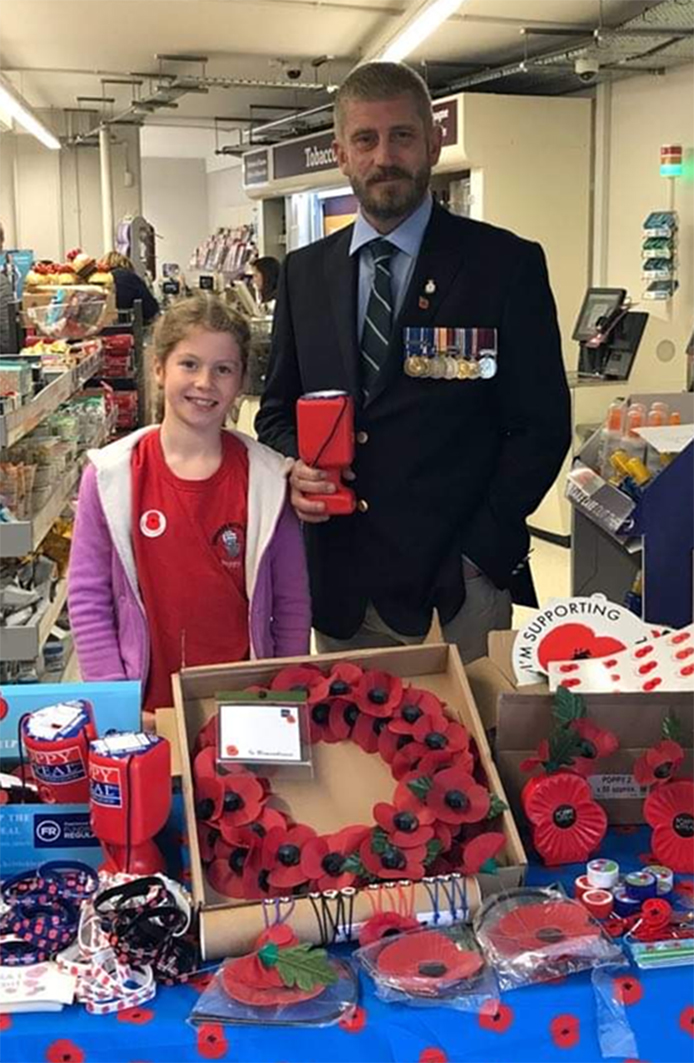 To celebrate this milestone, a cookery book has been published with £5 from the sale of every copy going to the legion. I have a very personal reason for wanting to tell you about it, as my nephew who has now retired from the army, is a contributor to the book. Guy was in the Royal Corps of Signals and was involved in action in Afghanistan; when he told me about Cooking with Heroes I want-ed to get involved. He’s pictured here (right) with his youngest daughter Poppy.

The book contains recipes from some of the world’s best-selling celebrity chefs, including Jamie Oliver, Ainsley Harriott, Cyrus Todiwala, Melissa Helmsley and the Hairy Bikers, who have teamed up with serving and ex-serving members of the military to create this unique cookbook.

It’s a high-quality hardback book with contributions from members of the Armed Forces and their high-profile supporters, it focuses on 100 regions in which the Royal British Legion has been active over the past century, including the British Isles and the Commonwealth. There are profiles of 100 military heroes and heroines, each nominated by the Royal British Legion.

Cover to Cover in Mumbles have it in stock, priced at £19.99 with £5 of every sale going directly to the Royal British Legion.

I am delighted to be able to publish a recipe from the book, here in Bay. 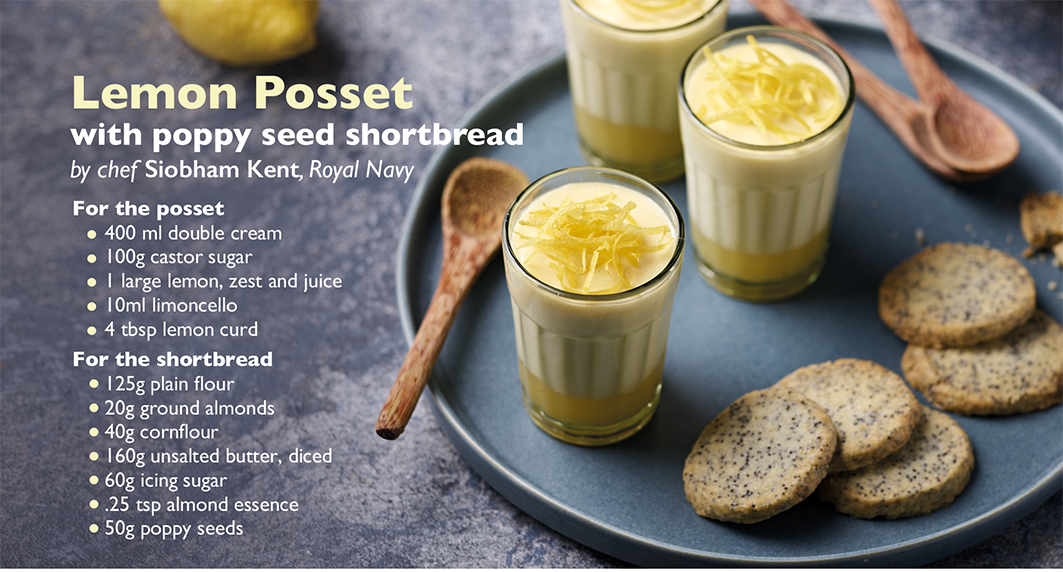 Method. In a saucepan bring the cream and sugar to the boil, simmer for 4 minutes then leave to cool. Whisk the lemon zest, lemon juice and limoncello into the cream mixture until well incorporated. Spoon a tablespoon of lemon curd into each of four ramekins, level out and then top with the posset. Refrigerate for 6 hours or overnight. To make the shortbread, preheat the oven to 180c and line a tray with baking parchment. Cream the butter and sugar together until light and fluffy and mix in the almond essence and poppy seeds. Fold in the flour, ground almonds and cornflour and mix to a stiff dough, then refrigerate for 15 minutes. Roll out the dough on a floured surface to about 5mm thickness and cut into biscuits with a 5 cm cutter. Place on the prepared tray leaving a 2cm gap between each biscuit then place in the fridge for 15 minutes. Bake for 10 – 12 minutes or until lightly browned. Cool on a wire rack.