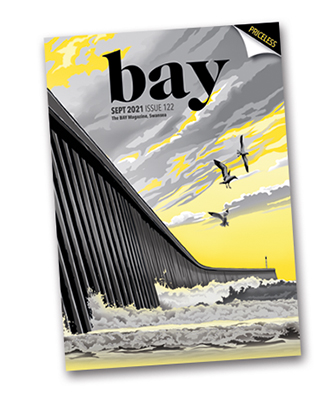 Simon’s artwork (left) on the front cover of last month’s September edition of bay, inspired me to look at the history of the WEST PIER. 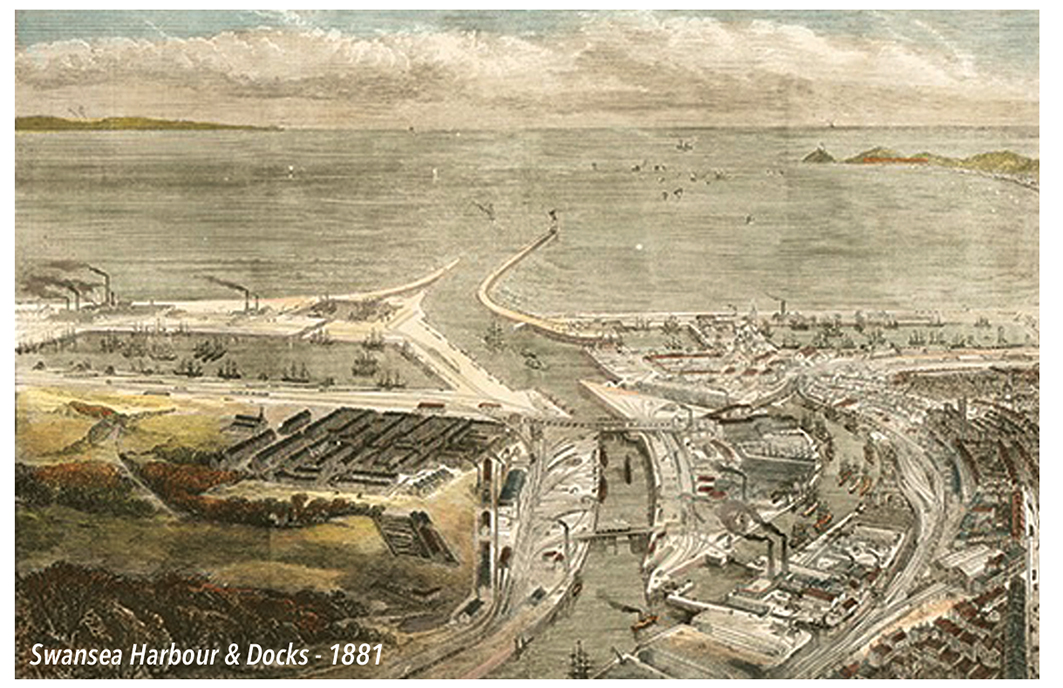 Currently, there are works being undertaken to repair damage caused by Storm Dennis from 11th to 18th of February 2020.

It is thought that the Mumbles Lighthouse was the first to aid and assist ships around the dangerous waters off Mumbles Head, when it was completed in 1794. However, the first harbour lights known as the ‘Lanthorn Beacon’ was erected on posts at the mouth of the River Tawe during 1792. These posts were to mark the proposed new pier.

After completing the Mumbles Lighthouse, Swansea architect William Jernegan, designed a lighthouse in 1803, on the head of the finished West Pier. This lighthouse was 20-foot high; an octagonal tower, standing on a stone plinth. By 1810, the lantern, having been lit by candle was situated in a smaller octagonal lantern, crowned with a domed top. The candle was replaced with oil by 1845. The elevation above high-water was 28ft, sharing the same characteristics as the other harbour lights. 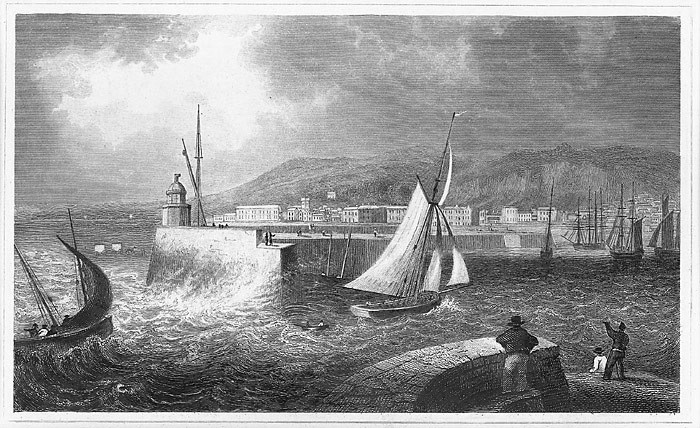 By 1878 the old lighthouse structure had been moved to the end of the wooden pier, constructed by Scottish civil engineer, James Abernethy. Abernethy’s projects included the Swansea docks, he was also acting as consultant to the Swansea Harbour Trust from 1847 and became their Engineer-in-Chief in1849, but he was still residing in Aberdeen. He moved to Birkenhead in 1851, and still held the same

position. In 1853, Abernethy set up an office in London, where he oversaw a number of docks, including Cardiff, Fraserburgh, Newport and Swansea.

In 1909, the pier was once more extended; the works were undertaken by English engineer, Patrick Walter Meik. The new West Pier also included a new lighthouse, which was made of both iron and wood, and had an octagonal iron lantern. At the time of Meik’s death the following year, his most successful work was the opening of the new King’s Dock, in November 1909. It cost £2 million (which would be £166 million today). This pier was replaced in 1971, and it is this one that was damaged last year. 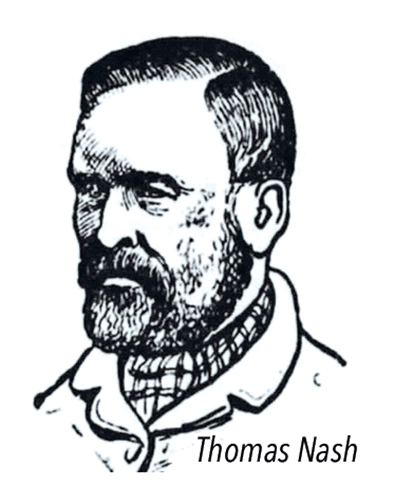 The West Pier does have a sinister past. Swansea Corporation labourer Thomas Nash was a widower with two daughters; 17 year old Sarah and 6 year old Martha Ann.  Nash embarked on a new relationship but failed to tell his second wife that he had two children. He placed the girls in rooms, but failed to pay their rent so the landlady, Mrs Goodwin went with Martha Ann to Nash’s place of work and he paid his debt.

The evening of 5 December 1865 was a wild night, and Nash was seen walk-ing down the pier hand in hand with Martha Ann. Minutes later, Nash was seen returning alone. Nash was arrested and failed to say what happened to Martha – her body was discovered later that evening washed up on the beach.

Nash was tried at Cardiff assizes, where he was found guilty of murder. Petitions were placed to reduce his sentence to that of penal servitude for life, as no one had actually witnessed Nash throwing his daughter into the sea.  Home Secretary, George Grey stated that the execution would still take place and Nash was hung on 1 March 1866 at Swansea Prison. 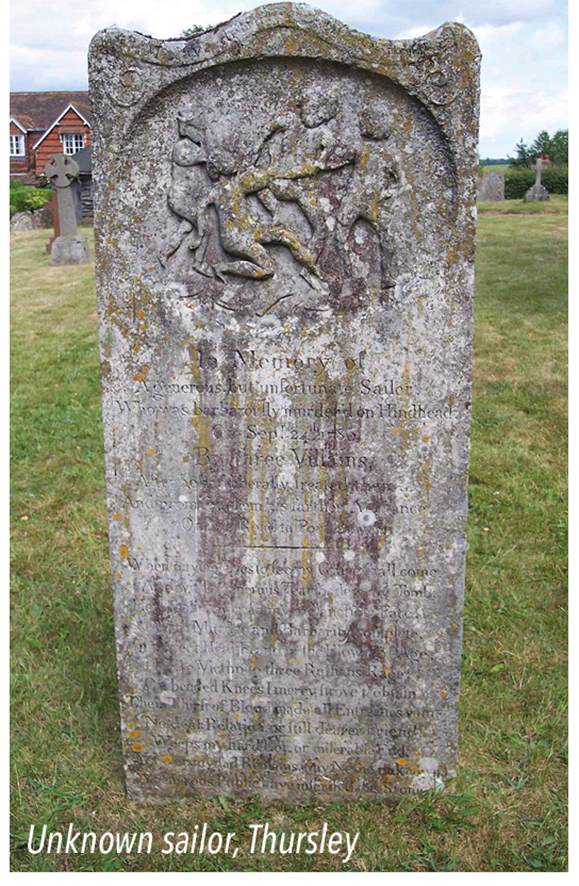 Wilful Murder against a Person or Persons Unknown, these were the returned verdicts of two inquests regarding two murders. Inquests unlike today, where they are heard at a Coronor’s Office, were heard at the local Public House, close to the murder.

What is a Murder Stone? They are an historic marker usually a stone, which has an engraved inscription. They are to be found in England, Scotland and a handful in Wales.

Since the publication of last April’s bay Family History article, Sweet F.A., which featured a murder stone located at St Catwg’s church, in Cadoxton, Neath, I have visited St Michaels and All Angels church, in Thursley, Surrey where there is a Grade I listed murder stone, which commemorates the murder of an unknown sailor.

In September 1786, an anonymous sailor who was returning from London to join his ship docked in Portsmouth, had stopped off at the Red Lion pub in Thursley.  It was here that he bought a round of drinks for three other men. The sailor, now accompanied by the men, set off for Portsmouth. The men, thinking that the sailor was well off, murdered him and stripped him. The three men then went into the next village, Rake and tried to sell the clothes. They were caught, tried and found guilty of murder, then executed at a local gibbet.

So infamous was the murder that Charles Dickens features the events in the novel Life and Adventures of Nicholas Nickleby, in 1839. 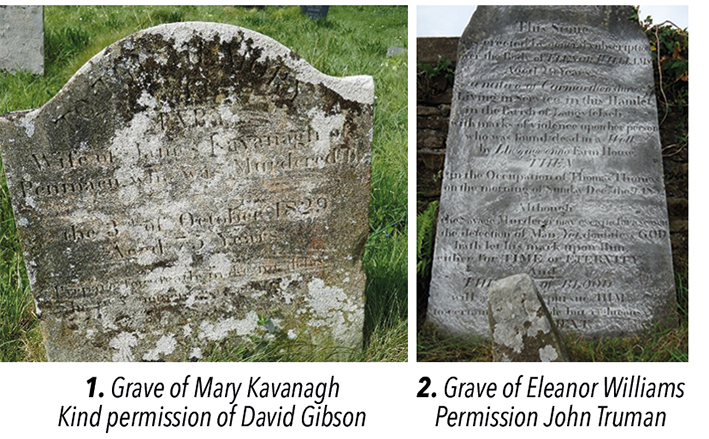 We will now look at two murder stones that are located in Swansea.

St Andrew’s church, Penrice, Gower; the chancel and nave are thought to date from the 12th century with additional parts built around the 15th/16th centuries. The church we see today, is the result of a generous donation made by Miss Emily Talbot of Penrice Castle, to have the church restored during 1893/94. 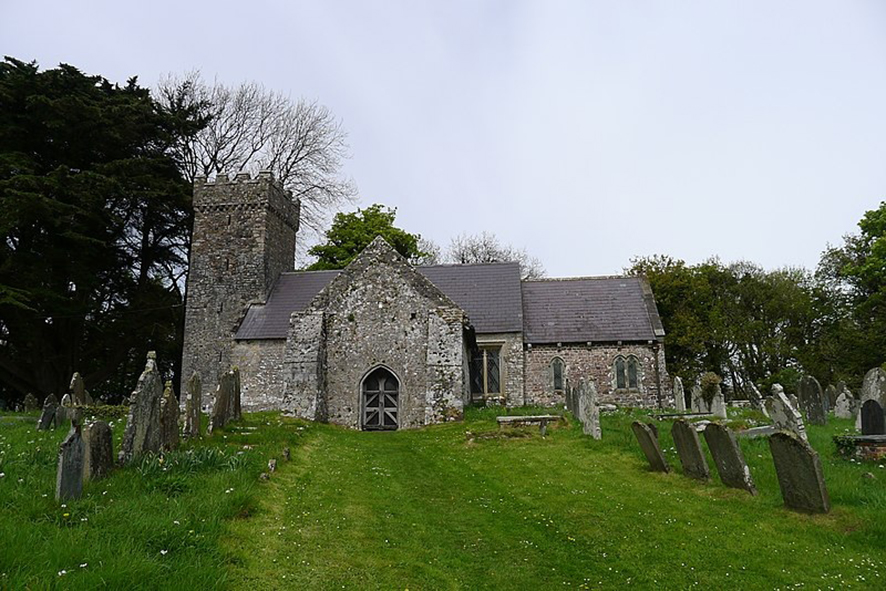 The murder stone commemorates the murder of Mary Kavanagh. The inscription reads:

To The Memory of Mary

Wife Of James Kavanagh of Penmaen

Who Was Murdered on

The Cambrian reported in a lengthy article published on 10th October 1829 that widow Mary Kavanagh, was last seen alive at 5pm on Saturday 3rd October. The following day, the curtains remained drawn, they remained the same on the Monday. On Tuesday 6th, Mary was found in the garden brutally murdered. The house had been ransacked and all that was taken was 2 watches, hanging from the mantelpiece. Her life savings of £120 (£9,210 today) had not been taken as it was locked in an oak chest. 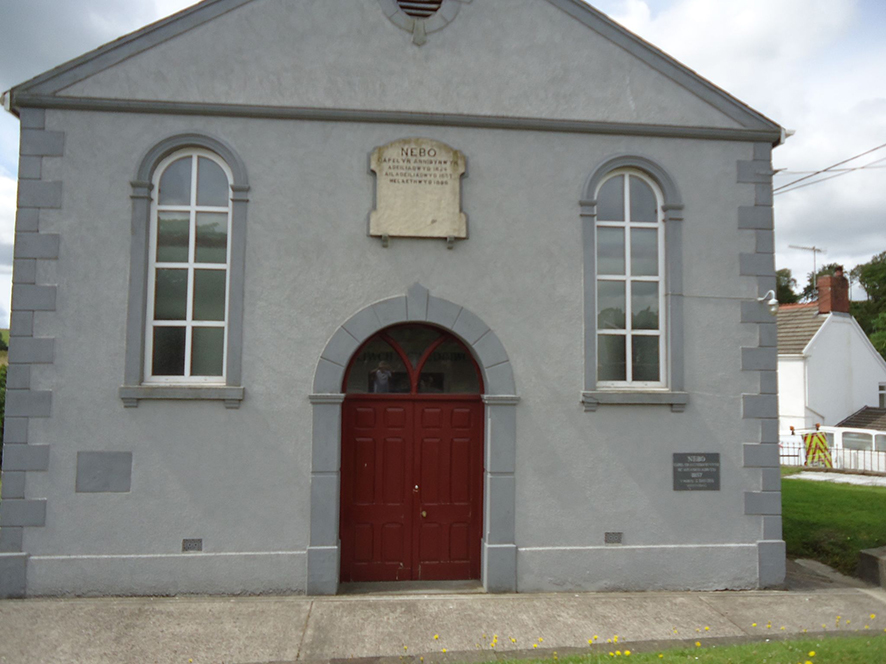 To Record a Murder

“Vengeance Is Mine I Will Repay Says the Lord”

The Cambrian reported on 19th December 1832, “On the 9th inst., the corpse of a young woman named Eleanor Williams was discovered in a well of a farmyard in the parish of Llangyfelach with her skull fractured and other marks of violence and the jury at the inquest held before Charles Collins Esq., Coroner after a patient investigation returned a verdict Wilful murder against some person or persons unknown.”

Unfortunately, many of these stones, which record important social history, are being lost due to the weathering of the inscriptions.