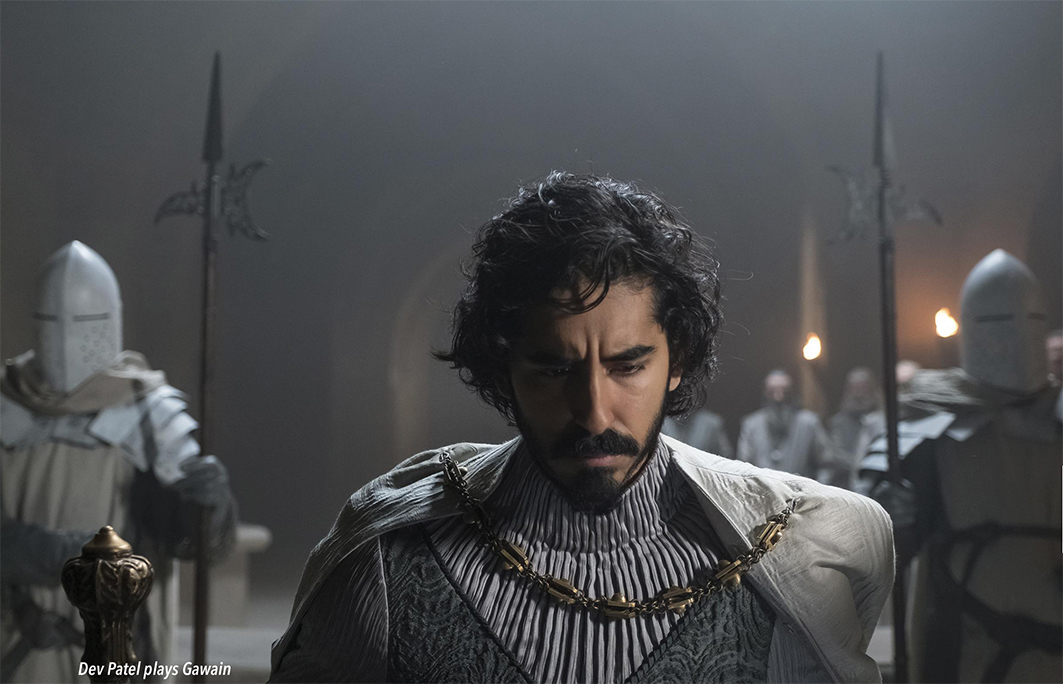 It is strikingly, and depressingly, rare for a good movie based on Arthurian legend to come along. The best of the bunch is probably still Excalibur, which is 40 years old; the rest range from the enjoyable enough but very uneven The Sword in the Stone to absolute drivel like King Arthur: Legend of the Sword, about which the less said the better. So, we should be enormously grateful to The Green Knight, which immediately leaps into the highest echelons of these films and which is – at long last – getting a proper release into cinemas, where it belongs and where it deserves to be seen.

The tale begins at Christmas, where a young Gawain – here rather like the Prince Hal of Shakespeare’s Henry IV plays – awakens in a brothel after a night of drinking and carousing before heading off to the celebrations at the King’s court. And at those celebrations, a mysterious stranger appears and proposes a game: let one of the knights try to strike him, and in a year’s time he will return the blow. Young, brash Gawain promptly decapitates the Knight, who simply picks up his head and promises to see him in a year. 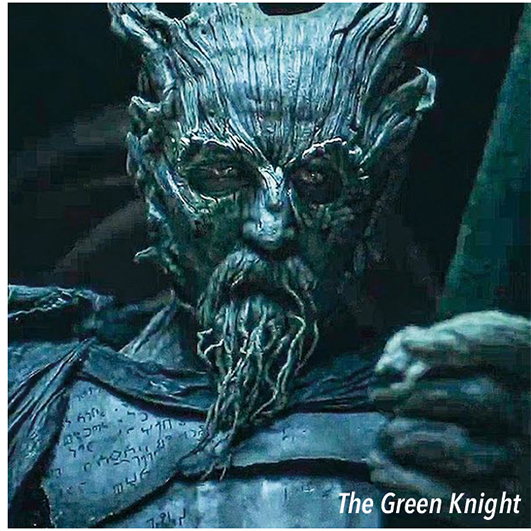 The Green Knight himself is an extraordinary creation, imagined as a forest god with bark for skin, a deep rumbling voice and thunderously loud footsteps, whose every movement is accompanied by the creak of trees and the rustle of leaves.

He looks great, but it’s how he sounds that leaves the biggest impression. He’s a distinctly pagan figure crashing the firmly Christian court of King Arthur, on Christmas Day no less, bringing the religious aspect of the story immediately and unmistakably into focus. The conflict between pagan magic and Christian faith runs through the film, right up to the astonishing, disorienting ending which more than anything else seems to be channelling The Last Temptation of Christ. It’s heady stuff and offers a lot to get your teeth into.

Gawain’s quest to meet the Knight again takes him through all sorts of strange adventures, which are never really explained and allowed to remain weird and dreamlike, out of step with reality but with the ring of truth to them all the same. Too few fantasy movies are willing to just indulge in the fantastic like this; just about the only good bit in Legend of the Sword was when Arthur met the Lady of the Lake, a scene which shared the ethereal, mystical quality that’s on display all throughout The Green Knight. Myths and legends are almost invariably deeply strange and shying away from that rarely helps. Director David Lowery is never afraid to get weird here, and it does wonders.

Grounding all this is Dev Patel as Gawain, playing up his character’s youthful swagger and determination to make a name for himself, tempered with a terrible fear of what awaits at the end of his journey. It’s a terrific performance which sees him alone on screen for a good chunk of the runtime, carrying the film on his shoulders, and contrasts beautifully with Sean Harris as the King (unnamed in the film, but clearly Arthur). This King is old and infirm – and, rather wonderfully, Cornish-accented – looking to Gawain as part of the next generation of knights as he rules a kingdom seemingly in decline for all its beauty, with large tracts of forest cut down and Lancelot conspicuously absent, perhaps in search of the Holy Grail. This is all quite subtly played, but it gives Gawain’s search for honour and desire to be a true knight that much more weight as a result.

Fantasy movies in this vein don’t come around often enough, and when they do they’re almost never as good as this. Even if it were nothing else, The Green Knight is so spellbindingly beautiful to look at and listen to that you could almost view it as experiential cinema, just staring at it and luxuriating in all this gorgeousness. But it’s so much more than that, a captivating character study of a young man in turmoil and a great adaptation of the legend. Go on a quest of your own and seek it out.