Hanson At The Chelsea

Down a quiet alleyway off Wind Street is one of Swansea’s leading restaurants, Hanson At The Chelsea. Chef patron Andrew Hanson is renowned for being one of Swansea’s great chefs and has been recognised by the AA with a 1AA Rosette, along with being recommended by both the Good Food and Michelin Guides. He’s also known for his fish dishes; Hanson’s is my go-to place when I have a desire for seafood.

The restaurant can be described as intimate, in fact it’s cosy – the décor is understated and warm. We were welcomed by the front of house staff in a warm and friendly manner, without being over familiar – they are consummately professional.

We had made a last-minute booking; we’d had a busy day in the studio and cooking dinner and standing over a stove was the last thing I wanted to do. I just had time to get myself dressed for the occasion, because eating at Hanson’s is a special event – this is fine dining. 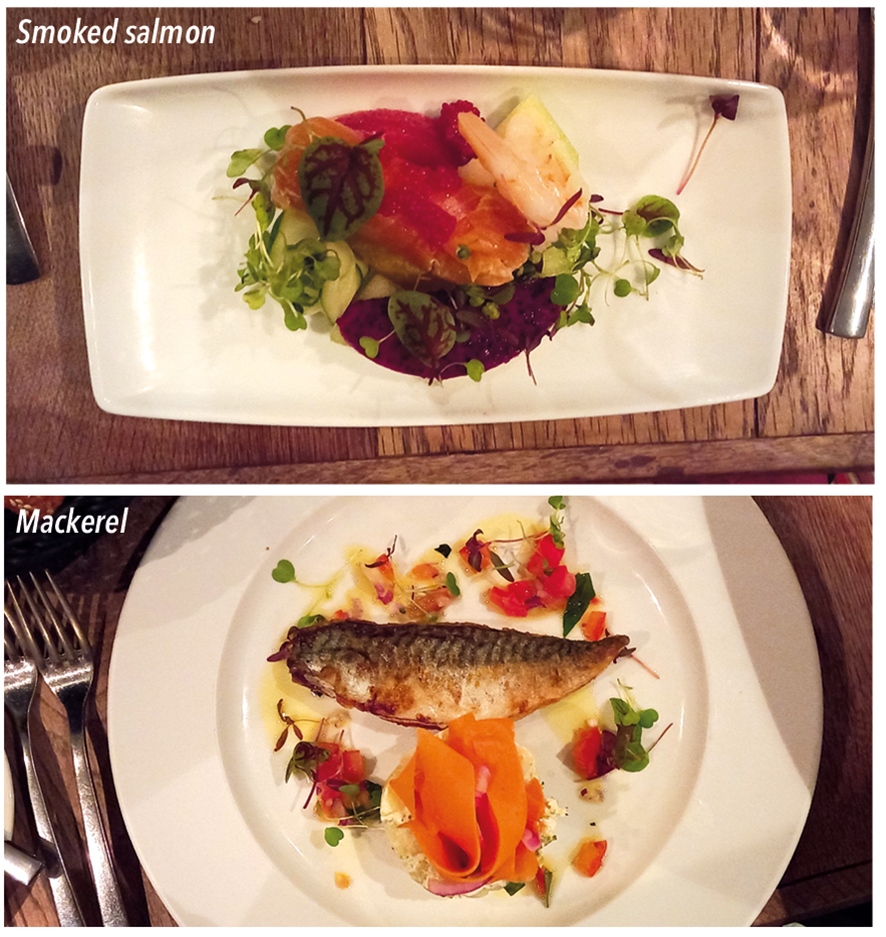 There is a taster menu consisting of 7 courses at the amazing price of £40, but I had my eye on the Swansea smoked salmon with a prawn, crab and cucumber roulade. This is our locally smoked salmon from Swansea Fish in the marina. It’s a very fine smoked salmon, far superior to any that you’ll find in the supermarket and has a mild smoky flavour without any harshness. The roulade was rich and creamy and proved to be the perfect foil for the fish.

Of all the fish in the sea, mackerel is Simon’s favourite. In the summer, his perfect meal is freshly caught mackerel cooked over charcoal on the beach. I also make a smoked mackerel pate that he never tires of, no matter how many times I present it as a starter. Mackerel used to be a really cheap fish to buy, but like all fish it has risen in price over the years. I don’t think we can ever complain about the cost of fish when you consider the danger the fishermen put themselves in, to bring us the catch of the day.

So, when he spotted the Cornish mackerel with potato salad as a starter, there was no doubt this was going to be his choice. The flesh was perfectly cooked and the skin was crisp, his only complaint was that he could have eaten it several times over.

I was intrigued by the Rendezvous of Seafood. Had they all agreed to meet at a predetermined time? Well if they had, I was certainly glad that they did and that the venue was my plate. This was a generous portion of hake, scallop, monkfish, salmon and king prawn served with new potatoes. Hake has to be one of my favourite fish. It’s from the same family as cod and haddock, so it’s a lovely white flaky fish, with a sweet flesh. Monkfish is a weird fish; it is probably one of the ugliest and only really came to notice after the late great Keith Floyd cooked it in his series ‘Floyd on Fish’ in the mid 80s. Up until then it had been used by some cunning chefs to make ‘scampi’, or to bulk out fish pies and the like. It was fed to cats. Now of course it’s a premium fish and rightly so; you only buy the tail which has a central bone which is easily removed, and makes it the perfect choice for those that fear bones in fish. Scallops are another premium product – the best ones are hand dived and not dredged, so again there is the danger element in harvesting them from the sea.

This whole dish was a perfect coming together or to put it another way, a rendezvous. Each piece of fish was perfectly cooked and along with the new potatoes and vegetables was a complete feast.

Mr Carnivore was very happy with his rib-eye steak; the proper chips were put well out of my reach, but I was allowed an onion ring. The batter had that sought-after snap as I bit into it – and the onion retained its slight bite. I don’t have a deep fat fryer at home, I think it might be dangerous not in that it would be a fire hazard but more to my health and wellbeing. It also means that going out and ordering chips or other deep-fried goodies becomes a real treat. Simon also had another item on his plate that caught my attention – a roast rarebit glazed mushroom. Who would have thought of that pairing – well I guess that’s why Andrew has won all these awards.

He trained at the Ritz Hotel in London’s Mayfair but luckily for us his head wasn’t turned by the bright lights of the metropolis, and he came home.

Whether you are looking for a dinner à deux or a family get-together, Hanson At The Chelsea is a good choice, but booking is essential.