An outstanding Welsh motorcycle racer AND a successful car dealer group have been presented with Welsh Motoring Writers’ top awards. 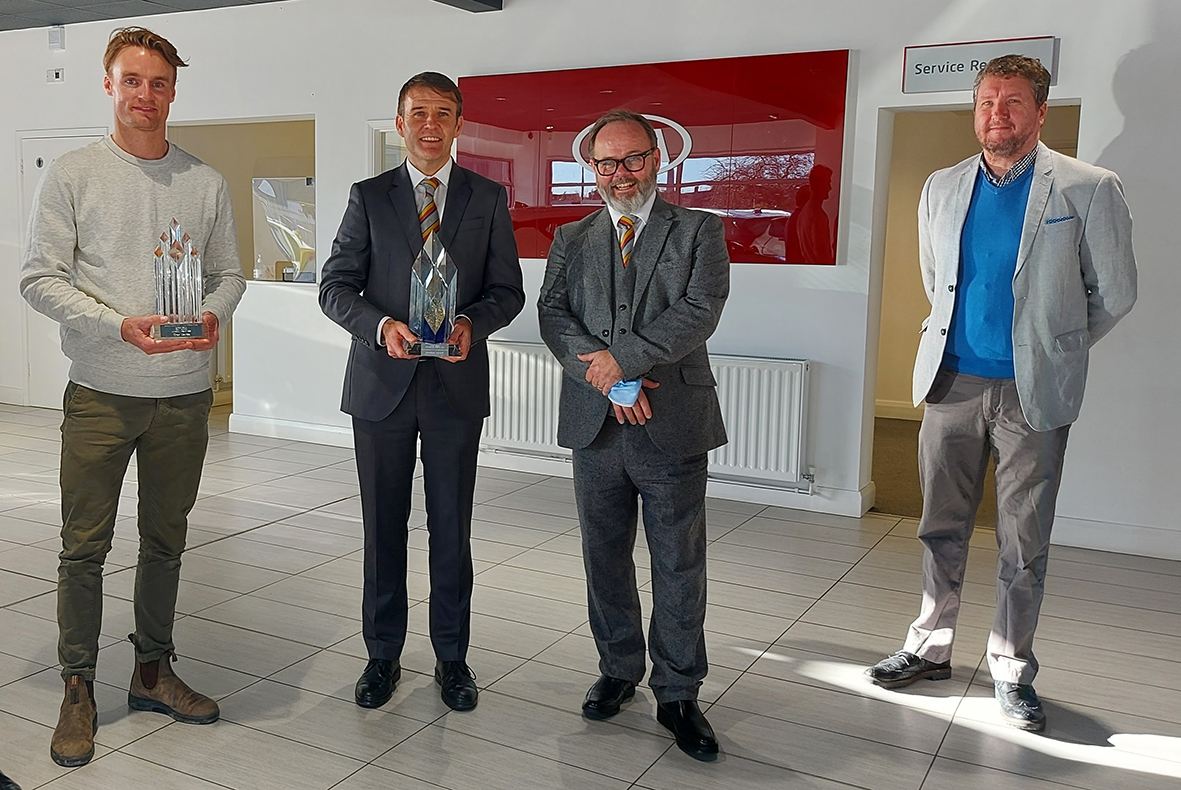 Chaz Davies (above left), a native of Presteigne, called time on his competitive career in World Superbikes at the end of 2021 after achieving many accolades since beginning at the age of eight in 1995.

Many of his most impressive performances came when he was riding non-factory motorcycles, although he dominated the Supersport World Championship in 2011, winning half the seasons races.

He was a force to be reckoned with after switching to World Superbikes, and although a championship win in that category eluded him, he was a frequent race winner, points scorer and championship runner-up.

Chaz, who is now contemplating his next steps away from the saddle said: “I’m honoured to receive the Tom Pryce Memorial Trophy. It came completely out of the blue. During my career, the results you pick up on the way and the other accolades are not exactly expected but you have an idea of what’s coming if you work hard at it.

“This one from Welsh Motoring Writers means a lot and to gain recognition from my own people is a great feeling. Thanks to everyone for the recognition.”

Gravells Motors is no stranger to success, even under recent challenges for the automotive sector in the UK and across the world. The auto-motive retailer group has picked up a number of customer service awards in recent years and is a previous winner of the Tom Pryce Memorial Trophy.

Gravells Motors has a presence across South Wales with a number of brands, including Renault, Dacia, SEAT and Kia. In 2021, Gravells opened its sixth Kia site across the English border in Hereford.

Accepting the award at the company’s newest retail site Gravells Kia Hereford, Jonathan Gravell (2nd from left – with Gravells Motors General Manager Ian Gravell – 3rd from left), managing director at Gravells Motors, said: “It’s a great pleasure and a delight to receive this award. All Gravells staff work tirelessly to put our customers front and centre of the business, so to achieve this award means a huge amount not only to me but to the entire Gravells family of dealerships.

“This award is especially humbling, following the unprecedented circumstances over the past couple of years. I thank all the Welsh Motoring Writers for this outstanding recognition.”

Welsh Motoring Writers chair Simon Harris (above right) said: “Chaz has been a tremendous competitor in his track career, as well as a great ambassador for Wales.

“Now he has decided to move on from his competitive motorcycling career, we thought it was appropriate to mark his achievements with the awarding of our most prestigious honour, and we look forward to seeing where his career path leads from here.”

“Gravells has been a valuable partner for all the automotive brands it has represented in South Wales for many years, including Kia UK.

“Family businesses such as Gravells thrive on loyalty and word of mouth helping retain clients and reach new ones, and this can only be done through excellent customer service. This is at the heart of how Jonathan Gravell runs the business.

“The fact that Gravells Motors recently gained a foothold across the border in England with Kia, although remarkable, should be no surprise.

“Jonathan is a very worthy recipient of the 2021 Terry Davies Automotive Award.” 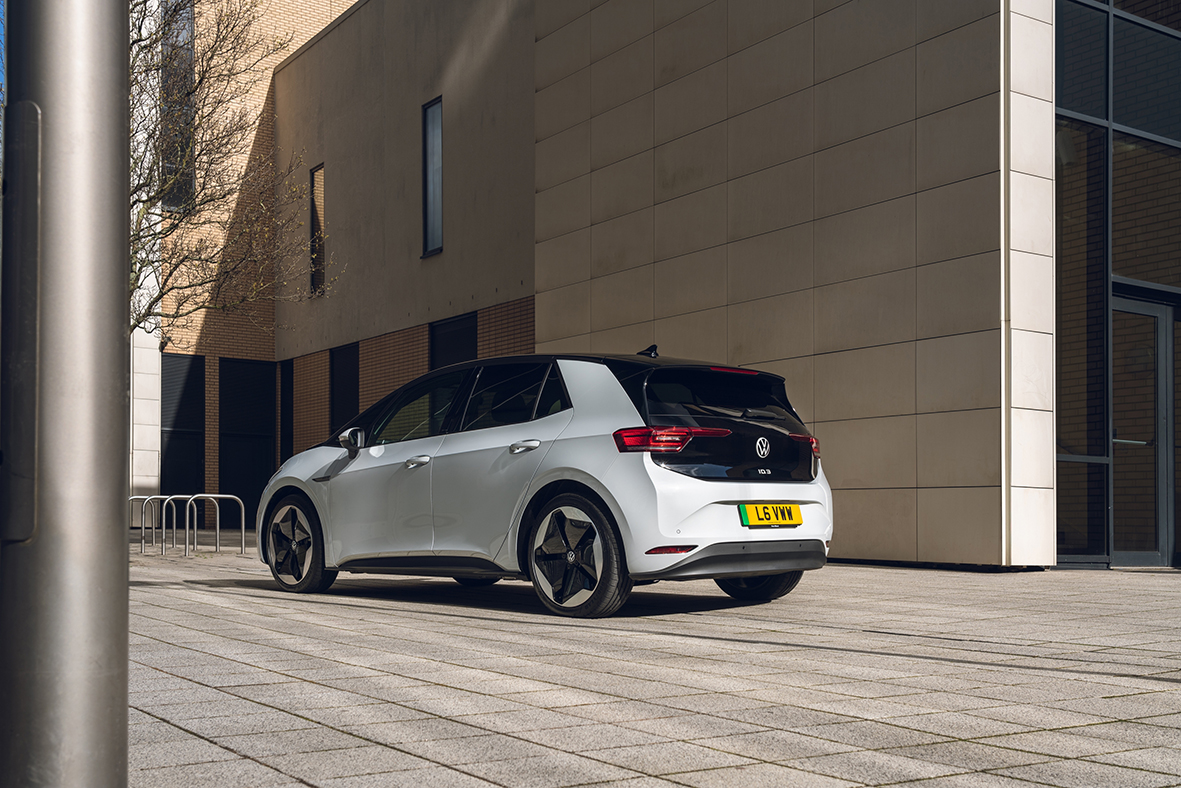 Volkswagen is officially the UK’s best-selling new car brand across 2021, as confirmed by figures released recently by the Society of Motor Manufacturers and Traders (SMMT). The 147,826 vehicles registered last year place Volkswagen’s total UK sales above all other car brands for the first time in its history.

Significant contributions to the sales performance came from across the Volkswagen range. At the top is the Polo, the UK’s fifth best-selling car of 2021, with the perennially-popular Golf very close behind. The ID.3, which has been dubbed ‘the Electric People’s Car’ by experts across the industry, was another star performer, and one of the country’s top-selling electric vehicles. The total number of new Volkswagens registered across last year represents 8.97% of the UK’s total new car market – more than any other brand.

Volkswagen UK’s success isn’t solely down to the mass appeal of a handful of cars, however, but instead the diversity within its range, with models spanning numerous segments from the multi-award-winning UP! city car through to the Touareg premium SUV.

Meanwhile, Volkswagen Group’s dedicated and highly advanced MEB modular electric platform represents a huge investment from the company and provides the basis for a growing number of BEV models including the ID.3 family hatchback and the ID.4 – itself an SUV. This year will also see the UK debut of the sleek ID.5, as well as the highly-anticipated ID. BUZZ. 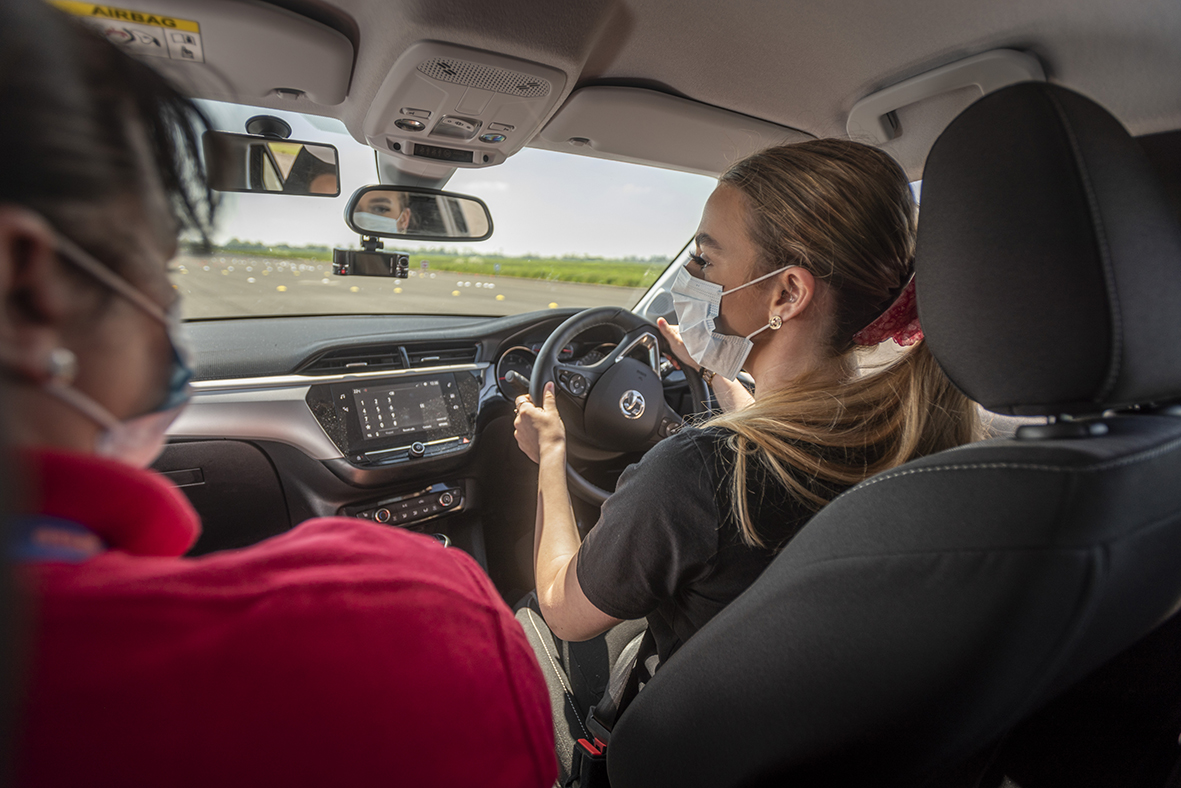 New research has revealed that the pressures around learning to drive and passing a driving test will continue into 2022.

According to a survey of 150 driving instructors from across the country undertaken by Young Driver, 70 per cent say they still have a waiting list for starting lessons – with 39 per cent of those admitting pupils are in for a long wait before they can begin learning.

66 per cent of the instructors questioned also said that in their experience the waits for driving tests haven’t reduced at all, with many of their pupils facing long delays before they can book their practical assessment. The remaining 34 per cent felt things had improved slightly since the summer – but zero respondents to the survey felt it was anywhere near being ‘back to normal’.

Young Driver, the UK’s largest pre-17 driving school, asked instructors for their advice to those waiting to begin learning on the road. Instructors advised planning early was the key – 16-year olds should apply for their provisional licence in plenty of time, as there have been delays with paperwork, as well as trying to secure a driving instructor up to six months before when they want to begin lessons. Many advised that learners should also use the opportunity to get ahead in their theory knowledge. However, several warned those just starting out not to book their test on the off chance they’d be ready when the time came, saying that was causing additional strain on the system.

Sue Waterfield is head of marketing at Young Driver, which teaches 10 to 17-year olds how to drive. She said: “We work with qualified driving instructors across the UK and from what we’re hearing, things aren’t improving at all when it comes to getting learners through their lessons, passing their tests and on the road. Driving is an essential life skill for many young people, particularly for those in rural areas who may not be able to rely on public transport. So, denying them that opportunity can have huge repercussions in terms of education, employment and mental wellbeing.  At Young Driver we’ve noticed we have had an increase in 16 and 17-year olds taking lessons to prepare the best they can for when they manage to get an on the road instructor. It makes sense to gain as much safe experience as possible ahead of that time. Our pupils have already learnt the basics of how to steer, change gear, brake, park and manoeuvre, meaning they can use the on the road lessons to learn more about how to safely navigate other road users and handle some of the more complex aspects of driving.

“Learners can also utilise technology. In lockdown we launched an app which has everything you need to help prepare for the theory test, as well as 360° VR tuition videos which cover different situations on the road, helping viewers get to grips with some key manoeuvres when they can’t get behind the wheel.”

Young Driver has delivered more than one million driving lessons to 10 to17-year olds at its 70 UK venues. For more information visit www.youngdriver.com or download the Young Driver App. 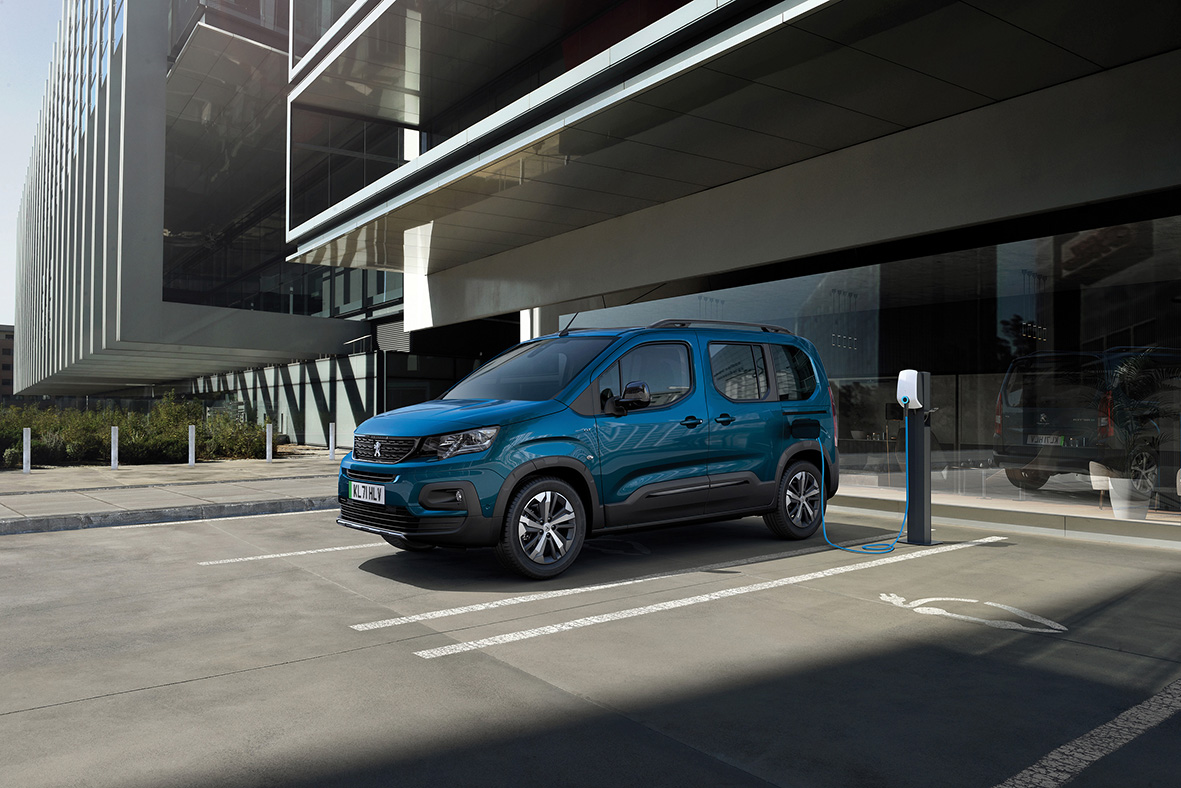 PEUGEOT is accelerating its move to electrification and from 2022 will sell its popular MPV range, made up of the Rifter and Traveller, exclusively as full electric models* to meet growing customer demand for electric vehicles. Already on sale, the e-Rifter and e-Traveller cater to the needs of businesses and fleets as well as private buyers.

The e-Rifter and e-Traveller have already impressed fleets and private owners with their ease of use, low running costs, versatility, and practicality. To meet the growing demand for electric vehicles, PEUGEOT has ceased production of the petrol and diesel variants of the Traveller and Rifter*.

The move comes after the UK saw the largest year-on-year increase in electric vehicle registrations. Last year, fully electric vehicles accounted for more than one in nine new cars sold, representing a 76% increase on 2020, according to the Society of Motor Manufacturers and Traders (SMMT).

The new PEUGEOT 308 and 308 SW, soon arriving to the UK, will expand PEUGEOT’s electric vehicle range. From launch both the 308 and 308 SW will be available with a plug-in hybrid powertrain, with a fully electric 308 and 308 SW arriving as early as 2023. 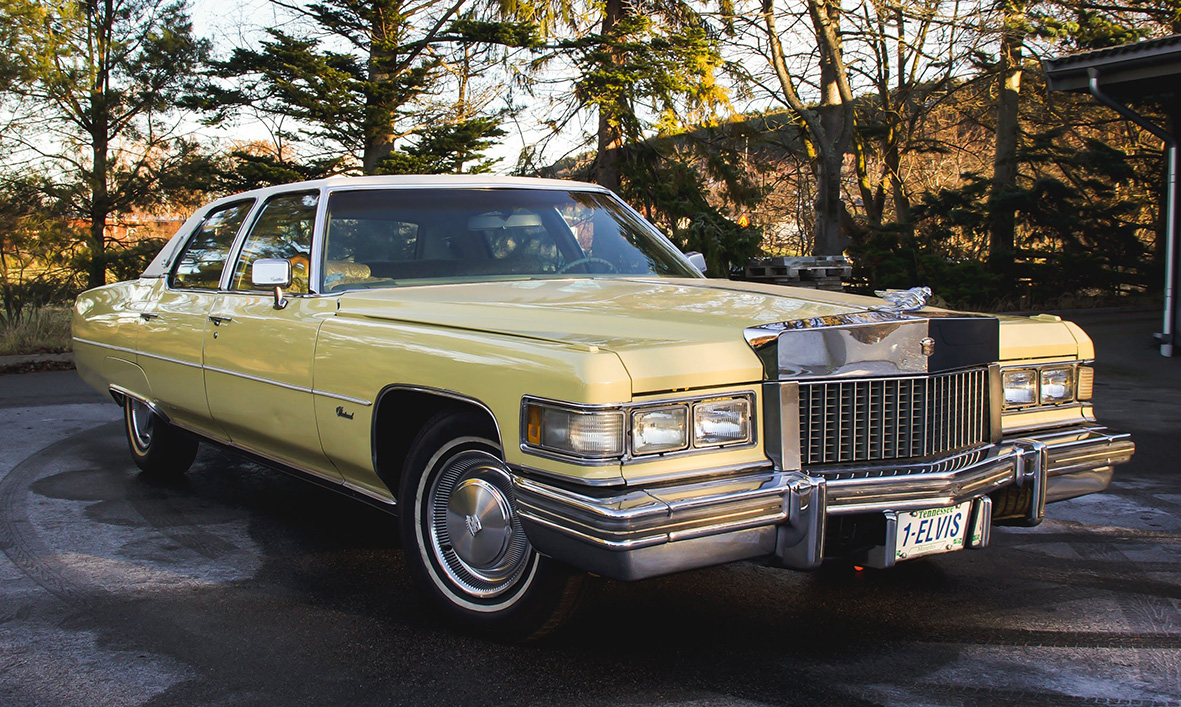 A royal entry into the new year is guaranteed by Car & Classic’s online auction, where a majestic 1975 Cadillac Fleetwood Brougham is guaranteed to instil fever in ‘The King’ Elvis Presley’s fans, who surely can’t help falling in love with the rock star’s car.

Still looking regal and magnificent, if unmolested, the 8200cc Cadillac was bought new in 1974 (1975 MY) by Presley himself from Madison Cadillac Inc, as all the paperwork – more extensive than any of the cars in the Elvis museum! – will reassure any suspicious minds. He specified the sunroof and bonnet-mounted ‘Goddess’ (still there after almost fifty years) and paid $12,512 for it.

The King is estimated to have bought more than 200 Cadillacs in his lifetime. He usually drove them for a while before donating them to family and friends. This particular Caddy was given to Elvis’s doctor in 1976.

Royal physician Dr G. Nichopoulos used the car for the following ten years, when the current owner bought it before selling it in 1990 and then buying it for a second time. The vendor in Sweden is now feeling it is time for them to go their separate ways.

Fittingly, the Cadillac is prominently photographed at many venues, a testament to its worldly, glamorous provenance; Car & Classic’s listing includes period images, a large ‘Graceland’ backdrop, as well as a framed 14k gold key for the car. The car requires recommissioning before being enjoyed but is said to be complete.

“You don’t purchase this car because it’s the ultimate example of American automotive greatness in the Seventies,” says Car & Classic editor Chris Pollitt. “You are buying a piece of original history, a period chariot belonging to one of the most famous showmen in the world. Shame it’s not pink.”

It is probably not a coincidence that The Cadillac’s auction start fell on 8th January, the day The King was born.