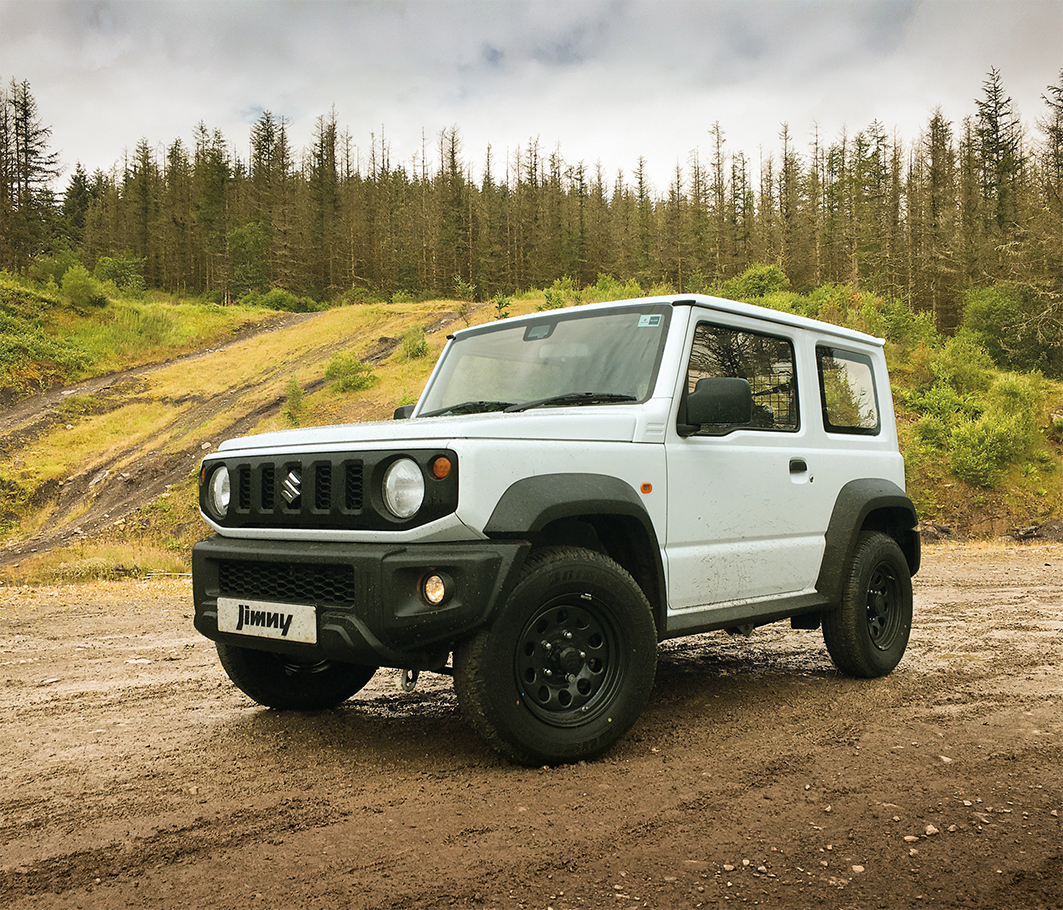 I regularly browse the small ads; inevitably, it’s the cars that attract my attention. At the current time of writing there’s a Suzuki dealer not far from here advertising a nearly new Jimny. It’s in range-topping SZ5 spec, has just under 4000 miles on the clock, and judging by its registration number, is just over a year old. The asking price is £31,450.

Talk about strong residuals. That boxy, little-used, 4×4 is on the forecourt at £10,000 more than it cost originally. Such is the demand for Suzuki’s new Jimny – and second-hand cars in general, currently – that prices have gone sky-high.

There’s also another not-so insignificant fact to take into account: You can no-longer buy a brand new four-seater Suzuki Jimny, in SZ5 spec or otherwise. The Jimny’s 1.5 litre engine, you see, is not the most eco-friendly of things, and changes to the emissions regulations introduced on 1 January 2021 meant Suzuki, who need to maintain a fleet average of 95g/km CO2 for their passenger cars, were all-but forced to stop selling what is probably their most instantly recognisable vehicle.

Or were they? Notice the use of the terms four-seater, and passenger cars.

By removing the back seats – which if you’re a Jimny owner, you no doubt have folded flat almost all of the time anyway – and fitting a fixed bulkhead – like the ones in vans, to prevent anything in the back sliding too far forwards under braking – Suzuki were able to reclassify the Jimny as an LCV (that’s Light Commercial Vehicle). That meant they accessed the more lenient regulations that cover commercial vehicles under 3.5 tonnes, whilst simultaneously removing any obligation for them to have to add what is now the Jimny LCV’s CO2 contribution to its fleet total. Clever, eh? You might not be able to sell Jimny cars, but you can sell Jimny vans.

Rear seat removal and extra mesh panels aside, the differences between Jimny and Jimny LCV are slight. That aforementioned 1.5 litre engine still sits under the squared-sided bonnet, it’s still coupled to a 5-speed manual gearbox packed with short ratios. Underneath there’s the same ladder chassis, rigid axles and coil springs. The part-time four-wheel-drive system is unchanged too, meaning the Jimny LCV is every bit as capable off-road as you’d expect it to be (from first-hand experience, I know a Jimny will go almost anywhere you point it – pic below left). Steel wheels replace alloys, halogen headlamps replace LEDs, and mirror backs and door handles are black instead of body coloured. Inside, there’s air-con instead of clim-ate control, the heated seats are missing, and there’s no built in sat-nav. You do still get DAB and Bluetooth though. One could argue however, that the more utilitarian look actually suits the Jimny. 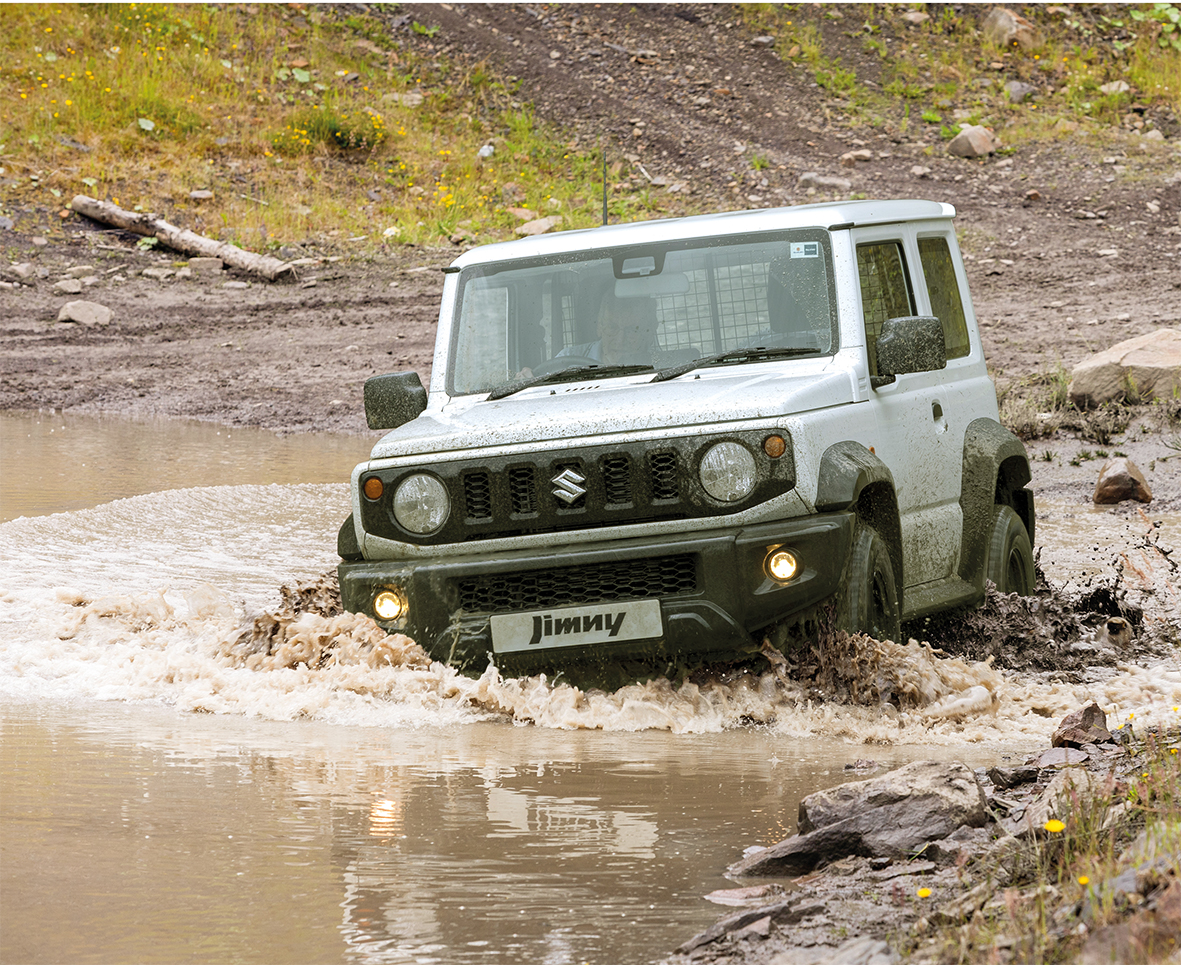 The on-road driving experience is … umm… well… characterful. Don’t buy a Jimny if you’re a motorway regular. There’s lots of wind noise, and anything over 50mph feels quite frantic. There’s body roll aplenty, and the steering is quite vague. Around town, things are better, a Jimny feels surprisingly lively at slow speeds and the high driving position allows for great visibility; nipping through traffic is great fun. Fuel economy? Expect 40mpg on a good run. Oh, and one other thing, the Jimny LCV’s payload is a meagre 150kg – you can get more weight in a Fiesta van.

The Jimny LCV, clearly then, is not for everyone. I loved it, but I appreciate not everyone will. It’s strictly a two-seater, more practical than posh, and it’ll only carry light loads – but, it will carry them anywhere you wish to take them. It’s also in very limited supply: just 500 are due to be imported here this year. The good news is if you can find one, and none of the above bothers you, in the current market a brand new Jimny LCV works out far cheaper than a nearly new four-seater one.

Funnily enough, I just happened to be strolling around a (different) Suzuki dealer’s forecourt this very afternoon. Just browsing…

Many thanks to everyone at Suzuki’s UK press office.