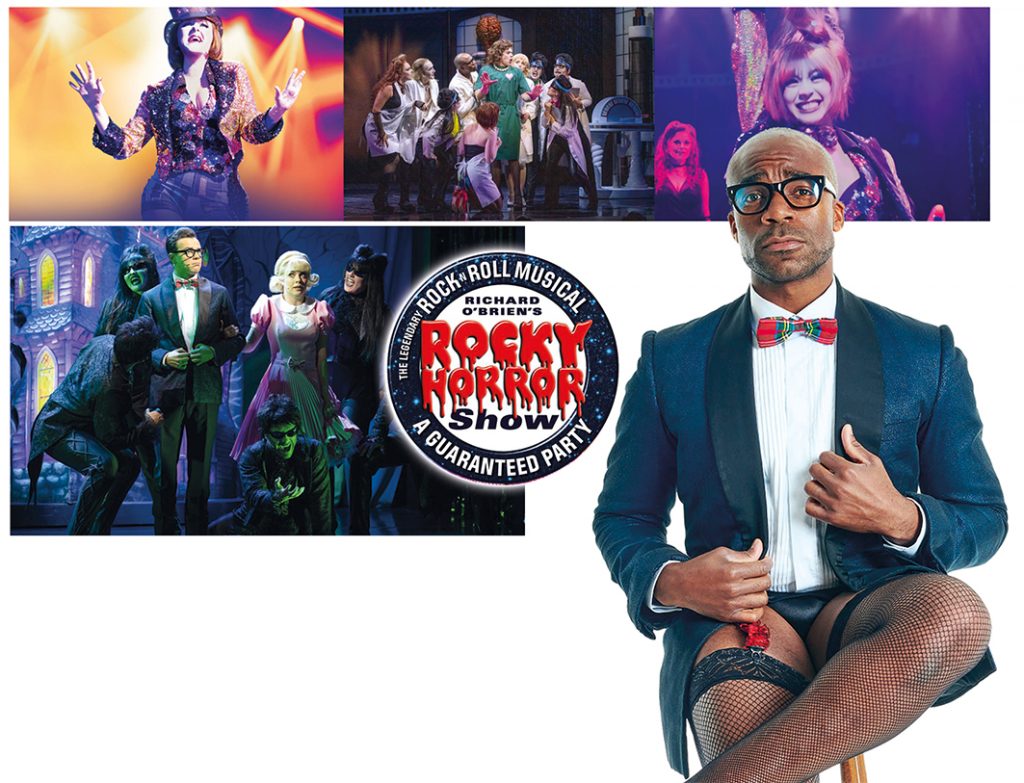 The first time I went to see the Rocky Horror Picture Show at Swansea Grand Theatre – back in the days before they dropped the word ‘Picture’ from the title – I was given the same advice I imagine everyone gets: you HAVE to dress up. Because even if you feel stupid, you’ll feel even worse if you don’t.

And do you know what? They were right. Because if you’re going to watch the Rocky Horror Show live on stage and sing along with the Sweet Transvestite from Transylvania, then you have to go for it. You can’t treat it like another night at the theatre – it’s more like Halloween, but with less pumpkins and more suspenders.

But whether you’re an old pro or a Rocky novice, you’ll be able to find out for yourselves this May when Richard O’Brien’s sci-fi comedy makes a welcome return to the Grand. Headlined by Strictly Come Dancing winner Ore Oduba as Brad Majors, he’ll be joined by Stephen Webb (Jersey Boys/ Legally Blonde) as Frank, Philip Franks (The Darling Buds of May) as The Narrator, and Haley Flaherty (Mamma Mia/Chicago) as Janet.

It’s just a jump to the left…

It’s hard to believe that, after all the hype and construction work, not only is Swansea Arena finally open to the public, but it keeps adding to the star-studded line-up of names heading our way this spring which includes Michael McIntyre, Bill Bailey, and Welsh funnymen Rhod Gilbert and Rob Brydon. But along with the household names, it’s great to see the arena being put to good use by some of the Swansea’s great local events, such as the returning Swansea Comic and Gaming Convention that will take over the venue for a weekend in April. 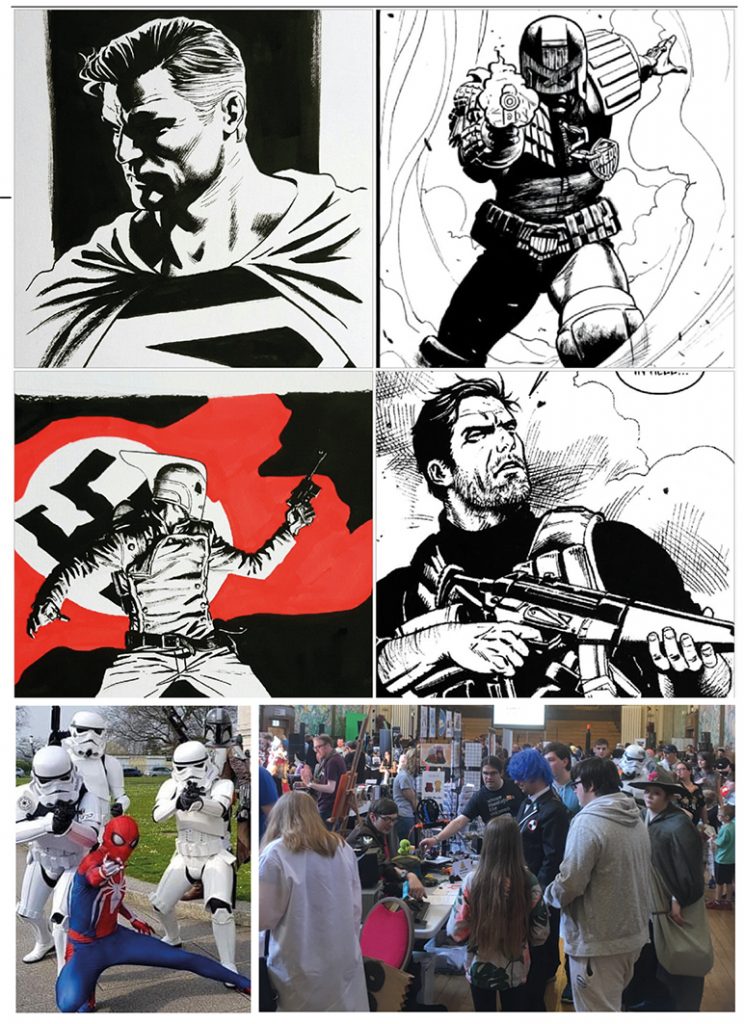 A pop culture showcase that crams every-thing from comic book creatives to game designers under one roof – think Batman, Star Wars, and fantasy games that require dice with more than six sides – there’ll be some well-known names like Nigel Planer of The Young Ones fame on-hand to sign autographs and take some photos, and plenty of stalls offering all manner of curiosities. But best of all, it also shines a light on some of the fantastic homegrown talent we have right here in the city and, on top of that, it raises money for good causes at the same time, with this year’s beneficiaries being Welsh mental health charity Hafal.

More details and line-up can be found on their Facebook page and, as with the Rocky Horror Show, dressing up is also encouraged – be sure to dig out the cape and spandex before visiting!

Each year, the Glynn Vivian Art Gallery purchases a new work for its permanent collection by the winner of the Wakelin Award, an annual award presented to a Welsh artist in memory of Richard and Rosemary Wakelin. Administered by the Friends of the Glynn Vivian, the 2021 winner is mixed-media artist Cinzia Mutigli, who was born in Edinburgh and based in Cardiff, and who was chosen by a former winner and fellow Cardiff-based artist, Anthony Shapland. 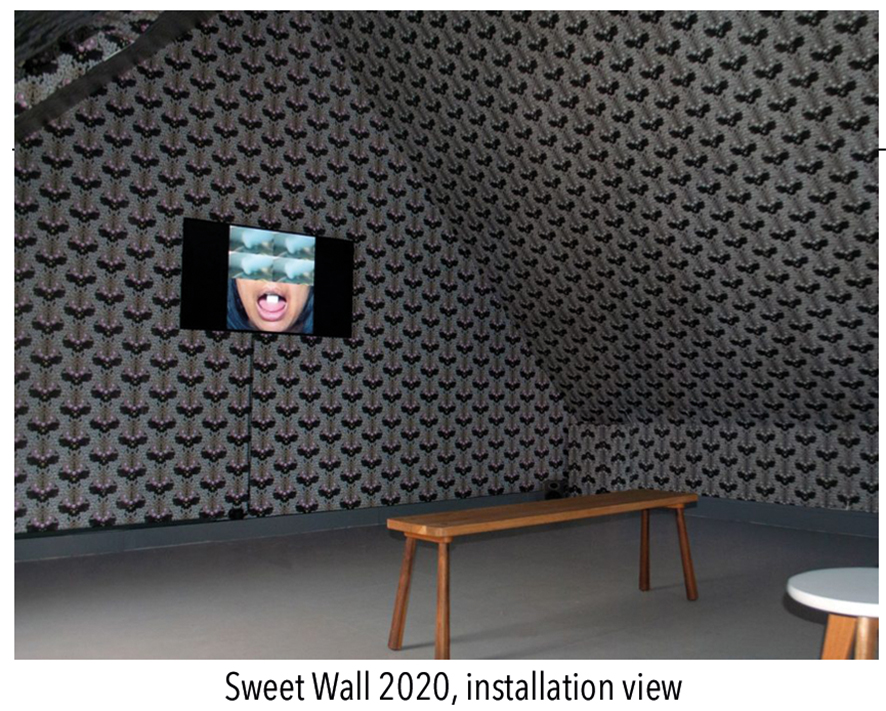 Cinzia uses text, performance and video in her work, and the winning entry, Sweet Wall, 2020, is a multi-dimensional film installation in which “she considers how domestic, socio-political and popular cultural environments interact and how they impact our persona, psychologies and sense of self.”

It opens in April and runs until September.

After nearly two years to the day, Swansea’s Fluellen Theatre are finally back where they belong – onstage at Swansea Grand Theatre.

In February, the city’s flagship theatre’s resident group were treading the boards once more when their Lunchtime Theatre, a monthly showcase of the best in new writing, returned to the theatre’s Arts Wing. And following March’s My Funny Valentine, they will be back in April with The Black Dahlia by Emily D`Arcy, and again in May with Two Side Triangle by Ron Meldon. 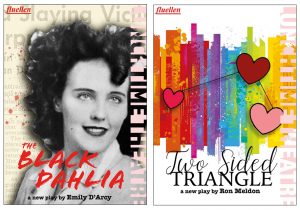 But that’s not all. The gang, seemingly making up for lost time, will also be on the road with many new shows over the coming months, which includes introducing a younger generation to Fluellen’s specialist subject, the works of William Shakespeare. As art-istic director Peter Richards (right) explains: “We have Shakespeare Workshops planned for Secondary Schools in South Wales and a performance of Flying, which is a play we devised just before Covid struck. It is designed for younger children and was performed, amongst other venues, at the Maritime Museum.”

Talking about Shakespeare, there is a chance that their much-delayed Much Ado About Nothing – which was due to be staged at Swansea Grand Theatre in 2020, and we all know what happened next – might return this summer, and they’ll also turning their attention to another literary favourite: “We will shortly be in rehearsal for Tea With Jane Austen which is a reworking of our 2017 one-woman play Jane,” says Peter. “The excellent Emma McNab will be again playing the eponymous heroine. We will be starting a tour at the New Gower Hotel in Swansea in June.”

If that wasn’t enough, this October sees a revival and the premiere of two plays from the pen of Philip Burton, the leading Welsh playwright whose achievements have been somewhat overshadowed by the fact that he discovered, and lent his surname to, Wales’s greatest Hollywood star, Port Talbot’s Richard Burton. First up is the returning Granton Street, followed by the sequel White Collar, which Peter says takes the story of the Davies family a few years closer to the Second World War. Both plays will be staged at Swansea Grand Theatre’s Arts Wing during the week of October 10.