This is the second section of the newly inaugurated 50 mile Gower Pilgrimage Way, a walk lovingly created by David Pope, a proud and exiled Swansea man, linking all 17 historic churches in Gower, running from Penclawdd in the North and ending at St Teilo’s in Bishopston in the southeast. It’s the magazine’s intention to cover the route in 5 sections. 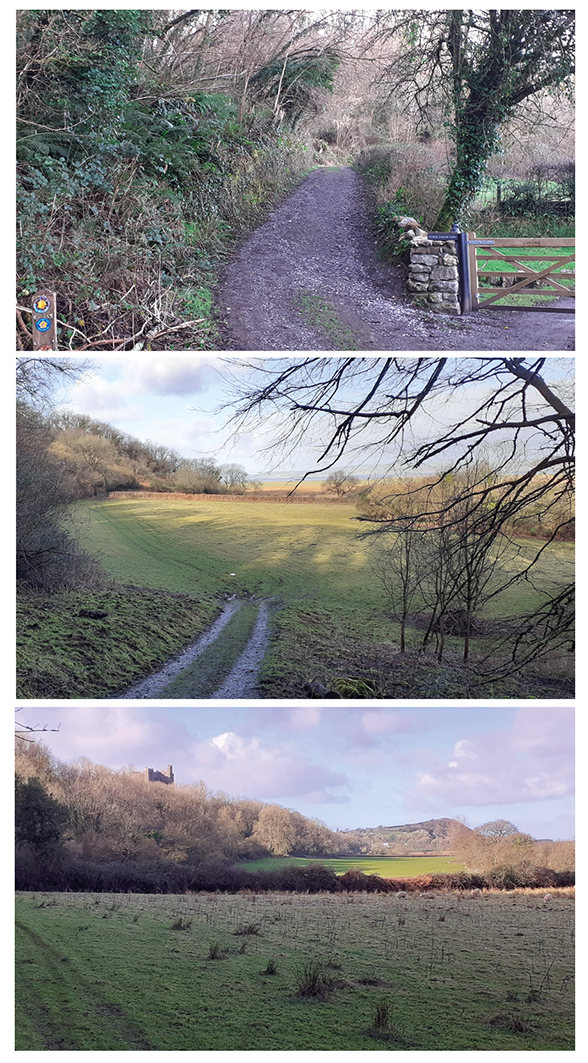 We began last month, which took us from the start to St Rhydian & St Illtyd’s Church in Llanrhidian from where we now continue on the second stage to Llangennith. So, let’s get cracking.

Walk through the churchyard crossing a stone stile at the end of the path and continue for around 50 yards to reach a minor road. Turn left and walk with care along this road, which is waymarked as being on the Wales Coast Path. After passing Staval Hager Farm on the right, the road becomes a track, and later a path. Continue to follow the Wales Coast Path signs, ignoring other footpath signs to the left.

The North Gower coast is undoubtedly an overlooked beauty. Much of the attention is grabbed by the more dramatic south Gower but this area has loads to offer. As a result of its geographical location the sea to the south is all rage and fury creating dramatic cliff scenery and beautiful bays, whilst the sheltered north is calmer, more serene and peaceful but no less magnificent with its moody salt marshland and gently undulating hills. It really is a joy.

* MUD KLAXON* From here it can get a tad sticky especially after you pass Landimore a bit further on, so ditch your Green Flash and flip flops as appropriate footwear is essential. The route passes the dramatically positioned Weobley Castle above you on the left, which was originally constructed as a fortified manor house by the de la 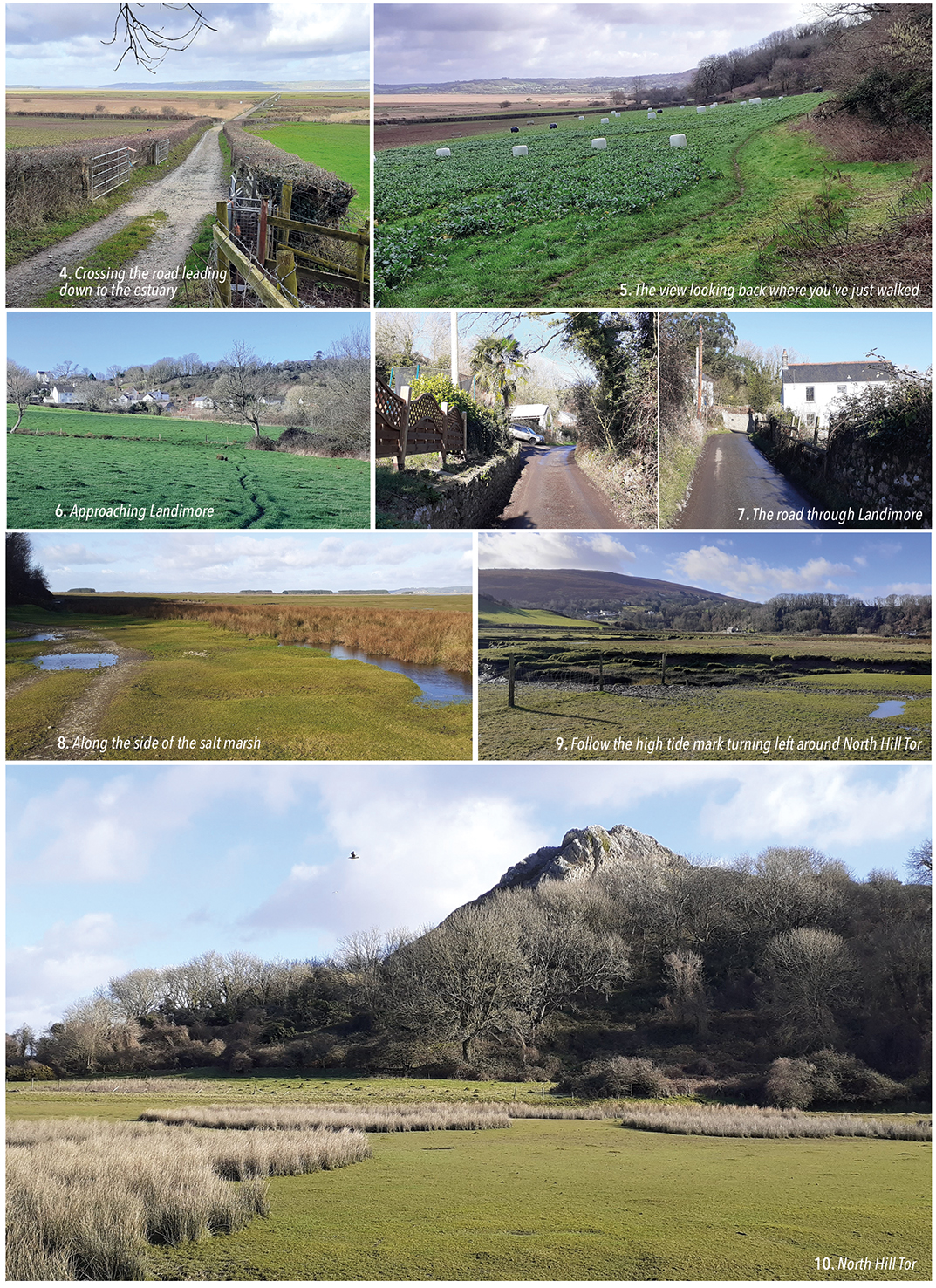 Bere family, stewards to the Lords of the Gower and from which there are magnificent views over the salt marsh, the Burry Estuary, and over to Whiteford Point and Pembrey. The Coast Path signs lead through the village of Landimore and National Trust land at Bovehill and then right along the side of the marsh below North Hill Tor. On reaching the point where the Coast Path divides into a High Tide route and a Low Tide Route, take the High Tide route which turns left and leads up the hill towards Cheriton. The Coast Path signs lead to a lane, where you turn right and follow the lane to the road. At the road, turn right and walk carefully down the hill for around 100 yards to reach the church of St Cadoc at Cheriton.

Generally regarded as the prettiest of Gower churches, it’s really difficult to argue. Nestling on the floor of a steep wooded valley, alongside a babbling stream, the church is very pleasing on the eye indeed. If you were looking for a stock photograph for an archetypical quaint and picturesque village church then you couldn’t go far wrong with St Cadoc. Built around the 14th century, it has been described as a miniature cathedral and was commissioned by the Knights Hospitaller to provide funds to finance the care of sick, poor or injured pilgrims on the crusades to the Holy Land. 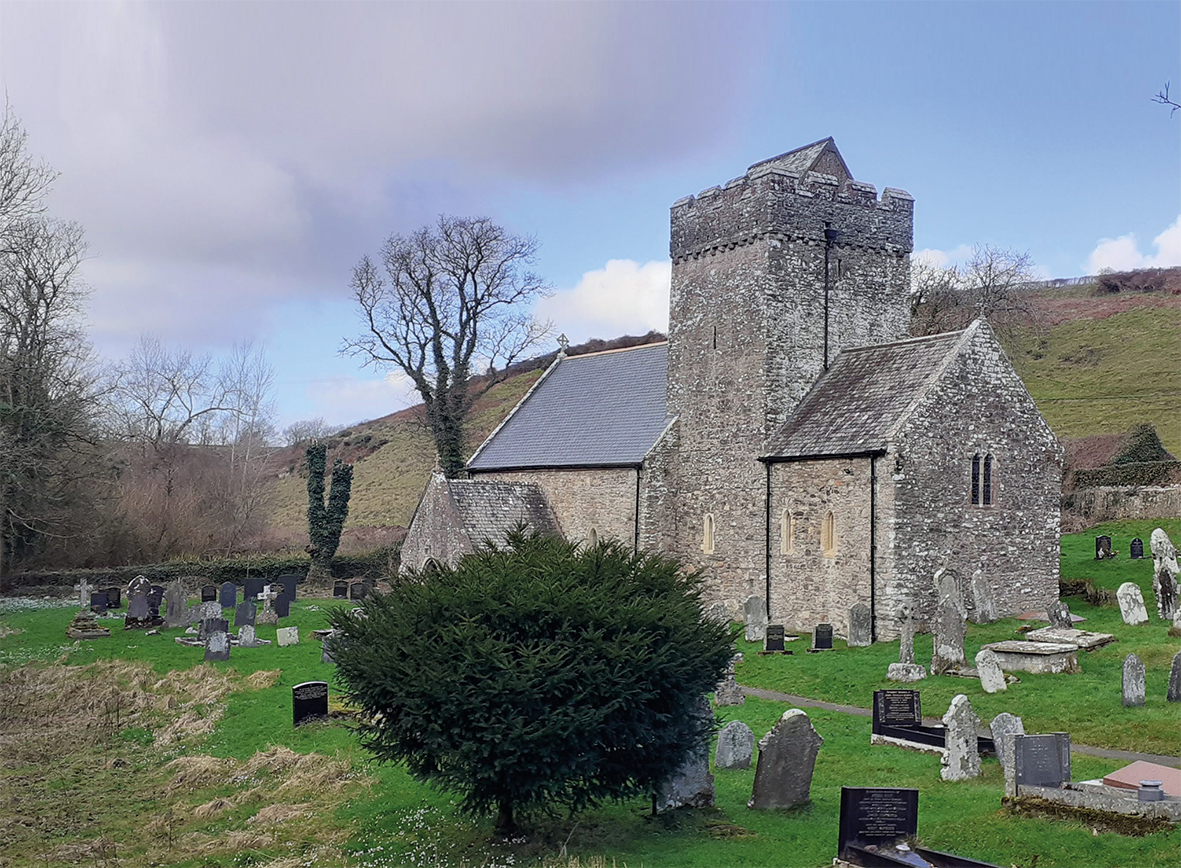 The Knights Templar, together with the Knights Hospitaller mentioned above, are names of two very mysterious and secret institutions, and keep on cropping up when reading about the churches in this part of the Gower as St Illtyd’s, St Madoc’s, (which you’ll pass in a short while) and St Cadoc’s were all associated with one or the other. 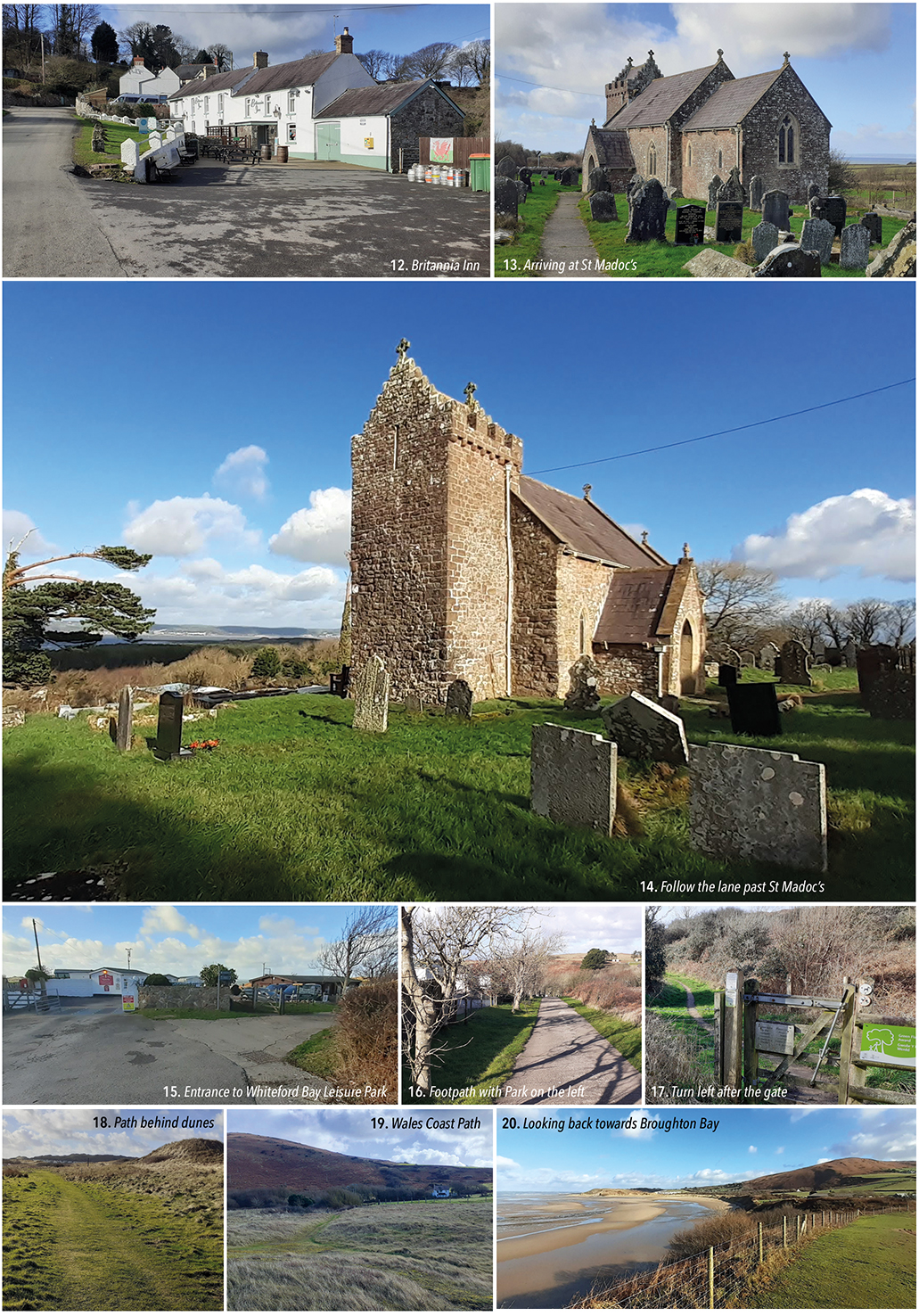 The original Hospitallers and Templars were founded in Jerusalem in the 11th and early 12th centuries. The Hospitallers formed the order of the Hospital of St John of Jerusalem (forerunners of the St John’s ambulance) and was set up by Italian merchants essentially to care for the poor and sick pilgrims heading for the holy city. The Templars meanwhile, began in 1120 as a small group of knights who protected Christian pilgrims on their way to and from Jerusalem, but soon took on more general military activities as did the Hospitallers. Churches and their lands were adopted or gifted to these organisations to help finance them both. Amazing to think that this rather remote corner of Wales, let alone Europe was linked to such historic world events. I can assure you with a reasonable degree of certainty that protection from a savage mediaeval fighting force will not be required on this particular pilgrimage and I’m sure that a packet of blister plasters and some Vaseline will suffice on the medical side of things. But you never know!

Carry on up the hill into Llanmadoc passing the Britannia (go on, I dare you) on your right until you arrive at St Madoc’s church at the top of the hill. A church was thought to have been founded here in the 6th century, but the present church dates probably from the 13th century, with extensive renovation carried out in the 19th century. Founded by St Madoc who it is thought was one of three Knights who were protectors of the Holy Grail. Leaving the churchyard at Llanmadoc church, turn right and follow the road to the entrance to Whiteford Bay Leisure Park. Immediately before this, follow the signed footpath leading to St Madoc’s Christian Centre to the right and at the bottom of the hill, turn left along the signed footpath. After a few hundred yards, the path is joined by the Wales Coast Path, which we will be following now for most of the remainder of this section. 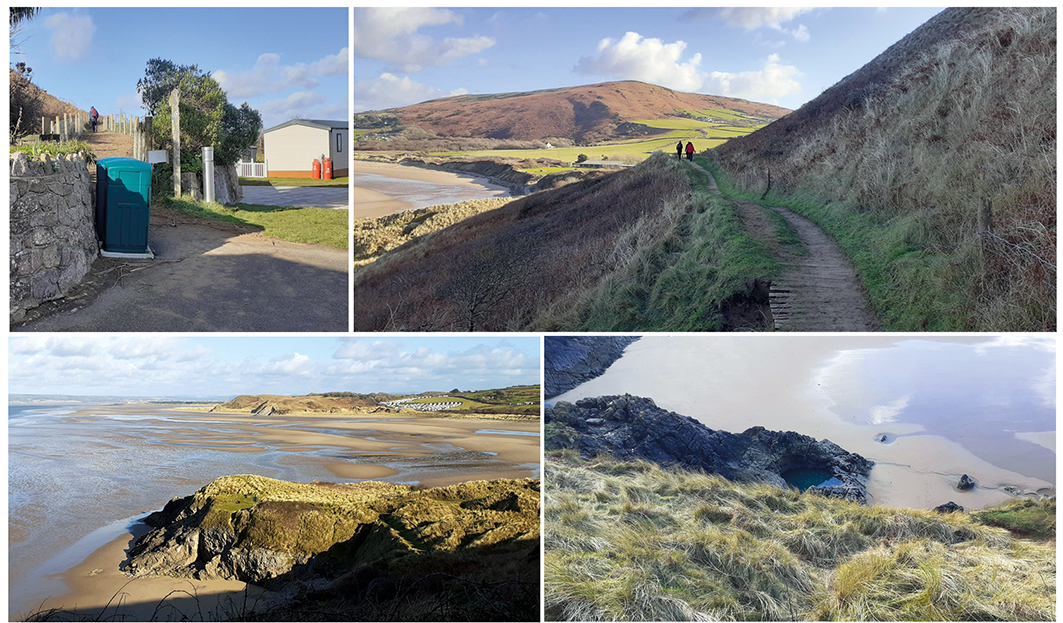 21. Start of the cliff path 22. On the wooden slats path looking back 23. Looking down on the rugged coastline 24. Blue Pool

At Broughton Bay, the Wales Coast Path runs behind the dunes, but it is possible instead to walk along the beach, rejoining the Coast Path just before the end of the bay, where there is a concrete path through the dunes, leading to a caravan park and an attractive green area. I stayed in the dunes. Access to the coast path through the caravan park is slightly confusing but you’ll get there eventually if you bear in mind your eventual target is at about 1 o’ clock to the right. Go past the yellow bollards ahead at the entrance to the caravan park, and continue on the tarmac drive through the park, up the hill and curving round to the right. Look out for caravan No 109 and the cliff path is about 20 yards further on to the left, leaving the caravan park by the path indicated by a Wales Coast Path sign. After a short distance, the path forks. Take the left-hand fork, which has wooden slats underfoot. You should be on the higher path rather than the lower one. Follow the Coast Path signs until it descends to the beach at Burry Holms Island.

Along the way there are fine views to the right of the south Carmarthenshire coast and also towards Amroth, Saundersfoot and over to Tenby and Caldey Island. You could also take a brief detour to have a look at the famous Blue Pool. Now, although I’m reasonably well acquainted with the major landmarks of Gower, I’ve never actually been here before, so it was a new one for me. When the tide is out a lovely sandy beach is exposed and the rockpool is filled by the retreating tide. If I’m being brutally honest, and I’ll whisper this, I was a little bit disappointed. The path down to the beach is very steep so I only went half way to save my ageing legs, but from that vantage point it wasn’t as impressive as I had expected and the water, rather than being blue, was petrol green, despite it being a beautiful day (although I wouldn’t hold that against it). Maybe I should have got a bit closer to appreciate it, so please don’t judge me. Anyway, if you do want to get closer, be prepared for a thigh bursting return walk up the cliff. It’s not far but you’ll know all about it.

As you approach Burry Holms, the vast expanse of Rhossili Bay gradually comes into view to your left and simply put, the vista is stunning. For most people the most iconic view is obviously from Rhossili itself but it’s equally as rewarding from here. It literally knocks your socks off, so you might need to sit down. Try and keep this walk for a sunny clear day so that you can fully appreciate the majesty of it all… Nature eh? Phew! Ok, once you’ve composed yourself and calmed down, you now have the option to cross to the island where you’ll have around 2.5 hours either side of low tide to do so, but please take great care as this is a dangerous area. 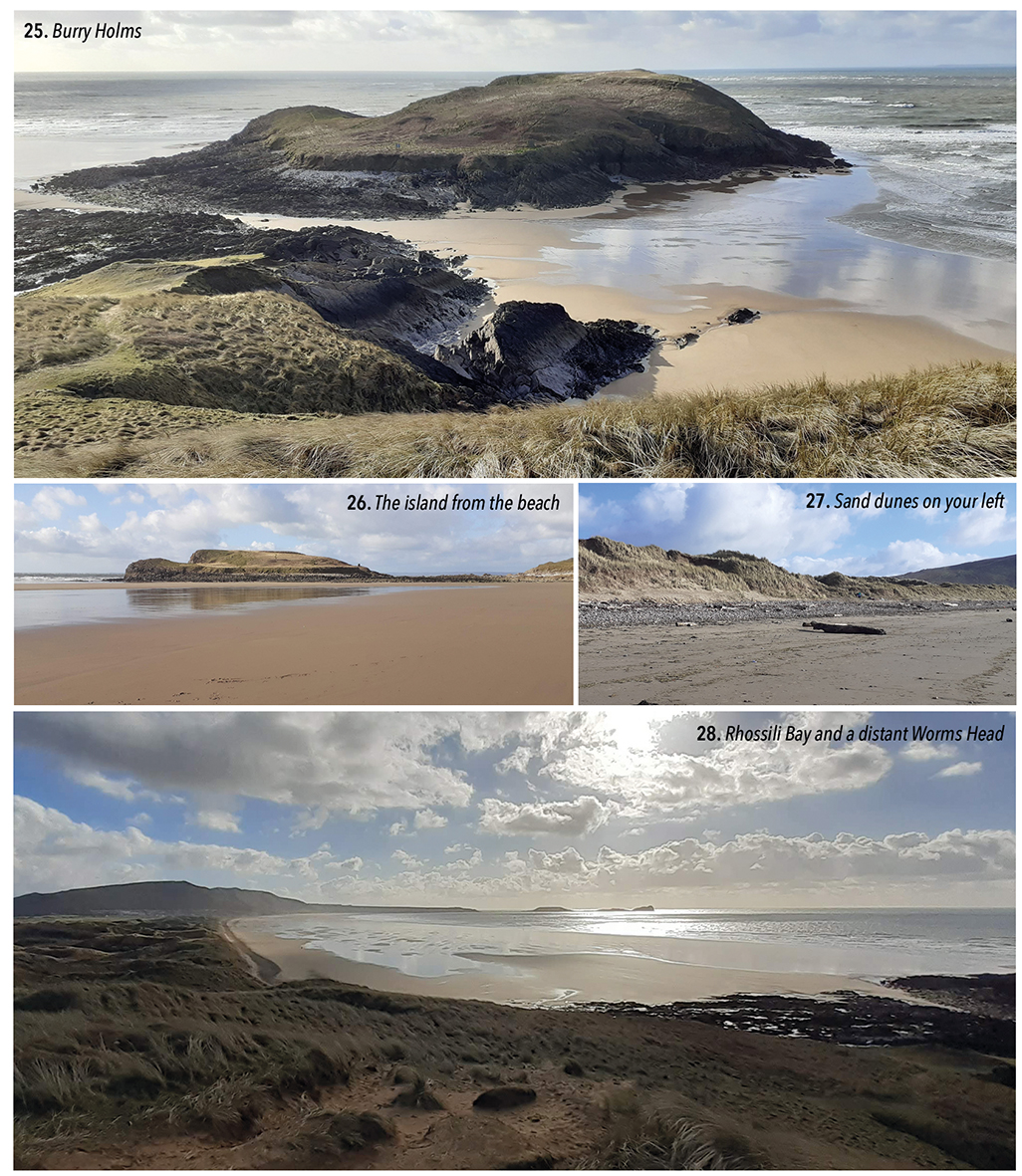 There are the ruined remains of a 12th century stone church on the island, which replaced an earlier one said to have been built by the hermit Caradog of Pembrokeshire. There was also a mediaeval monastic enclosure with connections to St Cenydd, after whom the village of Llangennith is named.

Continue along the beach heading towards Rhossili for around a mile, where the feeling of being rather small and insignificant as you’re dwarfed by the vastness of your surroundings is quite palpable. You’ll get over it though I’m sure. 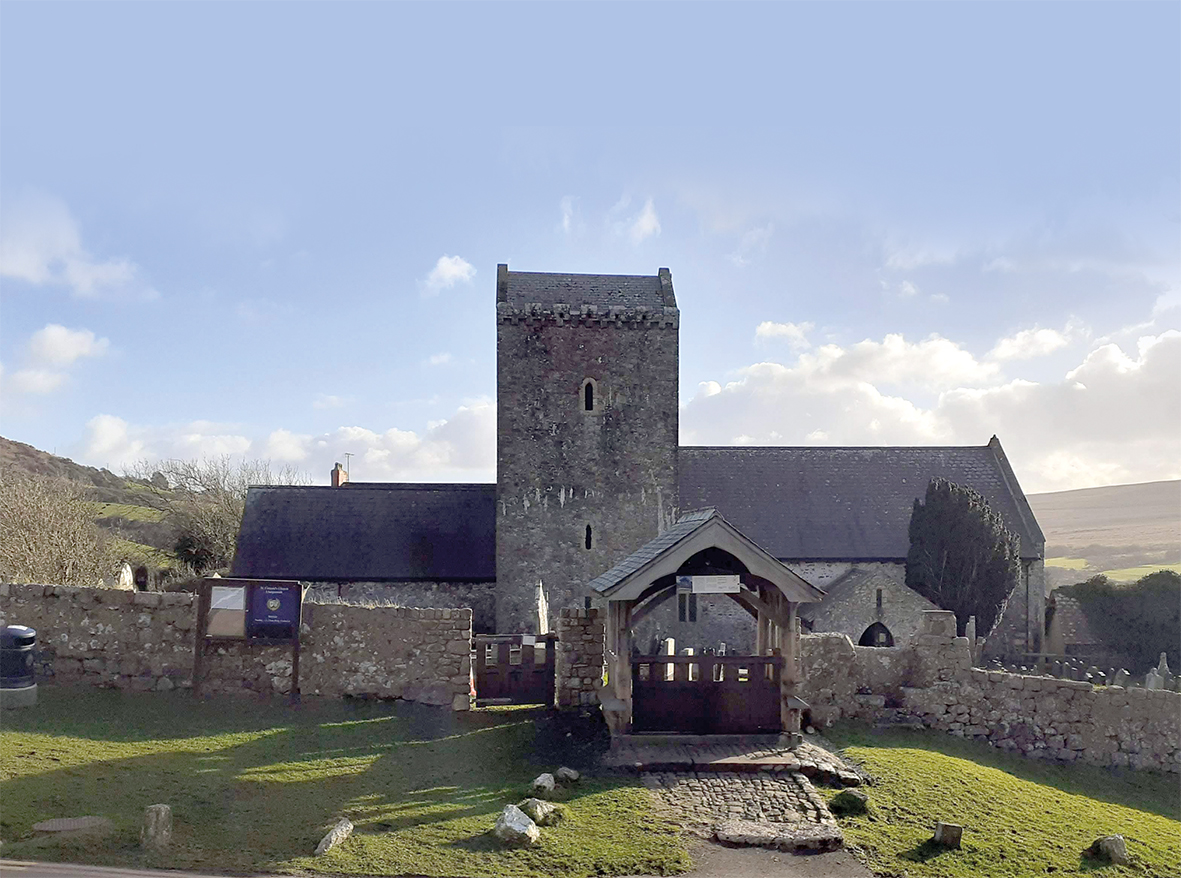 Cross a stream called Diles Lake until you reach a wide path through the dunes at Hill End to the car park, (you can also reach the car park if you head inland to the right of the stream) walk up the hill to the entrance to the caravan park passing the iconic campsite to your right. Now, many people of my sort of age group regarded camping here in the 70s as a rite of passage, where we could shake loose the shackles of our dour working-class surroundings and pretend to be Californian surfer dudes against a sound track of the Beach Boys and the Doobie Brothers. Ah, the summer of ‘76 when the weather was scorching hot and the surf was corduroy to the horizon (or something like that). At the entrance, turn left and follow the road into Llangennith. You do have safer options if you want to avoid the road (check the O/S map for paths) but if you want to stick religiously to the Pilgrimage route (pun intended) then stick to the road. After about half a mile or so bear right at the mini roundabout and into the village and to the walk’s end. The next stage continues from here, so more on Llangennith’s church next month. As a reminder, a wealth of information about the Pilgrimage walk is available on the dedicated website so please visit www.gowerpilgrimageway.org.

The Byrds: I am a Pilgrim

Hozier: Take me to the Church