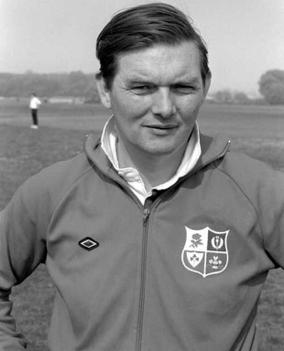 Carwyn James was something of a Welsh renaissance man

With a passion for the culture and politics of his homeland, his never-dull career ranged from broadcasting to espionage – yes, espionage – not to mention his achievements on and off the rugby pitch, being the only coach to mastermind a series victory for the British and Irish Lions against the All Blacks.

The life story of this complex man comes to the Swansea stage this month when Torch Theatre’s new touring production Carwyn stops at Taliesin Arts Centre. It reunites playwright Owen Thomas with actor Gareth John Bale, who starred as Ray Gravell in the excellent Grav at the same venue in 2016, but this time out Bale takes up the role of director with Llanelli-born actor Simon Nehan, recently on our screens in The Pembrokeshire Murders, starring in the one-man play. 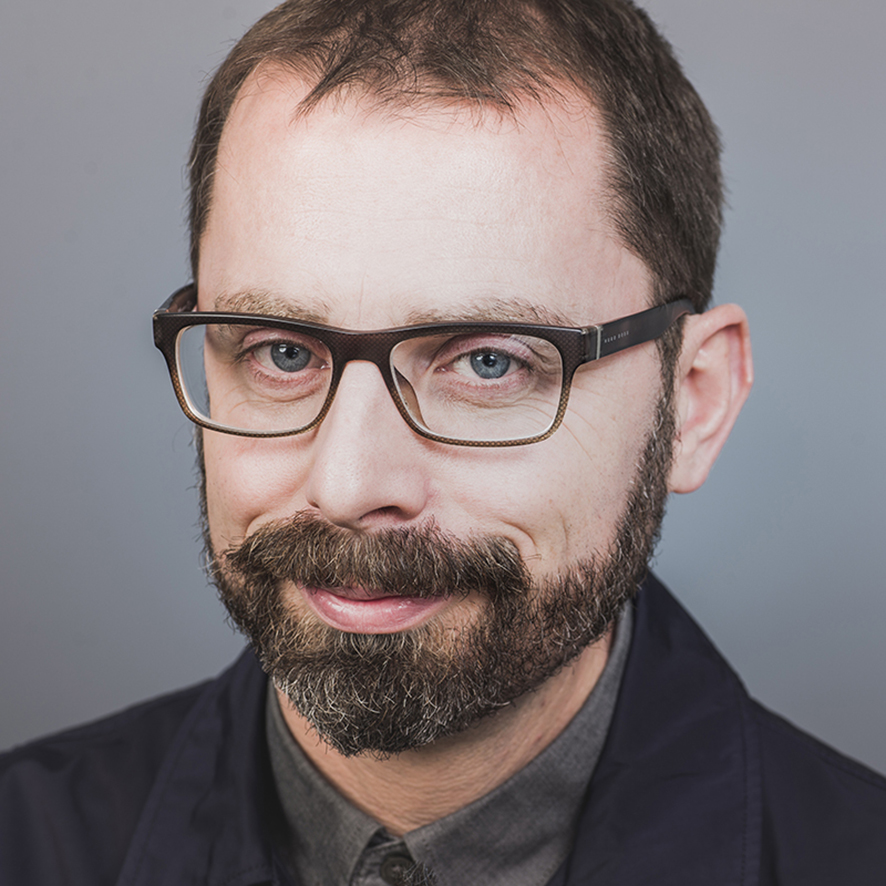 Ahead of the play’s arrival in Swansea, I caught up with playwright Owen Thomas (left) to find out more:

What can you tell us about the play, and where did the idea come from?

Carwyn is a one man show about the life of the late rugby coach, academic and personality, Carwyn James. It is set in the Amsterdam hotel room where Carwyn passed away and allows the man to look back over his life, reflecting on the highs and analysing the lows.

The idea came about from a meeting some years ago between Alun Gibbard, who wrote his autobiography, Peter Doran, and I. I was asked to read the book to see if I could the potential of a play within, and as soon as I turned the last page I knew it was a project I wanted to do. The play explores the many different facets to his life, the successes he enjoyed and the private battles he fought.

In many ways it is a story that everyone can empathise with – are we living the life we want to lead? Despite his huge success I became conscious during my research and writing that many people have forgotten Carwyn. He deserves remembering.

Carwyn James was a complex character, what were the challenges of trying to get inside the mind of man considered by many to be a Welsh legend?

Having your facts right is the key challenge so, as with Grav or other historical figures and events I’ve written about, research was key. Alun was an excellent source of knowledge, as were people who knew him. I read

every book I could and spoke to people who knew him in his different guises, his years as a coach, at the BBC, and as a young man. Because he has passed away it was impossible to interview the man himself, so careful research enables you to try to get his voice right and ensure that I am not putting words into his mouth. There has to be some theatricality – this is a play, not a Wikipedia entry – but there is a great responsibility to ensuring it is as truthful a portrayal as is possible. 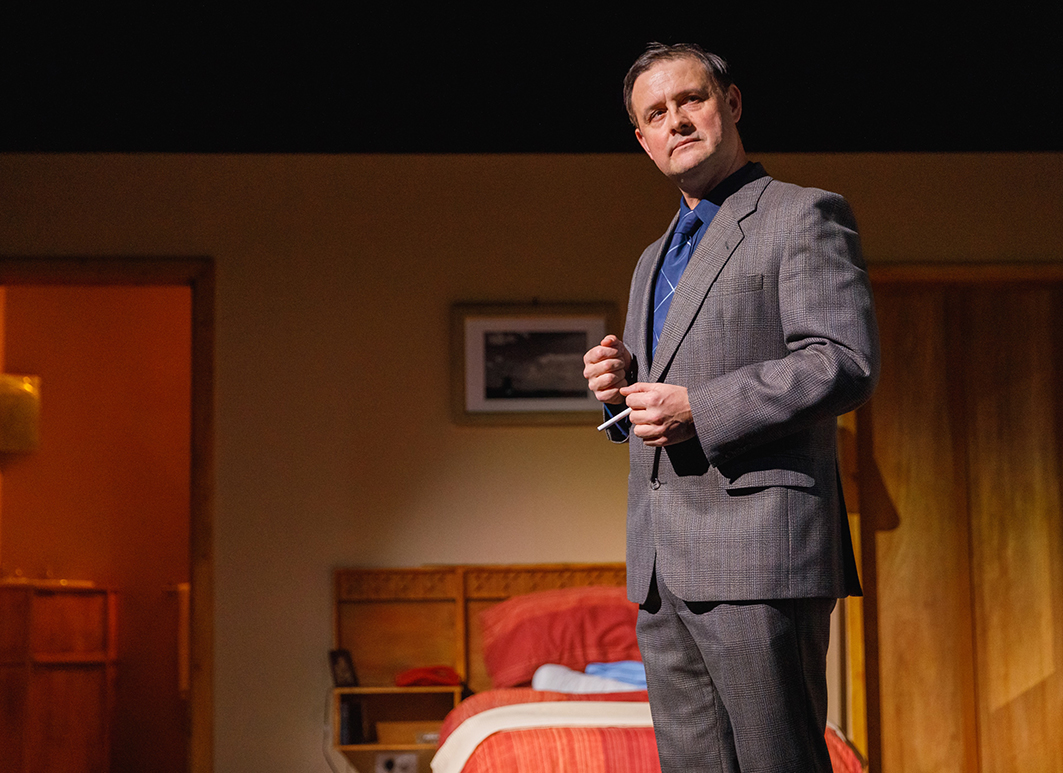 Did you have any input from his friends and family?

We had some brilliant meetings with players who played under him, including an amazing meeting in Llanelli with Roy Bergiers, Delme Thomas and Phil Bennett. They were generous with both their time and their reflections. To sit and listen to these legends of the game talking about what a significant figure he was in their own lives was very inspiring. I was also able to call on the knowledge of friends and collaborators such a T James Jones, and Gareth John Bale, the director, also spoke to a lot of people including Barry John, all who were able to throw some light on who Carwyn James really was.

For fans of Grav, how does this compare and how does it differ?

On the face of it Grav is a play about rugby, but underneath it is a play about fathers and sons. Carwyn, again, is a play ostensibly about rugby, but beneath it explores being truthful and endeavouring to live your best life. Carwyn and Grav are very different men, but both are dramatically fascinating in their own ways. I think with Carwyn James there was more of a tortured soul, and someone less comfortable in their own skin, but both men loved rugby and loved their home country. In Grav you had a towering central performance from Gareth John Bale, but in this production, he turns his skills towards directing, and in Simon Nehan we have a fantastic actor doing an amazing job.

Finally… why should people get off their sofas, turn off Netflix and go and watch a play?

All of us have been through the most harrowing two years we could imagine. Many of us have lost people and lost certain aspects of ourselves. Our willingness to go out and do the things we used to enjoy takes time to rebuild. But, in my opinion, it is important, as things reopen, that we try to get back to doing what we loved. If you enjoyed theatre, then the theatres are still there, and safely and responsibly they are waiting to welcome you back with open arms. That shared experience of watching a fantastic actor telling a story beautifully directed and designed is what inspires me to do what I do.

Carwyn will be at Taliesin Arts Centre, Swansea University, on Thursday, March 10, 7.30pm 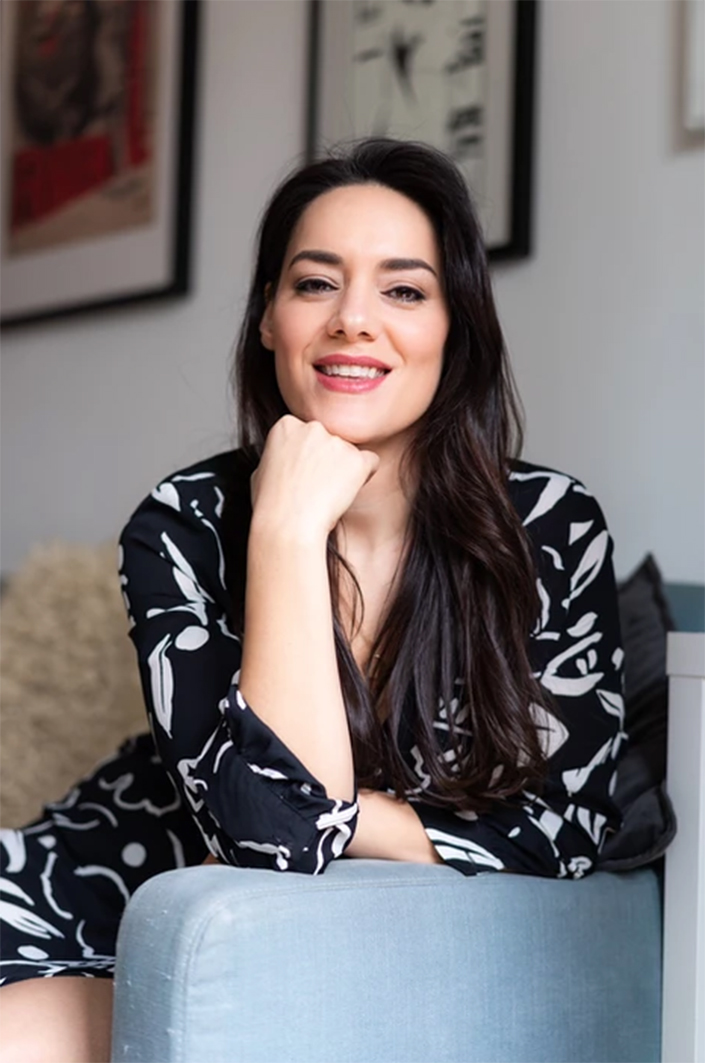 The WNO spring season is underway at Wales Millennium Centre, and along with a revival of Don Giovanni and the delayed Jenůfa, there will be another chance to catch the widely praised product-ion of Madame Butterfly that premiered during the autumn sea-son (you can read my review in the November issue of Bay). A story of unrequited love set to some of Puccini’s most glorious music, it sees Butterfly, a young bride abandoned and betrayed, struggle to come to terms with her situation. Supporting her throughout is her long-suffering servant and confidant Suzuki, who is performed by British mezzo soprano Kezia Bienek. I caught up with Kezia (pic left) ahead of the start of the season:

How great is it to be back on stage at Wales Millennium Centre with WNO?

It’s a truly wonderful feeling. The audiences at WMC are always so warm, I feel they really appreciate singing and music as it’s so important in Welsh culture. I’ve worked at WNO for a few years now and it’s become a second home in some ways, everyone on and off the stage are a joy to work with.

Madam Butterfly is a classic of the repertoire that will be familiar to many, but this production is a bold and powerful new take on a much-loved favourite. How would you describe it to fans of the more traditional productions?

I’m glad you find it bold and powerful. I’d say our production design is minimalist, beautiful, and illuminates important aspects of the story that traditional productions often lose. For example, the sterile, robotic nature of the opening scenes really shine a light on the transactional and inhumane act of buying a 15-year-old bride. There’s a dissonance between the sublimely beautiful music of Puccini and the uncomfortable truth that Butterfly has been trafficked. In this production you can closely see the relationships between the characters unfold and unravel, the tension of the situation is more palpable, our production has an intimacy and domesticity that elevates the despair in this classic opera.

What are the particular challenges of playing Suzuki in Madam Butterfly?

Suzuki is stressed! She’s running the house, feeding the child, trying to contain Butterfly and also living in poverty. She’s completely stuck in her situation and knows it’s never going to end well. Playing a role that requires a constant level of stress can take its toll physically, in rehearsal I kept finding that my shoulders were up, and I was holding lots of tension, so I’ve had to be mindful to keep checking in and relaxing whilst still looking like I’ve the posture of someone on the edge!

Do you have a favourite part in the opera, and why?

My favourite part has to be when Butterfly and Suzuki hear the cannon from the port and they see that it’s an American ship.

For a short moment these young girls have a burst of energy and excitement, they can abandon the weight of responsibility and act their age. They dress up, dance, decorate the house, put on make-up and do each other’s hair. And then they wait and eventually fall asleep.

Finally, many people will have been watching opera remotely during the pandemic and, in some cases, might not have been to a live show in more than two years. Why is Madam Butterfly the perfect production to return to the theatre for?

There’s nothing like live opera. The sound of the orchestra tuning, a buzz and then a hush in the auditorium as the lights go down. We’re all there together sharing a unique experience that will only be created that night. Puccini’s music is undeniably moving and I can guarantee you’ll feel enriched by hearing the magnificent WNO orchestra in this opera. There’s also some really, really good singing.

There will also be a chance to catch some operatic stars of the future on Sunday, March 6, when the Young Artists of the National Opera Studio return to the venue with Anarchy at the Opera. The semi-staged production will explore the concept of absurdism in an anarchic show of off-the-wall operatic numbers ranging from Les Mamelles de Tirésias to Alcina and Cheryomushki to Le Roi Carotte.