A spokesperson at GEM said: “Around six motorcyclists are killed and another 115 seriously injured every day in collisions every week (Government figures from 2020). One of the most common contributory factors remains the observation error which some years ago picked up the nickname ‘SMIDSY’ (sorry mate, I didn’t see you).“Experts point out that as drivers we’re not very good at identifying motorcyclists because they occupy such a small part of our field of vision. What’s more, if we’re not expecting to see one, then the chance of spotting one coming towards us is further reduced, and the risk of a collision is greatly increased. 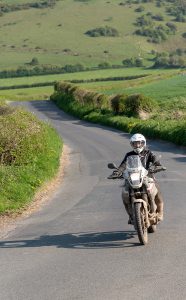 “As Spring arrives and the weather improves, many roads will become busier with weekend riders, so let’s make a point of looking out for them. In doing so, we will be greatly reducing risk, and contributing to safer journeys for everyone.

“So before pulling out of junctions, look carefully all around. Make a specific check for motorcyclists coming towards you. They’re not always easy to spot – but if you’re expecting them to be there, then you’re far more likely to see them in good time… and prevent a potentially serious collision.”

(Almost) never has so much money been paid for so little car: Car & Classic’s auction of second-most expensive Peel P50 in the UK

This Peel P50, recently sold for £111,000. Believed to be the second-highest price paid at a British auction for the model – is also said to have a wild past: used in a promotional stunt going all the way to the top of the Blackpool Tower, it may be the earliest model ever made, as a pre-production example sporting a lower fitment of the windscreen, early Lucas sidelights, a cream steering wheel and no rear roll bar. No other Peel has the same features. 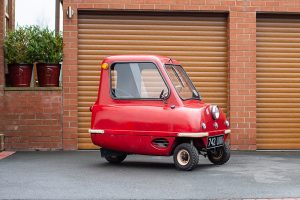 Capable of 38mph and with a range of 100 miles per gallon, the 59kg car has no onboard instruments or odometer, nor a reverse gear, relying on being lifted and turned into the desired direction by the driver. Its compact and cheeky looks make it a striking choice as a city car. Partly because of its glamorous history and totally unique features as well as its rarity as a model, the Peel was the object of brisk bidding.

If small and economical (especially in the current climate) are important aspects of one’s personal quest for an unusual classic car, but that winning bid may have put the Peel firmly out of reach for most, then an alternative was offered by Car & Classic at the same time as the Dragon Red P50: the bright yellow 1973 Reliant Supervan, with a top speed nearly twice as high, it sold for a more compact £6,100.