This month Liz Hinds considers the many Ukrainian refugees who will hopefully have arrived in Swansea, by the time we go to print, and reminds us of the need to love them and welcome them.

“Have we got any white paint?” I asked Husband

“To paint our windows in the event of a nuclear war.”

Husband patted me on the back and said, “Okay, dear.” 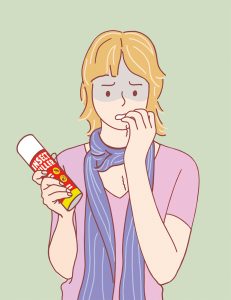 A few evenings earlier I’d been flicking through television programmes when I chanced upon the 24-hour live from Ukraine channel just as the reporter was talking about Putin’s nuclear threat. I quickly switched over, but the damage was done. I was in full panic mode!

I spoke to a friend and we discussed where we could take shelter and what we should put in our suitcases. Clean knickers obviously and a tooth-

brush, and treats for George, of course. It was a fairly light-hearted discussion but with a core of real fear. Then I thought, perhaps I should begin saving plastic bottles and filling them with fresh drinking water. Which isn’t as bad as someone else I heard about who was planning to invest in a water filtration system and a solar generator, as well as stockpiling long-life food.

I vaguely remember the Cuban missile crisis, but I wasn’t old enough to understand how dangerous it was and how close the world came to annihilation. I am now, and I don’t like it. I also remember the government sending a leaflet to every household in Britain telling us what to do in the case of nuclear war. Their advice included painting your windows white — hence the need to stock up – and finding a solid wooden table under which to hide. On that premise I’m thinking our dining-room would be the safest place. So, with table, painted windows, oh and insect spray, we will definitely survive!

I also recall something about a twenty-minute warning. That would just be enough time for my two local bits of family to rush here because it’s not instant death that frightens me but the thought of not having all my children safely gathered in – or even knowing if they were alive, in the case of the Italian branch. Well, that and the very idea of trying to survive in a post-nuclear world.

But while my imagination is running riot with “what if’s” there are people in Ukraine in very real danger. Millions are fleeing for their lives, leaving all that is familiar and safe: homes, jobs, and families even as husbands and sons stay to defend their land against the invader.

I cannot begin to understand how they are coping. I can sympathise, and try to empathise, but it is so far removed from any of my experiences in life that to truly comprehend is beyond me.

Appeals have gone out for medical and baby supplies and the public has responded generous-ly, but sadly it seems that those in authority, with real power to help, are less enthusiastic. I noticed that the Prime Minister and other members of parliament gave a standing ovation to the Ukrainian Ambassador who was in the Public Gallery at the Houses of Commons. I can’t help but remember how the Prime Minister also clapped for nurses . . .

At the time of writing, in early March, the government’s first response to Ukrainian refugees has been less than welcoming. Bowing to public pressure it has relaxed some visa rules and I hope by the time you read this that compassion will have prevailed.

Here in Swansea we have a history of being welcoming. In 2010 we became the second city in the UK, and the first in Wales, to become a recognised City of Sanctuary, part of a national movement committed to building a culture of hospitality and welcome.

And we sometimes forget that the earliest part of Jesus’ life was spent as a refugee. He and his family had to flee Bethlehem to escape from Herod’s soldiers who had been ordered to kill all baby boys aged two or under. The family settled in Egypt until it was safe to return to Nazareth. I wonder, were they welcomed or spat at in the streets? And how many other families fled to escape this particular form of genocide?

Jesus makes his views about foreigners very clear when he tells the story of the Good Samaritan. In that the neighbour/enemy turns out to be the good guy, and the moral of the story is “Love your neighbour” which includes your enemies.

That radical command was foreshadowed in God’s instructions to Moses. “When a foreigner lives with you in your land, don’t take advantage of him. Treat the foreigner the same as a native. Love him like one of your own.”

There’s no them and us to God. He will grieve as much over the wasted life of a Russian as he will over the tragic loss of a Ukrainian. Jesus sets the example for us to follow. Will we?