This month we take a tour of Wales’s castles, revisit our best local myths and legends, find out about our connection to the exploration of Antarctica, uncover the biggest media scandals in science, and look forward to a day when nuclear fusion will power the world. 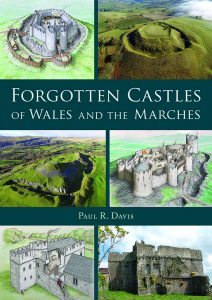 Wales has an astonishing legacy of castle sites, says Paul R Davis in the introduction to his latest book Forgotten Castles of Wales and the Marches. According to the author, who is an expert on our medieval architecture, there are upwards of 600 castle sites dotted around, with some 200 of these ‘major stone edifices whose longevity is a tribute to the skills of the original builders’. Thanks to these early masons, the ‘Land of our fathers’ is one in which we can actually see how our forefathers lived. 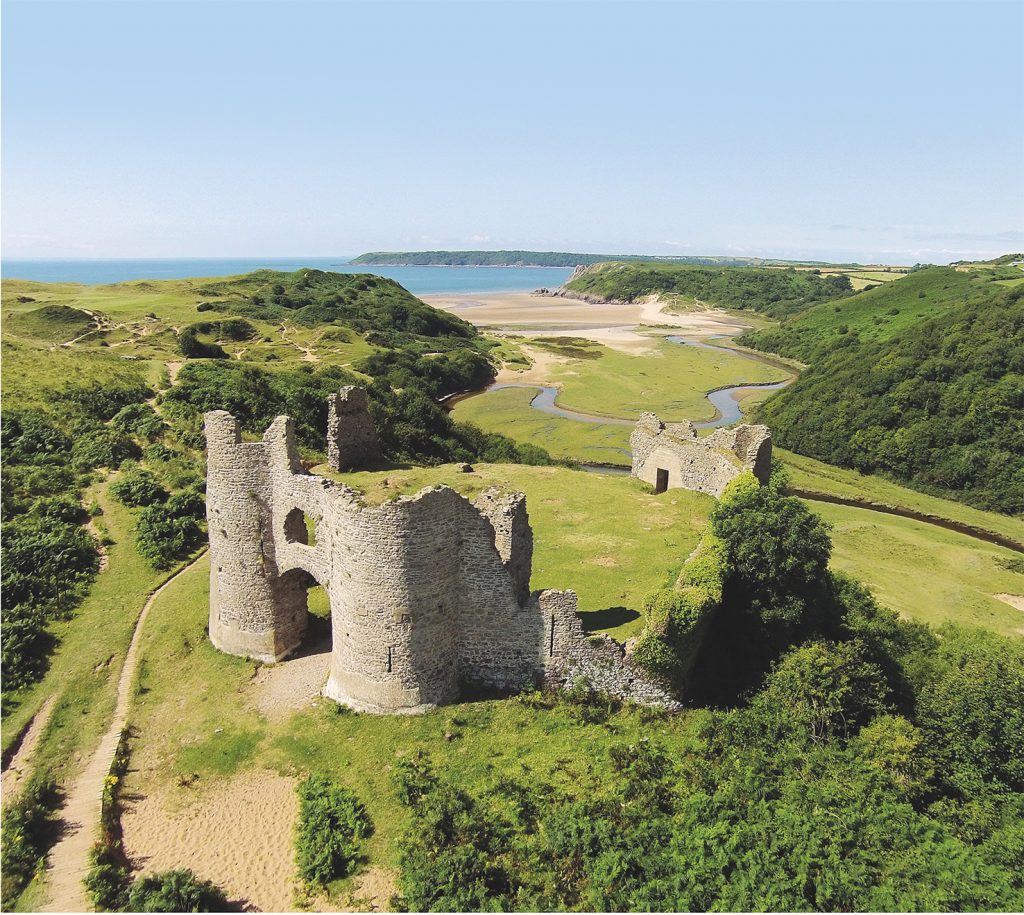 There is something wistful and romantic, he acknowledges, about these ivy-clad ruins that sets travellers and poets, archaeologists and artists into raptures over a past that somehow seems less complicated, less modern when seen through a lens clouded by centuries of slow and pleasant decay. These ruins are now picturesque statements about our distant past. 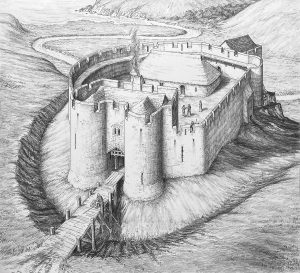 But it’s worth remembering that the great era of castle building stemmed from one not dissimilar to what we are seeing happening in Ukraine today. The end of the 11th century was an ugly time for Wales, with Norman invaders striking west from their military bases in the Marches, building castles in what Davis calls ‘unprecedented numbers’ to maintain their grip on the lands that they had seized by force. As we see on today’s rolling news, there’s nothing pretty in any of this. And yet, with the passing of dozens of generations, even the longest memories begin to fade and many of these sites have become picnic spots. And so, we should be thankful to Davis for painstakingly describing and telling the stories of these castles, some of which will be familiar to readers of Bay, because here in Swansea we’ve got more tumbled down fortifications than you could shake the proverbial stick at.

You’ve got to admire the way Davis has covered every inch of both Wales and the Marches to deliver his comprehensive account of the nation’s early architecture. Starting with West Wales and ending up in the North, he takes us on a tour of buildings that are little more than an obscure pile of old stones, to the fairy tale turrets of Castell Coch that can be seen from the M4 close to Cardiff. But my favourite – and I suspect it will be so for many Bay readers – is the lovely Pennard castle that overlooks Gower’s Threecliff Bay (making Davis one of the few writers to use the rare, correct spelling). Fantastic and endlessly interesting. 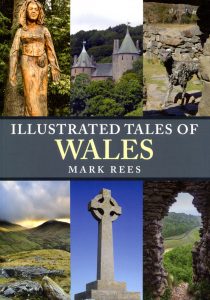 A red and white dragon fighting tooth and claw in the moonlit sky. Mischievous fairy folk luring unwary travellers deep into their under-ground lairs. A kind-hearted mermaid saving the lives of those in peril on the high seas. A charmed boy who transforms an otter into a bird to outrun a wicked witch. In Illustrated Tales of Wales, Bay’s very own contributor Mark Rees explores our fantastical myths, legends and folk stories that have long fired the imaginations of Welsh children of every age. From the medieval tales of the Mabinogion to those rooted in Arthurian legend, Rees retells tales both quirky and macabre that make up the threads of a rich tapestry of Welsh folklore. For those wondering how the author could go about illustrating such material, Rees has done a splendid job researching and, in some cases, taking his own photographs of the real places where the legends are said to have taken place, finding landscapes, memorials, buildings and signposts.

As Rees tells us, there’s a mysterious part of Wales that is home to mighty giants (and we’re not just talking about the national rugby team here) that live on the highest mountains, that do battle with King Arthur and the Knights of the Round Table. It is the land of the patron saints of hares and love. It has a water horse, known to give to those who mount it the ride of their lives, as well as the Christmas tradition of the horse-skulled visitor going door-to-door in the dead of night. It is also the home of the most profoundly tragic of all animal legends, that of Gelert the faithful hound that fought the wolf that attacked Prince Llewellyn the Great’s baby son. You can visit his grave at Beddgelert (‘Gelert’s grave’) in Gwynedd. 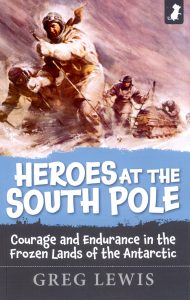 I don’t know how most people start their fascination with the Heroic Age of Antarctica Exploration, but for me it was on a school trip to Rhossili, when we were bundled into St Mary’s church to see the memorial to local man Edgar Evans, a member of Robert Falcon Scott’s Terra Nova expedition, who died on his way back from the South Pole. Ever since, I’ve been obsessed with Antarctica and have been lucky enough to go there twice. So, it was with the greatest of pleasure that I picked up Heroes at the South Pole, a children’s book that not only tells Evans’s tale, but also makes another Welsh connection from the same era: that of Perce Blackborow, a Newport boy who was a stowaway on Ernest Shackleton’s Endurance expedition (and yes, that is the same Endurance that has just been in the news, discovered at the bottom of the Weddell sea).

Written by Greg Lewis, the tales of these two adventurers is presented as a learning aid for kids who won’t yet be familiar with the sense of wonder that Antarctica once conjured up. The stories are told with such passion and flair – especially the part where Shackleton sets off from Elephant Island to fetch relief for his men by sailing across the Drake Passage in a lifeboat called the James Caird – that you could imagine a new generation of children becoming interested in the White Continent in the way I did all those years ago. Since then, I’ve read literally hundreds of books on Antarctica, but I’ve not enjoyed many of them as much as Heroes at the South Pole. 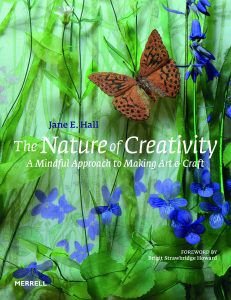 As we become increasingly aware of the power of nature to lift our spirits, so too are we be-coming more conscious of the role that mind-fulness can play in sparking our creativity. So says renowned fine artist and embroiderer Jane E. Hall in her captivating new book The Nature of Creativity. Subtitled ‘A mindful approach to making art and craft’, it is a sumptuously illustrated guide to how making things with natural ingredients can make you feel better: a sort of visual cookbook for the soul. Hall explains how as a child she loved playing outside and making things using natural materials, from daisy chains to petal-based perfumes. Now, as a successful artist, she still finds happiness and inspiration in connecting with nature, and in her latest book she encourages readers to get in tune with the beauty of the natural world as a way of stimulating creativity. Hall begins by explaining how spending time in nature helps us to engage the senses and rediscover playfulness, before outlining her belief that we should embrace the process of making art rather than focusing on its final form. She shares the special spaces, both indoors and out, that allow her imagination to have free rein, and then presents ten creative ideas inspired by nature.

Her designs are works of art: mandalas of petals, leaves and shells, a purse of honesty seed pods, handmade birds’ nests, exquisitely embroidered butterflies, ‘woodland fairies’ composed of lichen-covered twigs and feathers, and much more. If The Nature of Creativity doesn’t unlock your inner artist and bring you peace and tranquillity, I’m afraid nothing will. 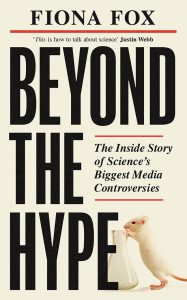 It was Winston Churchill who said that when it comes to listening to the experts, politicians should have scientists ‘on tap but not on top’. If living with covid has taught us anything, it is that ‘Number Ten’ can be selective when ‘following the science’. To the public on the receiving end of the attention-grabbing 24-hour news cycle, it seems politicians routinely prefer the hype that suits their non-scientific priorities, while ignoring the scientists begging to be listened to. When science and politics collide in public, people tend to get sacked.

If you don’t think this is true, turn to Fiona Fox’s superb Beyond the Hype, in which she outlines the downfall of one of the UK’s leading scientists David Nutt, who dared to suggest that taking ecstasy is statist-ically no more dangerous than horse riding: a comparison – to the scientific mind a legitimate one – that caused moral panic among newspaper editors and politicians, resulting in a P45 for Nutt.

opposing camps: whether it be about covid-19 or Fukushima, animal research or climate change, the real victim is balance. Fox is correct when she says that recently the status of science journalism has risen and that media editors have become more interested in portraying science accurately. And she is also spot on when she states that getting more scientists engaged in the reporting of science stories is a step in the right direction. But, as the sorry tale of David Nutt and the other media fiascos in Beyond the Hype demonstrate, bad reporting, political interference and the timidity of the science community have all allowed hysteria to flourish at the expense of fact. Powerful stuff. 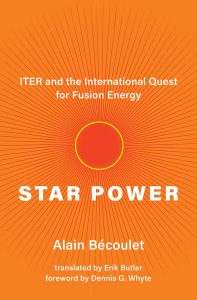 I magine a world where there is a clean, cheap and inexhaustible source of energy. That world isn’t one of science fiction, but of nuclear fusion. For decades, fusion – the process that makes stars shine – has been marginalised as a fringe area of scientific research. But as we enter what Alain Bécoulet describes in Star Power as the ‘third era’ of fusion energy, we see France’s International Thermonuclear Experimental Reactor (ITER) taking a ‘giant step’ towards a new type of power. Clearly, it’s big news and yet, as Bécoulet explains, most people don’t know the difference between nuclear fission and fusion. For the record, the fission process is currently being used to produce electricity in more than 400 operating reactors worldwide, while fusion is still very much at the blackboard stage. They are both nuclear reaction processes, says Bécoulet, but they are different on several specific levels. Unlike fission, fusion is intrinsically safe because it is not a chain reaction. It is also a very powerful reaction (even more so than fission), but there is no nu-clear waste produced by the reaction, nothing that needs to be processed or buried 500 metres below the surface of the earth. In this indispensable primer on the topic, Chief engineer at ITER, Bécoulet examines the history of fusion energy, explains the science and technology, as well as describing today’s massive scientific effort to bring fusion closer to commercial reality.