Welcome to stage 3 of the Gower Pilgrimage Way, an epic 50 mile hike linking 17 historic churches on the Gower Peninsula, the brainchild of David Pope, erstwhile Swansea resident and keen walker. This section starts in Llangennith and ends at St Cattwgs Church in Port Eynon, some eleven miles in length, visiting St Mary’s church in Rhossili and St David’s in Llanddewi on the way and passing some of the most stunning scenery in the whole of the UK. Don’t mind if I do. 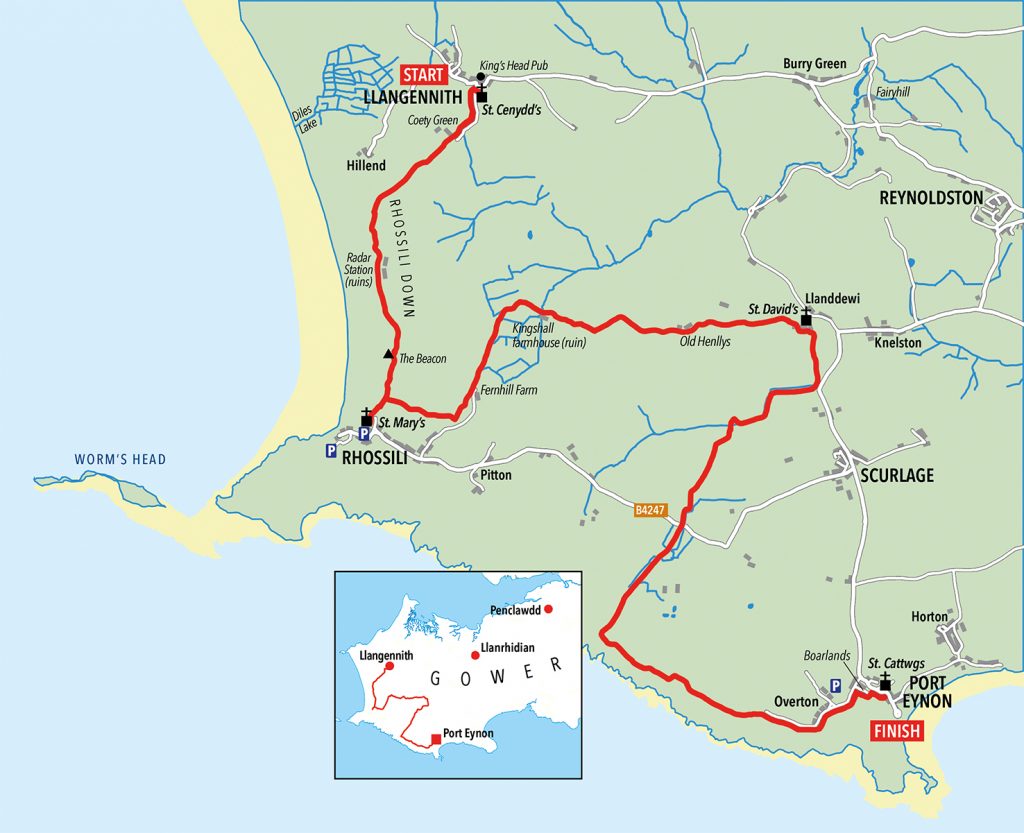 In last month’s walk, we fondly remembered another pilgrimage, albeit secular in nature, when as teenagers we made the annual camping trip to Llangennith. Most memorable in my experience was the summer of ‘76 and of course the Kings Head, from where we continue the walk, which was an integral part of the experience. Standing outside the pub on a balmy July evening enjoying a beer against the backdrop of the setting sun, the smell of coconut oil wafting through the summer air, talking about waxing our boards and hanging five, pretending we lived in Malibu and not Morriston and where L A meant Los Angeles and not Lower ‘Afod.

That blissful time is a memory etched in our minds and the pub in particular continues to be a ‘happy place’ for so many of our generation. But of course, we were completely oblivious to the history and significance of the building dominating the view just across the road, St Cenydds church. Thought to be originally built out of timber in the 6th century, it was burned to the ground by the invading Vikings only to be rebuilt over the centuries into the splendid building you see now. Inside there is a 10th century ornamented slab which is thought to have covered the grave of the founder of the church, St Cenydd. Llan is the word for the site of a church and/or its grounds and was often associated with the person, often saints, who founded it, hence the abundance of place names in Wales beginning with Llan. So, in this example it’s Llan Cenydd which morphed into, yes, you’ve got it, Llangennith.

From Llangennith churchyard then, turn left and left again down the road towards Coety Green. Go straight on where paths cross just before the farm. At the farm entrance, take the track slightly to the left, climbing up the hill to Rhossili Down. When you reach a fork in the paths, take the right hand path up to the top of the hill. At the next junction of paths, take the left hand fork and continue straight on up the hill at a crossing of bridleways. At the top of the hill, turn left at the marker sign and walk along the ridge of Rhossili Down, with cairns on the right hand side and views over the sea to Worms Head. It goes without saying that the views from here are rather handsome. A 360 degree panorama takes in the South Carmarthenshire and Pembrokeshire coastline and mainland Gower to the east. And good news, on a clear day, you can see the DVLA! 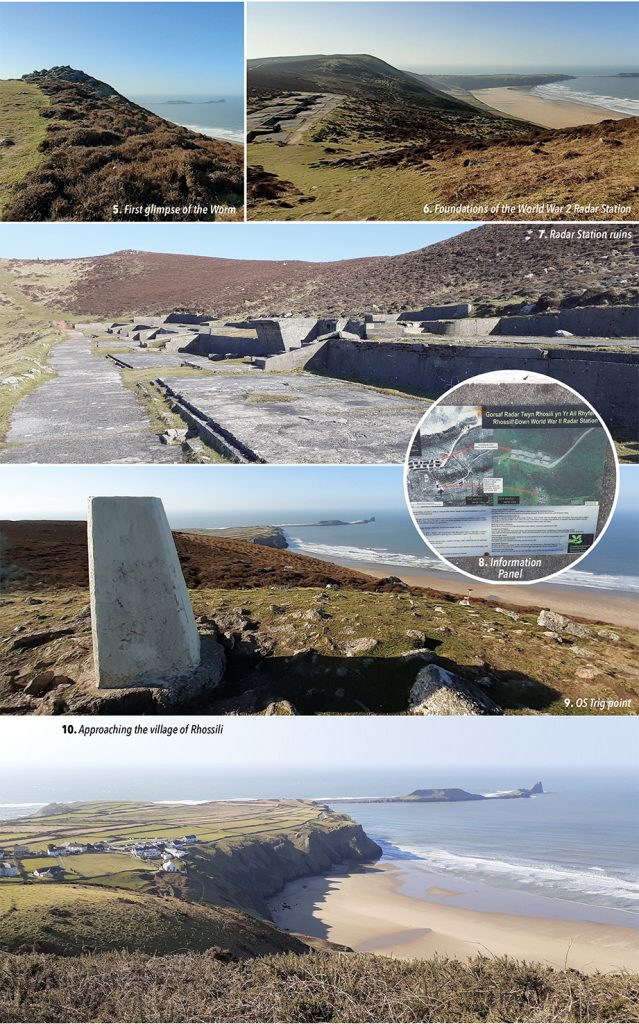 If you can picture the shape of Gower on a map, then you can really get a sense of the proportion of its actual size from this vantage point. It’s like being your own drone. And of course you’ve got the legendary view of the Worm and Rhossili Head just in front of you. Follow the path downhill, in front of the ruins of the World War 2 radar station, where there is a National Trust information panel. After the radar station, continue uphill to rejoin the main path. Continue on the track along the top of the hill. At a junction of paths, continue straight on, with the OS Triangulation Point on the right. (Although it’s worth just diverting to this point to savour more of the view). Continue straight on and down the hill to Rhossili village and church of St Mary’s. It’s one of the only churches that I found to be open and it’s worth calling in to see not only the quaint interior, but also the memorial to Middleton born Petty Office Edgar Evans, Captain Scott’s reliable workhorse who perished on that fateful expedition to the South Pole in February 1912. 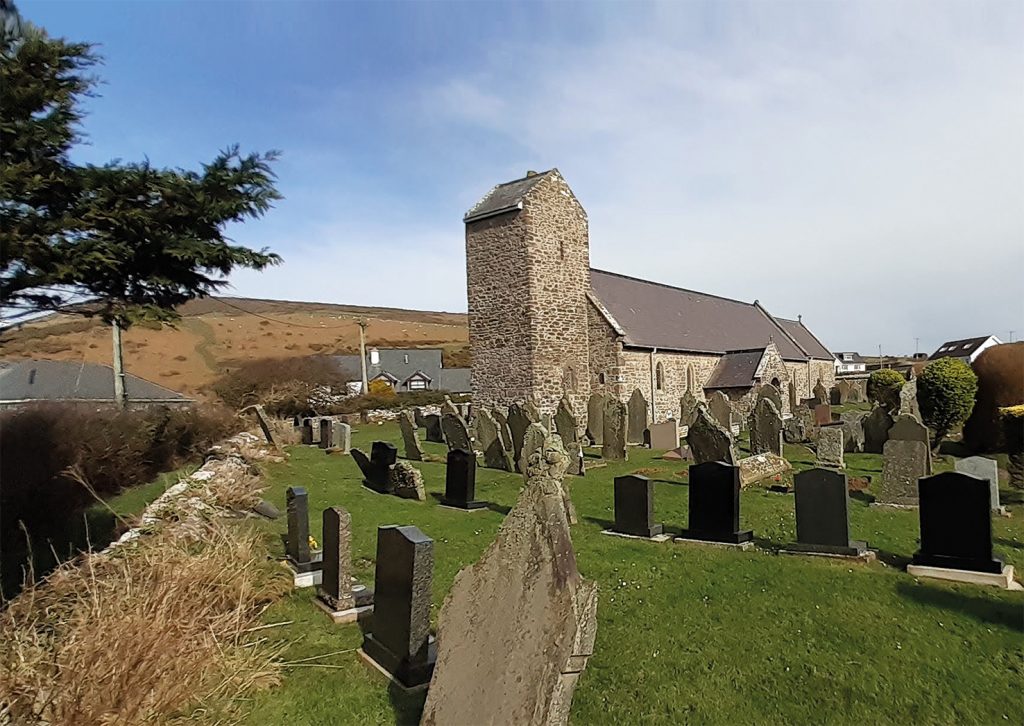 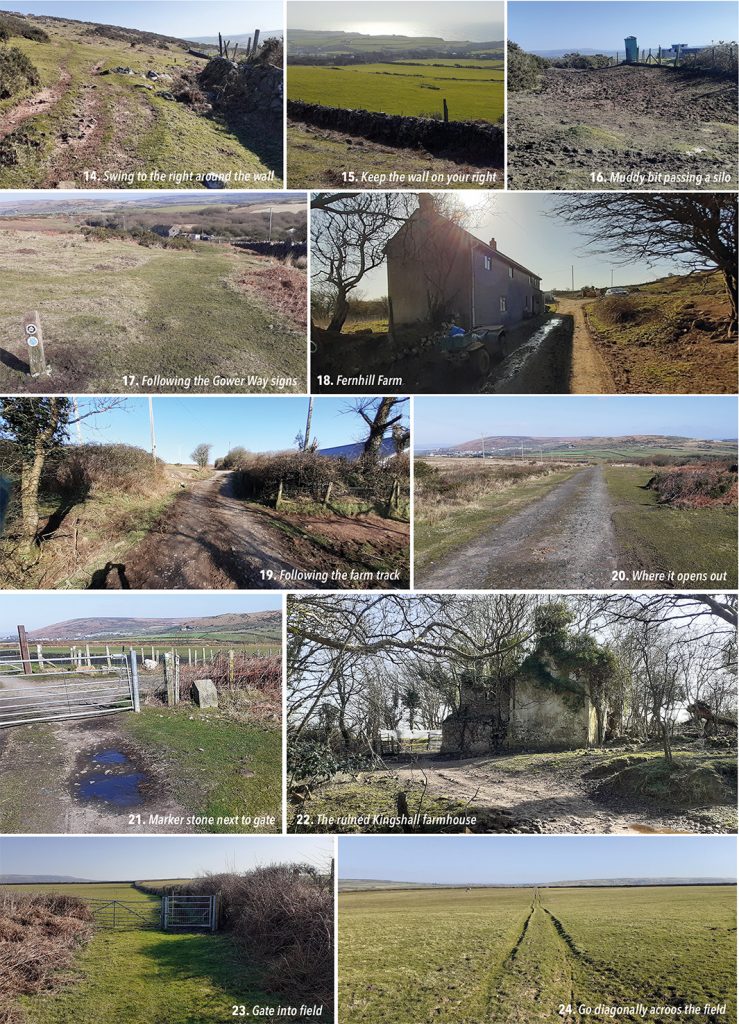 From Rhossili churchyard, re-trace your steps back up the hill to the right of the Rocket House following the Gower Way signs up the hill and swing to the right around the wall. Continue alongside the wall, passing to the left of a covered reservoir, and then follow the Gower Way sign past Fernhill Farm on the right and along the farm track. Go through the next gate, and turn right, where you will see a Gower Way marker stone. Follow the track past the ruined Kingshall farmhouse, until you go through a gate into a field. Go diagonally across the field to the opposite corner, then follow the track past Old Henlly’s Farmhouse, striking a very sad sight and showing signs that it was lived in not that long ago. The track continues to a gate, with New Henlly’s farm on the left. Go through the gate, with the Gower Way marker stone on the left after around half a mile, Llanddewi Church is on the left.

A curious place in that it’s a church without a village and architecturally odd too in that the chancel (the area around the altar) is slightly out of line with the nave (the central part of the church), prompting some to suggest it signifies Christ’s head leaning to the left on the cross, or to others just a dodgy surveyor. The directions from here are a little complicated so close attention is required. It can get a tad muddy too. On the day I did it, some of the gates were tied securely shut with string despite it being a legitimate right of way, an attempt I’d imagine by the farmer to prevent walkers from leaving them open. Fair enough. So be careful when getting your leg over. 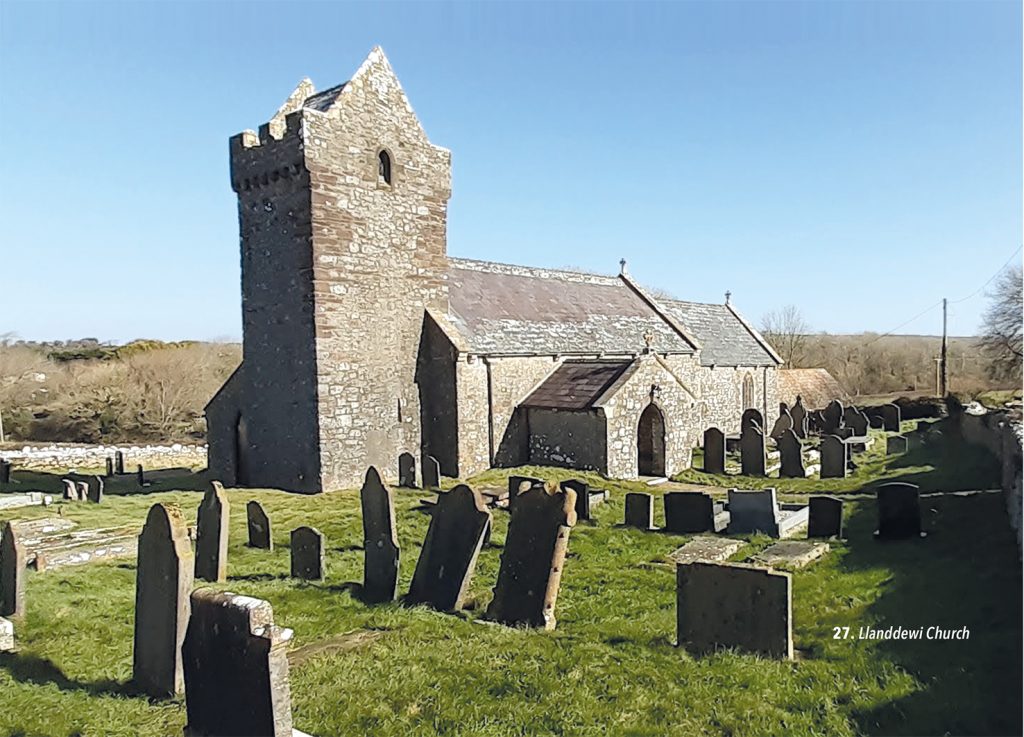 From Llanddewi churchyard, turn left along the track. At the left hand bend, where there is a Public Footpath sign and also a Gower Way marker stone, go over the stone stile, and take the footpath to the right behind the large barn, and then keeping the hedgerow on the right go ahead. Cross over a stile (which looks like a gate) and continue straight on through the field and through a gate at the far end. Walk down through some scrub and turn right along the farm track (which is very close to the road from Knelston to Scurlage). On reaching two farm gates next to each other, go through the left hand gate and go obliquely through the field, aiming for the houses that can be seen in the distance. Cross over a broken stile and go straight across the maize field heading towards a farmhouse covered in scaffolding. Turn left at the end of the field and follow the farm track past Newton Farmhouse on the left. Where the track divides, take the right hand branch and cross over the stile. Walk diagonally across the field towards a stile on the skyline (with no hedge on either side of the stile). 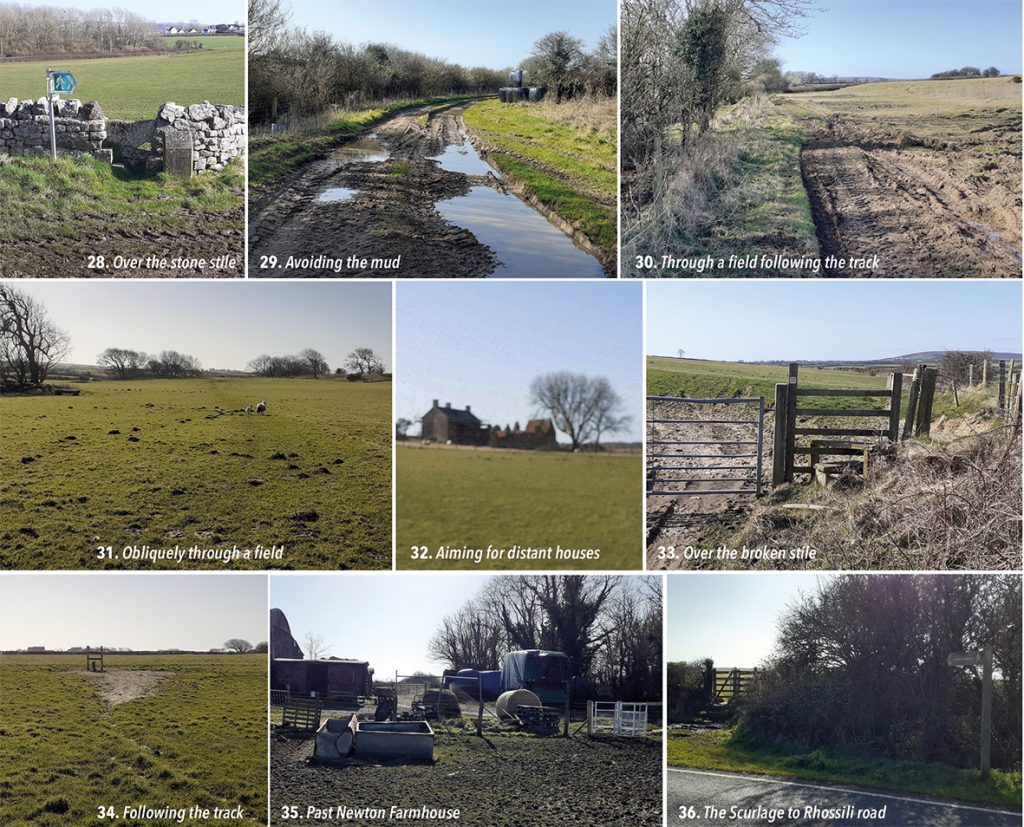 Cross the road with care, walk left for a few yards and then go straight on at the Public Footpath sign. Continue straight on this footpath, keeping the hedgerow on your right, through several gates until the sea comes into view and you reach a Wales Coast Path sign. The landscape changes dramatically now as you’ve reached the wild and untamed South Gower coast. Straight ahead is a sharp V-shaped valley leading down to the sea and through which you can access the famous Paviland cave. A walk for another day perhaps.

At the Wales Coast Path sign turn left and follow the path above the cliffs for around a mile, ignoring the Coast Path sign which turns sharply right downhill. At this point, continue straight on along the track to reach the village of Overton. Follow the track, which becomes a minor road, through Overton, and turn right into Boarlands, a cul-de-sac of modern bungalows. At the bottom of the cul-de-sac, look out for a footpath on the left, which leads to the road at Port Eynon. Take care joining the road, as there is no footpath at this point. 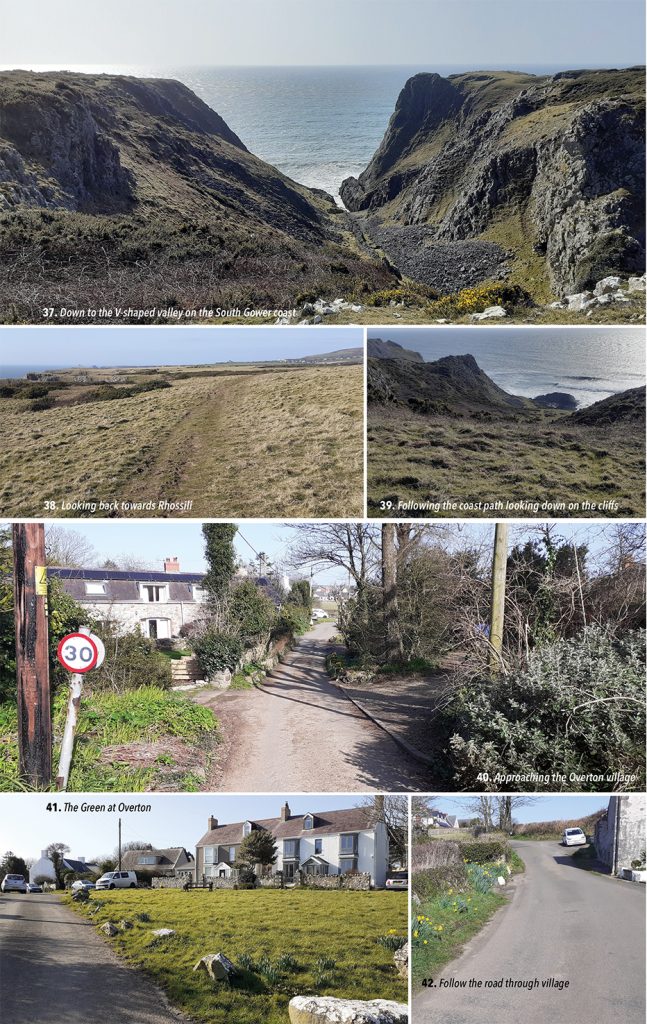 Turn right down the hill to reach Port Eynon with St Cattwgs Church on the left hand side at the bottom. So, there you go, another stage done and dusted. And it’s on to the next one from Port Eynon to Penmaen, a biggy at nearly 13 miles, so I’d get training if I were you! 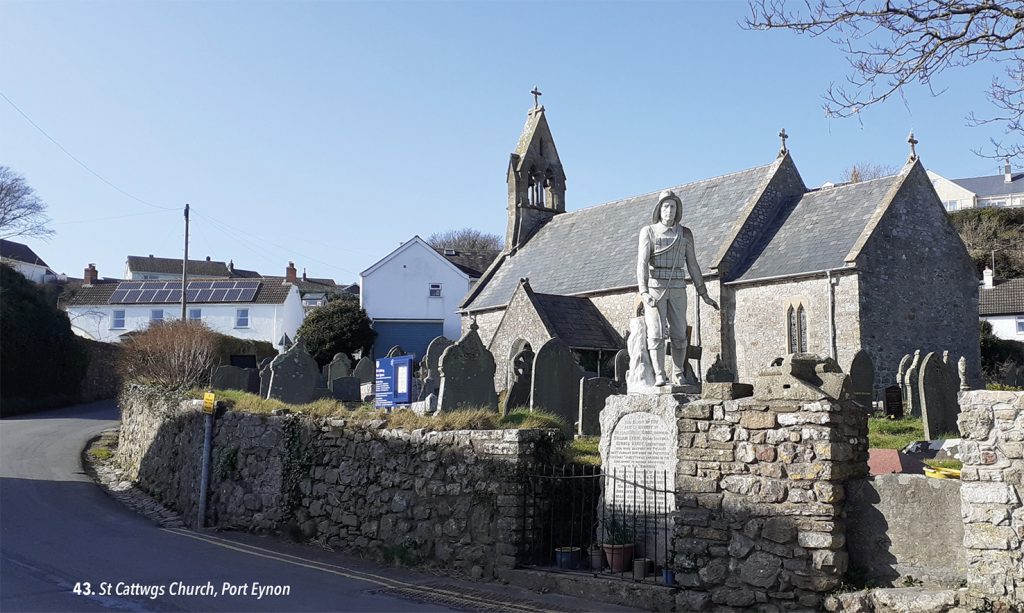 Refreshments: Shops and pubs in Rhossili and Port Eynon

XTC: In Loving Memory of a Name

Tavares: Heaven Must be Missing an Angel

Beach Boys: Do it Again

REM: It’s the End of the World as We Know it

Bette Midler: From a Distance

Beatles: Let it Be

For much more information on the walk please visit the website:-