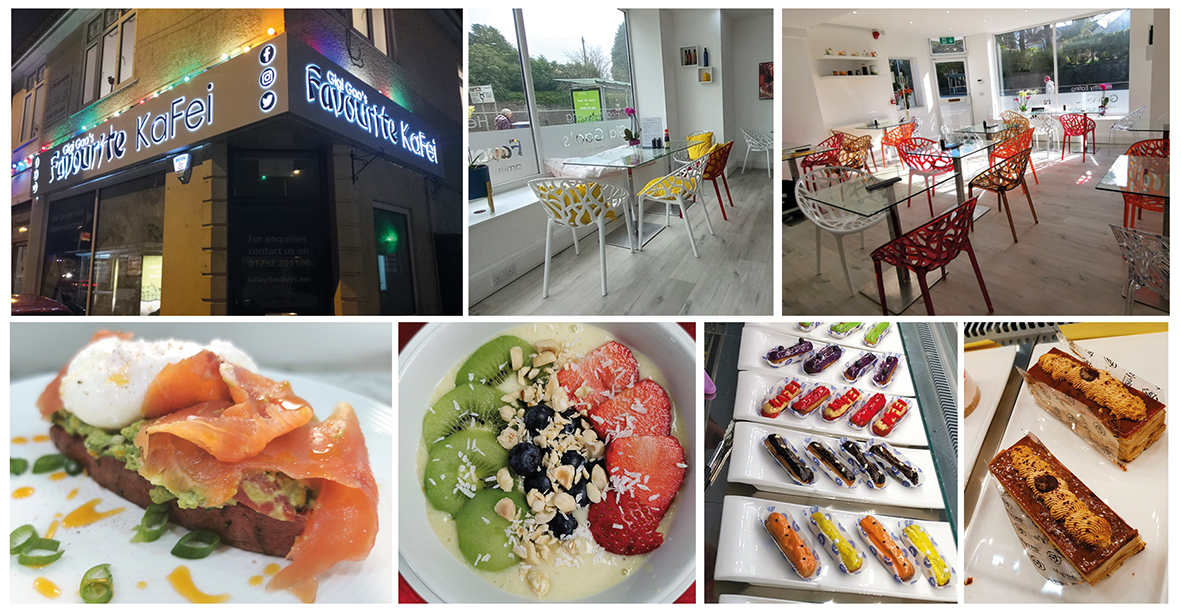 Coffee houses have been part of our culture since the 17th Century when coffee was introduced to Britain from the Middle East. Coffee is now the second most traded commodity after petroleum, which is hardly surprising if the number of coffee shops in every city, town and village is anything to go by.

But not all coffee shops are the same. I will always try to seek out an independent over a chain any day of the week, so I was delighted to hear that Gigi Gao had opened her Favourite KaFei in Killay, and called Liz Barry for an impromptu catch up.

The interior of KaFei is bright, airy and very colourful; the acrylic multi-coloured chairs were unexpectedly very comfortable. The artwork on the walls featured fruit and vegetables and complemented the menu, which was certainly much healthier than your usual café. But this is all part of Gigi’s philosophy – healthy food for a healthy body, something she has been promoting for many years at her Favourite Café Chinese restaurant in the Marina.

The KaFei menu has lots of options for gluten free dieters; Liz’s breakfast was served on a base of sweet potato instead of bread. I have no issues with gluten and my caprese croissant was filled with fresh tomato and mozzarella and pesto. At lunchtime you can feast on dim sum, duck wraps and lots of other Chinese dishes that you’d probably only see on the starters menu in a restaurant – making them perfect for light lunches and snacks. Not that it is all about healthy eating, Gigi knows that we all need a treat from time to time, and the pastries and desserts are certainly a treat. The filled éclairs were fabulous – one was chocolate and a more unusual lemon meringue one that was my favourite. 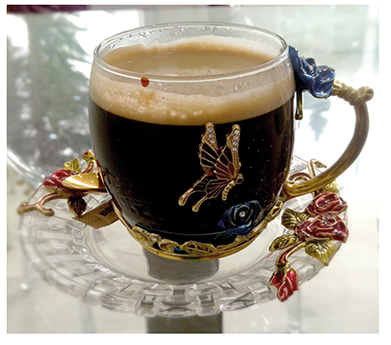 Gigi’s style is without doubt her own. She’s not afraid of colour or of bringing in exotic and decorative touches. I guarantee you will not find a more elaborate coffee cup than the one I drank my Americano from which featured butterflies and flowers. Gigi’s KaFei will definitely bring a smile to your face.

Open from 9 to 5 Monday to Saturday

One of the upsides of social media – and there are plenty of downsides – is how quickly word of new businesses opening can become common knowledge. Liz Barry posted on Facebook that she’d had food from a new Indian takeaway in Sketty Park, and that it had been really good. Never ones for needing an excuse to take a night off from cooking, we hot-footed it to Chilli and Chaat to see if it was as good as the word on the street.

The décor is quirky and contemporary –worlds away from the flock wallpaper of yesteryear. At the time of going to print Chilli and Chaat was open for takeaways only, but at some point in the future it will offer full restaurant service.

They title themselves as a Street Kitchen and the menu features street snacks and what I can only describe as fusion dishes such as a Naanwich, a cheesy naan stuffed with chicken tikka, onions and a spicy sauce folded over like a Panini. Mumbai meets Milan. One of my favourite vegetables is spinach so my go-to is anything saag – here it was a chicken tikka saag. The quality of the poultry was good; with bite sized pieces of juicy chicken in a rich spinach sauce.

My lovely carnivore devoured a Tandoori mixed grill and I was lucky to get a look in with a bite of the seekh kebab. A side order of deep fried spiced tiger prawns in breadcrumbs, along with chips and naan bread made for a veritable midweek feast. You can take a look at the menu by going to their website at chilliandchaat.co.uk.

I’m looking forward to eating in at some time soon, but until then I’ll be happy to pick up.

In 2004 I had a new kitchen fitted – it’s still going strong and I still love it. I chose duck egg blue accessories which were very much in-vogue at the time, and my dear mum bought me a toaster. She searched high and low to find an appliance to match my colour scheme and eventually came up trumps. When she gave it to me, she said that she hoped it would last a long time as it had been very expensive – she wasn’t kidding – it had cost her over £100. Mum passed away more than 10 years ago but the toaster is still going strong – or at least it was until last month when it was only toasting one one side.

But mum would be so pleased to know that because she bought a British made Dualit toaster, it can be repaired at home and that spare parts are easily obtainable from its factory in West Sussex.

Dualit was founded by a German born inventor Max Gort-Barten in 1945. His first commercial product was an electric heater called the Dual-Lite as it could deflect heat to two parts of a room, hence the company name Dualit. 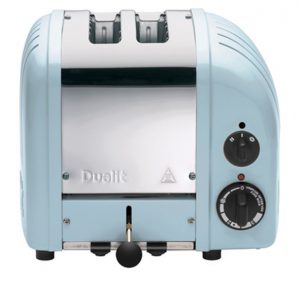 The Dualit Classic toaster, like mine has been described as a design icon and instead of having an automatic pop-up has a manual lever to lift the toast from the slots, and a mechanical timer.

Ordering the new elements was easy and not expensive – each element cost approximately £7. Full fitting instructions were included and I was soon able to make my breakfast toast again. Not only was I delighted to be able to repair my appliance instead of replacing it, but I know that my mum would be pleased that her present to me was still in daily use.