In this second article about the Georgians, we will be looking at the landscapes that inspired both artists and gardeners. The Georgians collected and placed high value on art, not just landscapes but portraits too. 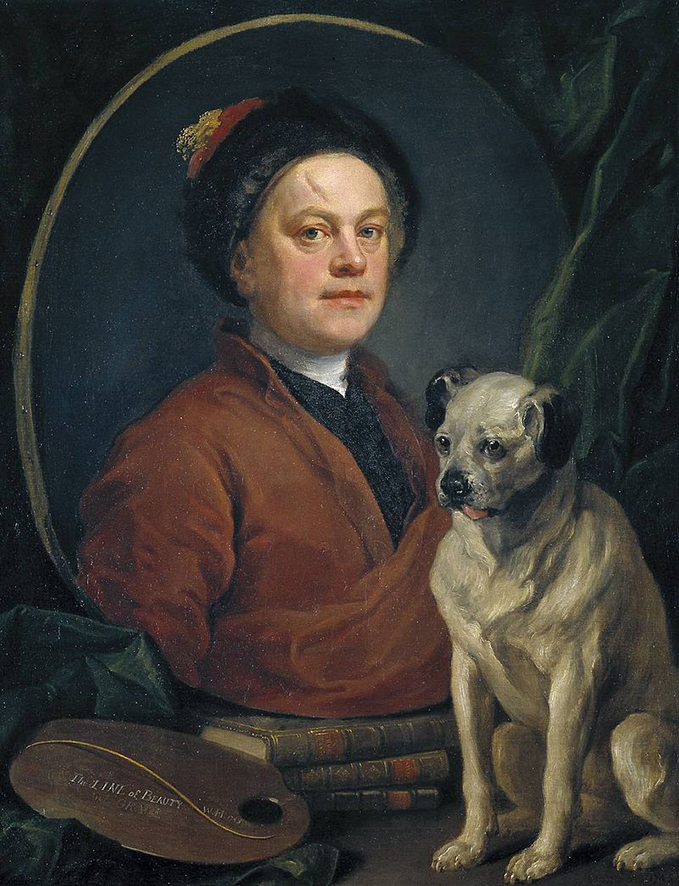 At the beginning of the Georgian Period, the style of art was classed as the age of “Scientific Reason” or better known as the age of “Enlightenment”. During the 1690s, London, became a magnet for people coming from the country and overseas. The first school of art was established by artist William Hogarth (right, self-portrait 1745), who captured the changes in London on canvas. Hogarth had established by 1735 the St Martin’s Lane Academy, which was the precursor to the Royal Academy of Arts. Other members included Hubert Gravelot, book illustrator; Francois Roubiliac, French sculptor; Richard Yeo, British coin and medal engraver; Isaac Ware, British architect and the young Thomas Gainsborough. The Academy also established a new style – Rococo, which lasted from the 1730s – 1760s. 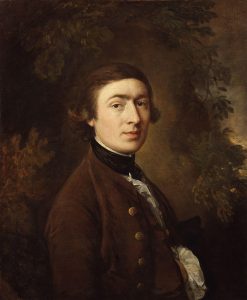 Thomas Gainsborough (left, self-portrait 1759) alongside his rival Sir Joshua Reynolds were considered two of the important British artists of the second half of the 18th century. Gainsborough’s works included both portraits and landscapes, including, Mr and Mrs Andrews, . The sitters, Mr and Mrs Andrews, were members of the landed gentry, and the landscape is that of Bulmer, Essex. Also, The Blue Boy, . The style of the painting is thought to have been in homage to the Belgian artist Anthony van Dyck. It was thought that the portrait was of Jonathan Buttall, the son of a wealthy hard-ware merchant, but this has never been proven and the more likely sitter is Gainsborough’s nephew Gainsborough Dupont. 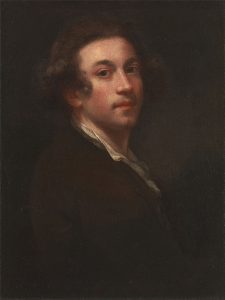 Meanwhile, Joshua Reynolds (right, self-portrait 1750), who was a member and the first President of the Royal Academy of Arts specialised in portraits. Sitters included Charles Lennox (below 1st left), 3rd Duke of Richmond, James (below 2nd left), 7th Earl of Lauderdale and Joseph Banks (below 3rd left), explorer and botanist.

With styles changing during the 18th century, one of the artists that was accepted in the Royal Academy by Reynolds, at the age of 14 was Joseph Mallord William Turner aka William Turner.

Turner  was a romantic painter and watercolourist and was known for his expressive colourisations, imaginative landscapes and other turbulent often violent marine paintings.

In 1834 Turner (above left) witnessed a fire at the House of Parliament and used it as the subject matter for two paintings, The Burning of the Houses of Lords (above centre) and Commons (above right) both of which are on display in galleries in the USA. 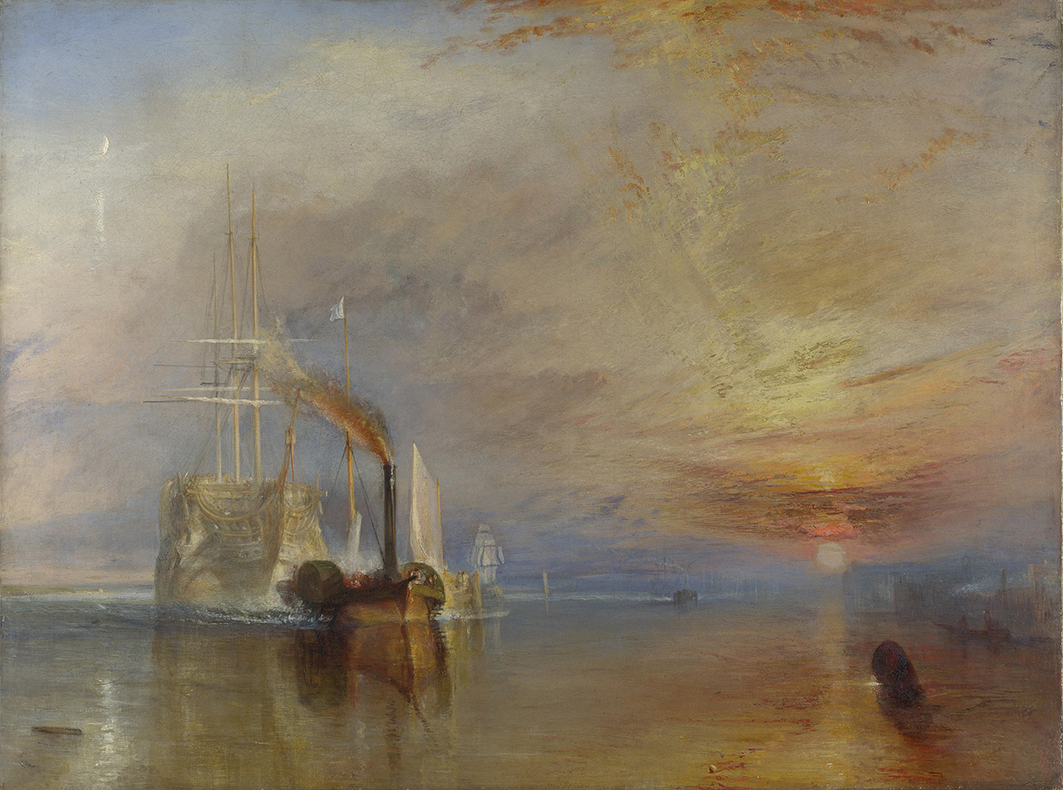 The colours and composition used in the paintings, may have influenced Turner’s The Fighting Temeraire (left, 1839). The Temeraire was one of the last second-rate ships that saw action during the Battle of Trafalgar and is depicted being towed up the Thames to Rotherhithe where it was broken up for scrap. Part of the image is used on the current £20 note. 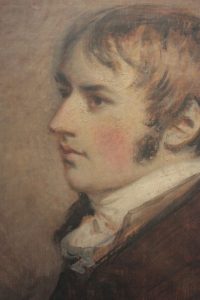 John Constable (right, pencil sketch by Daniel Gardner 1798) in contrast to Turner, was the oldest member of the Royal Academy when he was accepted aged 52. Constable was a romantic painter, who revolutionised the genre of landscape painting. His notable works included Wivenhoe Park; Dedham Vale  and The Hay Wain (below left to right). 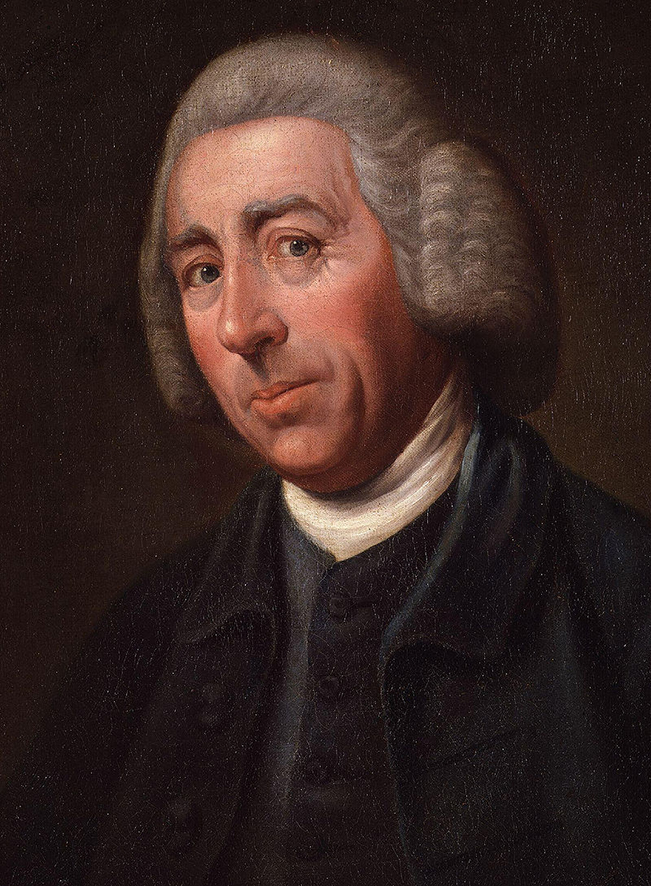 The “Landscape” Garden, which was emerging across England during the 18th century replaced the more symmetrical French style gardens of the late 17th century. Gardens during this period, tended to feature a lake, rolling lawns set against groves of trees and recreations of a classical temple. Two notable gardeners of the period were, William Kent and Lancelot “Capability” Brown (left). Kent, was the original landscape designer and the creator of the English Landscape System, changing the layout of gardens and estates. We’ll come back to William Kent in the next article about Georgian Architects. Meanwhile, Capability Brown, was a more hands-on gardener who designed over 170 parks around the country, the closest being Cardiff Castle.

Gainsborough’s The Blue Boy is on display at the National Gallery until 15 May 2022. 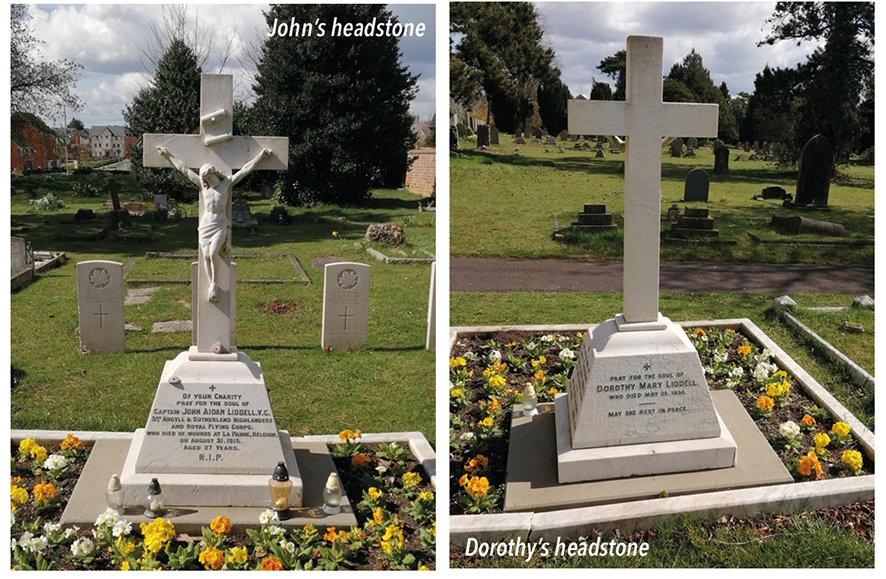 On a spontaneous trip to Basingstoke, I visited The Holy Ghost Cemetery, first opened in 1215, and situated in the heart of modern day Basingstoke.

The purpose of the visit was to photograph John Aidan Liddell VC’s headstone. John was awarded the Victoria Cross, the highest and most prestigious award of the British honours system, in 1915, whilst serving with the Royal Flying Corps. During a reconnaissance mission over Ostend-Bruges-Ghent, Belgium, the plane was raked from enemy fire. Injured, John who was losing height and consciousness succeeded to bring the plane and the observer back safely to the Allied Lines, for these actions he was awarded the VC. John had his leg amputated and sadly died a month later. Today, the VC is on display at the Lord Ashcroft Gallery in the Imperial War Museum. His body was repatriated to Basingstoke for burial. However, on the other side of the headstone is an inscription in memory to his sister, Dorothy Liddell. 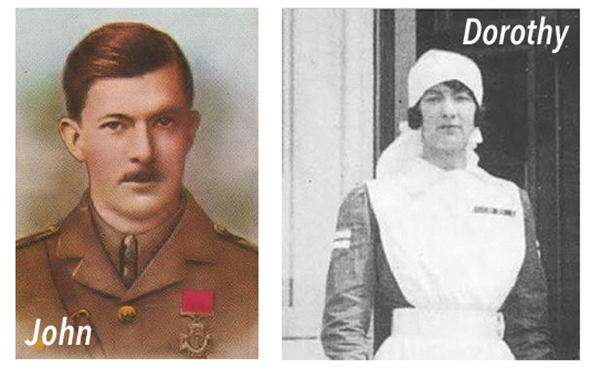 Dorothy, who like her brother, served during the First World War. Their family home, Sherfield Manor, Basingstoke was converted into a convalescent hospital which closed after John’s death. Dorothy went on to serve with the Red Cross at La Panne. For her service she was awarded the MBE.

Dorothy however, was a pioneering archaeologist who died in 1938, which led me to question how many female archaeologists were there and how many hailed from Wales?

I didn’t have to look very far for the answer, as Audrey Williams was the notable female Welsh archaeologist.

Audrey was born Audrey Davies in Dinas Powys in 1902. The family soon moved to Swansea where Audrey’s education was undertaken at Swansea Girl’s High School, later in 1920 – the same year that women had the right to undertake a degree – she studied English at Somerville College, Oxford.

Following her degree, Audrey taught at a local school. She married Percy Williams, who was interested in Swansea ceramics, Audrey then became involved with Swansea Museum and Royal Institute of South Wales, becoming the first female president. During this time Audrey worked with William F. Grimes – Assistant Keeper of Archaeology at the

National Museum of Wales. Audrey excavated three of the Iron Age Forts on the Gower Peninsula. During the 1941 to 44, Audrey was appointed the Inspector of Ancient Monuments by the Ministry of Works. After the Second World War, Audrey left Swansea and was appointed curator of Verulamium Museum, St. Albans. Later she worked with Grimes on several excavation sites in London that were bomb damaged. 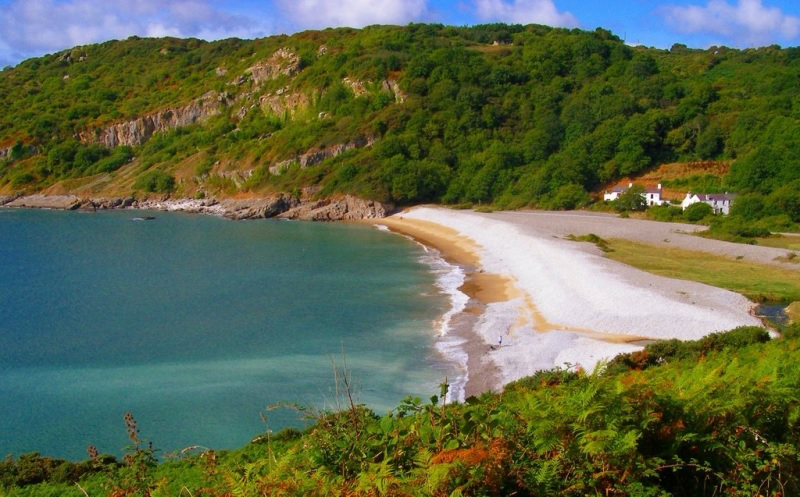 Audrey married three times, the aforementioned Percy, whom she divorced 1950. A second marriage to Illtyd Stockwood during 1952, again this marriage ended in divorce in 1956. Three years later, in 1959, William F. Grimes was husband number three.

The couple returned to Swansea in 1973, and spent their retirement living in Brynmill. Audrey died in 1978, and her ashes were scattered at Pwlldu Bay.

A final thought on Pwlldu Bay – during the Second World War under the cover of darkness a German U-boat surfaced, the crew landed to replenish fresh water and disappeared back into the darkness.