Following a two-year absence, the Hay Festival makes a welcome return to Wales’ “town of books” this month. Having switched to online-only during the pandemic – although it did make a brief return in November for a pre-Christmas Winter Weekend – the annual “festival of ideas” appears to be making up for lost time by cramming more than 500 events into a week-and-a-bit of talks, shows and gigs that will see hundreds of writers, thinkers, politicians, comedians, musicians and more descend on a field in Hay-on-Wye. And this year, it conveniently coincides with the extra-long bank holiday to mark the Queen’s Platinum Jubilee at the start of June, which makes it even easier for more people to pop along. 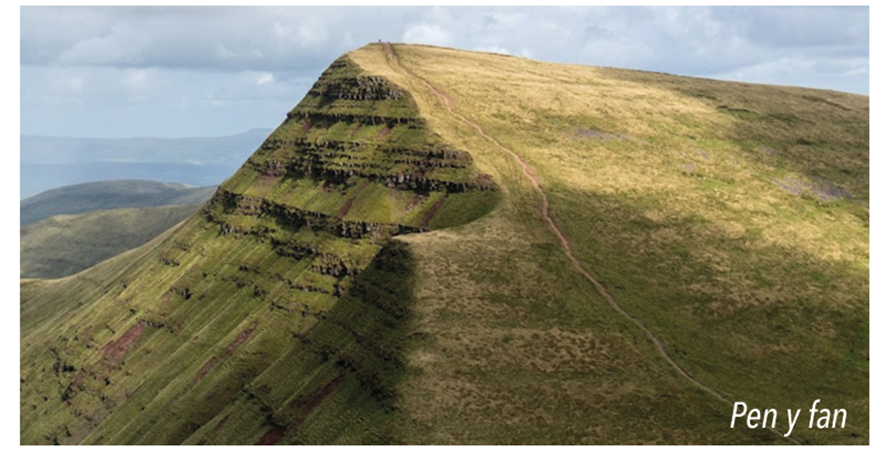 he Hay Festival is one of the few festivals where the travel can be an enjoyable part of the experience. Most people reading these words will be travelling from the west of Hay, which means the quickest route is a scenic drive over the sprawling Brecon Beacons. After crossing the vast panorama with little more than the occasional stray sheep for company, the road sweeps past the waters of Beacons Reservoir and the foot of Pen y Fan mountain, the highest peak in south Wales which the brave might attempt to conquer en route, and which is instantly recognisable thanks to the throngs of cars haphazardly parked beneath it. And from the Beacons, the next stop is…

Upon arrival there’s Hay-on-Wye itself, world famous for being home to more bookshops than you could ever hope to visit in a day. There’s always a great atmosphere in the town at festival time, and this year will be extra special because, for the first time in its 900-year-history, Hay Castle will be throwing open its doors to the public. Built in the twelfth century for William de Braose dynasty, who are also credited with rebuilding Oystermouth Castle in stone, it has more recently had a multi-million-pound restoration that I’m very much looking forward to exploring. If that wasn’t enough, as part of the Hay Festival there’ll be some outdoor theatre on its grounds, with Shakespeare’s Globe on Tour staging nine performances of the Bard’s Julius Caesar. And talking about the festival… 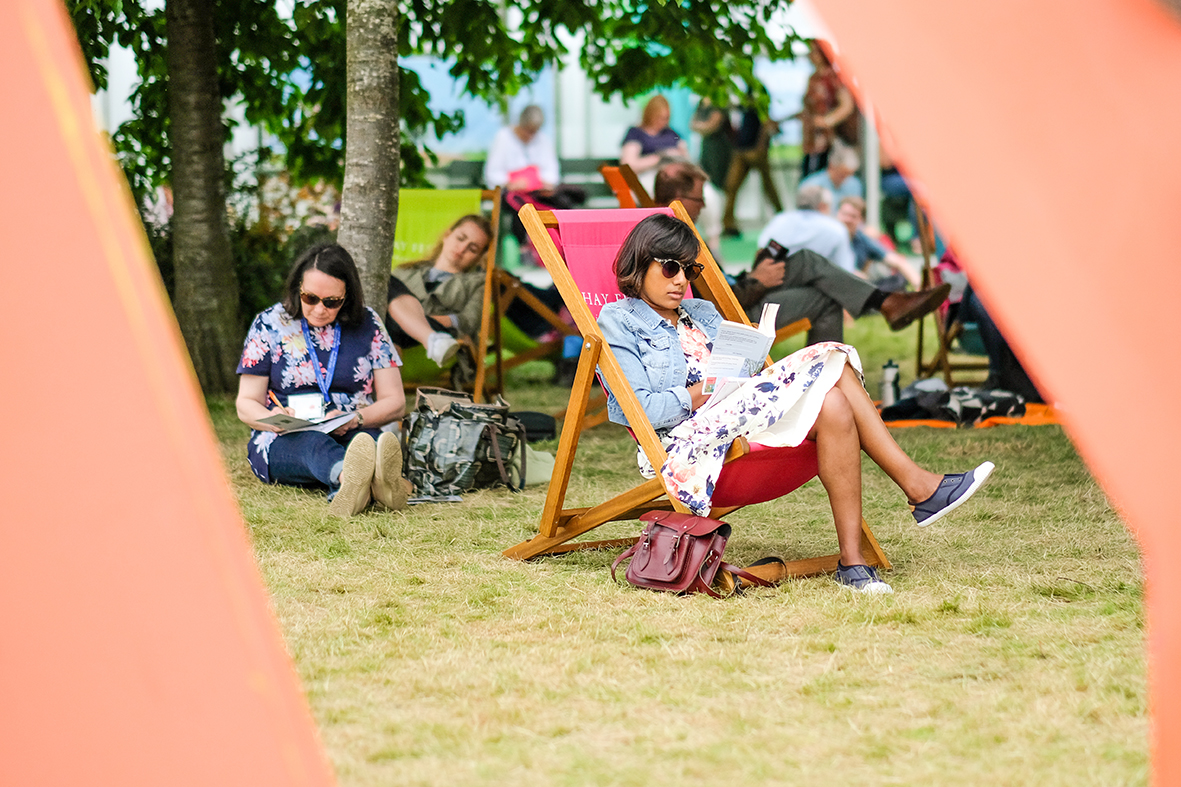 The main attraction is, of course, the festival itself, which is held in a field on the outskirts of the town. A series of giant marquees assembled especially for the occasion are connected by undercover walkways, beneath which you can find every-thing from a giant food hall to a bargain-filled second-hand bookshop – the ideal place to waste 30 minutes in between talks. For those new to the event, be warned that it can get incredibly busy at peak times, such as the weekends and bank holidays – of which we have an extra one this year – so if you just want a taste of the festival and aren’t too bothered about seeing a particular famous name, then Monday to Wednesday might be your best bet this year.

Either way, it’s always best to plan in advance because not only will you avoid the ticket queues, you’ll also avoid the disappointment of events selling out. You can check the schedule and book online before arriving, and for those driving its usually best to just park in the all-day official parking in the field next to the festival site. Yes, you could drive around instead and potentially find a cheaper alternative, but there’s a pretty good chance you’ll just end up wasting your time crawling around in circles only to find yourself back there anyway, plus the money raised for parking has, in previous years at least, been donated to charity, so it’s all for a good cause.

After all of that travelling and exploring the town, the best part is the hundreds of events taking place at the festival, and as always there’s plenty of headline-grabbing big names in attendance. They include the likes of acting royalty Minnie Driver – whose father, incident-ally, was born in Swansea – and Damian Lewis of Band of Brothers fame, and returning favourites Stephen Fry who, among other things, will be discuss-ing his personal ‘Odyssey’ through Greek mythology, and Sherlock star turned Marvel superhero Benedict Cumberbatch. The diverse line-up also offers talks from legendary Led Zeppelin guitarist Jimmy Page, furniture restorer Jay Blades, Scotland’s First Minister Nicola Sturgeon, and everyone’s favourite lockdown PE teacher, Joe Wicks. 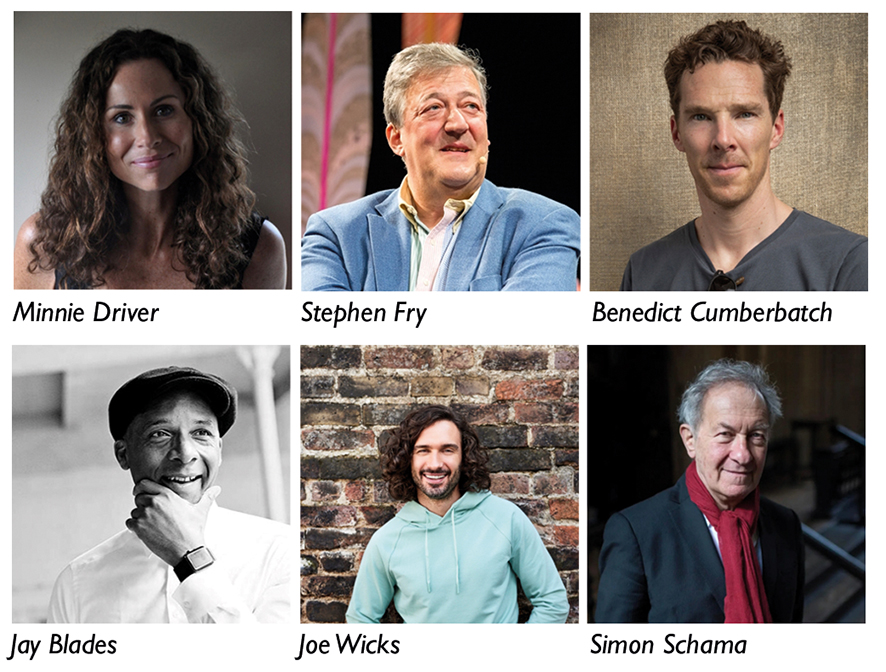 It’s worth remembering that one of the best things about Hay is discovering new voices, and some of my favourite events have come about by accident when I’ve found myself looking for something to fill a gap in my schedule. Two of my personal favourite speakers from years gone by are the historian and BBC regular Simon Schama and the philosopher A.C. Grayling and, not only are they both on the line-up once more this year, but they’ll be making multiple appearances, including one event together.

Finally, as a Welsh festival, there’ll be plenty of local representation, the highlight of which has to be a concert featuring the world’s finest bass-baritone Sir Bryn Terfel alongside Rebecca Evans, Trystan Llŷr Griffiths and Leah-Marian Jones accompanied by a chamber orchestra under the baton of Gareth Jones for a “sublime evening of Mozart, Handel, Vivaldi and haunting Welsh songs.” Another Welsh highlight is art historian Peter Lord who will be talking about Salem, a devilish icon of Welsh painting that will be also on display during the event.

Of course, there’s much more to Hay that I can include in these pages, and these are just my personal picks and highlights, and whatever your tastes and interests, with more than 500 events on offer there should be something for everyone. 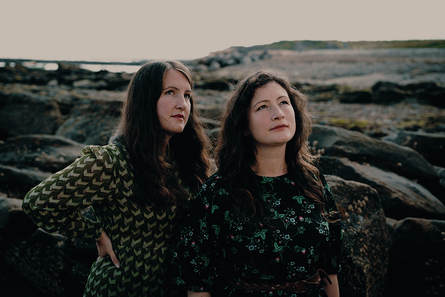 Folk favourites The Unthanks, best known for their haunting melodies that hark back to the traditional tunes from their native Tyneside, are back on the road to with their new album Sorrows Away. Along with the new album tracks we can also expect some old favourites including Magpie, The King Of Rome and Mount The Air, from the eleven-piece ensemble, and who knows – maybe they’ll treat us to what must now be their most widely heard work, the theme tune to Mackenzie Crook’s revival of Worzel Gummidge. 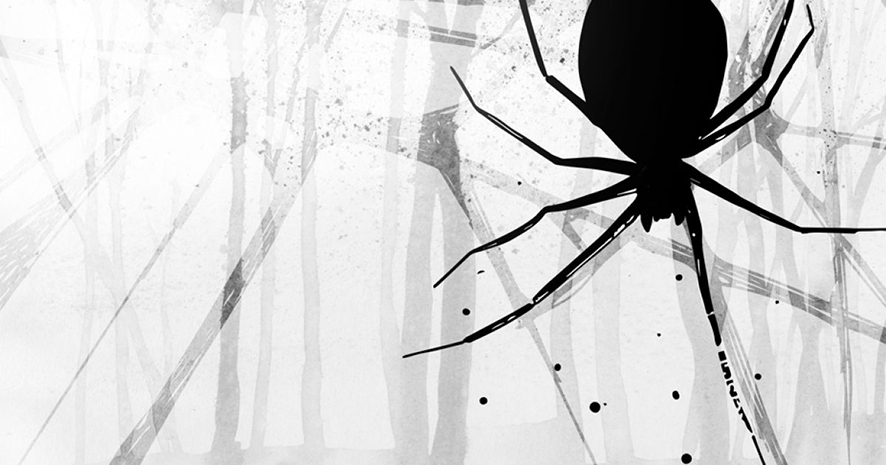 Wales Millennium Centre / Saturday, May 28 and Sunday, May 29

Welsh National Opera’s always-excellent WNO Youth Opera will join forces this month for The Black Spider, a “creepy, comic tale that takes us from the present day back to the Middle Ages.” Based on the book of the same name by Jeremias Gotthelf, this one-act opera was Judith Weir’s first work for the stage in 1985, and features every-thing you could want in a Gothic yarn – from a village cursed by a plague to a mysterious green man. It will also give us a chance to see some of the potential opera stars of the future and tide us over until the WNO return with Migrations next month.

Step inside the Glynn Vivian Art Gallery right now and you might be forgiven for thinking that you’ve accidently stumbled into a tropical room in Plantasia. The atrium has been vibrantly decked out in greens and foliage as part of Thinking Green, a land dialogues project from social practice artist Owen Griffiths that offers us a “space to imagine a garden as a radical space to grow, model and harvest ideas of social change.” Decked out with some agriculturally themed works from the gallery’s collection, along with a few from National Museum of Wales, Swansea Museum, and the all- 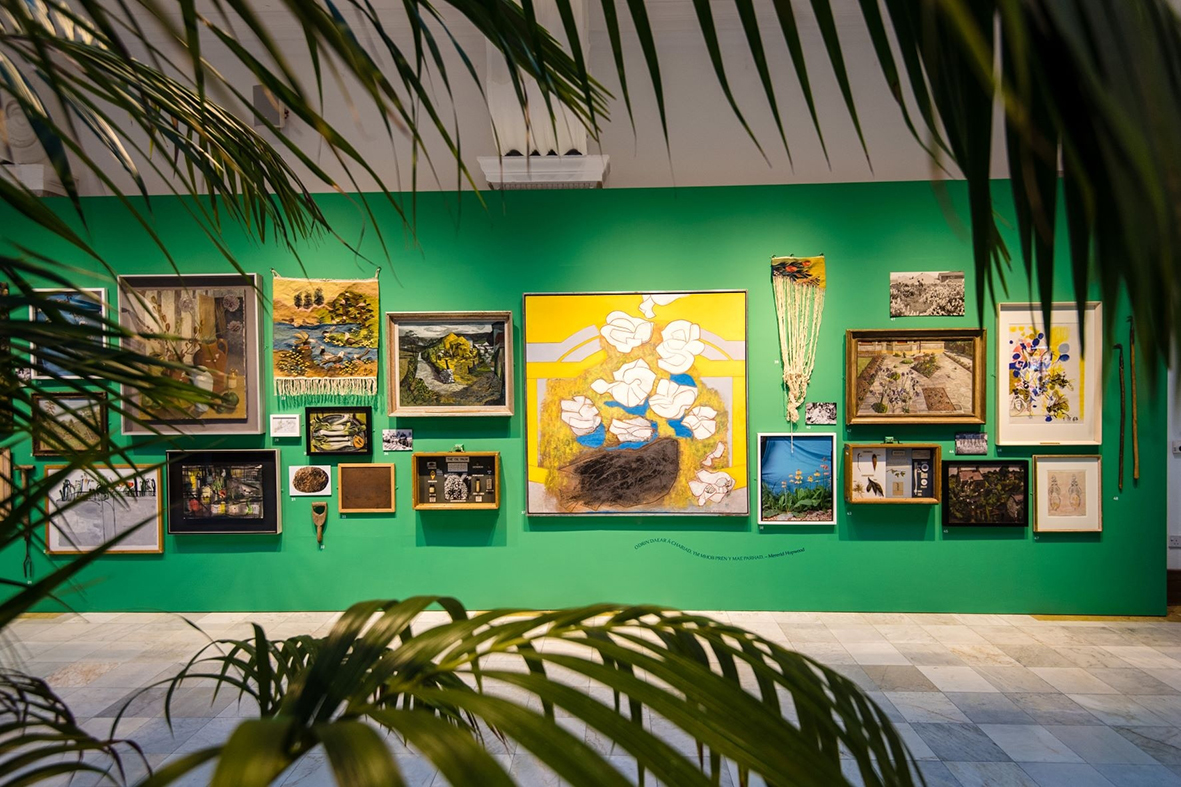 important plants from Swansea’s Botanical Gardens, it explores themes of botany and sustainability through such well-known artists as Stanley Spencer, David Nash, John Piper and Cedric Morris, with more folk-like additions including traditional instruments used to work the land and Victorian-style collections of insects and butterflies. It’s a thought-provoking assemblage, and one with long-term aims that hopes to change the face of the gallery’s garden space by encouraging ideas and reflection. 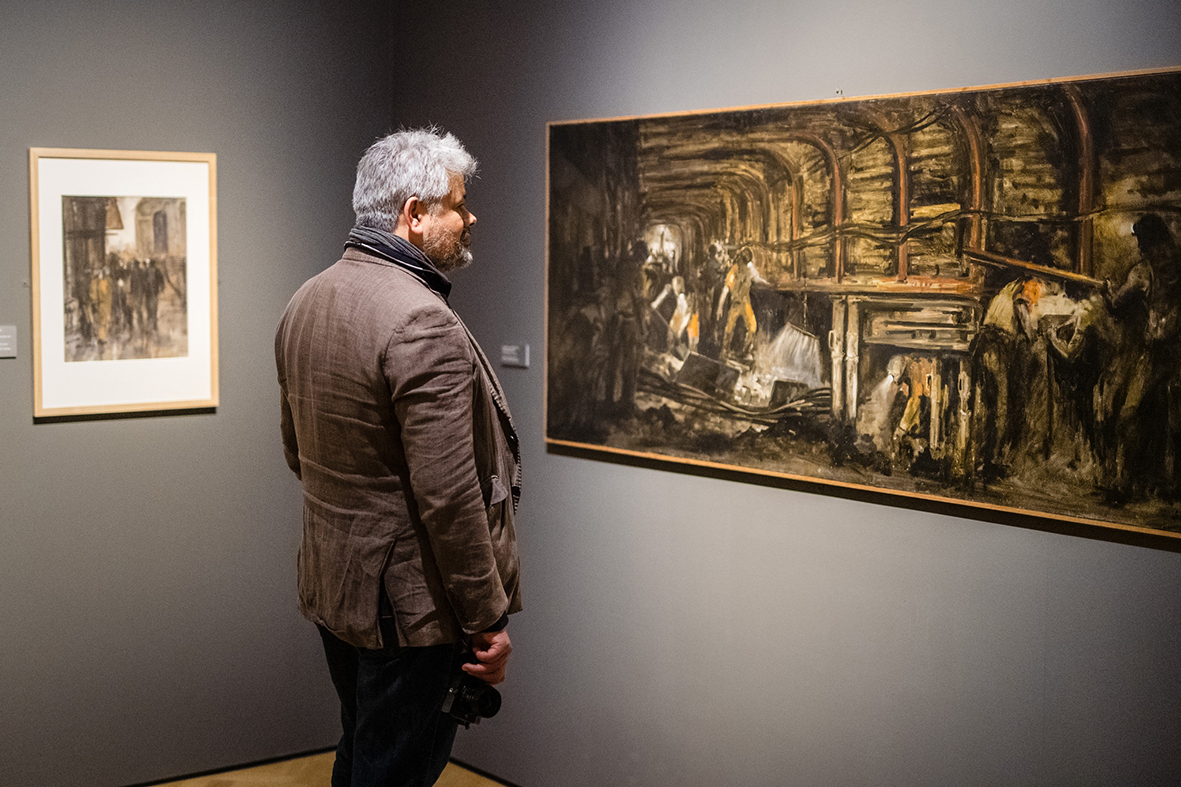 But it’s not the only new thought-provoking exhibition to open recently, and in room 3 Wales’s industrial heritage and, more specifically to the Swansea, the city’s copperworks and cockle pickers, is examined through the lens of decolonisation and its contribution to the British Empire in Art & Industry: Stories from South Wales. Curated by Zehra Jumabhoy, the latest project in the gallery’s “Conversations with the Collection” series revisits “Wales’s industrial past as well as trace its demise” through some sixty treasures from the archives, along with a few from fellow Swansea institutions the West Glamorgan Archive Service and Swansea Museum. These includes paintings, etchings and photography that trace the origins of industry, from the vivid slate quarries of Peter Prendergast to the vessels that transported the goods across the high seas. A particular highlight for me is the left-hand side of the room, which has been cast in shadow as if to recreate the cavernous conditions of working underground. The black walls are dotted with works from the likes of Evan Walters and Ceri Richards who depict the workers toiling away or enjoying a quick cigarette break, while towering over this section is one of the gallery’s biggest paintings – in both the literal and figurative sense. Josef Herman’s epic Miners mural, an oversized depiction of the proud Welsh miners the Polish painter encountered during his time in Ystradgynlais, spans nearly 300cm and stands in stark contrast to the haunting works alongside it from self-taught artist and former miner Nicholas Evans who, unlike some of the more romantic depictions of the Welsh miner, opted to reveal the true price paid by those who worked the mines. The result is a powerful alternative view from that of the tranquil sheep-filled lands of the great landscape painters. 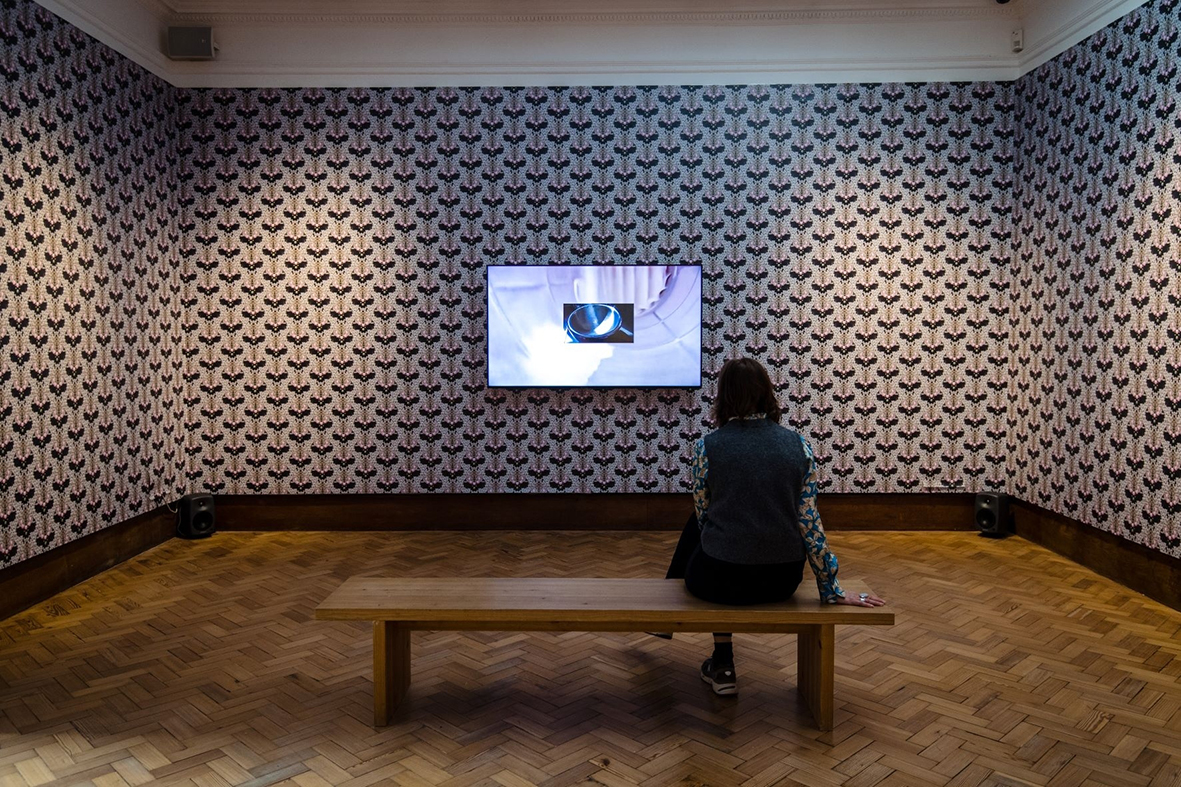 Finally, if that wasn’t enough reason to visit, there’s also the chance to catch the winner of the Wakelin Award 2021. The award is given annually to a Welsh artist whose work is purchased for the permanent collection, and in 2021 it was handed to Cinzia Mutigli, who’s multimedia installation explores “sugar addiction and Post-Colonial conversations.”