What a beautiful time of year. The days are getting longer and warmer, the trees are full of colour with so much blossom to enjoy. The bees love the blossom and are bringing plenty of pollen and nectar into the hives. At the moment we’ve got a good honey flow on. The pollens from the blackthorn, hawthorn, apple blossom and even dandelion, are all being collected and brought into the beehives. The magnolia and cherry trees have finished flowering and it’s the turn of the laburnum and japonica blossoms, just starting to emerge. The bedding plants are also beginning to grow. It’s a busy time of year for our pollinators. 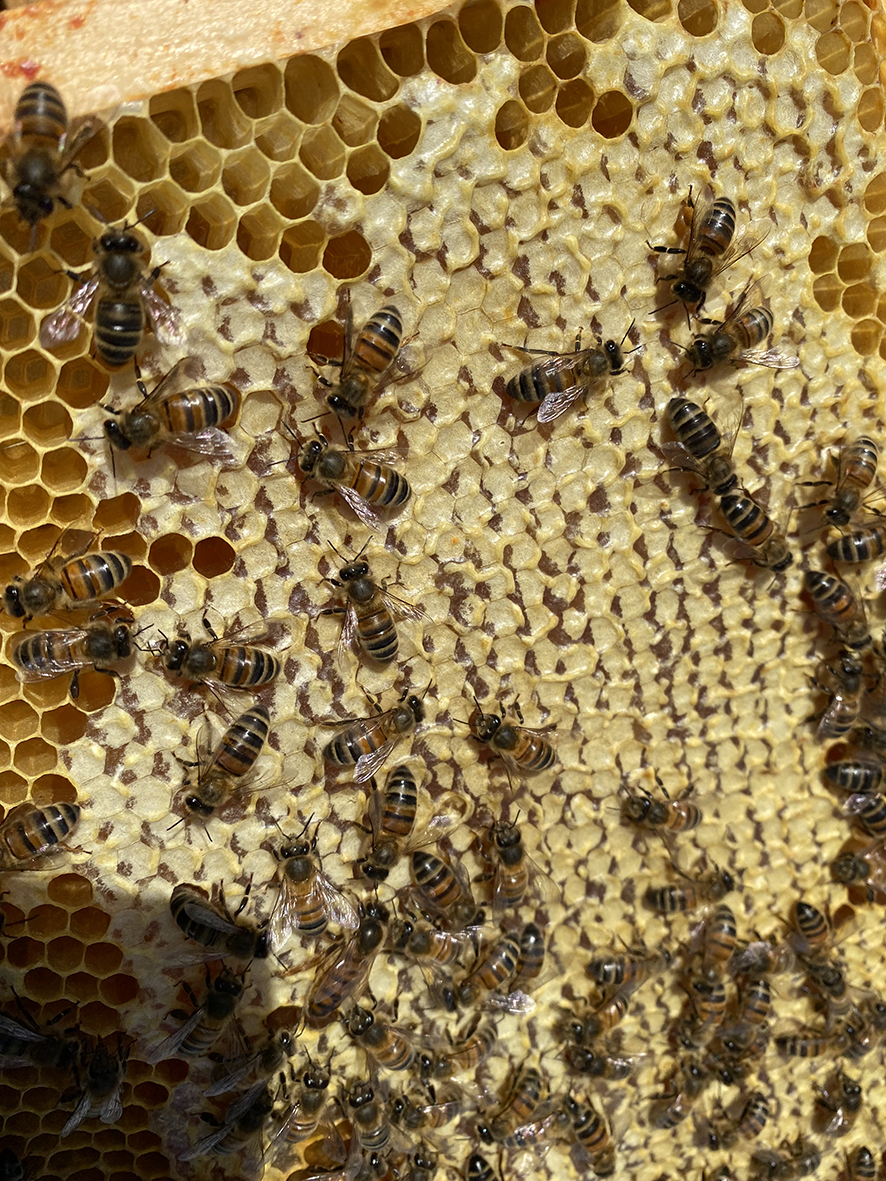 The honey stores are building up

We’ve been inspecting our hives, ensuring that the bees have sufficient space and that they have plenty of food. At each inspection we also check that they look healthy and not showing signs of distress or disease. We check we have a nice brood pattern, with lots of capped new bees coming through and also that the queens are all placing lots of eggs into cells. The queen bee will hopefully be laying lots of eggs now; up to 2000 a day. The hives can quickly become overcrowded. We’re trying to be vigilant about any signals that our bees are intending to swarm. As we mentioned in the last issue, this is the time of year that the bees are looking to reproduce their colony. We have been adding supers to the hives to provide additional space and for the bees to store the honey. However, we are merely custodians of the bees, they are always the ones in charge and will do what they want to do. If a colony of bees decides it’s going to swarm, then try as you might, you’ll only prolong the inevitable.

It can be a worrying sight for a beekeeper finding early queen cells in a beehive. These start off as what looks like an acorn cup and appear on the front of a frame, on the sides or on the comb. The position of the cell can have different meanings. If at the bottom of a frame, this can mean that the bees are going to swarm. If in the middle of the comb face, this can mean that the bees want a new queen because the one they have is either old, is not laying enough eggs, or fails to distribute enough pheromones. This scenario is called supersedure. Sometimes, a queen cell can be constructed on the top of another cell as an emergency queen if the existing queen has become hurt or damaged. Queen cups can be present quite often and are not a problem until they have an egg placed inside and a pool of royal jelly around it. Swarm cells, however, (those at the bottom of the frame), will only be formed when there is an abundance of healthy bees to reproduce the colony. When the royal jelly has been added to the cell, it is then classed as being ‘charged’. The worker bees will then build the wax on the cup to make it longer so that it can accommodate a growing queen. It will eventually end up being about the size and shape of a monkey nut, around 25mm long. On the 8th day, the cell is capped or sealed. Queen development takes 16 days; the egg takes 3 days to turn into a larvae. It is fed copious amounts of royal jelly, which has the effect of supercharging the larvae, swelling her abdomen and making her grow extremely quickly. After she emerges from her cell, it takes another four weeks for her to fully mature. She is the only female in the hive with fully developed ovaries, once mature, she will go out on her mating flight. She may have taken a few short flights prior to this to strengthen her wings in preparation for her mating flight which can last up to half an hour. The queen will fly to a drone congregation area, which looks like a cloud of male honey bees. She can mate with around 15 drones on a mating flight and she may take more than one flight. The sperm she receives during these flights will last her entire egg-laying life. About 3 days after the queen returns permanently to her colony, she will begin to lay her eggs. With the exception of swarming, she will remain in the hive for the rest of her life, possibly 5 to 6 years. 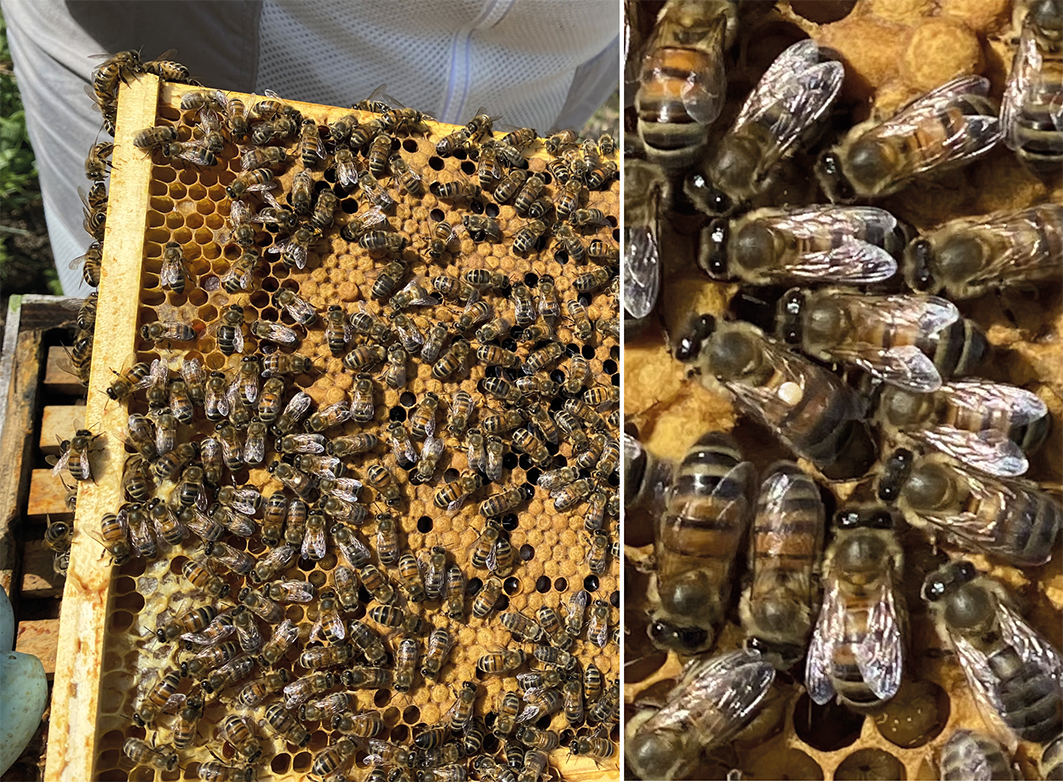 Spot the queen / Close up of the queen with her abdomen in a cell laying an egg. Note the worker bees around her facing her

It can be difficult to spot the queen in a hive full of bees, you’re looking more for the reaction of other bees around her as they follow her path, or turn in towards her as she’s laying eggs. Her abdomen is also a lot bigger than that of a worker, but even if you don’t see her, generally speaking, you know that she’s there if you have day old eggs present. To make a queen easier to spot, it is common practice to catch and then mark the queen on her thorax with a small spot of highly visible specialist paint.

Queen bee in a queen catcher, we marked her white because she’s a 2021 queen / Marked queen disappearing between the frames

Queen bees are the only ones in the bee colony that can sting multiple times without dying. When a virgin queen emerges from her brood cell, she will immediately seek out other virgin queens and kill them by stinging them. Sometimes, when they haven’t even emerged from their cell, she’ll sting them through the cell wall. When she is the only one left, she’ll then mate and start laying eggs.