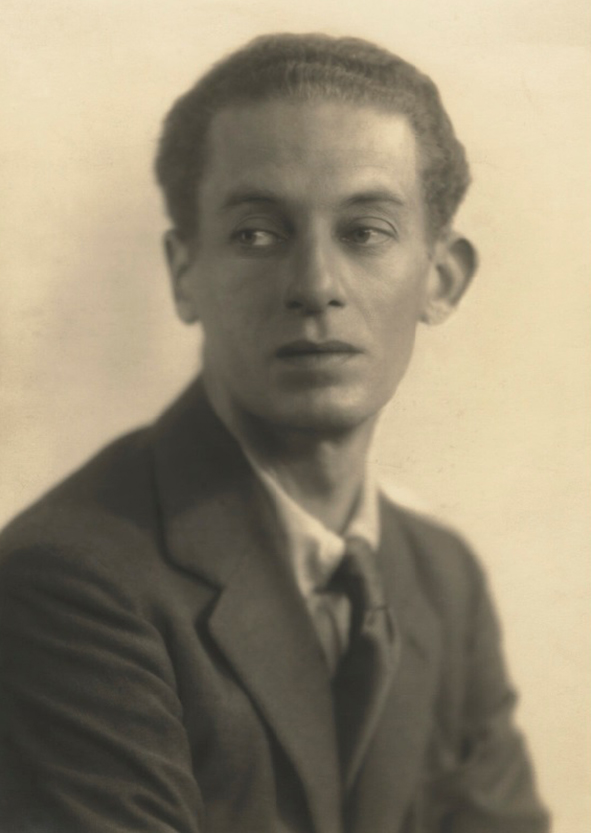 Who is the artist who painted landscapes and was a well known gardener? The answer is Cedric Morris. Who is Cedric? 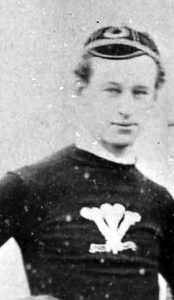 George Lockwood Morris (left) was great grandson of Sir John Morris, industrialist and the founder of Morriston. Sir John’s sister, Margaret established the Dulwich Picture Gallery. George played club rugby for Swansea, captaining the club between 1881and 1883. He was the first Swansea player to play for Wales, 1882-84. In 1889 George married Wilhelmina Cory at St. Paul’s church, Sketty. Three months before his death in 1947, George inherited the Morris baronetcy from his distant cousin, Herbert Morris.

Wilhelmina, was daughter of Thomas Cory a local JP, who lived at Sketty Hall. The Cory family hailed from Devon. Thomas’ father Richard along with his two other sons, John and Richard, established ships brokers, ship owners, coal merchant and exporters company Richard Cory & Son, in Cardiff. Cory Street in Sketty is named after the family. 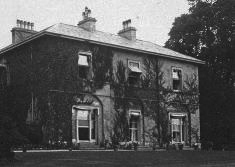 Cedric was born December 1889, at Sketty Park House; a house owned by the aforementioned Sir John Morris. This house (right) was demolished in 1973. Cedric was educated at Charterhouse School, Godalming.  Failing an army commission, Cedric set out to try his luck in Canada, undertaking a variety of jobs. Prior to the First World War, Cedric returned to London to study music at the Royal College of Music, but by 1914 he’d turned to art rather than music. During the First World War, he joined the Artist Rifles, but was deemed medically un 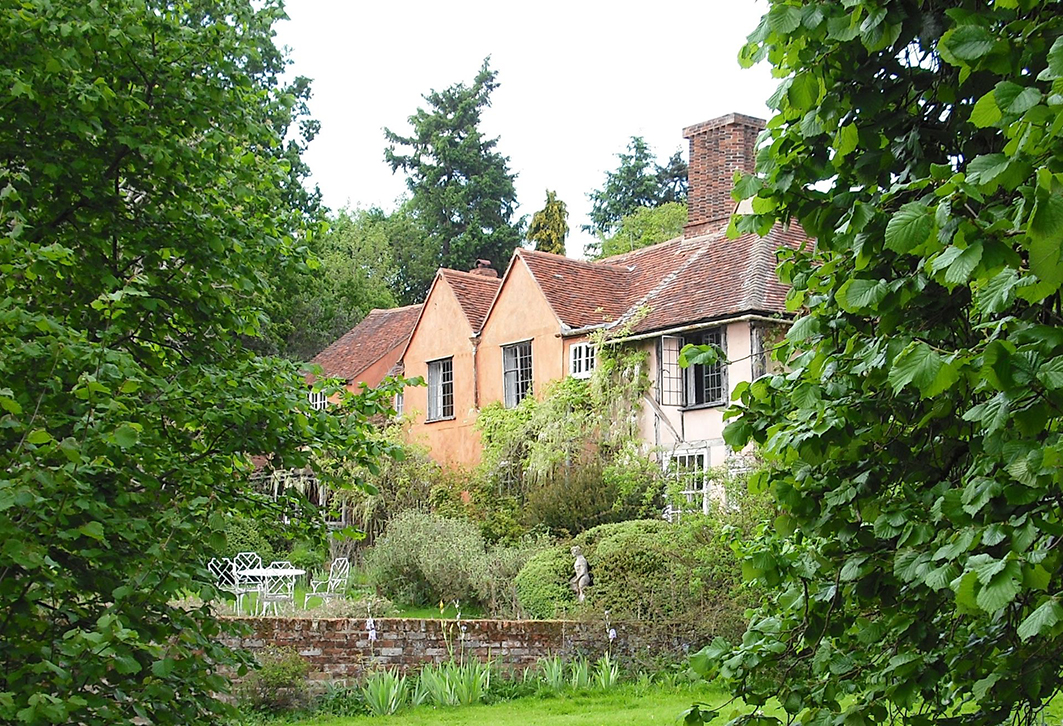 fit for service. After Armistice in 1918, Cedric met Arthur Lett-Haines and soon moved in with him and his wife Aimee. It wasn’t long before Aimee left Arthur and returned to America.

In the years that followed the war, Cedric moved to Cornwall, where he studied plants and how to paint using watercolour. After Cornwall, Cedric and Arthur moved first to Paris, then to a country life in Higham, Suffolk (Pound Farm, above left). It was here that Cedric pursued his passion for horticulture. Cedric did return to his native South Wales where he undertook painting during the Depression, and was taken by the plight of people of the South Wales Valleys. 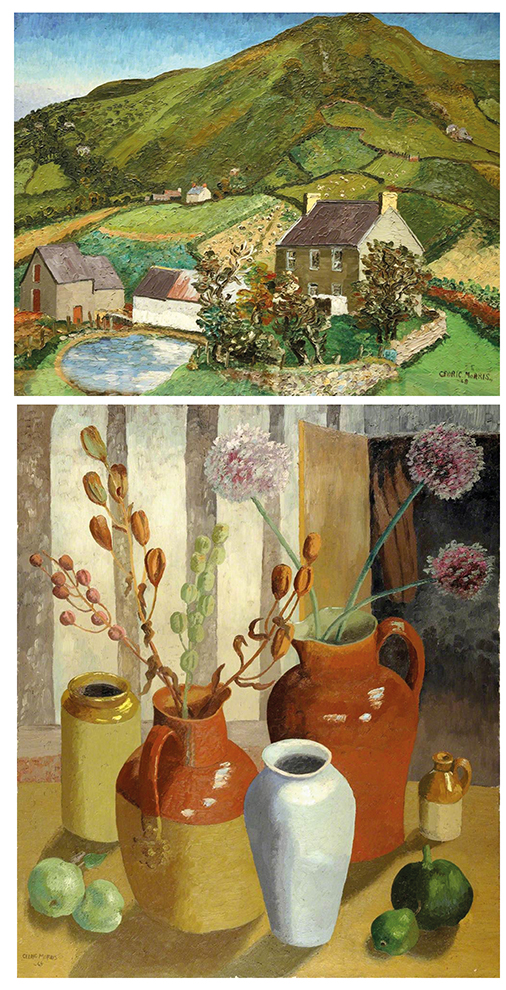 In 1937, Cedric and Arthur opened the East Anglican School of Painting and Drawing, where Lucian Freud was one of the notable students. In 1946, Cedric along with Arthur, John Nash and Roderic Barrett established the Colchester Art Society. Cedric’s style of painting was Post-Impressionist.

Cedric inherited the Morris baronetcy from his father in 1947 and in 1950 he became a lecturer at the Royal College of Art. Cedric gave up painting by 1975 due to failing eye-sight. He died in February 1982 and is buried in Hadleigh Cemetery in Suffolk (above right).

Llanmadoc Hill, (top left) 1928 and Margaret’s Pots, (bottom left) 1965 can be viewed in the Glynn Vivien. Cedric has a number of plants named after him including Papaver rhoeas ‘Cedric Morris’ (above right) and Narcissus minor ‘Cedric Morris’. 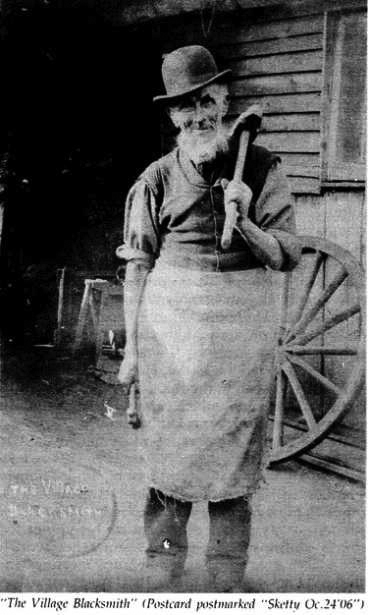 In this article I will be looking at the blacksmith who worked and resided in Sketty.  The name Sketty in Welsh is Sgeti which itself comes from the Welsh Y Sgeti – “The Sketty”.  However, the name has been interpreted as a corruption of “Ynys Ceti” – “Ceti’s Island”

We begin this article at 65 Vivian Road, the site of Sketty Library. This year it celebrates its 99th birthday. The architect was Ernest Morgan, whose other work includes the original Swansea Police Station in Alexandra Road, Mayhill School, Swansea Technical College extension and the residential area of Townhill. The library will feature in a future article later in the year, so today we will turn 180 degrees to face Mike’s Autos, which is a garage today, but was previously the Sketty blacksmith’s forge.

The blacksmith in question was George Blundell.  So, who was George? We have to look at the article “Death of Sketty “Grand Old Man”” published in The Cambrian dated 4th January 1907, to establish who George was.

In April 1826, the year of George’s birth, his family home was situated on land that is now St Paul’s church. The church was built in 1850 for the Vivian family, after the death of Henry Hussey Vivian’s first wife, Jessie Dalrymple Goddard. The architect of the church was Henry Woodyer. There is of course no evidence of this house as the first map to have been published by Ordnance Survey was during 1897.

George was the son of Robert Blundell and Ann Sambrook. They had 11 children of which one was George. Robert was employed by John Henry Vivian as coachman, and George aged 13 accompanied his father from Singleton to London, to be present at the coronation of Queen Victoria on 28th June 1838.

George had a variety of employment and apprenticeships, the last one working at Vivian’s Works at Tailbach. In 1843, George returned to Sketty where he opened the Smithy under his own account, and without any opposition, George became known as the “The Village Blacksmith”.

Despite his lack of education, George was a fluent public speaker and in 1844, whilst intoxicated, George dropped into the National School, it is here that he met the Reverend Charles Cook, vicar of Holy Trinity Church, delivering a temperance address. George was induced to sign the pledge.

Following the completion of St Paul’s church in 1850, Henry Woodyer built Stewart Hall in 1853, which became the local school.

Following signing the pledge, George became an ardent temperance advocate. He was associated with Rev. M. E. Welby and his wife and Mrs John Crow Richardson, in their fight against drink.

George married Mayzod Davies in 1853, and they went on to have 10 children. The family resided in one of the cottages located at Cae Banc – home to the HQ of Bay. Mayzod died in 1887, and twenty years later in January 1907, George died aged 80 at 15 Margaret Terrace (Vivian Road) Sketty, home of his daughter. His funeral was a public event, and his body was buried at Bethel Chapel burial ground.

If you think that your house has an interesting past, please drop me a line. 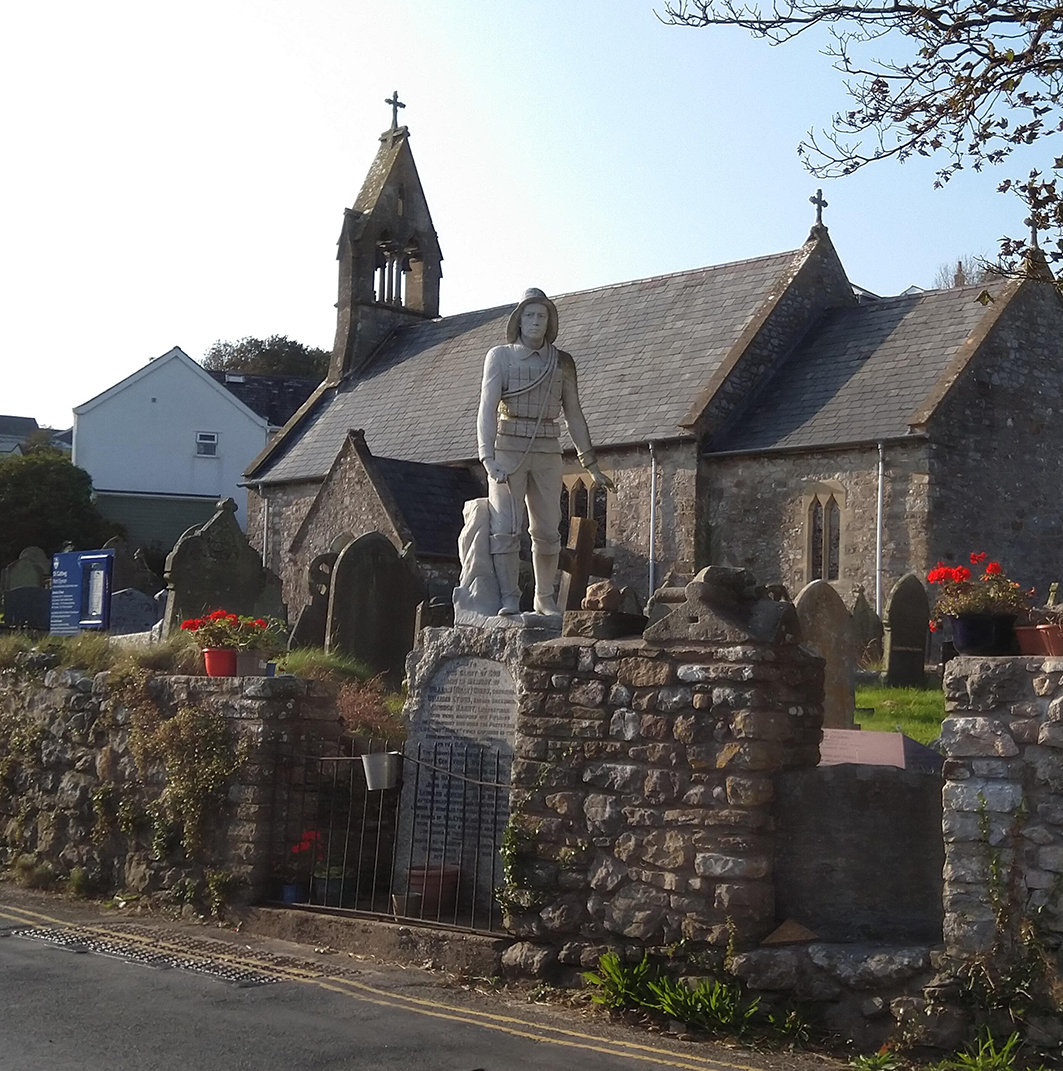 Following on from Bay’s Ian Bateman’s Gower Pilgrimage Walk (Part IV), – see last month’s magazine – his rendezvous was St Cattwg’s church, Port Eynon. The memorial situated in the corner of the churchyard commemorates the life-boat crew, who lost their lives on 1st January 1916. The lifeboat Janet had a crew of 13, and whilst attempting to assist the Glasgow steamer SS Dunvegan, the lifeboat capsized twice and those lost were William Eynon, George Harry and William Gibbs. Only the bodies of 2nd Cox Eynon and lifeboat man Harry were recovered and later buried at St. Cattwg’s. The sea is the resting place of Cox Gibbs. 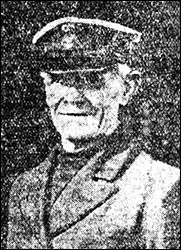 William Gibbs is said to have been the person the statue is modelled on and is the work of Mr Brown, sculptor and Mr C. E. Schenk, artist and engineer employed by Swansea Harbour. Schenk was one of the founding members of Swansea Arts Society, which was established in 1886 and is one of the earliest societies in Wales. The statue was unveiled in August 1918.

Everyone likes a little mystery, and in December 1914, The Cambria Daily Leader published an article regarding the burial of a veteran of the Indian Mutiny, 1857-59 at St. Cattwg’s. After scouring the records with help from the West Glamorgan Archive Service, there certainly doesn’t seem to be a said burial at that time. The mystery of the veteran remains.