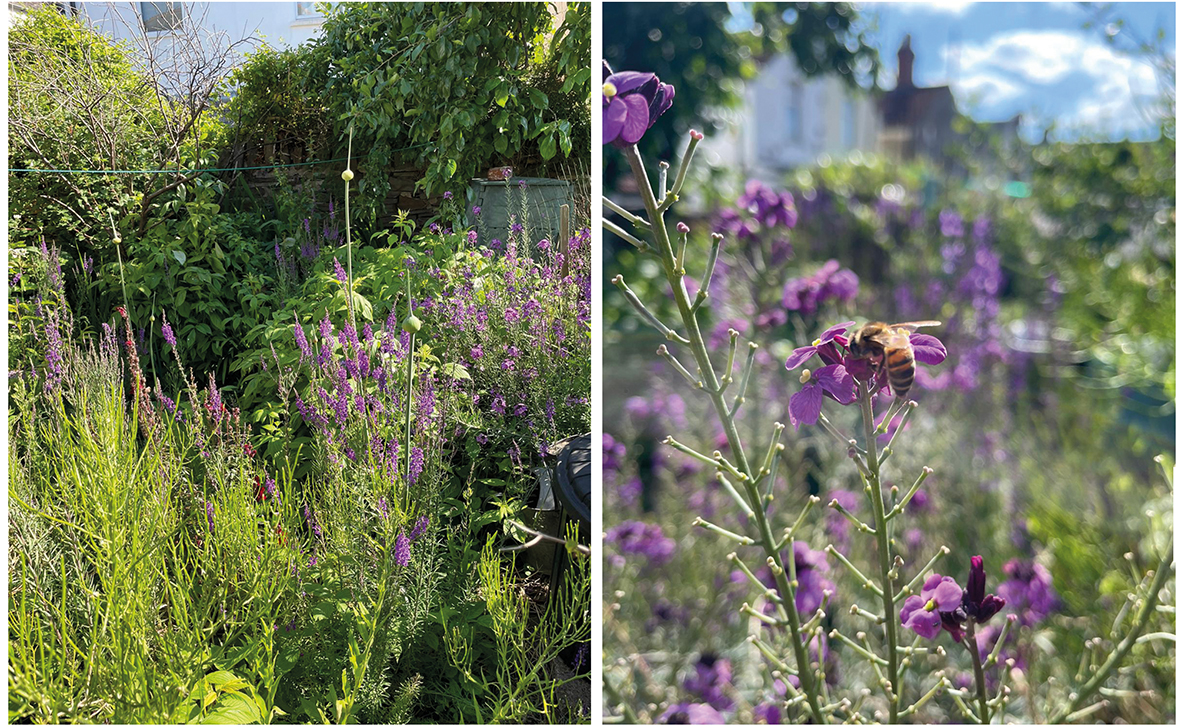 An overgrown urban garden is a lovely haven for our bees and many other pollinators.

The bees have been busy building up the stores of honey, visiting all of the gardens in bloom, the forests and patches of wildflowers.  They are picking up the pollens and nectar and bringing their bounty back to the beehive, the pollens to feed the bees and brood and the nectar to make the honey.

We were quite fortunate to try some of our honey on a recent inspection, which had been stored within some brace comb.  This spring honey was very floral and had a subtle pineapple taste which was extremely nice and a very welcome treat.  Although the bees will be foraging from a number of different plants, this hint of pineapple flavour probably comes from the bees foraging on wild chamomile, also known as pineappleweed or mayweed.  This is in season between May and October and is quite prevalent along footpaths, field entrances and roadsides.  We can also forage on pineapple weed, the flower heads smell and taste strongly of pineapple and the leaves can be used in salads.

Brace comb on top of a frame with honey, the bees are eating the exposed liquid gold / A busy landing board, with bees taking nectar into the beehive / Wax glands on the abdomen of a worker honey bee.

We found a few areas with brace comb within this hive.  The bees had built some comb over a feeding hole when there shouldn’t really have been any comb there at all. This is called brace comb or burr comb. The purpose of the brace comb is to minimise the space within the hive.  The ‘bee space’ is around 6-9mm and this is the space needed for the bees to circulate around the hive.  A space less than 6mm will be filled with propolis, anything bigger will usually be filled with brace comb. This bees will use the extra comb for brood, food or honey depending on its position in the hive but it isn’t a welcome sight for the beekeeper.  It can join frames together making inspections difficult, even joining to the frames above or below. The worker bees make the wax by huddling together and increasing the temperature in the beehive to at least 33C. This enables the wax glands in the bees’ abdomen to convert the sugars in the honey into beeswax. This oozes through small pores to form scales of wax on their abdomen. 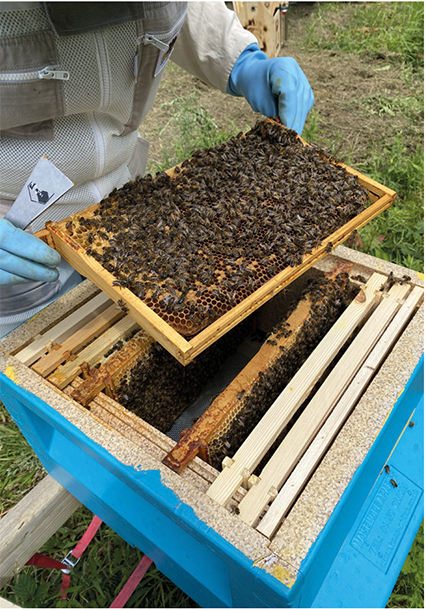 We continue to check that the bee colonies are healthy and have good food stores in the hive.  We always look out for any signs of disease, which thankfully our colonies are free from. We check to see that the queen is present, though queens are elusive and move away from the light. If we aren’t able to see her during an inspection, then a check that we have eggs and larvae through to capped worker bee cells in the hive is confirmation that she is there.

The hives are in good health now and very full with bees – there should be around 55 to 60 thousand in a hive unless they’ve swarmed.  Swarming will deplete their population by around 25 thousand. We were lucky enough to pick up a couple of swarms recently. One was a nice and easy capture in a bramble bush. A little bit of nifty cutting with the secateurs enabled us to separate the branch with the swarm and place it into a nucleus box. We gave them a good feed with sugary water and moved them to our apiary.  The other swarm was quite a lot more problematic. The bees had congregated in a gutter, but also within a down pipe and underneath the roof tiles on somebody’s house. It took an age and a few attempts to locate the queen and successfully move her into a suitable box. After a couple of weeks both swarms are doing well, they’ve accepted their new homes and the queens have started laying eggs nicely. We will be keeping a careful watch over them to ensure that they survive and remain healthy. Unfortunately a large proportion of bees that swarm will die. Fewer than 25 percent of swarms will survive their first year, due to starvation or the effects of insecticides and environmental toxins. However, it’s a necessity for the survival of the species. 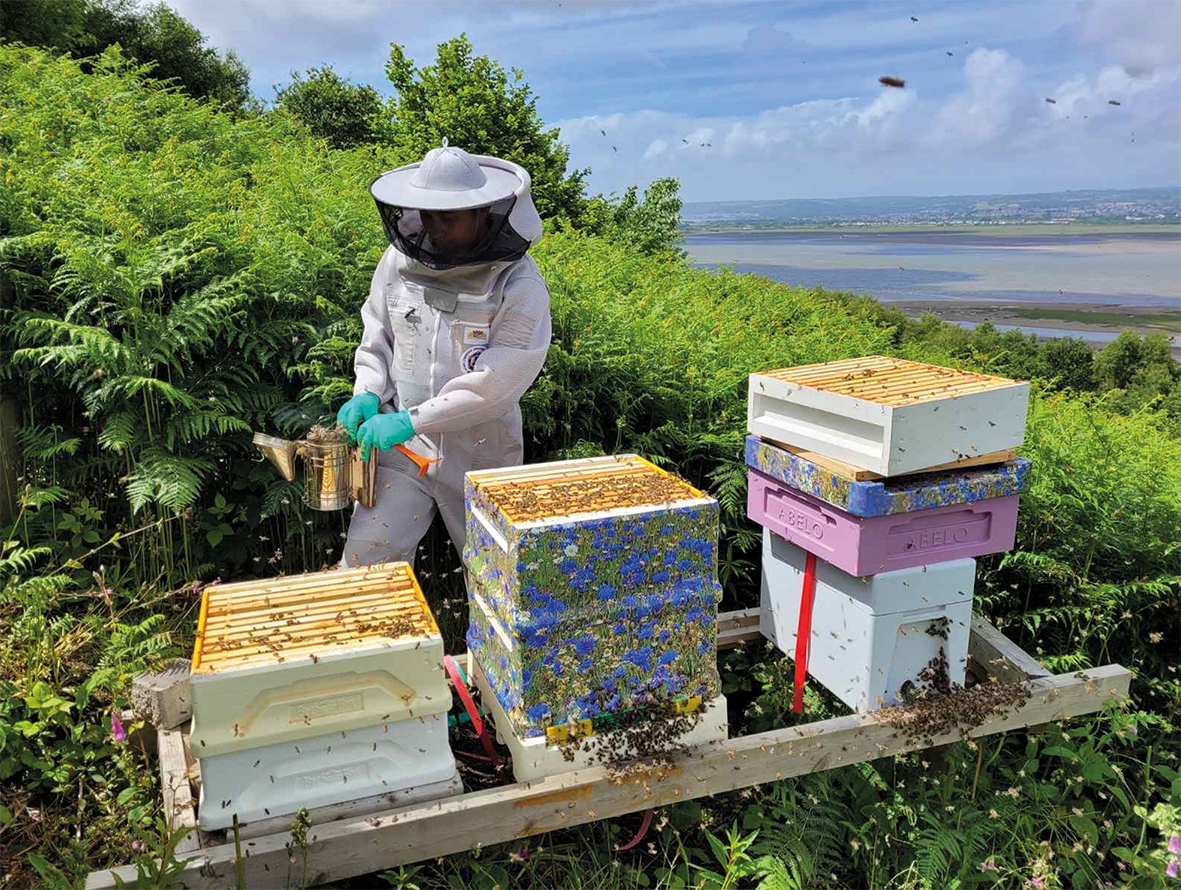 A thorough Inspection of a very full beehive

At this time of year there’s a spell that’s known as the June gap, when there’s a reduced amount of forage available to the bees and other insects. This is partly due to an increased amount of grasses and dandelions that are growing and the fact that they actually suppress the growth of other flowers, which the bees and other insects forage on. We have planted some lavender and borage in close proximity to the hive as an emergency food source.  Other plants which are in flower now which would also be welcome are white clover, herbs such as thyme, coriander and rosemary, some geranium and allium.  It’s at this time that we need to be particularly vigilant and ensure that the bees have enough food within the hives to stop them from starving. So at our weekend inspections, we have topped up the supplementary feed in preparation, although it appears that our bees on Gower are finding anything but a lack of forage, having stored plenty of pollen and nectar to see them through.

Worker honey bees flap their wings 230 times a second. They can visit 50-100 flowers in a single foraging flight and can carry pollen and nectar equivalent to 80% of their body weight.